In April we had several posts (see links below) about Johnson County Circuit Court Judge "Wild Bill" Pearson and the results of his criminal DWI case and the investigation conducted by the Arkansas Judicial and Disability Commission.

He basically received a slap on the back, errr..... hand.  That's how the Good Ole Boy System works. 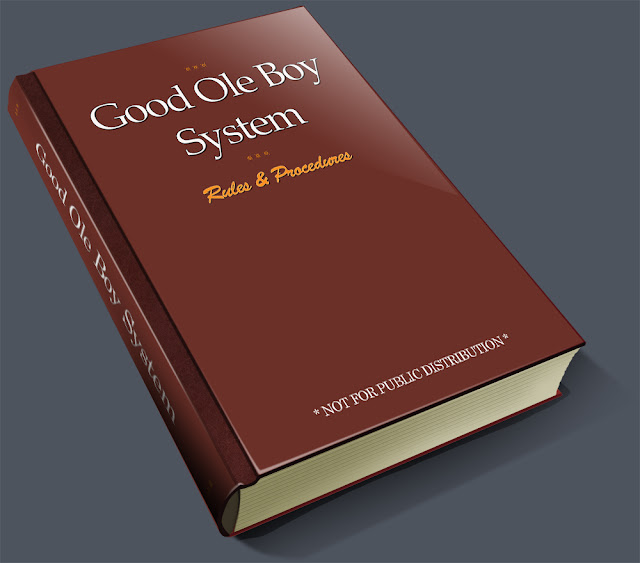 Wild Bill was not the only Johnson County public employee that recently had some legal problems with criminal behavior.


Two Johnson County Sheriff's deputies were accused of sexual assault, in different instances, one will be serving six years probation (more of the Good Ole Boy System at work) and the other... we'll get to that in a minute.


Instead of being fired by Sheriff Larry Jones, they were graciously allowed to resign, a move many law enforcement officers take when accused of a crime in a means to escape accountability and prevent the public from having information about their wrong doing (if fired, documents concerning their termination and what they did to get fired is subject to release under the Arkansas Freedom of Information Act; if they resign it is not).


No wonder public opinion and confidence about law enforcement organizations and officers is at a all time low.

Retford is a piece of work and a prime example of how broken the law enforcement certification system is in Arkansas (more on that later in the post).


Retford was accused of engaging in deviant sexual activity while in a deputy uniform in Sept. 10, 2016.

What exactly did Deputy Retfort do?  Well, take a look at the affidavit for his arrest. 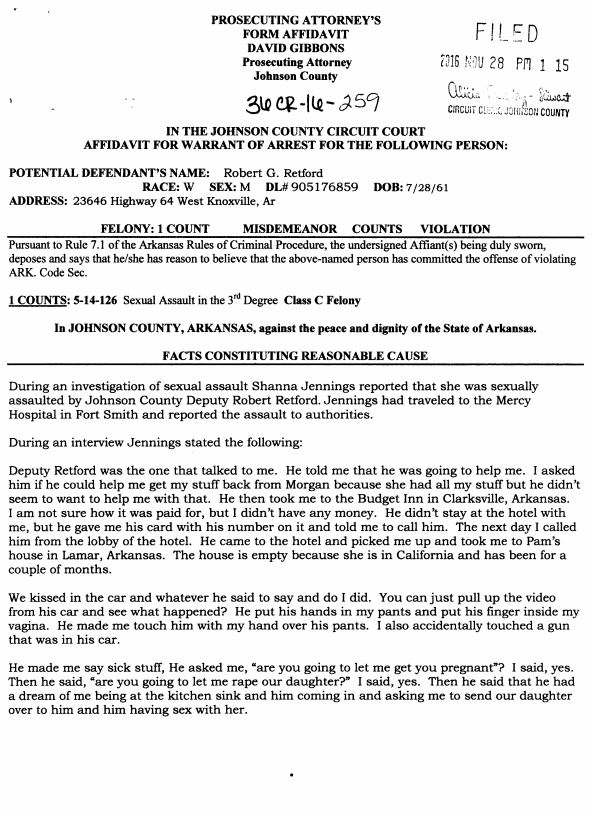 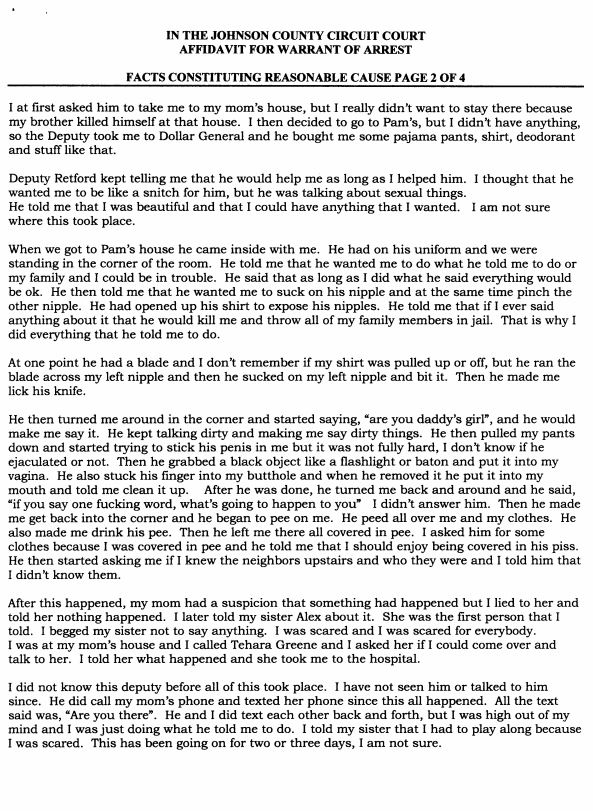 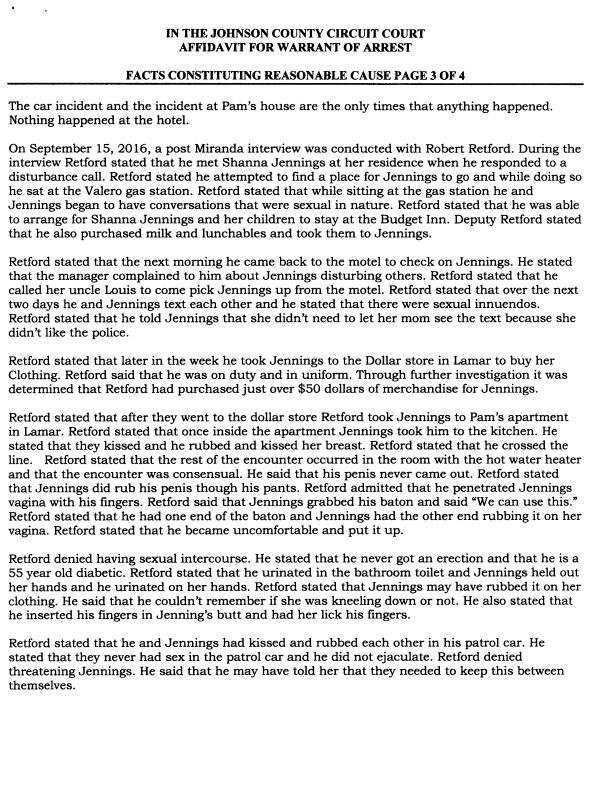 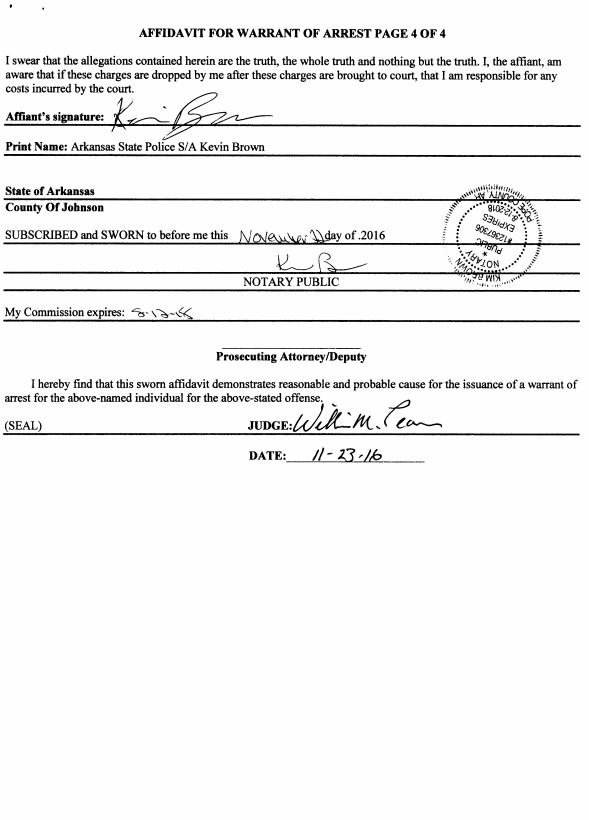 Retford was facing up to 10 years in prison.

So he worked out a negotiated plea deal in which he would plead guilty, have to register as a sex offender and only have to be on probation for six years.

That Good Ole Boy System membership has its perks. 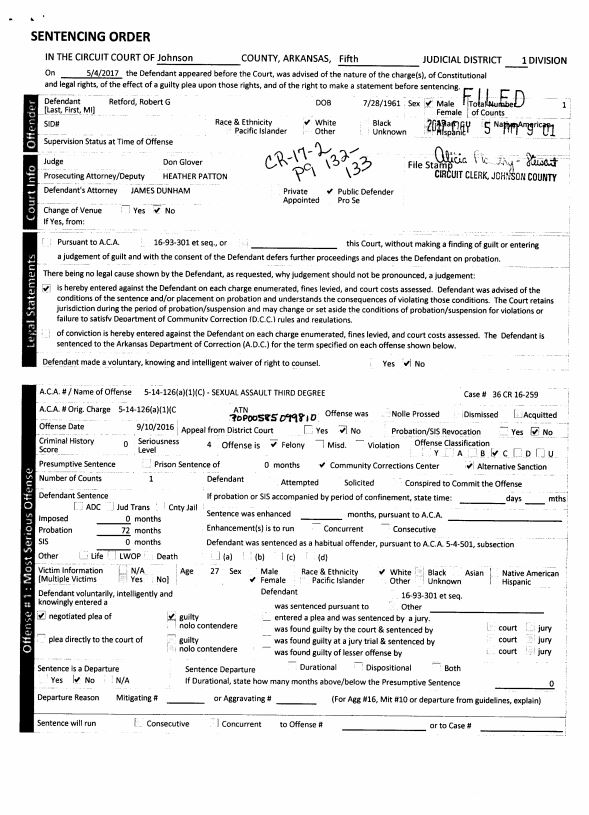 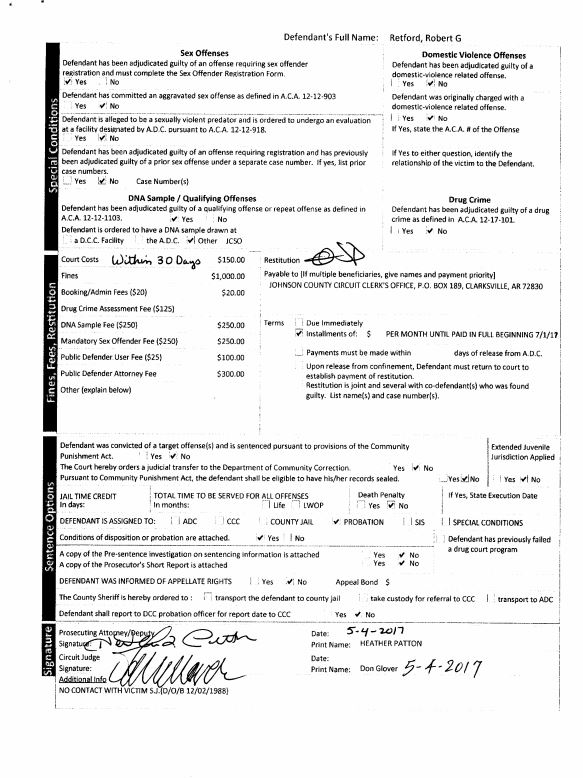 Not a bad deal for $100.  That's how much it cost Retford to get a public defender. 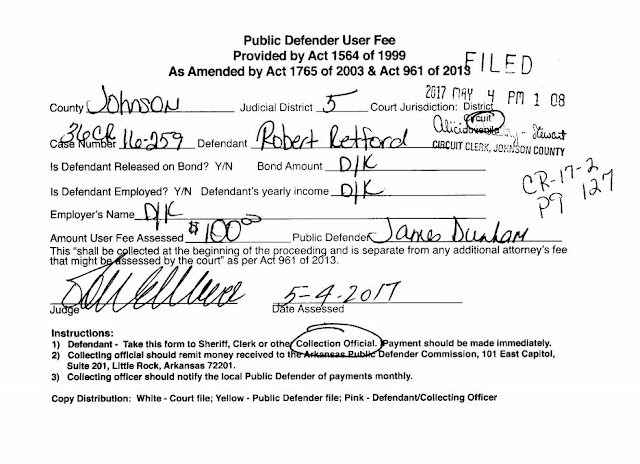 According to news reports, Prosecuting Attorney David Gibbons said the sentence was fair as Retford had no prior criminal records and that the victim was fine with Retford only getting probation.


The voters in Johnson County need to elect a new prosecuting attorney. While they are at it they need a new circuit court judge too.

While Retford may not have a previous criminal record, he certainly had a sketchy career in law enforcement. 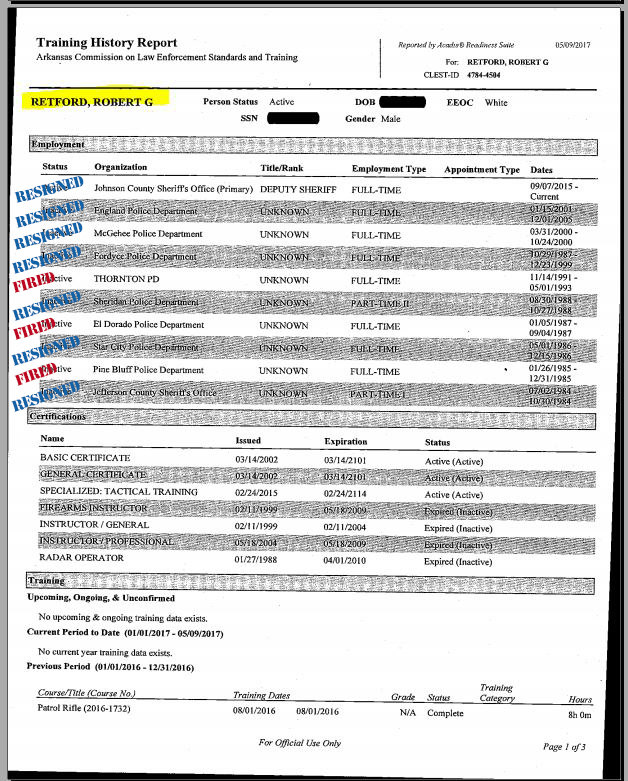 As you can see Retford was fired three times and he resigned six other times (not including his most recent one from JCSD). Remember what we said about law enforcement officers resigning -
"a move many law enforcement officers take when accused of a crime in a means to escape accountability and prevent the public from having information about their wrong doing (if fired, documents concerning their termination and what they did to get fired is subject to release under the Arkansas Freedom of Information Act; if they resign it is not)".


We were not able to get a lot of details as to why he was fired so many times. 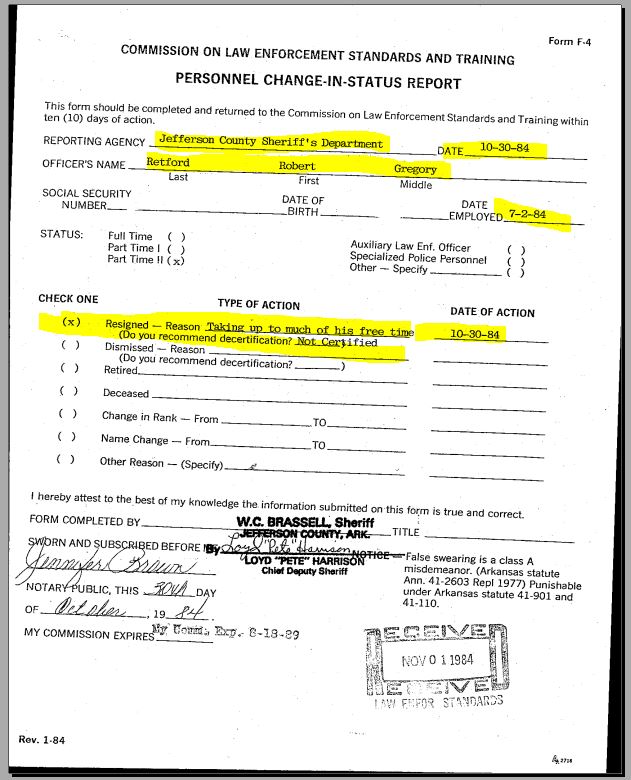 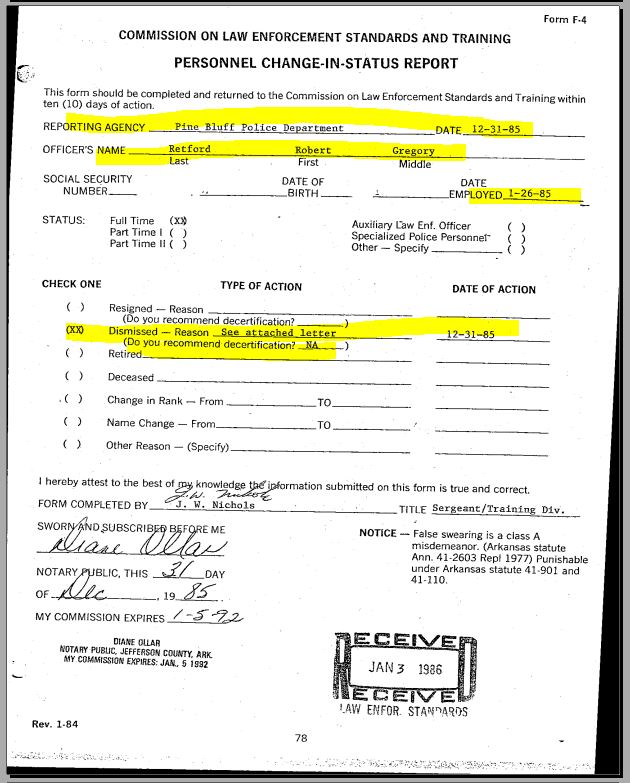 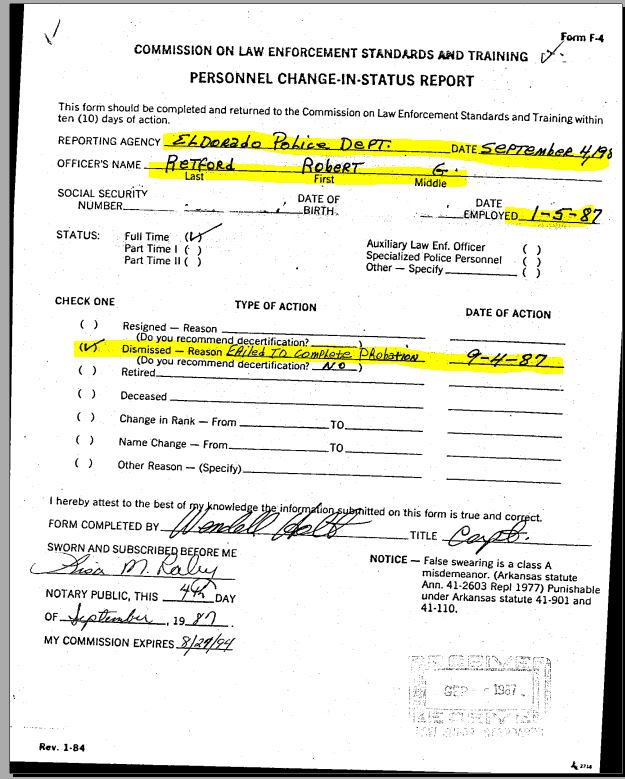 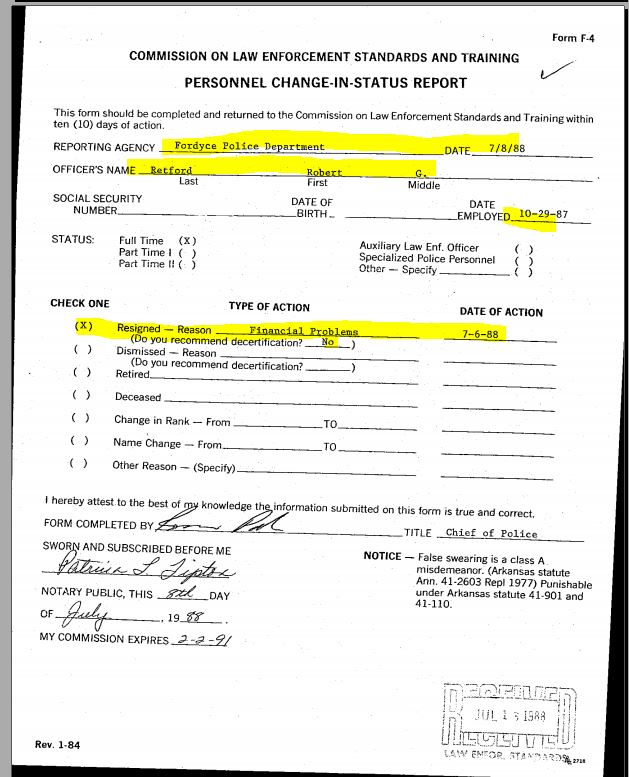 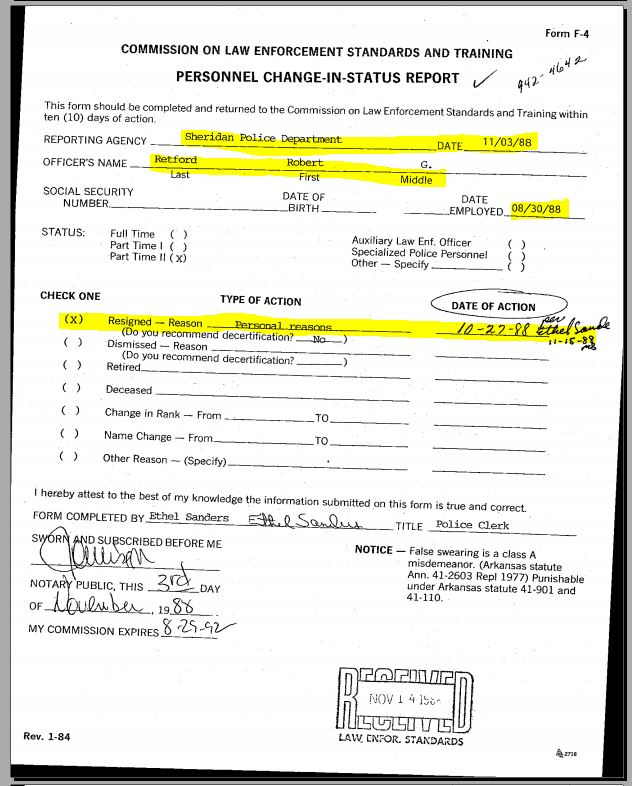 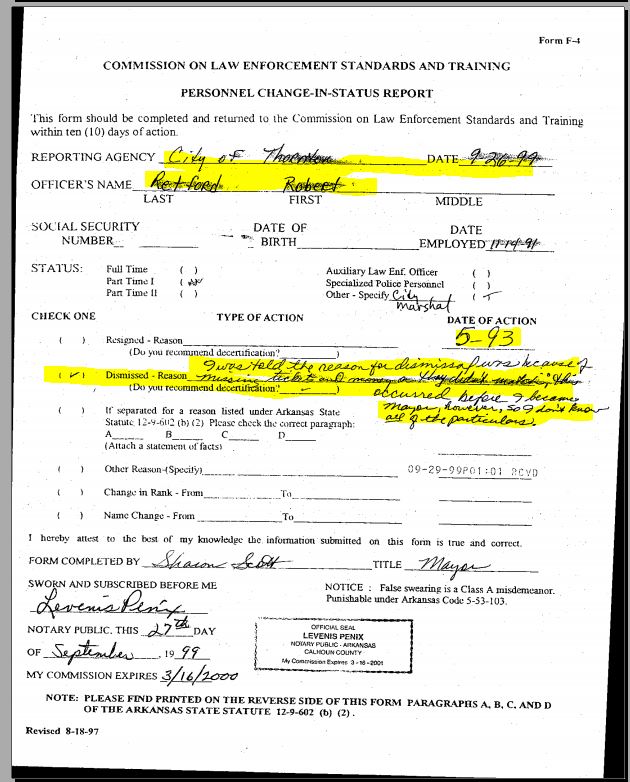 
In March of this year, Wood, a married man, was reported to have been in a sexual relationship with a female named Carrie Box beginning back in 2016. Wood was also reported to have used his position as a deputy to provide favors to Box.

Gibbons requested that the Arkansas State Police look into the matter.

Let's take a look at the report that the ASP sent Gibbons. 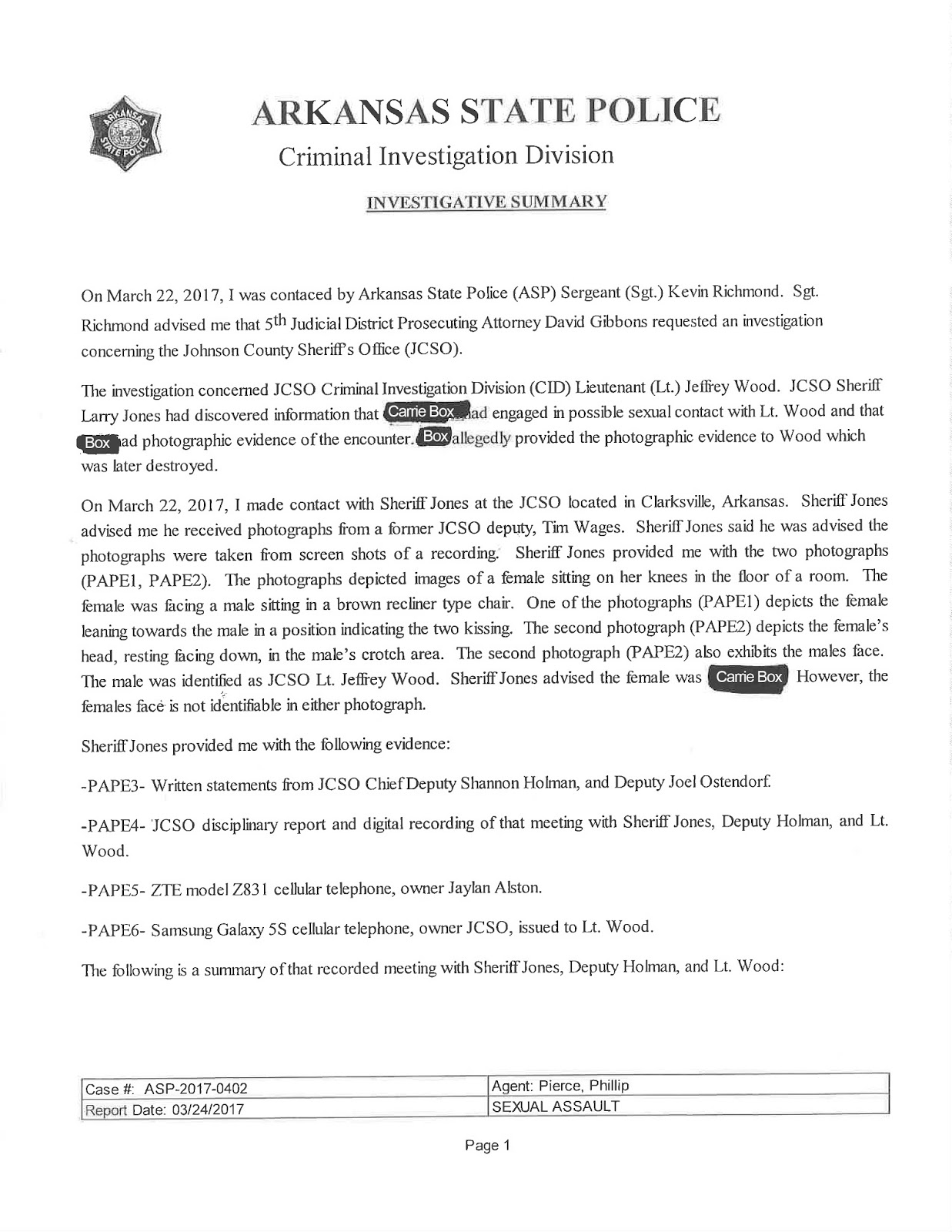 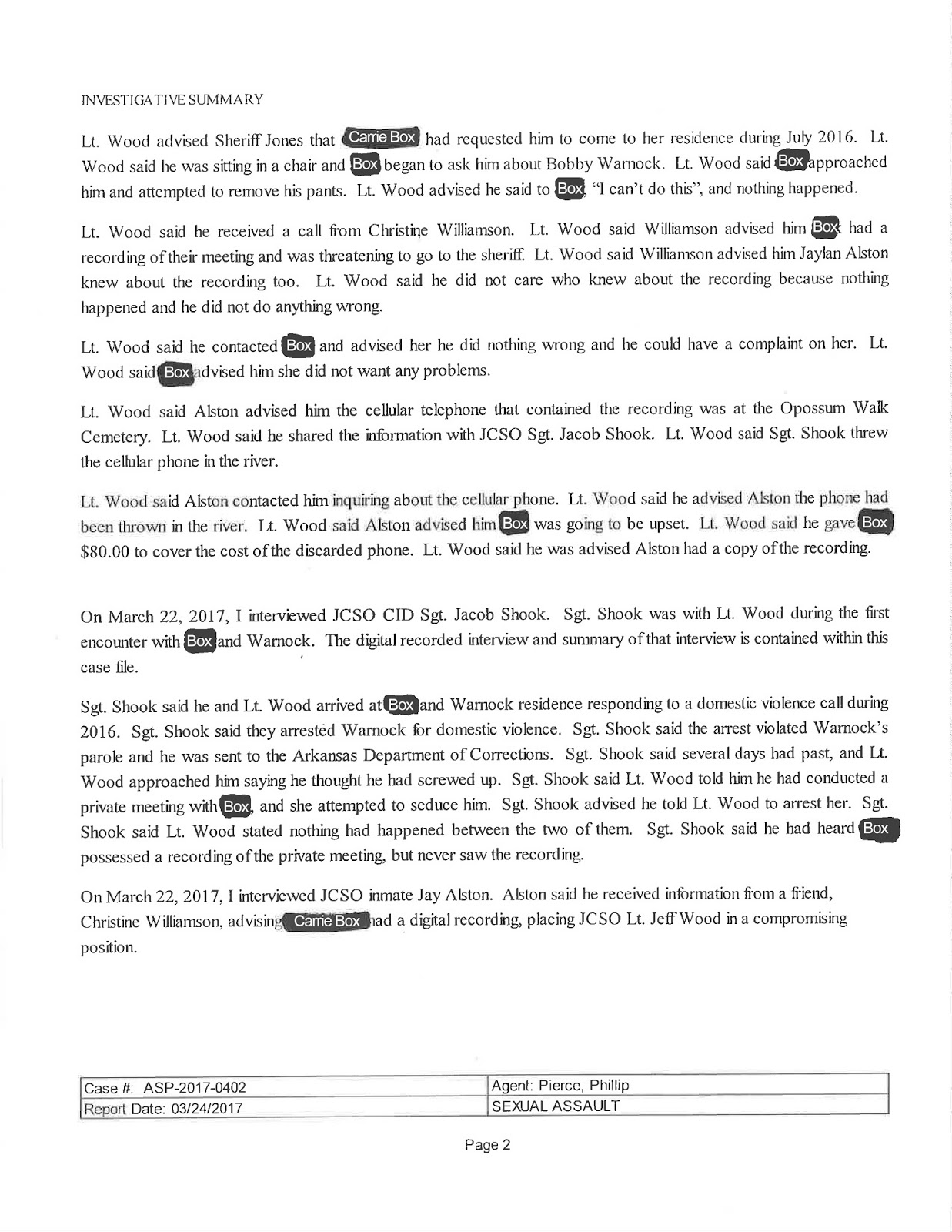 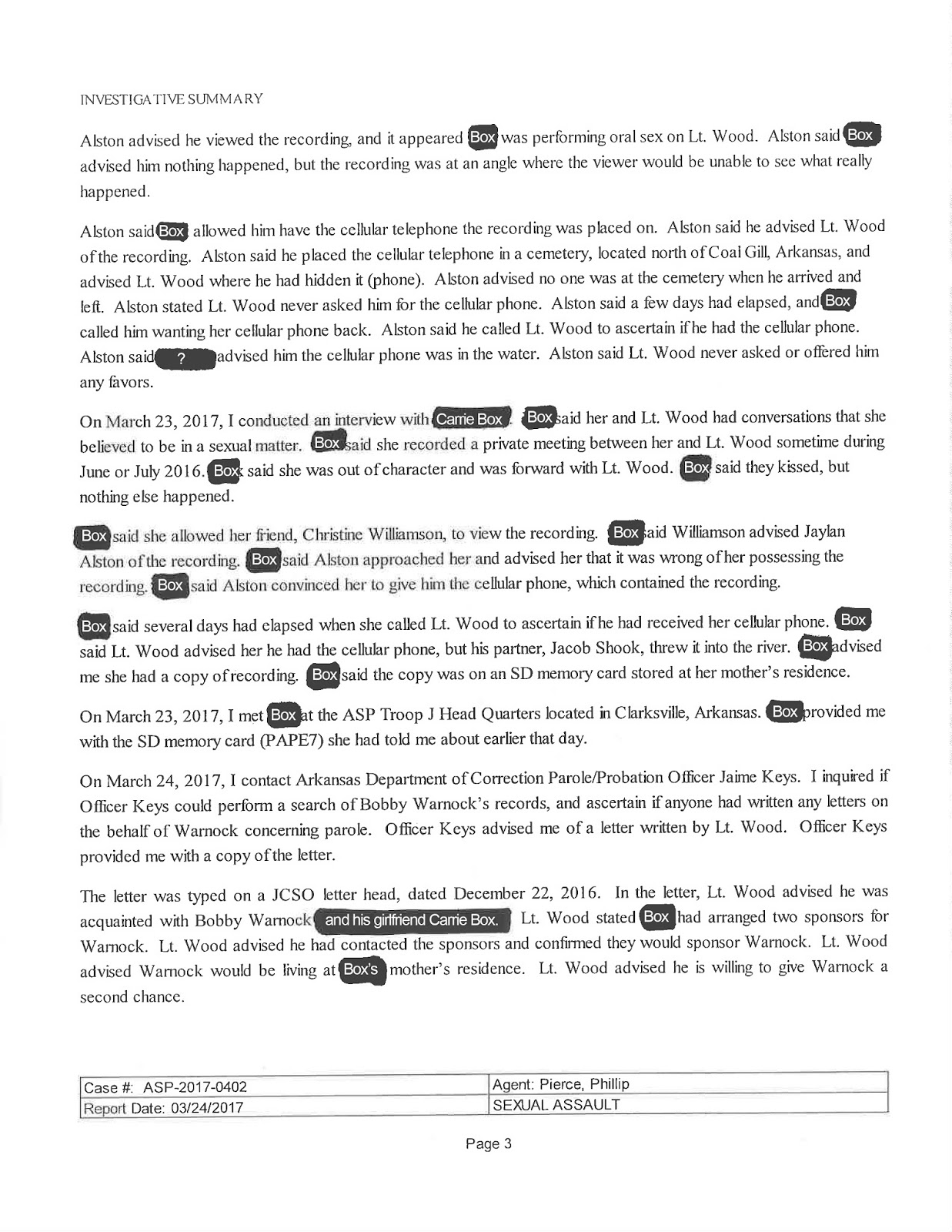 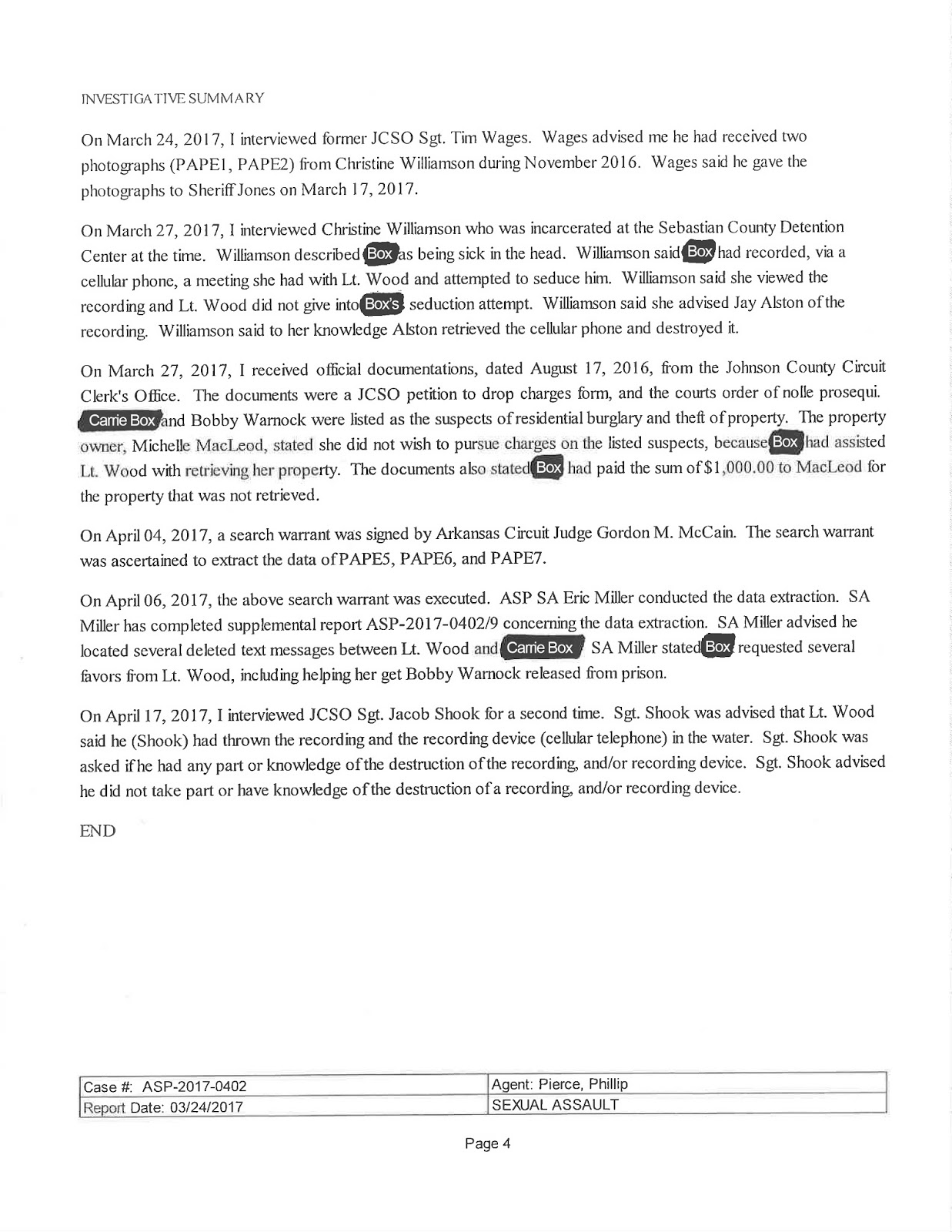 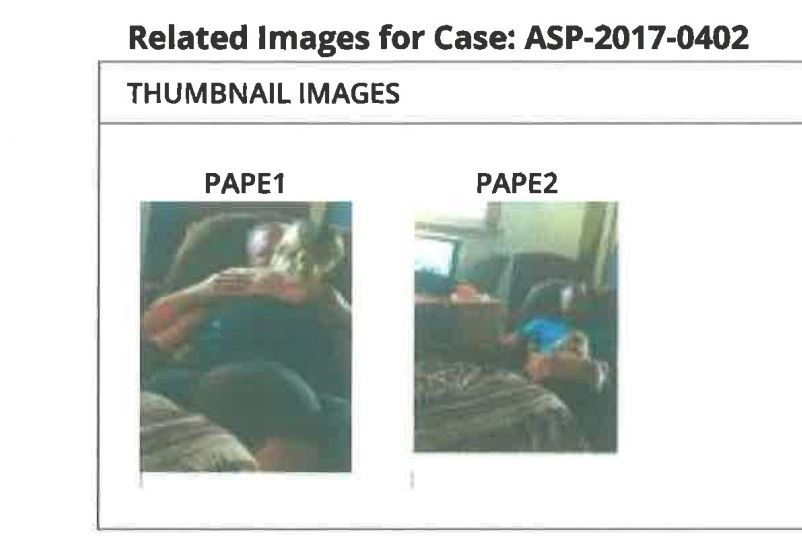 Wood did write a letter to help get Box's boyfriend paroled.


So David Gibbons, the fine Prosecuting Attorney, did not consider the facts or evidence that Wood was involved in some hanky panky with Box and that extramarital activity resulted in some questionable favors for her.  Gibbons did not think that Box head on Wood's crotch was of concern, and the fact the Woods had her cellphone destroyed (the one with all the pictures of them doing the nasty) and then bought her a new one was suspicious.

To make good on her scheme to get her boyfriend out of prison, Box told ASP investigators that she and Wood never had sex.  After all a deal is a deal.

Gibbons determined that there was not enough evidence to get a conviction and dropped the matter. 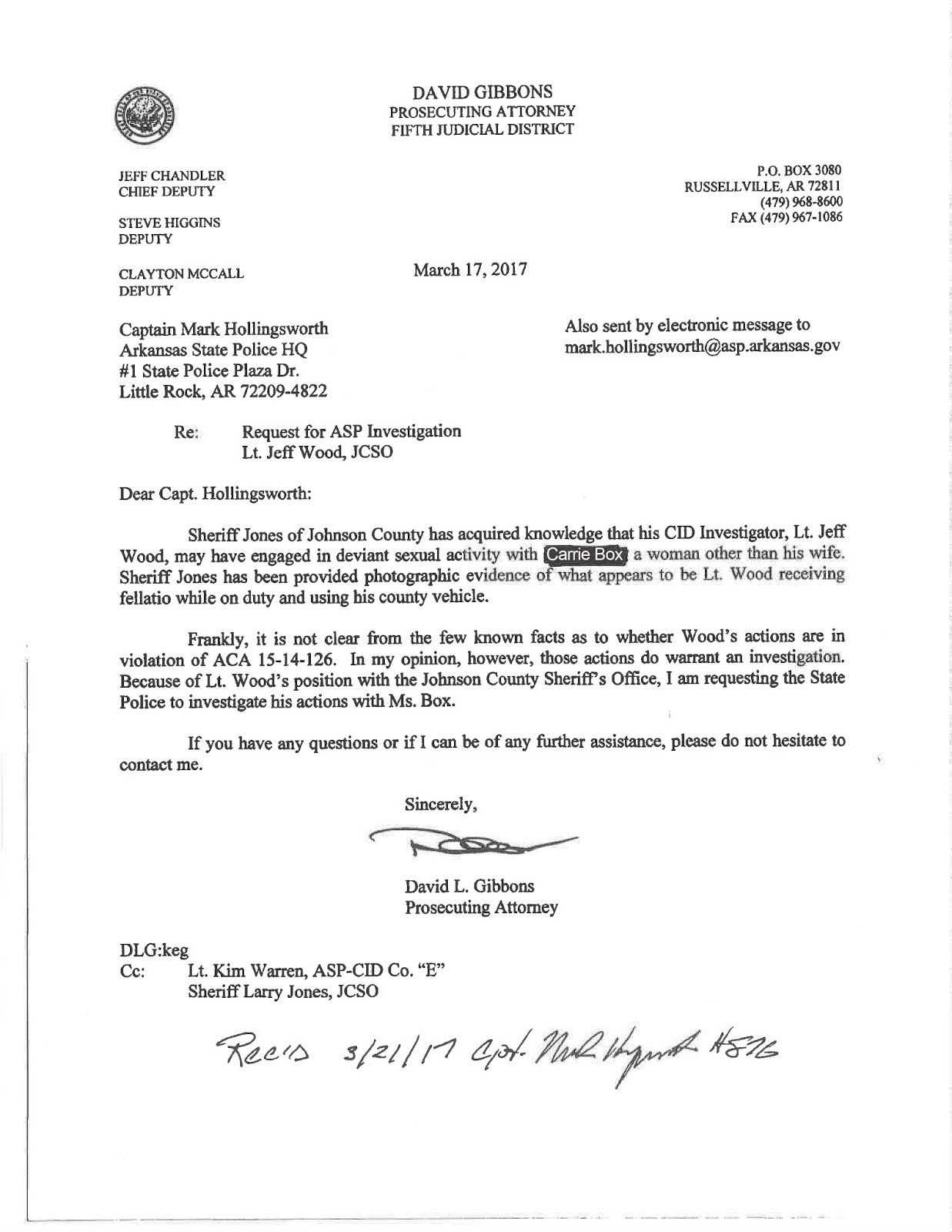 CLICK TO VIEW THE ENTIRE ASP FILE ON WOOD


Not too long after Wood resigned from the Johnson County Sheriff's Department, he landed another job in law enforcement, at nearby Franklin County in their CID Unit.  The cycle continues.


These scumbags along with tainted ABC Enforcement Director Boyce Hamlet, are prime examples of why the Commission on Law Enforcement Standards and Training needs an overhaul.  Other licensing agencies (medical, dental, insurance, etc.)  have procedures for the public to make complaints about individuals that are licensed or certified by that agency. CLEST needs to be empowered to do the same. That empowerment would prevent the passing on from one agency to another crooks and creeps that have no business wearing a badge and carrying a gun and being in a position of authority.

Another issue with the CLEST and certification is that before any law enforcement agency hires an individual to be an officer, they are required under Arkansas Code Annotated §12-9-602 to do the following:

This almost never happens. In all the files we have obtained from CLEST we have never found such a request by an agency. Never, not one.

Law enforcement agencies are also required in this same statute to:

The Personnel Change-In-Status form (F4) has it clearly stated that the form needs to be sent in within 10 days any changes.

That is often not done as well.  One file we obtained from CLEST had an F4 form submitted a couple of years after a termination.

In the Retford case, Sheriff Jones failed to follow the law and this was his excuse:

Oh, we almost forgot to tell you that Judge Wild Bill Pearson had his hand in these cases.  Maybe that explains what he said to deputies when they were trying to book him for that DWI charge.  Wild Bill told the deputies that he didn't need to tell them who he was.  Wild Bill knew that the deputies had knowledge that he took care of the members of the Good Ole Boy Club and he expected the same in return.

That also explains why there was no mug shot taken of Wild Bill and he was permitted to carry on like he did.

Thanks to the reader from Clarksville that sent us a letter about Wood  last week.  As you can tell, we had been working on this for a while before we received your letter. 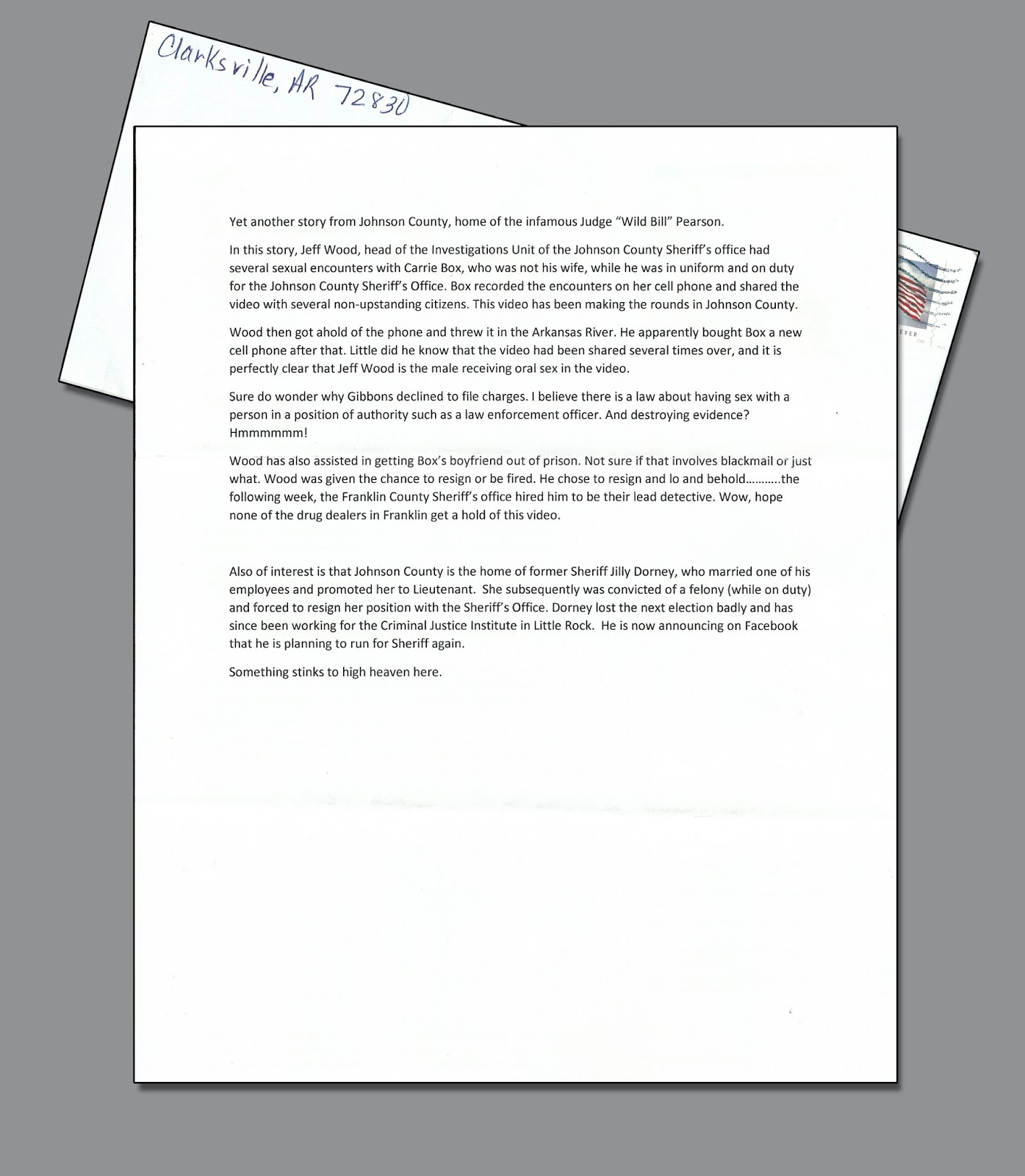