Judge Alice Gray ruled today that Jacksonville Police Chief Geoffrey Herweg be removed from his post pending the outcome of a trial.

Judge Gray issued a temporary restraining order preventing Geoffrey Herweg from serving as police chief and from receiving a paycheck from the city. 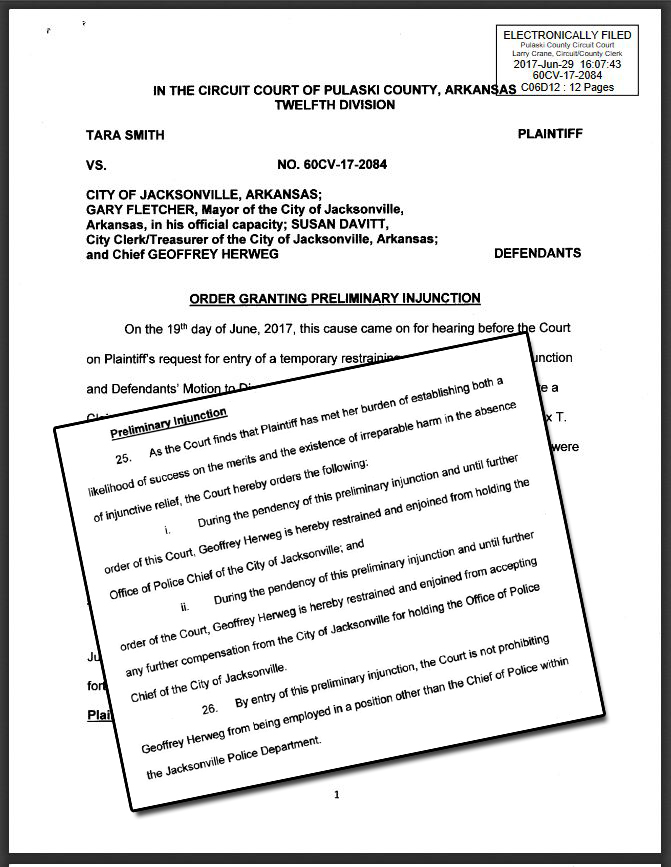 The ruling came after arguments earlier this month before  in Pulaski County Circuit Court on a lawsuit filed in April by Jacksonville Alderman Tara Smith.

Smith contended that the police chief was legally disqualified from holding the post because of a previous misdemeanor conviction.

Back in 2002, Herweg pleaded guilty in Texas to a misdemeanor charge of giving a false statement to police and failing to report an accident. Herweg was appointed as Jacksonville police chief in April. Mayor Gary Fletcher knew about the misdemeanor when he hired Herweg.

An affidavit states that Herweg crashed into a house on Christmas Eve in 2000, abandoned the vehicle and later lied about the wreck to authorities. He was a law enforcement officer at the time.

A condition of his guilty plea was that he permanently surrender his police officer license in Texas. He went on to work as a deputy sheriff in New Mexico and was hired for the Jacksonville job by the mayor in April.

Judge Gray decided a crime of dishonesty is infamous and the office of police chief is an office of trust.

"Therefore, the court finds that defendant Herweg's 2002 Texas conviction makes him incapable of holding the office of police chief of the city of Jacksonville," said Judge Gray.

Alex Gray is the attorney for Tara Smith, the Jacksonville citizen who filed the suit. Gray says he hopes the ruling sends a clear message to Mayor Fletcher who has the authority to permanently remove the chief from office.

Herweg has another lawsuit pending in New Mexico that was filed earlier this month.
That lawsuit, filed by former Lovington, New Mexico police officer Travis Anthony Hobbs, states that Hobbs was forced to resign from the Lovington Police Department in August 2015 over an unproven complaint of misconduct involving under age individuals at at party at Hobb's residence that Herweg investigated.
Herweg, when questioned about his investigation, told the agency that he did not have evidence that Hobbs provided alcohol to the women at the party or that Hobbs knew they were underage, the lawsuit states.

The lawsuit states that Herweg was "negligent and reckless" in his handling of the complaint. Hobbs is seeking compensation for lost wages, attorney and court fees, and for "mental stress and anguish and damage to his reputation."