Readers will recall the hiring of Herweg being questioned by anyone with knowledge of Brady vs. Maryland and its bearing on dishonest police officers.

In a post published back in April, we told you about the little problem Herweg had in Texas when he was an officer with the Taylor, Texas Police Department.

Herweg had been drinking and subsequently had an accident (his car ran into a house).  He left the scene and then called and reported that his vehicle had been stolen.


Investigators did not believe his yarn and they successfully prosecuted a case against Herweg that resulted in a short stint in jail, a $2,000 fine and he permanently surrendered his state law enforcement certification in Texas as part of his guilty plea.

The Jacksonville Fraternal Order of Police, a retired former Jackson Police Chief and a couple of city council members were vocal opponents of Herweg's hiring given his documented issues with honesty and integrity.


One of those city councilmen, Tara Smith filed a suit against Herweg, Jacksonville Mayor Gary Fletcher, and Susan Davitt, the City Clerk, and is seeking his removal and repayment of funds paid to him. 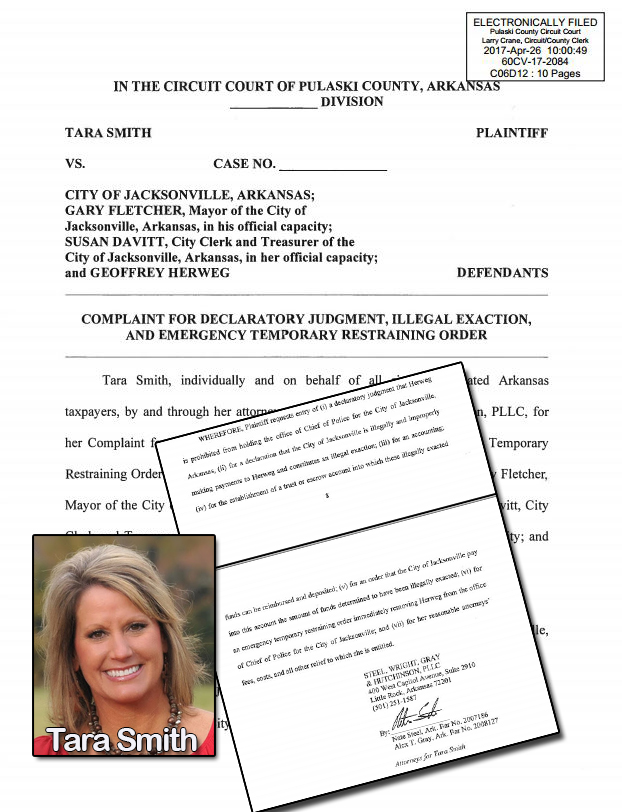 
If the suit is successful, Herweg will be out of a job and will have to repay all funds paid to him by the City of Jacksonville.  Plus attorney fees to Smith's attorney, Nate Steele.

The other  lawsuit, filed by former Lovington, New Mexico police officer Travis Anthony Hobbs, states that Hobbs was forced to resign from the Lovington Police Department in August 2015 over an unproven complaint of misconduct that Herweg investigated.

Herweg provided conflicting reports on the investigation to Lovington Police Chief David Rodriguez and a state law enforcement group that reviewed the complaint, according to the New Mexico lawsuit.

In Hobbs' lawsuit, filed last month in Lovington District Court, Herweg is accused of providing information "without factual foundation nor support" to the Lovington police chief that led to Hobbs being ousted from the department.

Herweg told Rodriguez, the police chief, that he'd investigated a complaint against Hobbs and found that Hobbs had hosted a party and knowingly provided alcohol to two women under the legal drinking age, according to the suit.

Rodriguez reportedly told Hobbs to resign from the department or be fired. Hobbs resigned.

Herweg, when questioned about his investigation, told the agency that he did not have evidence that Hobbs provided alcohol to the women at the party or that Hobbs knew they were underage, the lawsuit states.
The Law Enforcement Academy decided in a unanimous vote to allow Hobbs to keep his credentials and that no "formal discipline" against Hobbs was warranted, according to an agency filing.

The lawsuit states that Herweg was "negligent and reckless" in his handling of the complaint. Hobbs is seeking compensation for lost wages, attorney and court fees, and for "mental stress and anguish and damage to his reputation."

"It comes down to the credibility of Herweg," said Barry Crutchfield, Hobbs' attorney. "Why he would make a claim that Hobbs served these kids alcohol ... then when he's questioned about it he says, 'I didn't have any evidence?'"

Mayor Gary Fletcher  will regret and pay for his decision to hire Herweg.

Remember that he said Herweg had a long list of credentials and will be the most educated person to lead the Police Department.

"I am staking my credibility on this man's credibility," Fletcher said back in April.