Jacksonville aldermen and citizens have questioned the city's decision to hire a man with a misdemeanor criminal conviction as its new police chief.

The city hired Geoffrey Herweg, deputy chief of the Lovington Police Department in New Mexico, after a national search to replace Police Chief Kenny Boyd, who retired on April 1st.

Herweg pleaded guilty to filing a false police report and failure to report an accident in Williamson County, Texas, in 2002, according to court records. An affidavit filed by the county attorney's office states that Herweg, on Christmas Eve in 2000, was driving and "became involved in an accident" that damaged a house and a car.

Herweg left the vehicle at the scene and told police it had been stolen, according to the affidavit. He was arrested after investigators determined that he'd "wrecked and abandoned the vehicle" and knowingly lied about it.

Herweg, who had been employed by the Taylor, TX Police Department for seven years, was sentenced to three days in jail, paid a $2,000 fine and permanently surrendered his state law enforcement certification as part of his guilty plea, according to court filings. 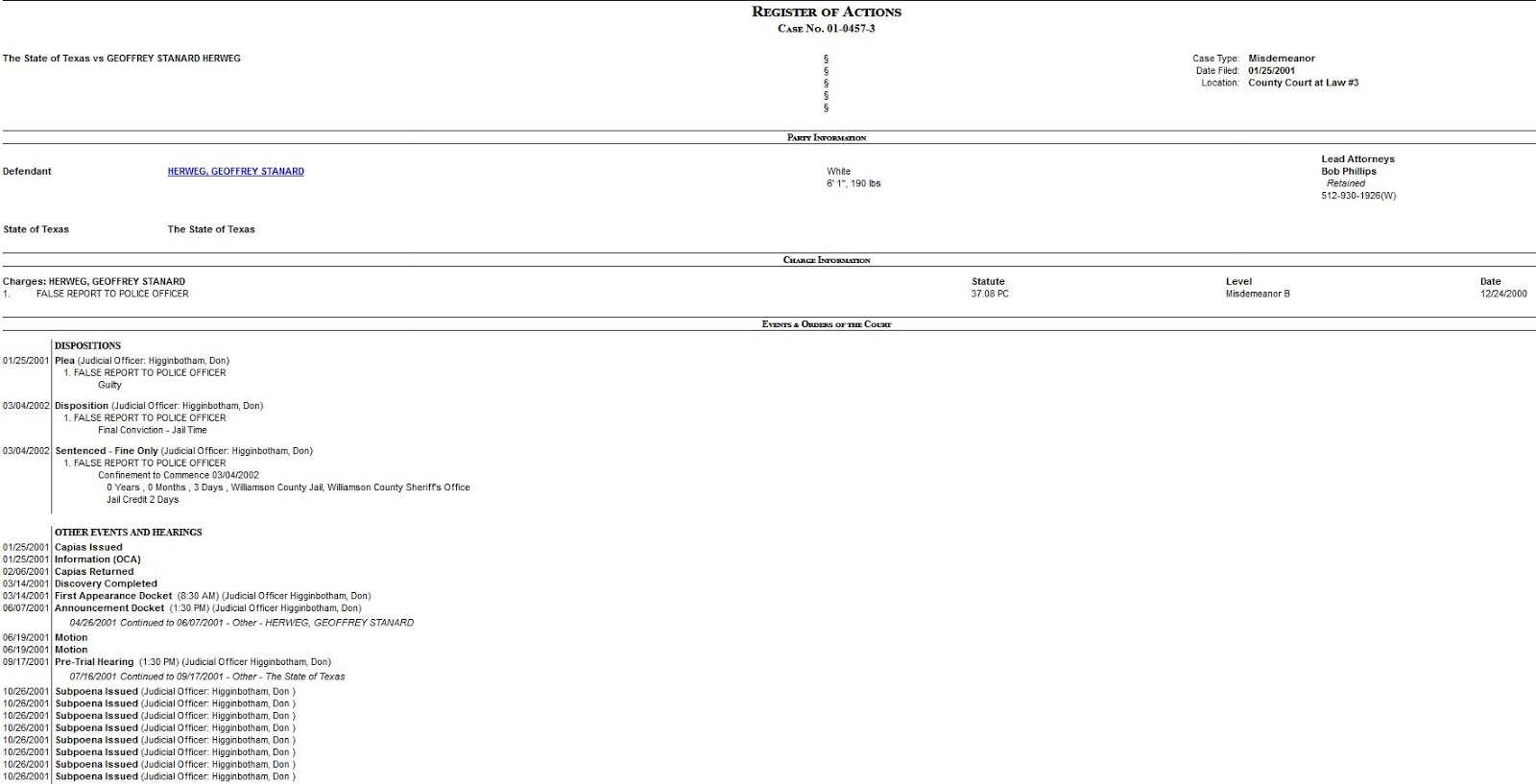 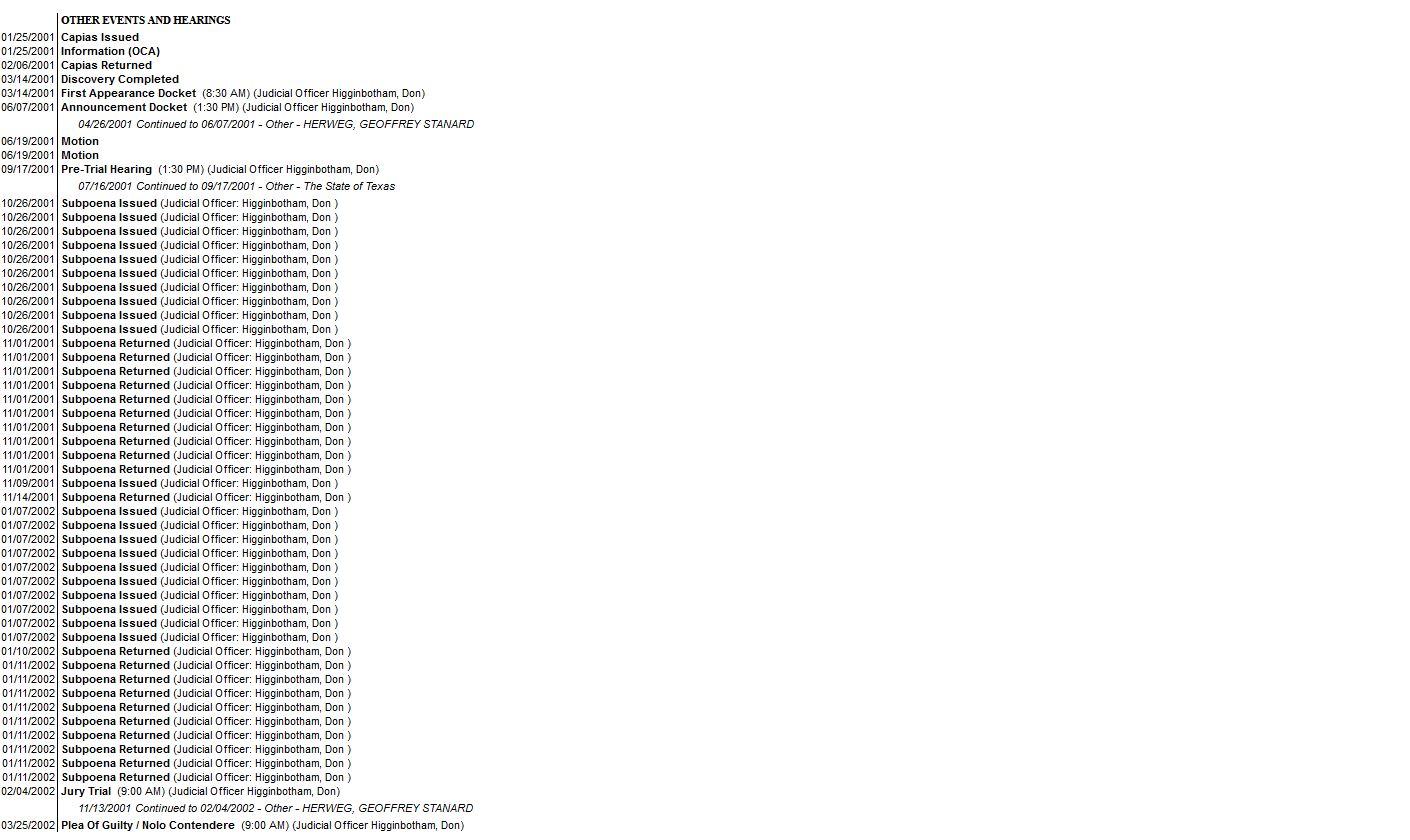 Herwig who had been applying for positions all over the country the last few years trying to outrun questions about his credibility.

In January 2016, Herweg withdrew his application for the Columbus, MS police chief's position after his lying became an issue there. 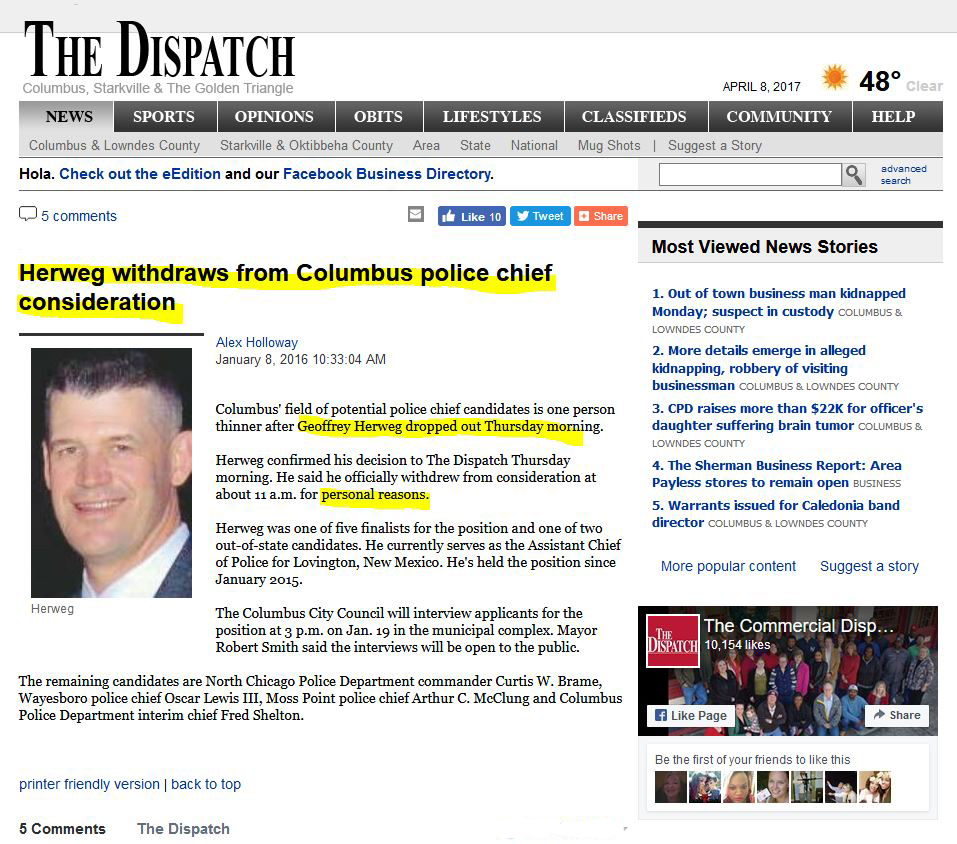 While a misdemeanor conviction does not normally prevent an individual from obtaining or maintaining a job in law enforcement, police officers who have been dishonest are sometimes referred to as "Brady cops." Because of the Brady ruling, prosecutors are required to notify defendants and their attorneys whenever a law enforcement official involved in their case has a sustained record for knowingly lying.

Intentional, malicious, or deceptive conduct will permanently destroy an officer's credibility and any agency that employs such an individual places the credibility of their agency at risk.

Mayor Gary Fletcher defended his decision to hire Herweg. He said Herweg has a long list of credentials and will be the most educated person to lead the Police Department.

"I am staking my credibility on this man's credibility," Fletcher said.

Alderman Tara Smith said Herweg's criminal record raises questions about his integrity. She noted that Jacksonville police, like most law enforcement agencies, has a written policy against dishonesty.

"It's alarming to me that this is who the city of Jacksonville mayor and city administration have chosen to lead our Police Department," Smith said.

According to Herweg's LinkedIn profile, he holds a bachelor's degree in criminal justice and a master's degree in business administration from University of the Southwest, a private university in New Mexico.

He spent eight years in the Texas Army National Guard.

After his conviction, Herweg moved to Arizona and worked as a security guard at the Palo Verde Nuclear Generating Station. He also worked as an aviation dispatcher in Arizona.

Armor Group International, a private security firm, hired Herweg in 2007 as a supervisor on an emergency response team under contract at the U.S. Embassy in Kabul, Afghanistan.

He worked for another military contractor, Tennessee-based EOD Technology, in Baghdad in 2009.

Herweg moved to South Carolina in 2010 and worked for Yale Enforcement Services, another private security company.

He joined the Lovington Police Department in 2012 and became deputy chief in 2015.

Lovington is a city of roughly 11,000 residents. The Police Department has 28 officers.

Smith said she was against the decision to hire Herweg not only because of his criminal record, but also because he had not worked at a police department the size of Jacksonville's. The city of roughly 28,300 residents employs 80 officers.

"I've made it very clear to my fellow aldermen that I do not support this decision by our administration," Smith said.

Former Jacksonville Police Chief Gary Sipes, who led the department from 2008 to 2014, said Herweg's conviction could cause problems if Herweg has to testify in a case.

"His integrity is going to be questioned and he's going to have to prove himself," he said.

Pulaski County Deputy Prosecuting Attorney John Johnson said his office, in cooperation with law enforcement agencies across the county, keeps track of Brady officers. He said whether an officer's history of dishonesty is allowed in court depends on the officer's role in a case.

"If we are on notice that an officer has been disciplined, we submit that information under seal to the judge and we let the judge make a determination whether or not it's discoverable pursuant to Brady," Johnson said.

Excellent reading about lying and being a police officer: