JUDGE FAILS TO STOP AT CHECKPOINT, IS CHASED AND ARRESTED FOR DWI

The Arkansas State Police had to finally release the dash cam videos to us due to a recent court ruling.  We sent a FOI request to them in January 2017 for video footage of the incident, but they denied our request citing an on-going investigation.  We edited the two DVDs provided and placed a video on YouTube.   You can view it by clicking on the video below.

On January 20, 2017 Troopers from Arkansas State Police Troop J were conducting a Sobriety Checkpoint between I-40 and Highway 109 just outside Clarksville.

It was around 9:15 p.m. and not much activity was happening. Troopers were talking about gas from eating chili for supper, a naive local police officer, needing to urinate (he can be seen and heard taking a leak after the chase) and joked about stopping an individual with the same name as one of the state troopers (an instructor at a local school) which the trooper commented that there was another guy with the same name as his and he was "a turd."

As their conversation was drifting to places to go for a weekend trip, a pick-up truck blasted through the checkpoint narrowly missing the troopers standing in the middle of the highway between their vehicles parked on each shoulder with blue lights flashing. 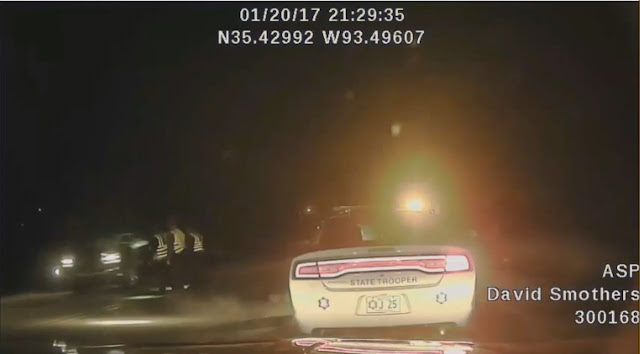 Trooper Greg Smith jumped in his vehicle and gave chase.

During the chase the pick-up truck runs off the road a couple of times, and finally stops. 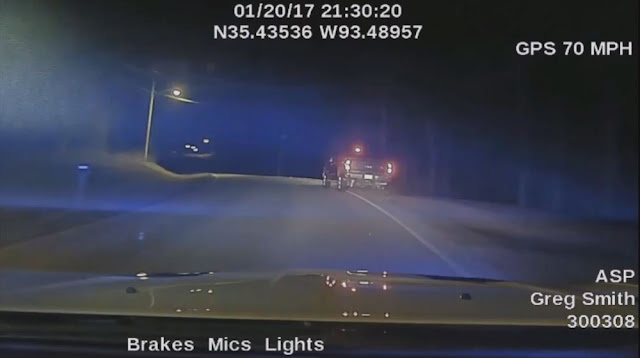 Trooper Smith attempts to pull in front of the stopped vehicle as Trooper David Smothers pulls up behind the truck to block it in.

But the driver of the pick-up truck decides to keep going, crossing in front of Trooper Smith and turning into the gravel parking lot of a local business. 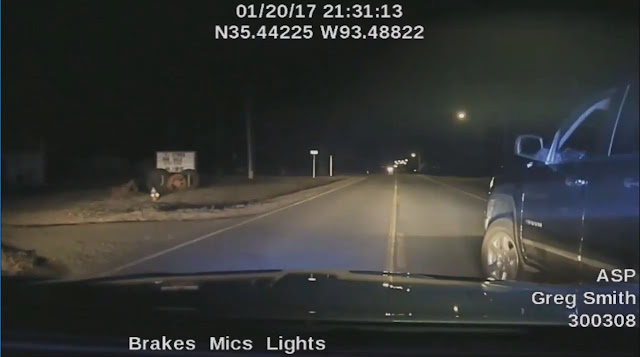 Trooper Smith has to use his vehicle to push the truck sideways to get the driver of the truck to stop. 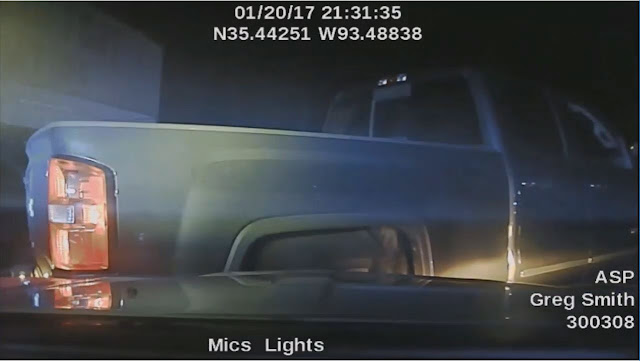 Both Troopers Smith and Smothers approach the truck with guns drawn, and repeatedly tell the driver to exit the vehicle.

After telling the driver to open the door and get out several times, the driver opens the door, but is too drunk to get out.

Trooper Smith approaches the open drivers side door and asks the driver what is wrong with him.  The driver mumbles something and both troopers tell the driver to get out of the vehicle again. The driver, in heavily slurred speech, appears to say "fuck you" twice and then defiantly states " I'll get out if you stop ordering me".

Trooper Smith then asks the driver how much he has had to drink and the driver states, "fuck you" and "none of your business".

By this time Clarksville police officers have arrived to assist and as they are holding up the driver to keep him from falling down, Trooper Smothers goes over to Trooper Smith and tells him that the driver is none other than Judge Pearson, a local circuit court judge.

Judge "Wild Bill" Pearson was so plastered that he couldn't be given any field sobriety tests and has to be held up and walked to the troopers car to take him to jail. 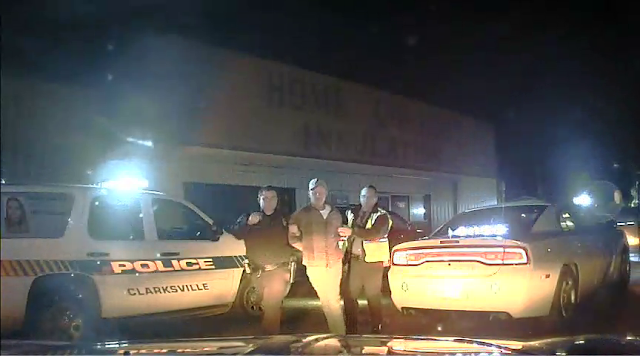 According to documents filed in the Criminal Case against now suspended-with-pay Judge Pearson (the Judicial Discipline & Disability Commission is conducting an investigation of Judge Pearson and obtained an order suspending him from his position as a judge), he pissed himself and puked all over the jail when being booked.

You might be wondering why we haven't posted Judge Pearson's mugshot.  Well, for some reason protocol was not followed and no mugshot was taken.

Even though the judge was in the Johnson County Detention Center for more than three hours, Sheriff Larry Jones told reporters that jailers did not take a mug shot.


"I just really don't have a good answer. I am looking into it because our policy does require that each person that comes into our detention center be photographed," Jones said. "It does not matter who they are, we try and treat everybody the same."

Jones told reporters mug shots were taken of other inmates who were brought to jail around the same time.

Did jailers not want to incur the wrath of Judge Pearson?  Was it an Act of God?  We trust that Sheriff Jones will get to the bottom of it.

We have sent a follow-up request for video to Sheriff Johnson and will post an update when and if more video is received.


Rosenzweig has made a nice living getting the best deal possible for individuals guilty of committing crimes.

Afraid of repercussions, local Prosecuting Attorney David Gibbons recused himself and asked for a special prosecutor to be appointed.


Last year Gibbons refused to file charges against other inmates or jailers in the death of a jail inmate in Franklin County even though the autopsy of the inmates body that was performed by Dr. Stephen Erickson, deputy chief medical examiner for the state of Arkansas found that the manner of death was a “homicide, in that the death resulted in some part from actions of people other than the deceased.” There were eight applications of the Taser over a period of 11 minutes by Franklin jailers.  http://www.swtimes.com/news/20160901/franklin-county-prosecutor-wont-file-charges-in-inmates-death

So another Little Rock attorney, Jason Barrett was appointed as Special Prosecutor.

As other judges in the circuit were reluctant sit in judgement of a fellow drinking and hunting buddy, retired judge John Langston has been appointed to hear the case. 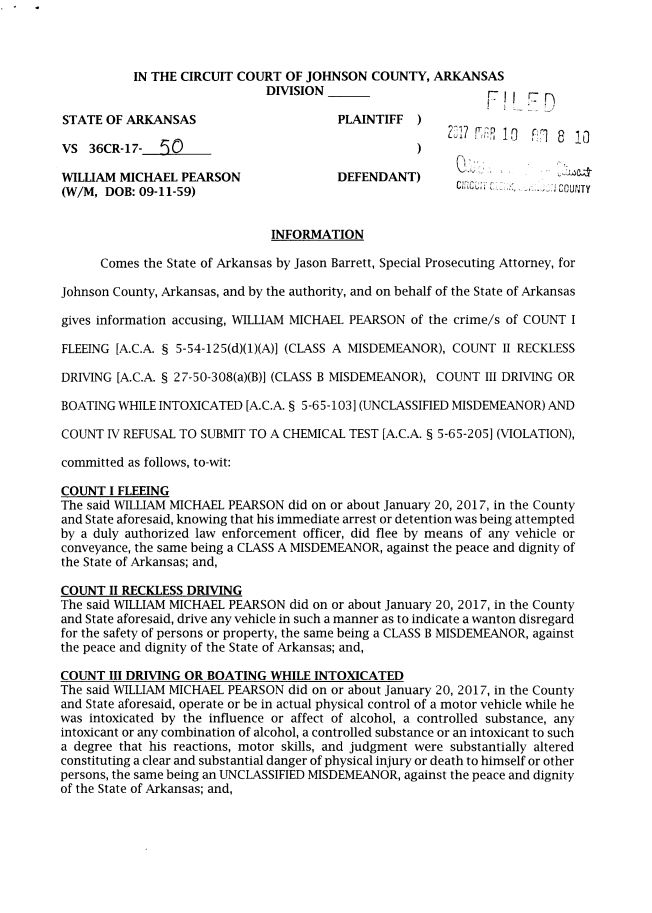 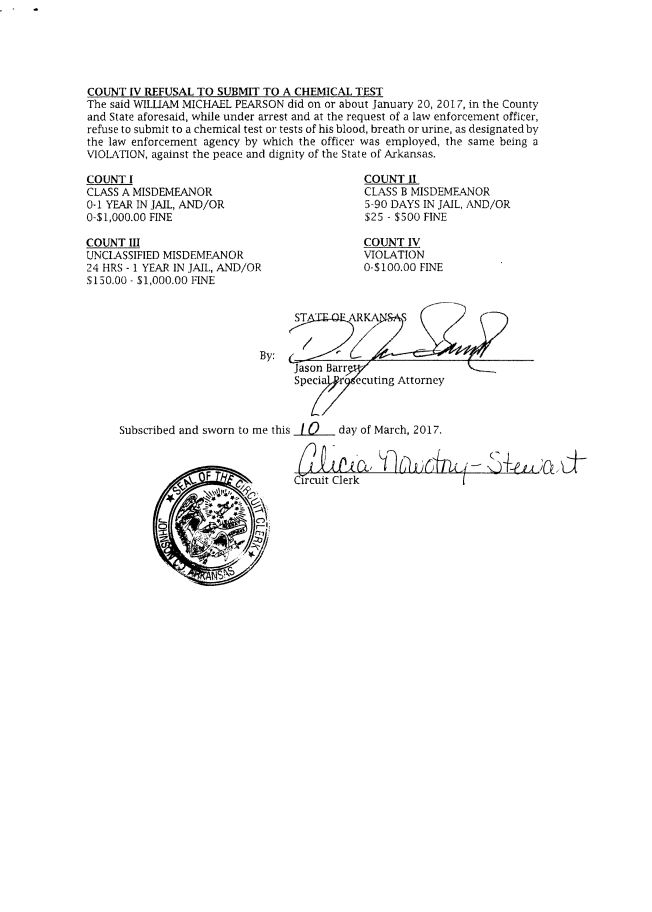 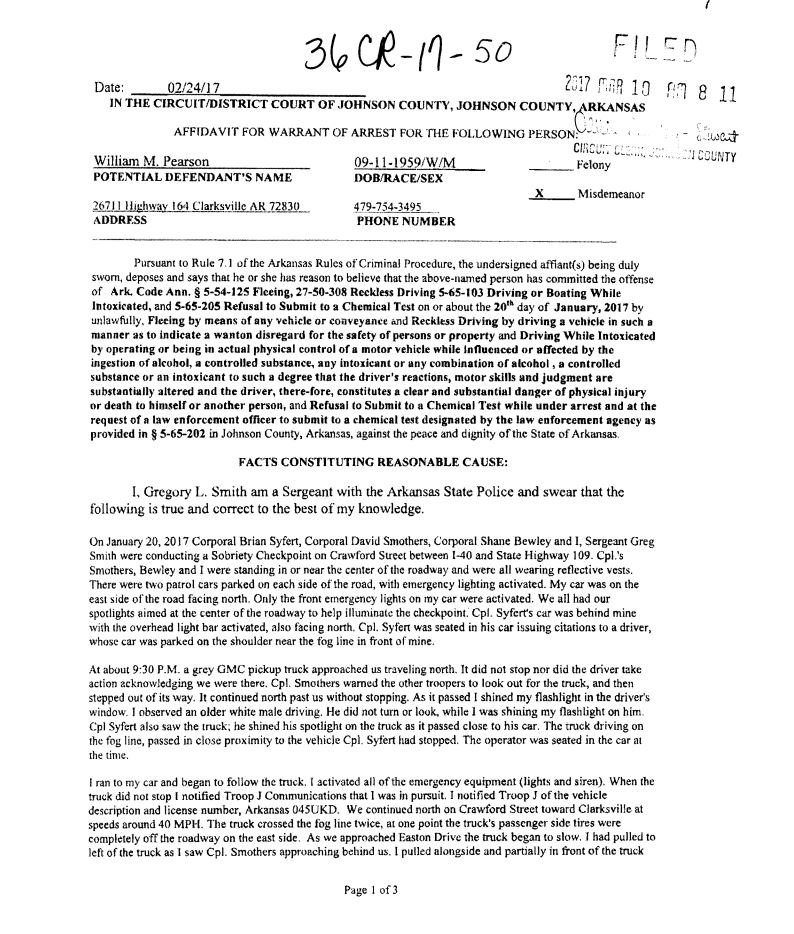 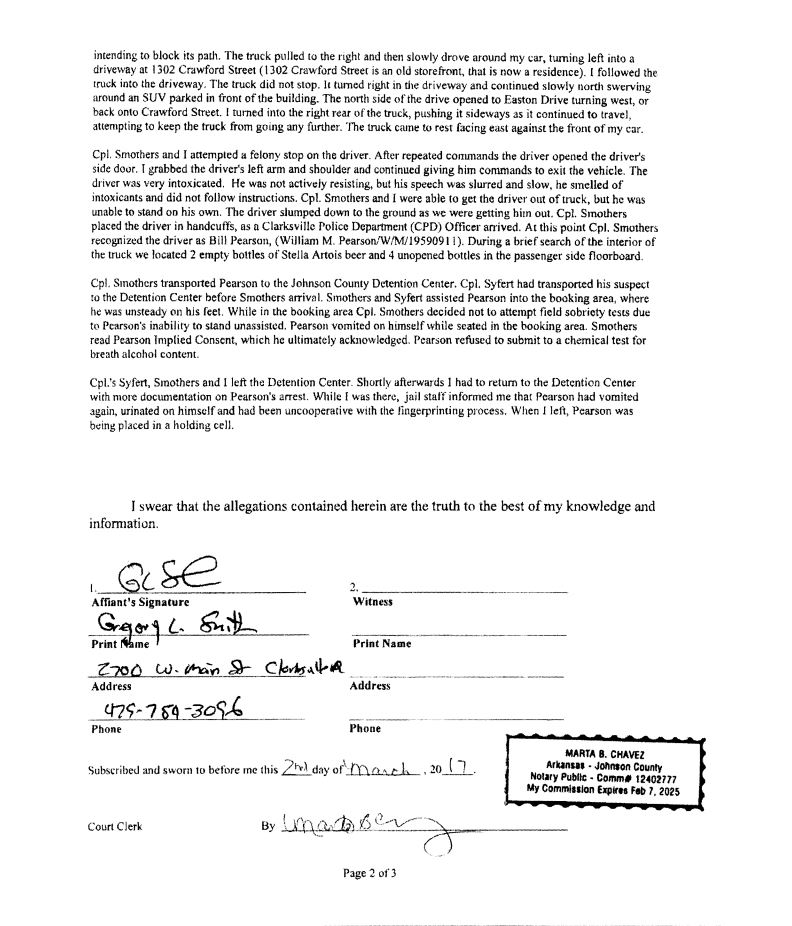 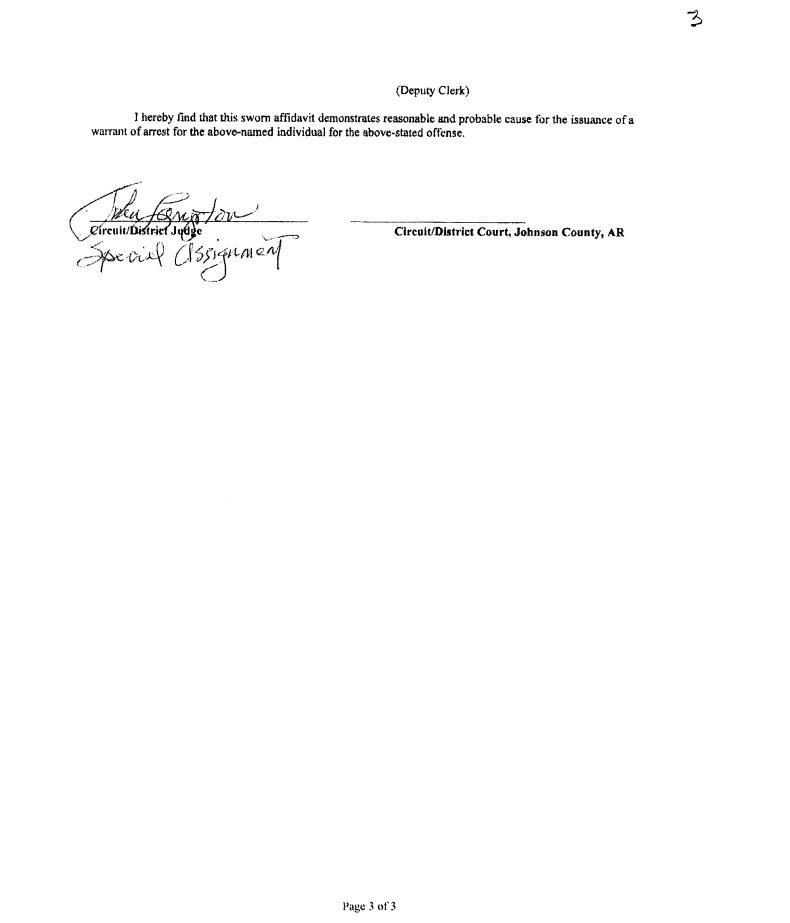 We wonder why the elected prosecutor and judges are afraid to do the job they were elected and are paid to do?  Now the tax payers have to foot the salaries for a special judge and a special prosecutor.

Pearson got the deal of a lifetime in his criminal case yesterday. Take a look at the official record. 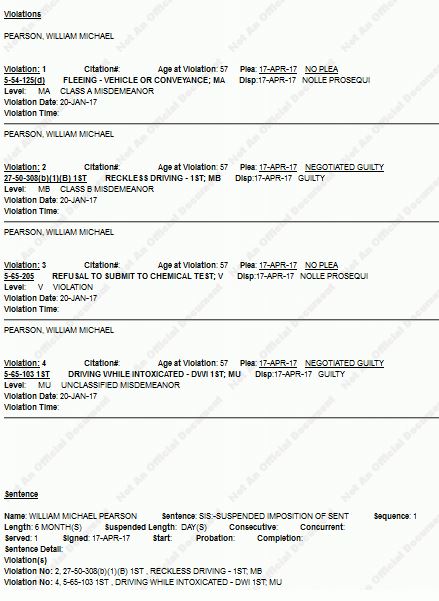 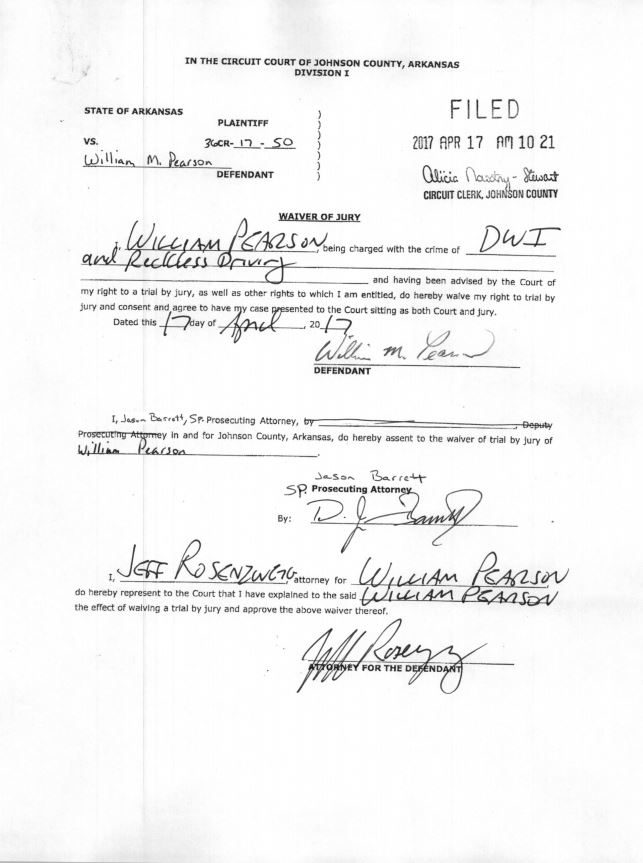 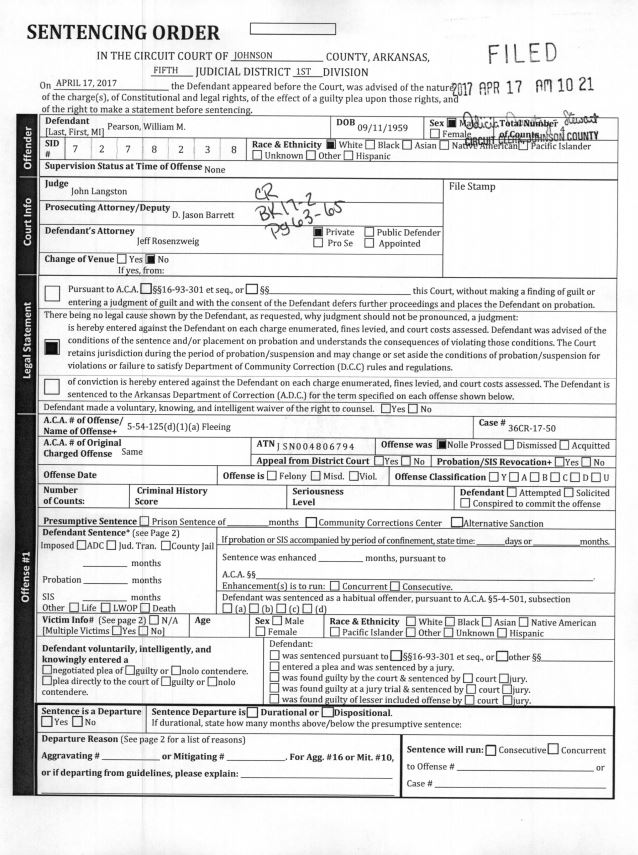 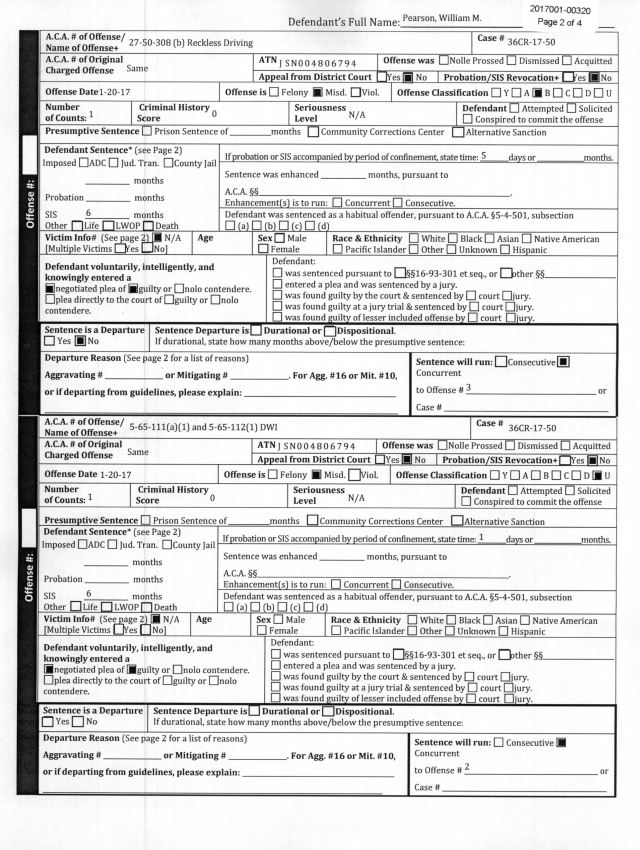 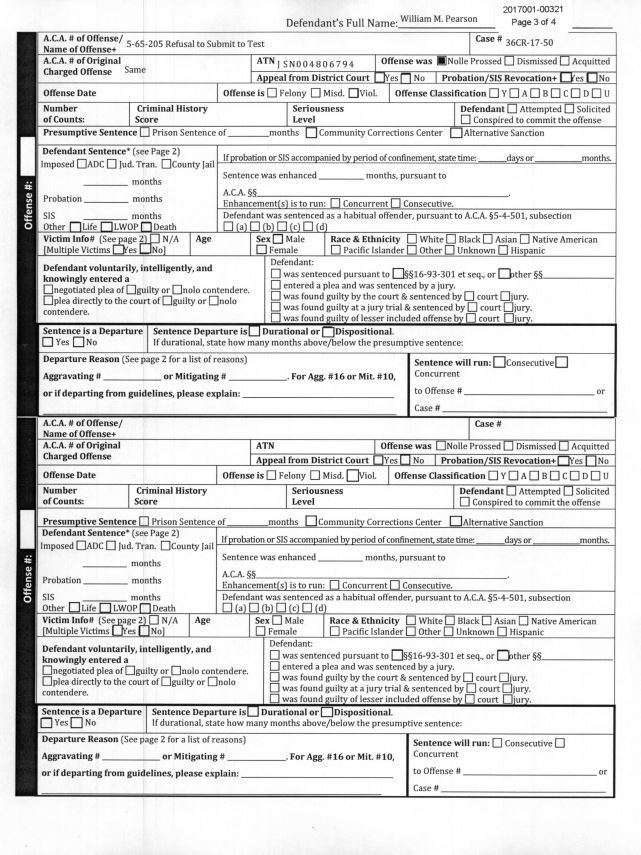 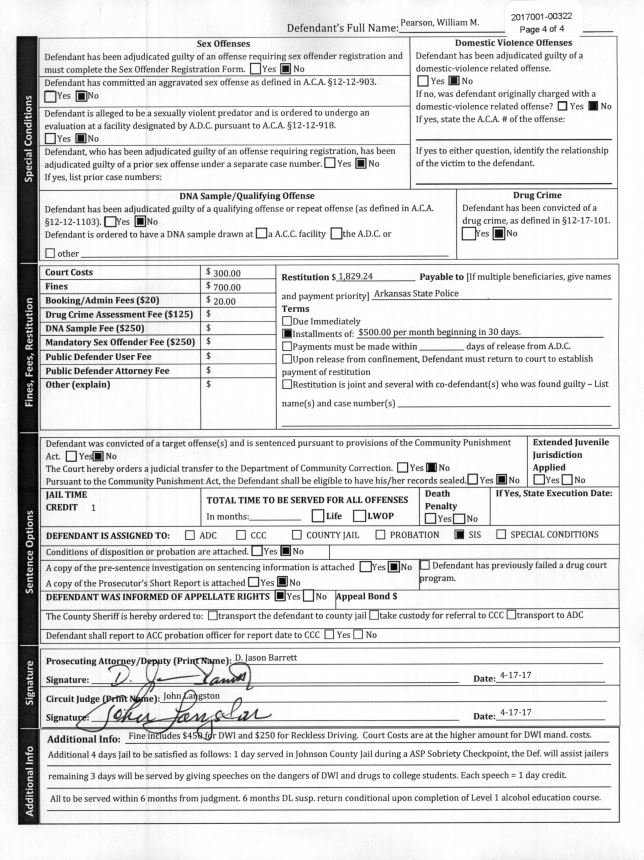 Pearson pleaded guilty yesterday (April 17) to driving while intoxicated in January, according to court documents.

“I regret my actions and look forward to redemption and making amends for this and assure all that this will never — ever — happen again,” Pearson said in a statement released Monday.

Pearson also apologized to his family, fellow judges and lawyers, and residents of the 5th Judicial Circuit, which consists of Franklin, Johnson and Pope counties.
The fleeing charge and the refusal to submit to a chemical test was dropped. Totally unbelievable.

No doubt a plea deal was stuck to drop the most serious charges and get the matter taken care of as quickly and quietly as possible.  That's the good ole boy system at work.

Pearson’s drivers license will be suspended for six months and returned only if he completes an alcohol education course, according to court documents. Pearson also is required to pay a $700 fine and speak to college students about the dangers of DWI and drugs.

“I have never considered myself above the law, then or now,” Pearson said. “I simply should have known better not to drink and drive intoxicated. The shame and embarrassment is mine.”

And the citizens of Arkansas have to pay an assclown like Pearson a salary when he should resign as a Circuit Court Judge due to this incident.

This is the full statement that Pearson read in court.  It was released by his attorney. 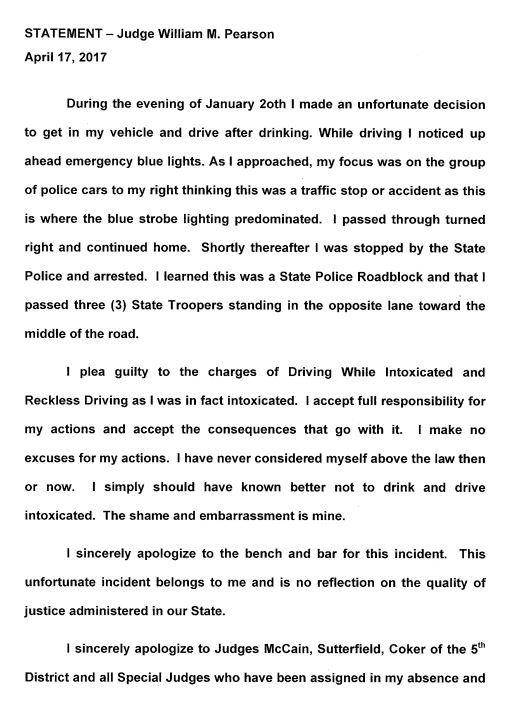 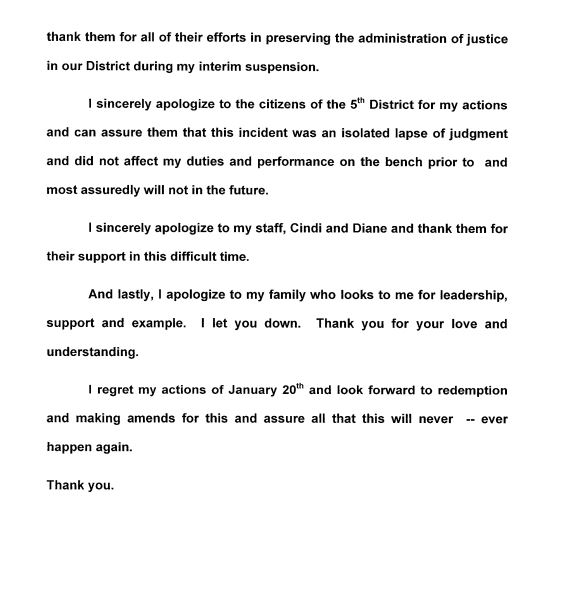 We obtained additional videos, still images and documents from Prosecuting Attorney David Gibbons, who by the way was extremely reluctant to accept a verbal Freedom of Information request from us, in the mail today.

The video from the jail is extremely embarrassing for Judge Pearson.  It shows an intoxicated, cursing, belligerent and at times confused individual.

Judge Pearson refuses to get into a cell and has to be mollycoddled by a supervising deputy who is obviously treating him differently that they would any other person that was acting in such a manner.  Pearson remarks that the overly kind deputy is "fucking with me."

Had it been anyone else acting and talking smack like Pearson was doing, they would have picked him up and tossed him in that cell.


Pearson states that the only thing he did was to drive drunk and when he is told he did not stop at a checkpoint, he claims he never saw it.

The photos show damage to the drunk judges truck and the vehicle of ASP Trooper Smith. 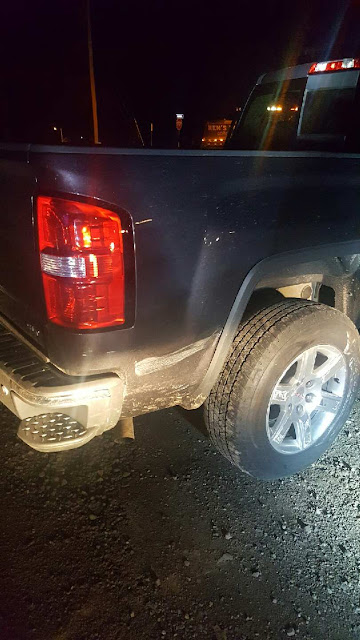 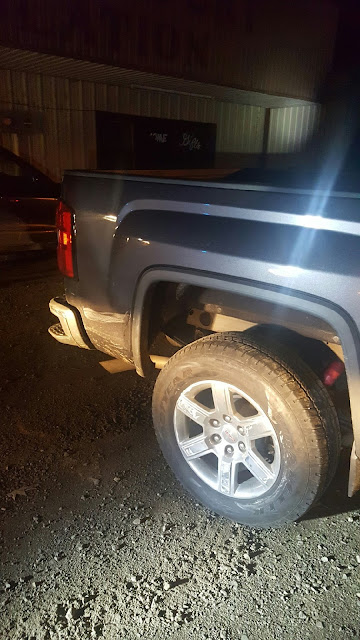 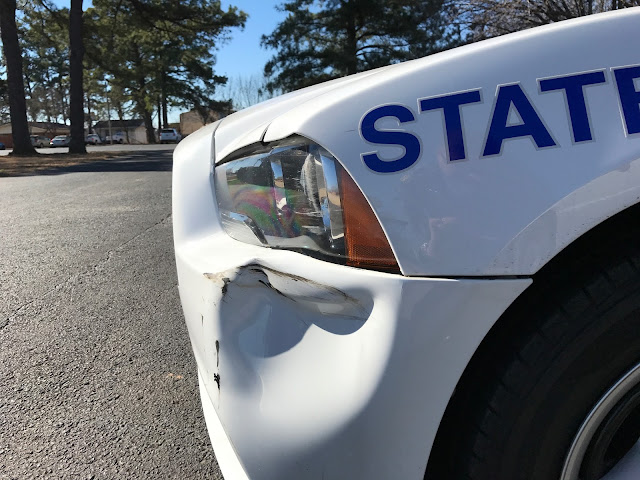 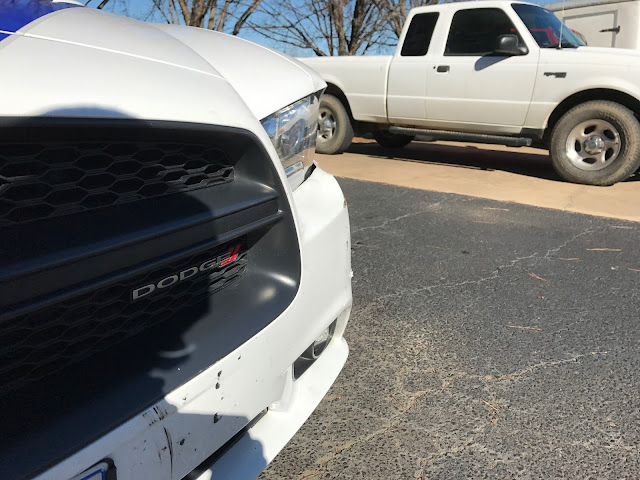 The estimate to repair the Trooper's vehicle: 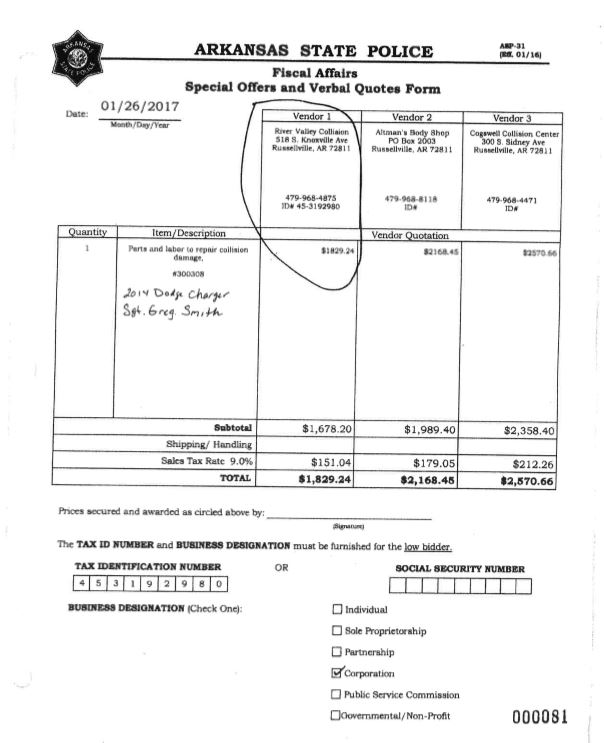 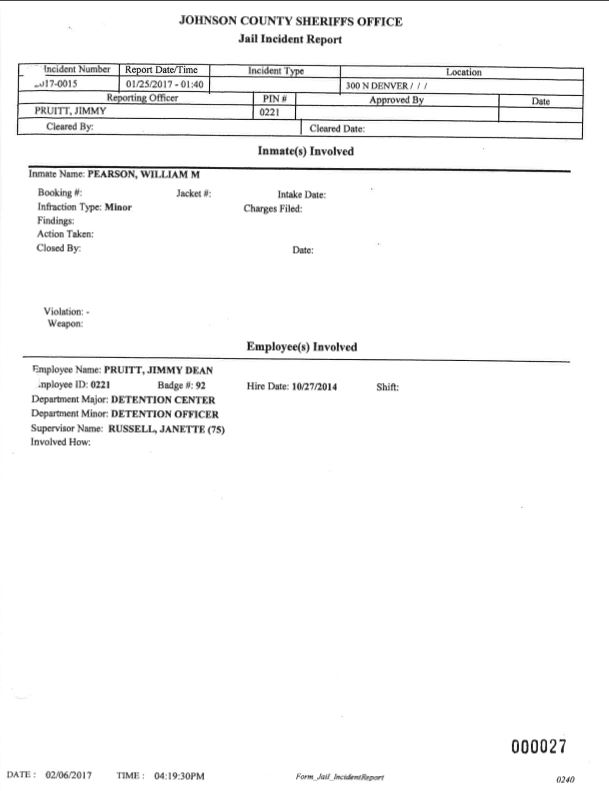 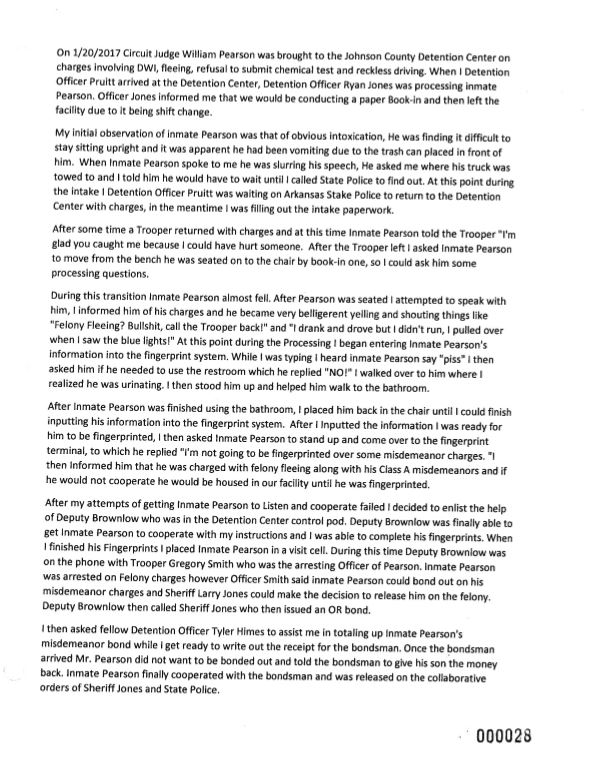 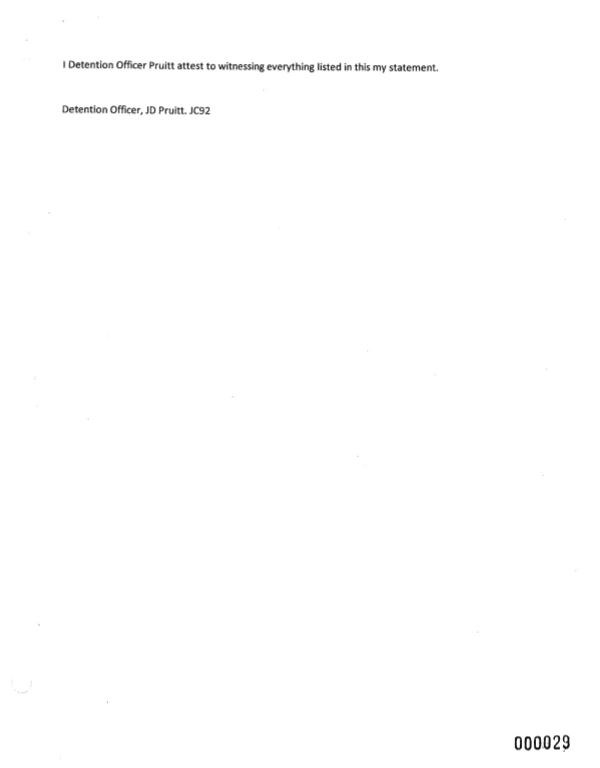 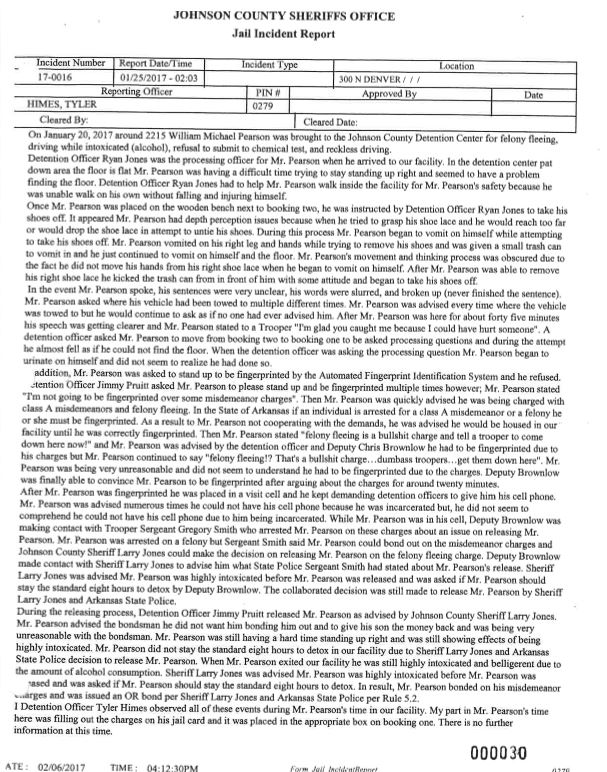 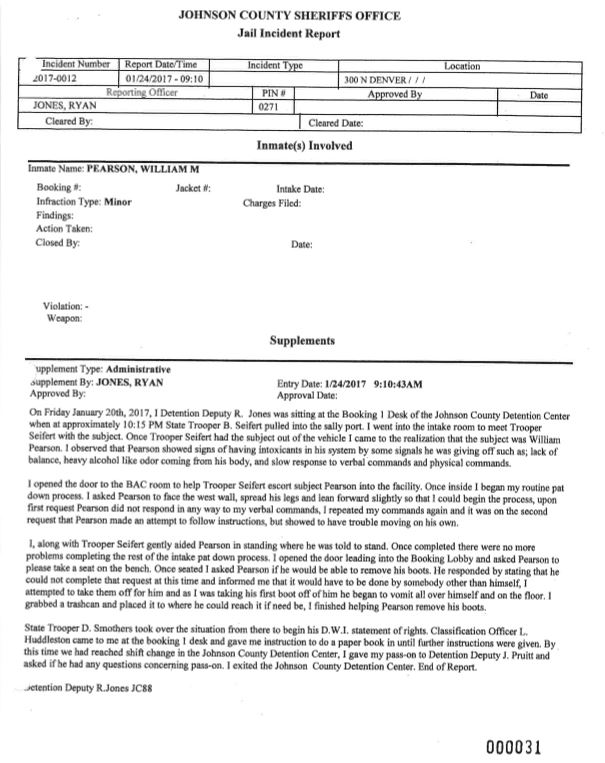 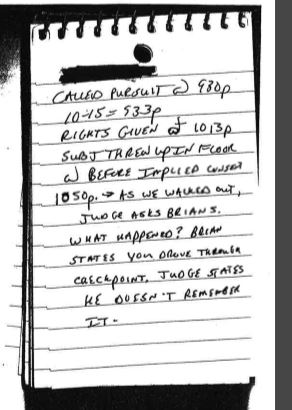 We are processing additional video (no audio track) from the jail CCTV system and are trying to match audio available from the wireless microphone the ASP Trooper was wearing for a portion of the video.  Check back for updates.