In previous installments we exposed Sowell as a failed wannabe Arkansas State Trooper, one of the sorriest trooper recruits in the entire history of the ASP and as fraudulent mayor of Shirley.

In this installment we will expose some of Sowell's shenanigans and potential illegal acts as a fraudulent mayor.

Sowell verbally resigned as mayor at a December 20, 2016 after a heated discussion over his secretive purchase of run down, collapsing building across the street from Shirley City Hall. 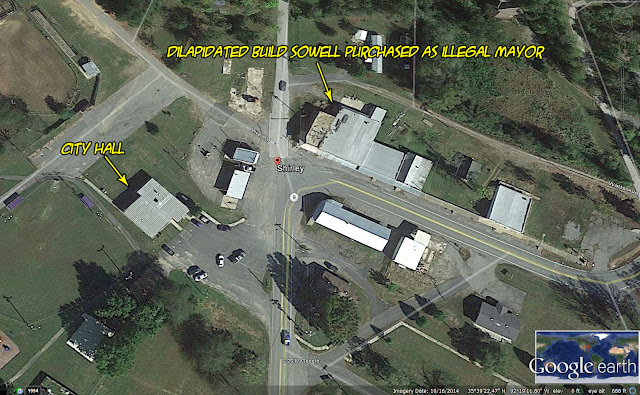 Sowell was pissed off that an email had been sent to Darla McJunkins with First Service Bank from the city clerk and several city council member requesting information about a loan that Sowell was obtaining for the city to purchase an old run down building near city hall.

The email called into question the terms of a loan the mayor, allegedly for the city, was securing to buy some downtown buildings. In the Email, dated Nov. 16 from city clerk/recorder Melissa Worthing, Councilwoman Margaret Earnhart, Councilwoman Lisa Hackett and Councilwoman-elect Ginny Kimmons-Stone, the assertion is made that “transparency is sorely lacking, all negotiations with First Service have been kept in the dark from the council,” and that the clerk had not received any appropriate paperwork for the loan, concluding, “Prior to approving or disapproving this loan, we, the undersigned, ask that the [SIC] all information is conveyed to the council and that there is a review of the citys’ [SIC] finances, so we can better judge our situation.” 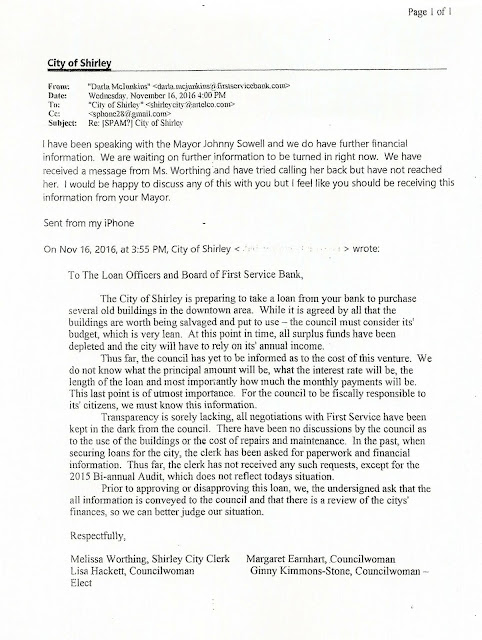 The minutes from the meeting provide interesting details. 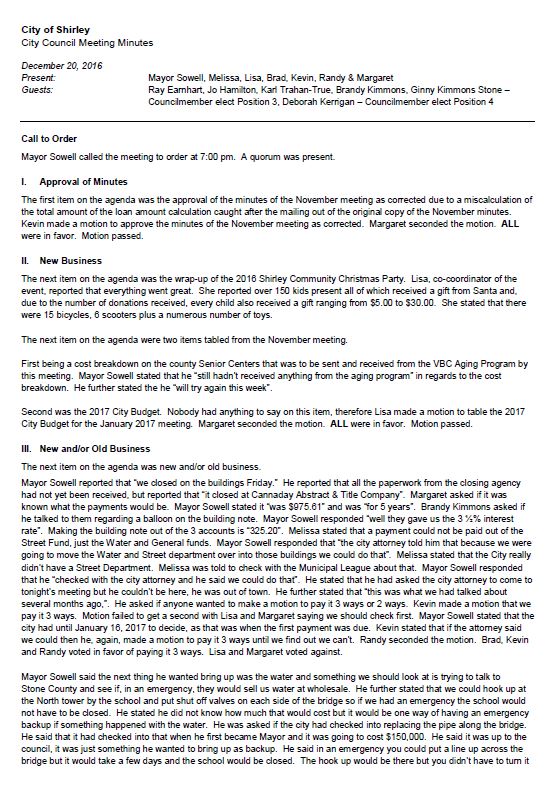 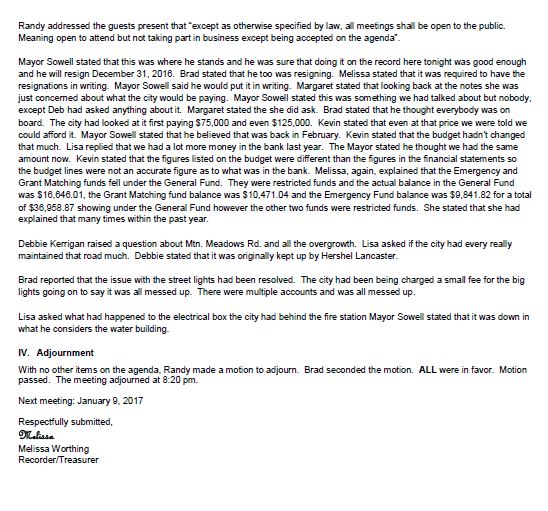 Sowell also had his panties in a wad over the city clerk, Melissa Worthing, providing information to Legislative Audit.

Sowell was found in a previous audit to have used city funds in an illegal manner. 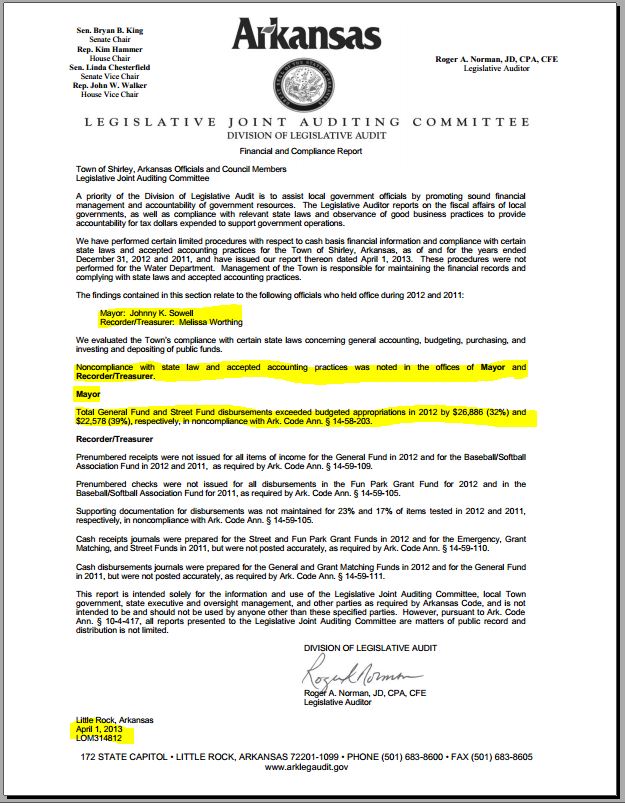 Sowell had violated Arkansas Code Annotated § 14-58-203 by using funds allocated for one purpose for something not allowed (he and his boss Cody Hiland did similar things with Federal funds in his position as the 20th Judicial Drug Task Force head - to be exposed in Part 4 of this series).

Minutes from city council meeting reveal that Sowell wanted the city to buy the rickety old buildings to house the Water and Street department, in spite of the fact that the city was operating with severely limited funds and the building had no restrooms and the cost to make them structural sound, usable and ADA compliant would bankrupt the city.

If that was not enough reasons to keep from buying the shithole, the appraisal of the property determined that it was not worth the asking price and there was an existing note on the property on excess of $50,0000.

A recipe for disaster. 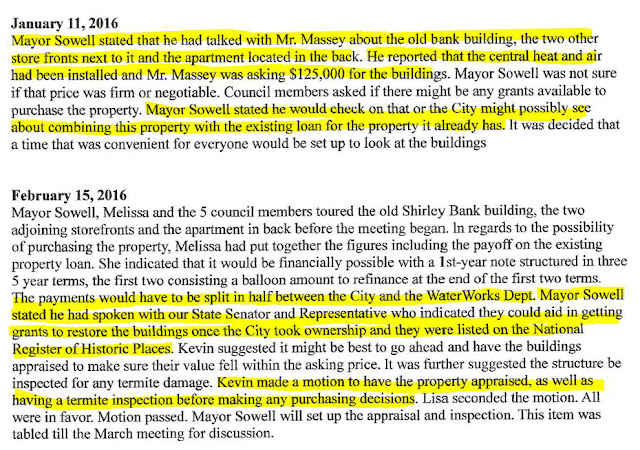 So Sowell and one of his cronies resigned at the December meeting. Word was spreading through the town about Sowell not actually residing in the city limits and that he was a fraudulent mayor. There were also allegations of  multiple wrongdoings. Perhaps Sowell saw the writing on the wall. Perhaps he had done what he intended to do all along and find a buyer for the crumbling buildings for some hidden agenda for his personal benefit.

Also at play and unknown by the general public was underhanded ploy by Sowell to try and get rid of one of his biggest roadblocks to having complete control, City Clerk and Recorder Melissa Worthing.

Sowell found out that Worthing was not being billed for not paying for city water service to her home. This had been going on for quite some time.  This was a serious thing and could result in her being removed from office and never being able to hold a public office again.

Sowell tried to use this fact and blackmail Worthing into resigning. Sowell told her that if she resigned, he would make the problem of her not paying for water go away.

Do the terms collusion and obstruction of justice pop into your mind? 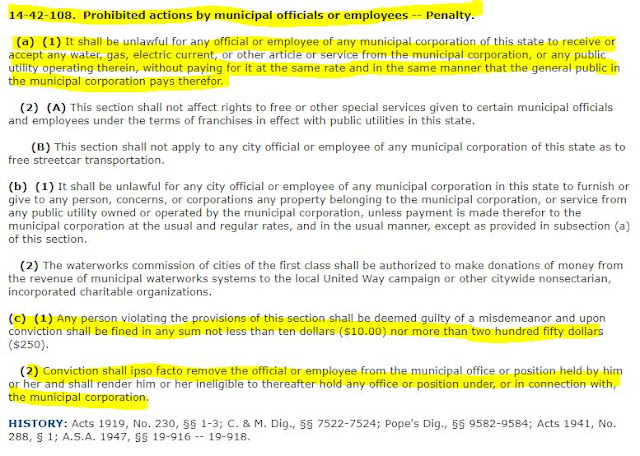 Why would an employee of the 20th Judicial Prosecuting Attorney's Office and head of the Drug Task Force think that he could ignore an illegal act and use it for his personal benefit?  Because he is corrupt.

Worthing, having personal knowledge of Sowell's corruption and reputation for making things happened to people took the extraordinary measure to make a notarized statement to be used in the event something happened to her. 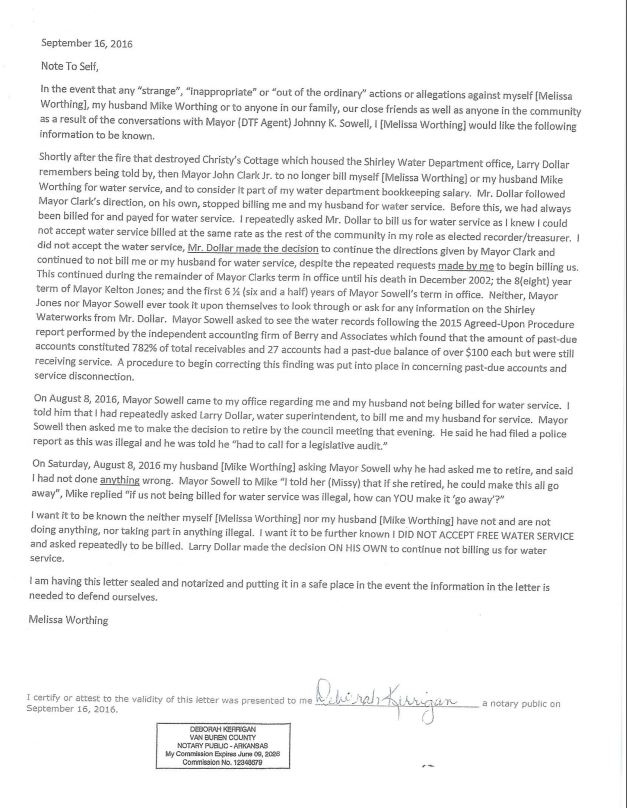 The morning after the city council meeting where Sowell resigned, Worthing went to her office and found that the tape recording of the meeting had been taken by someone.

Worthing received a text message from Sowell that he had taken the tape (without her permission) and would give it back later that day.

She called the Van Buren County Sheriff's Department to report the theft of the tape.

Later a report was made. 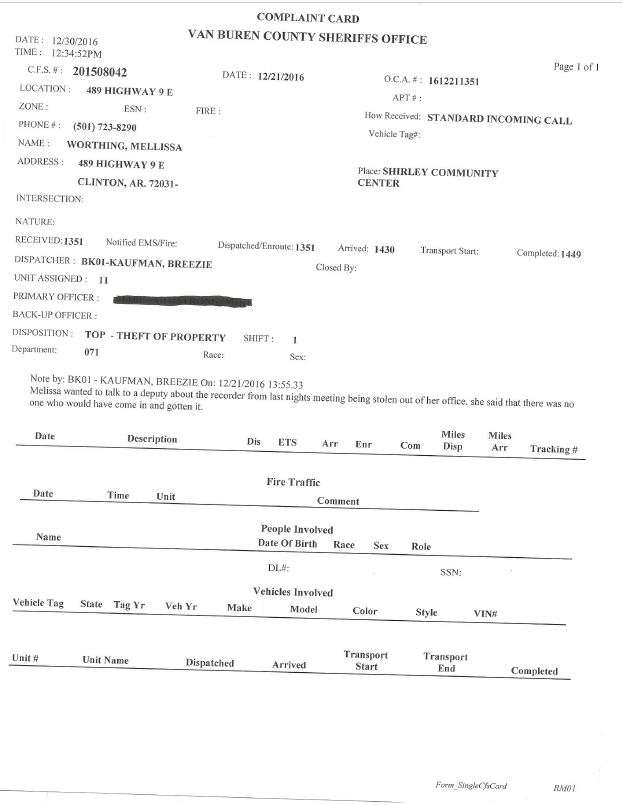 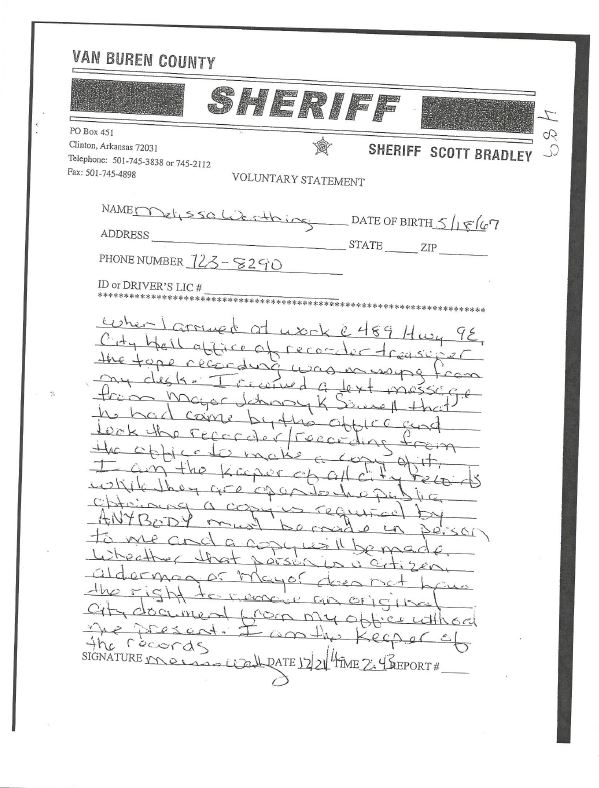 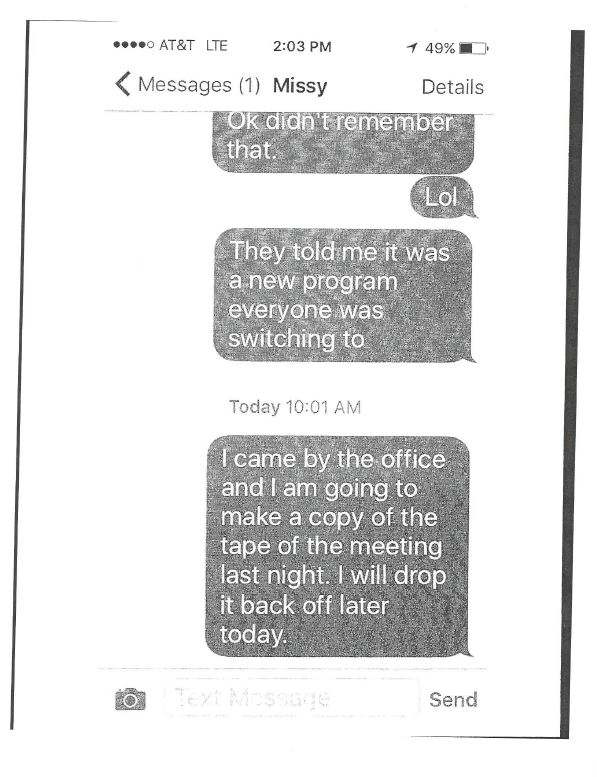 Sowell took the tape and went to a local newspaper and played the tape for a reporter with the Fairfield Bay News. 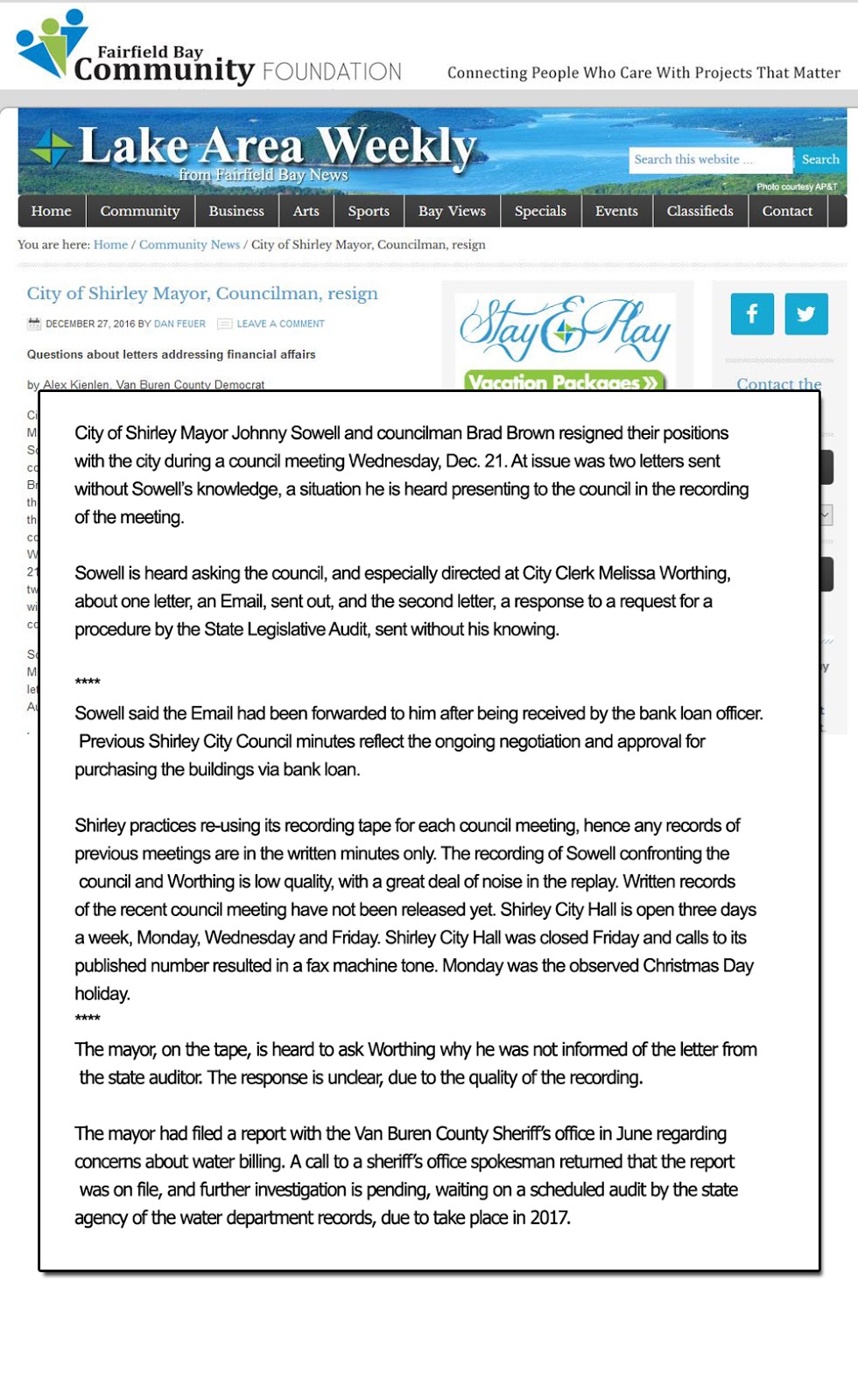 We sent a Freedom of Information to the Van Buren County Sheriff's Office for a copy of the report mentioned in the article and the reponse that we received from them was there were no documents or records.

Was the report pulled at the request of Sowell to remove any evidence that he had knowledge of illegal activities at city hall and which he interned to use in a failed blackmail attempt to force Worthing to resign?  Probably so.

In the January 2017 meeting of the Shirley city council, an article in the Van Buren County Democrat reported that city finances were strained due to the recent purchase forced by former fraudulent mayor Sowell  of two decrepit buildings. 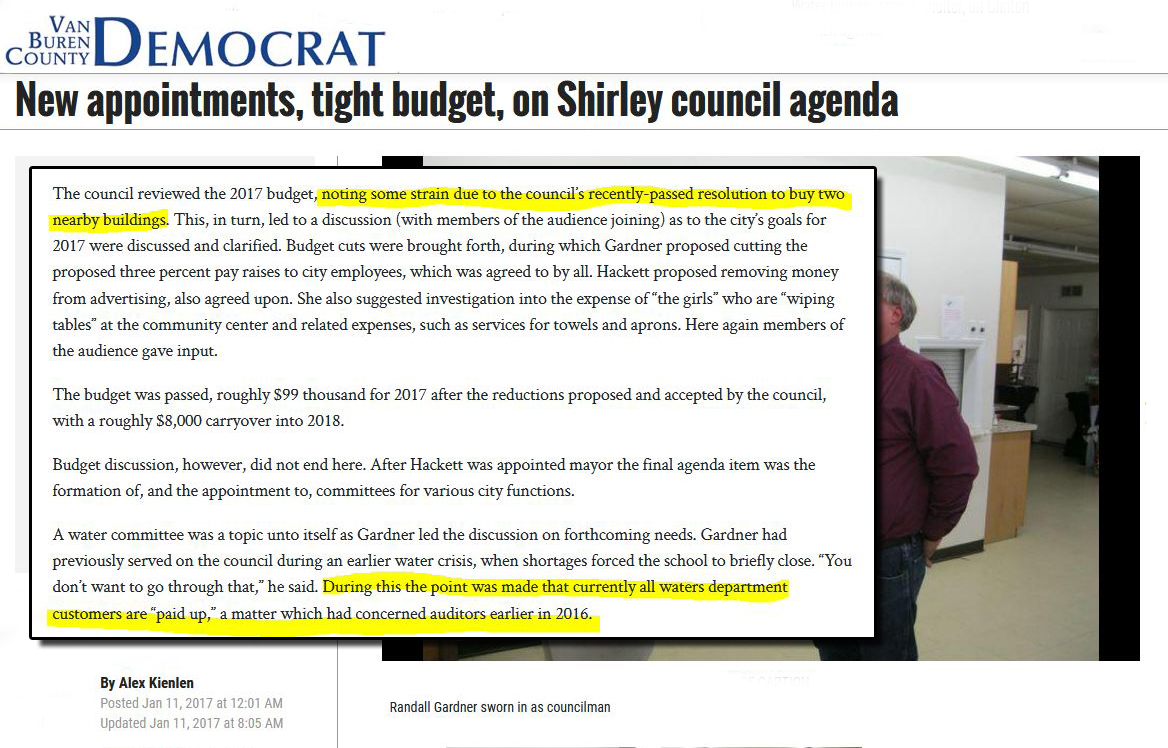 The article also described the receipt by the city of an anonymous letter that listed several allegations of wrongdoing by former fraudulent mayor Sowell. 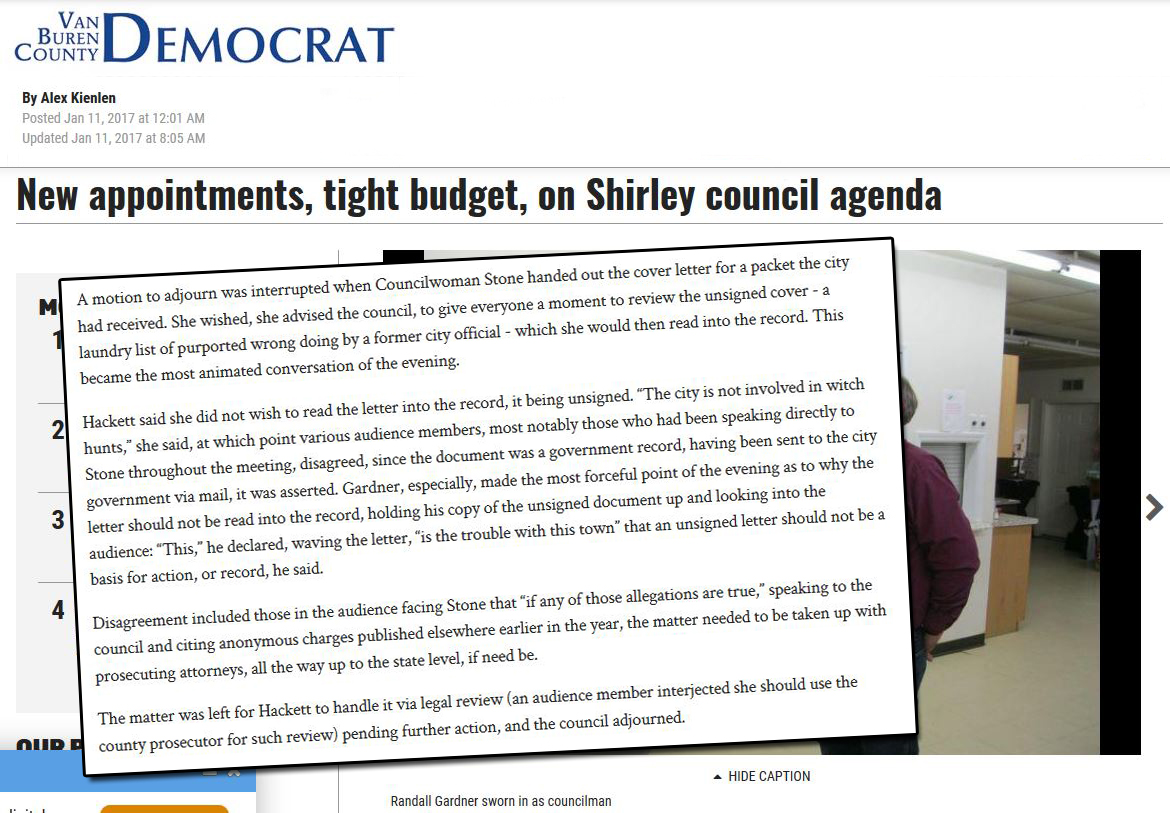 That letter detailed allegations about Sowell using a grant from the US Department of Agriculture to make improvement on the road leading to his home which was outside the city limits and not a permissible use of the funds (something that Sowell seems to do a lot with public funds).

Perhaps the city, now realizing that Sowell was not eligible to run for, much less hold, the office of mayor was setting in.

We know that part of the roadwork paid for by the grant was for John Henry Road, which was partly in the city, but not Guffey Lane. CLearly Sowell using his ill-gotten position to receive personal benefit.

Other allegations included Sowell using a contractor to do work who leased trucks from Sowell.  A clear conflict and violation of the law.

The documents that have been sent to us and the material we have obtained on our own are quite considerable and indicate serious issues that point to wrongdoing by Sowell.

Not only were they interesting to us.  The Federal Bureau of Investigation thought they were too and initiated and investigation after requesting we provide them with information we have gathered.

To be continued in Part 4.