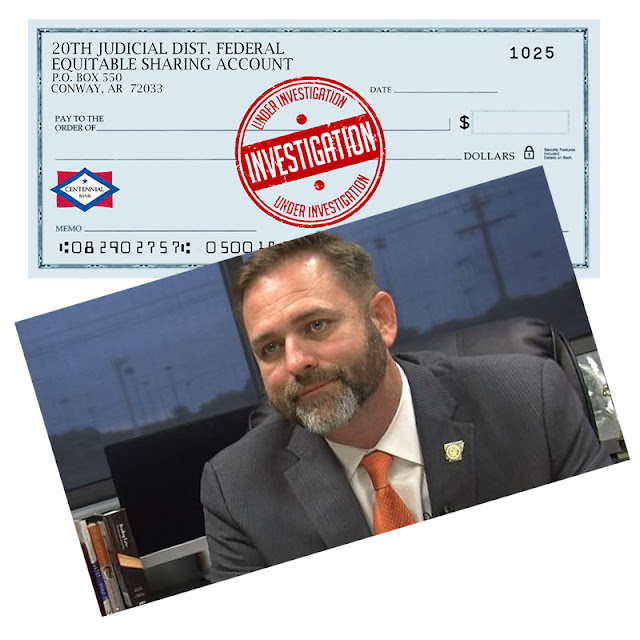 Records obtained from Cody Hiland as a result of a  Freedom of  Information lawsuit, indicate that Hiland improperly co-mingled funds received from two Federal Agencies and used those funds for prohibited purposes.

In response to inquiries we made to the US Department of Justice, Bryan Bokin,  Equitable Sharing Program Manager with the DOJ, asked us to send him the checking account documents we obtained from Hiland in the FOI lawsuit. 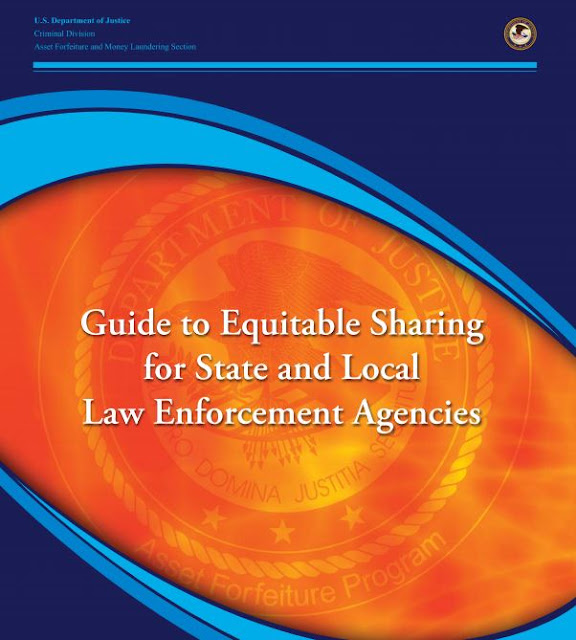 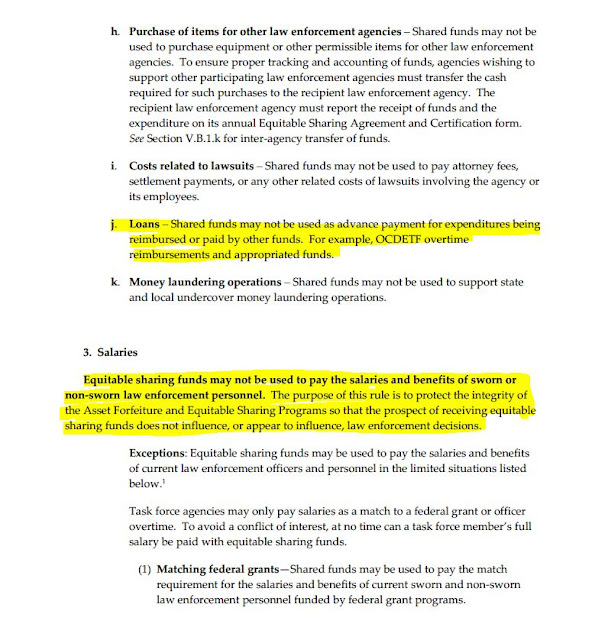 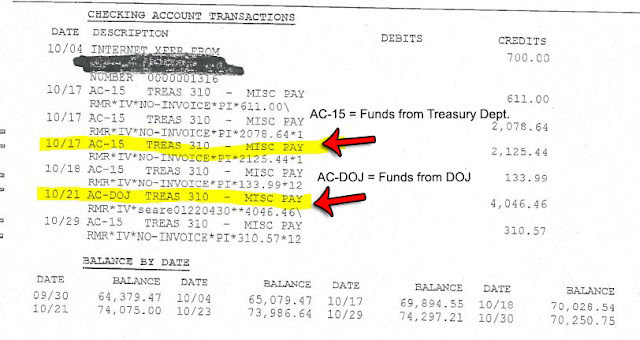 This is a major program violation. 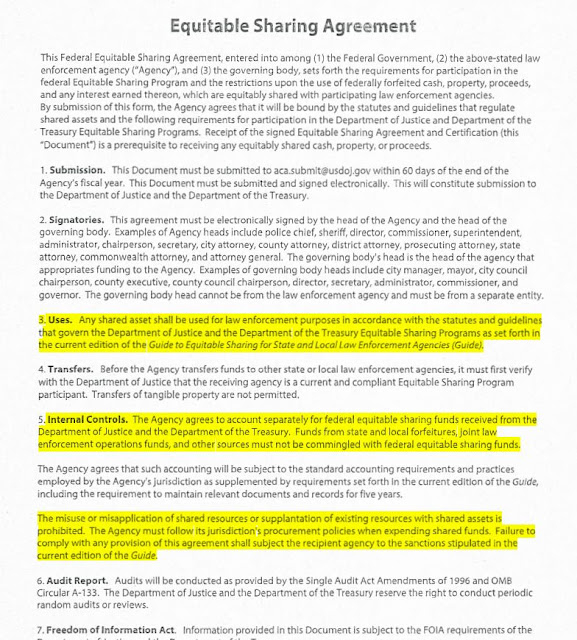 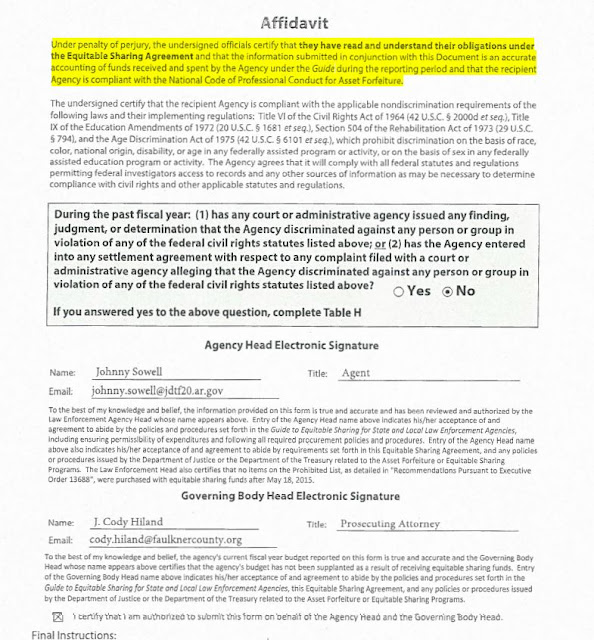 Another huge problem for Hiland are unsanctioned "loans" from the commingled funds for prohibited purposes. 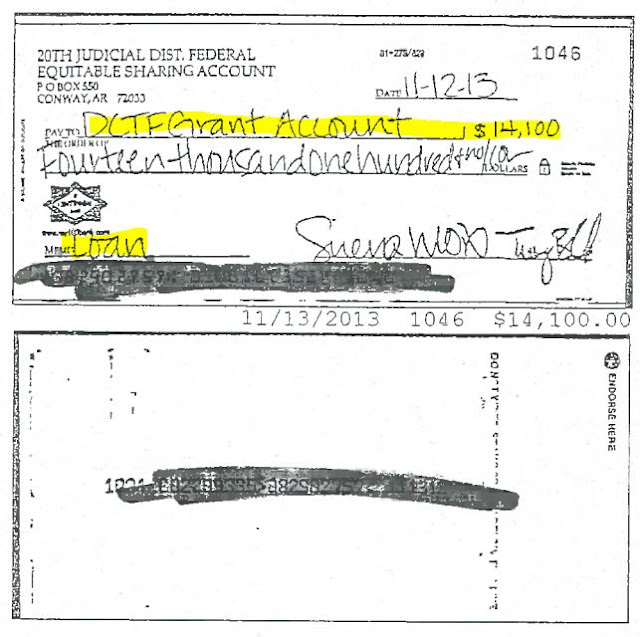 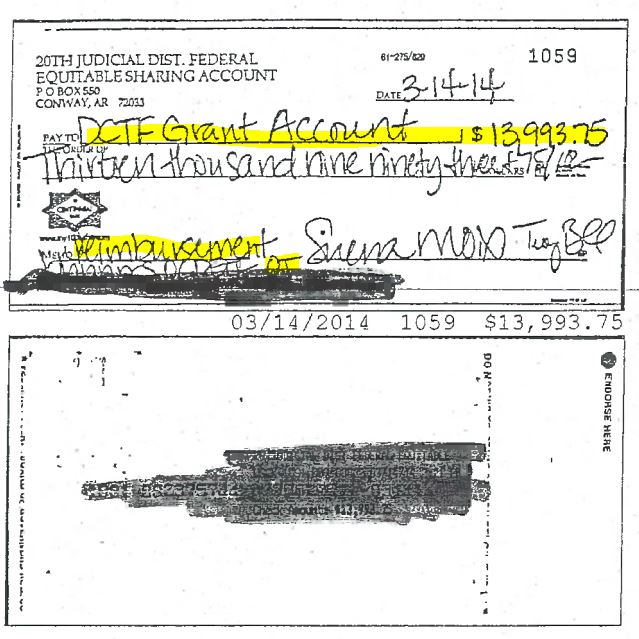 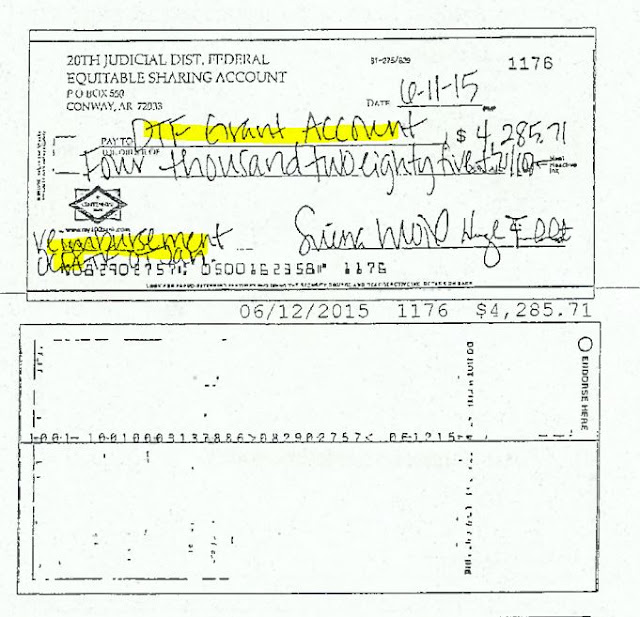 The agreement that Hiland signed with the DOJ addressed the fact that funds could not be used for loans, payroll or Organized Crime Drug Enforcement Task Forces ("OCDETF") overtime.  These are a few examples of these violations and there are many more.
Hiland also used these funds for mysterious shortages and overages. 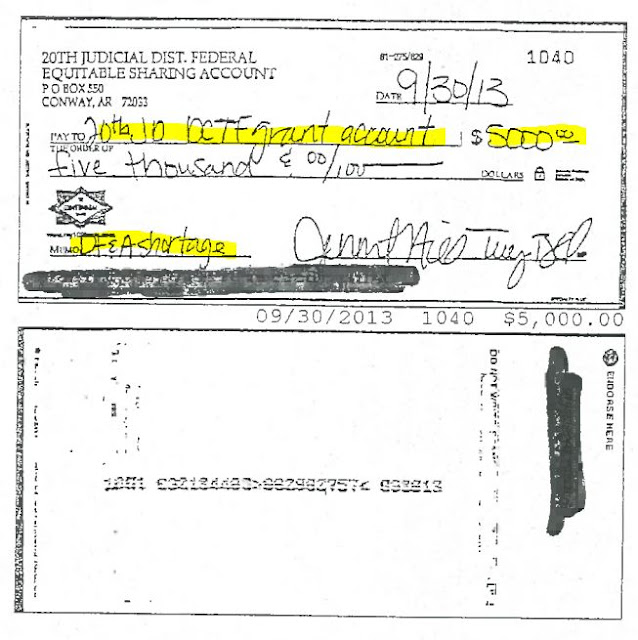 This check was to New Tech Well Services for transportation of suspects. Unbelievable. 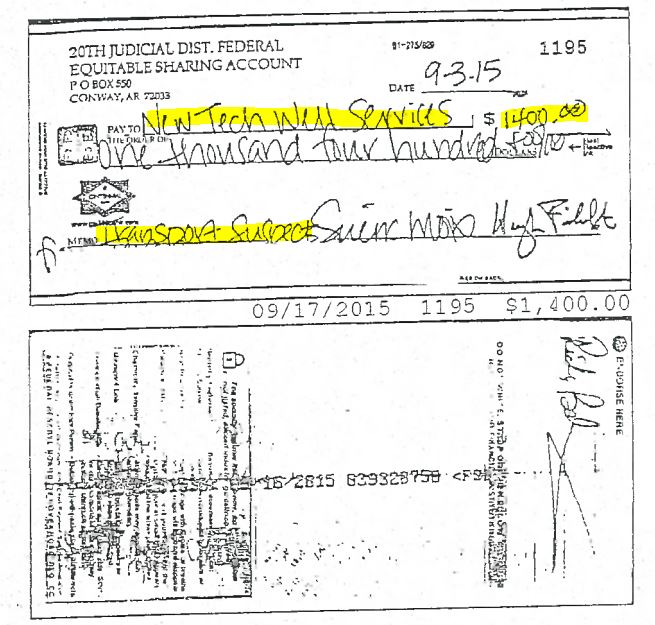 Here's one for some BBQ. 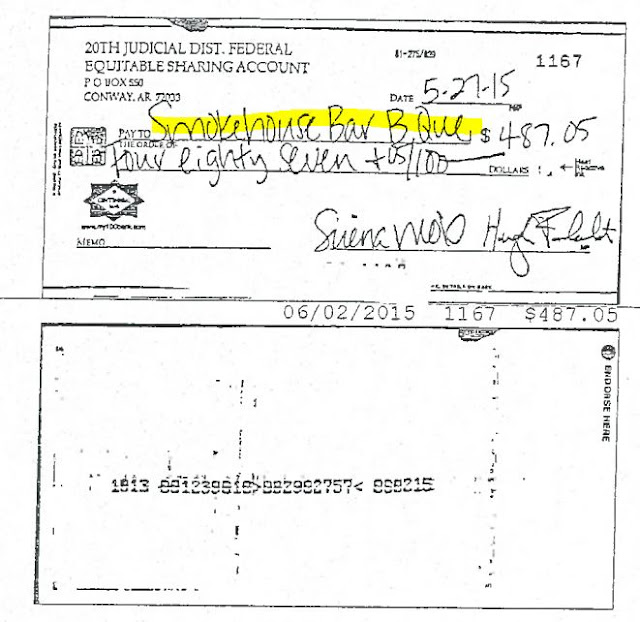 This one was used to pay a credit card bill.  The DOJ will want to have a look at the bill to make sure that program guidelines were followed. 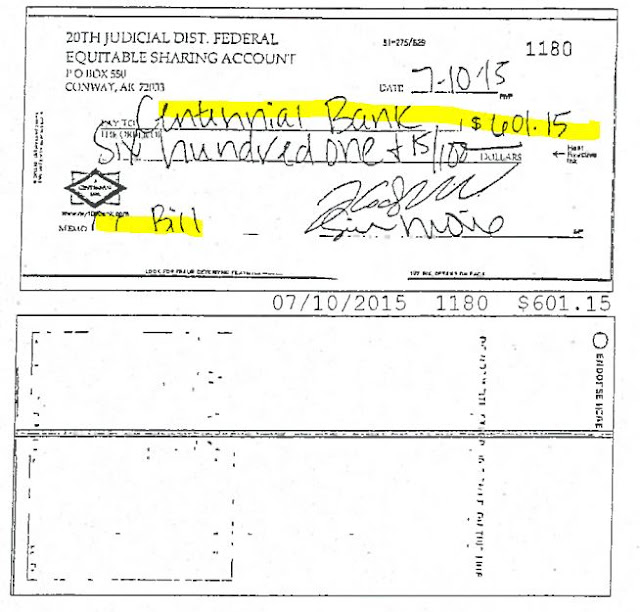 It also appears that Hiland improperly used the Federal funds to pay retirement benefits and overtime to the Arkansas Public Employees Retirement System ("APERS") for Johnny Sowell, who along with Hiland signed agreements with the DOJ. 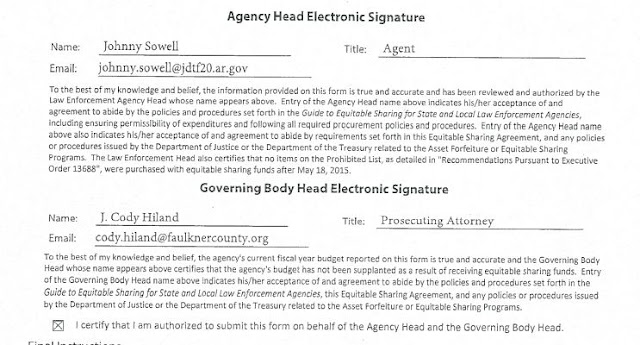 We have submitted a Freedom of Information request to Hiland for copies of checks and monthly statements for the checking account in which funds from the Arkansas State Police Special Asset Forfeiture Fund are deposited.

Hiland used very little of the fund to go to law enforcement agencies in his district to purchase equipment.  He did write a check to the Department of Finance and Administration/Alcoholic Beverage Control so that his former employee, tainted ABC Enforcement Director Boyce Hamlet could purchase his agents bullet resistant vests. 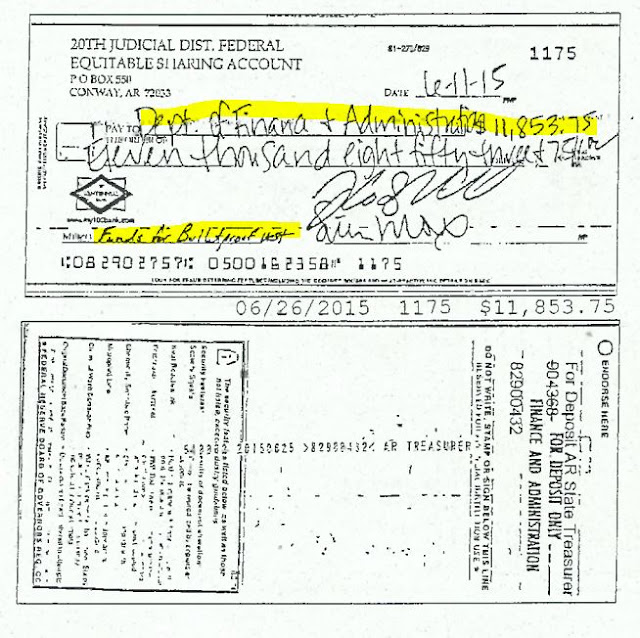 This was an inappropriate, but legal, use of these funds in that the ABC had access to over $200,000.00 that could have been used to purchase the vests.

The vests were a questionable purchase by the ABC in that the Enforcement Agents deal basically with compliance matters and send kids into bars and stores to try and buy booze, while they sit in a car outside.  The kids are not wearing vests.  How dangerous can it be?  No ABC agent has been shot or killed while working.  One was killed in his home back in 1976, but that had nothing to do with him being an ABC employee (click here for details,the information is near the end of the post).
There are rumors  that Hiland may be appointed as president of UCA, even though he has no degree in education nor does he have any experience in any type of educational institution administration.
UCA unfortunately has a history of corrupt leadership, so Hiland who seems to have that corruption thing in common, might end up there if Governor Hutchinson has his way.