A former district judge accused of taking inappropriate photographs of misdemeanor defendants in exchange for lenient sentences has been indicted on 21 federal charges, including bribery and fraud, according to a grand jury indictment that was unsealed Monday.

Boeckmann resigned in May 2016, hoping to end an inquiry regarding allegations of judicial misconduct. 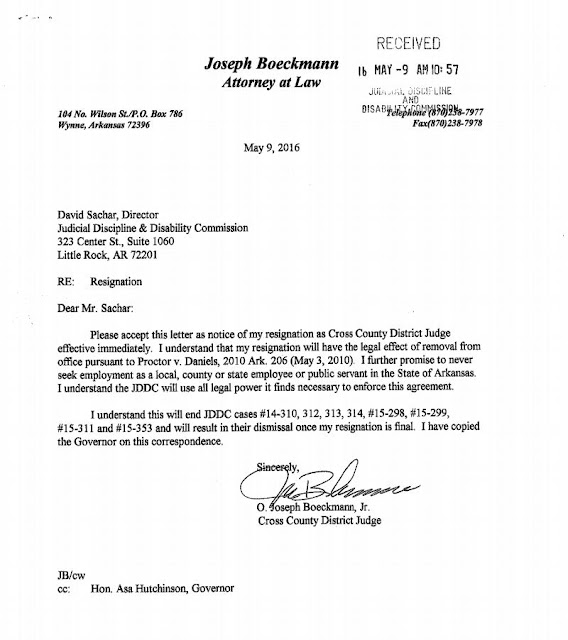 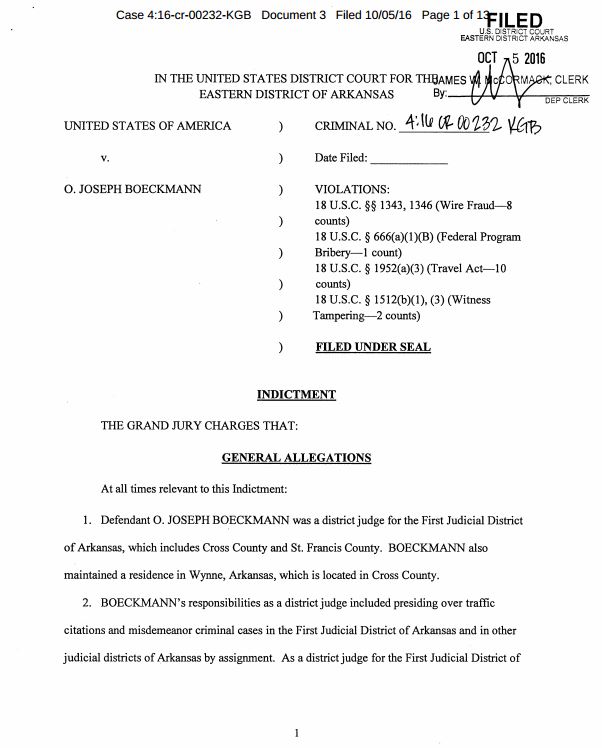 Boeckmann appeared before U.S. Magistrate Joe Volpe on Monday afternoon in Little Rock. He will return to court Wednesday for a bond hearing.

The grand jury, which convened Oct. 4, found that Boeckmann used his position as a judge "corruptly" to "obtain personal services, sexual contact and the opportunity to view and to photograph in compromising positions those who appeared before him in traffic and misdemeanor criminal cases in exchange for dismissing the cases."

The indictment said nine male defendants between the ages of 16 and 22 were told that if they did "community service," Boeckmann would dismiss their cases. In many cases, the indictment said, the judge gave his personal telephone number to the defendants.

The indictment added that Boeckmann would photograph defendants as they picked up litter in "compromising positions." In one case, the judge offered a defendant the option to have his case dismissed by being photographed naked, or while fondling himself or being paddled on his bare buttocks, the indictment said. 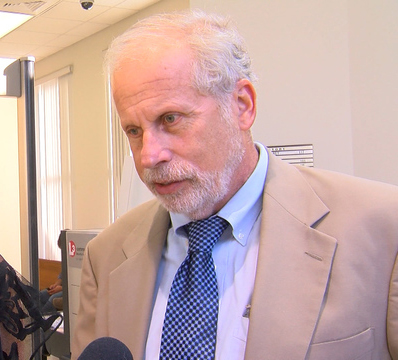 In December, Boeckmann denied allegations of wrongdoing made by the state Judicial Discipline and Disability Commission.

In a response to the commission Dec. 15, Rosenzweig wrote that Boeckmann denied any sexual or "otherwise improper motivation for any photography." He said that any pictures taken were "solely for the purpose of recording proof of community service."

Emily White, deputy executive director of the Judicial Discipline Commission, said Boeckmann's case was "one of the worst in judicial misconduct" in Arkansas' history.


"Any day I can turn my investigation over to law enforcement and get an indictment, we've done our job," White said Monday.

"The overwhelming majority of judges in this state are honest, fair and hardworking people," White said later in an emailed statement. "Mr. Boeckmann was an exception to that norm. I trust that the criminal conduct we uncovered through our ethical investigation will be fully handled by the agencies responsible for overseeing those areas of law."

Boeckmann, who was elected district judge in 2008, resigned in May and agreed never to seek public office. Filings by state ethics officials said Boeckmann's alleged inappropriate behavior dates as far back as the 1980s when he was a deputy prosecutor.

The day after Boeckmann resigned, three men who appeared before the judge on misdemeanor and traffic charges from 2009 to 2013 filed civil lawsuits against him. One plaintiff alleged Boeckmann photographed him naked and touched him. Another claimed he helped Boeckmann remove pornographic images from the judge's computer.

The indictment claims Boeckmann defrauded Cross, St. Francis and Crittenden counties; the cities of Wynne, Parkin and West Memphis; and the state courts of fines, fees and costs to which they were entitled to by dismissing the cases.

The indictment said Boeckmann would instruct defendants to pick up aluminum cans or litter and take them to the judge's house, or he would tell them to go to his house and he would go with the defendants to a location to pick up the trash.

Once Boeckmann finished photographing or paddling the person, the community service was deemed complete and the judge would dismiss the person's case, the indictment said.

"Boeckmann made ... false and fraudulent representations regarding the disposition of the cases," the indictment reads. "Those false and fraudulent representations were reflected in the docket sheets and other court documents related to the cases [of the defendants] stating the cases had been dismissed by reason of 'community service.' In fact, the actions performed ... at Boeckmann's direction were not performed for the purpose of 'community service,' but rather for Boeckmann's personal benefit."

The judge is accused of attempting to bribe one of the defendants to conceal what he had done. He is charged with witness tampering because the judge threatened another defendant to tell false information about Boeckmann to investigators, the indictment said.

Boeckmann also is charged with using interstate wires to defraud the state when he called and texted two defendants in Tennessee and texted another defendant between Nov. 1, 2014, and May 27, 2015, to tell him about each person's "community service," authorities said. 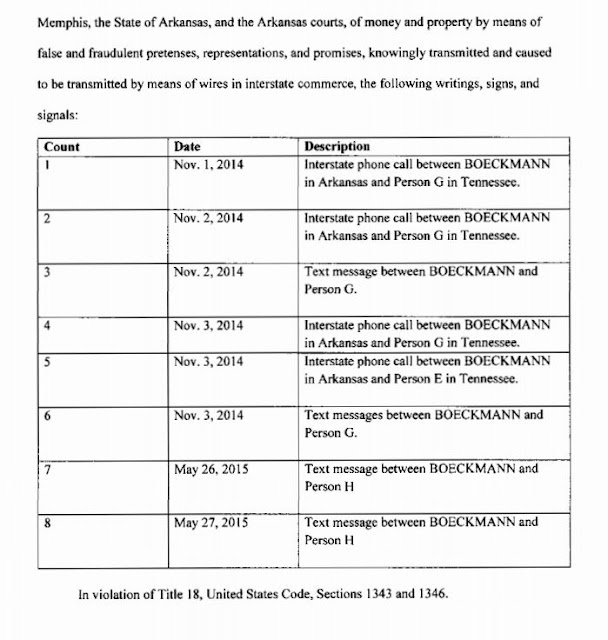 Boeckmann faces 10 charges of the violation of the federal travel act because he made telephone calls and enticed someone to travel from Tennessee to Arkansas, authorities said.

Want more information?  Here are some interesting articles about this case:

This is not the first time Boeckmann has been involved in sketchy judicial behavior.

In 2011, Boeckmann received a Letter of Admonishment from the Arkansas Judicial Discipline & Disability Commission for violating judicial canons. 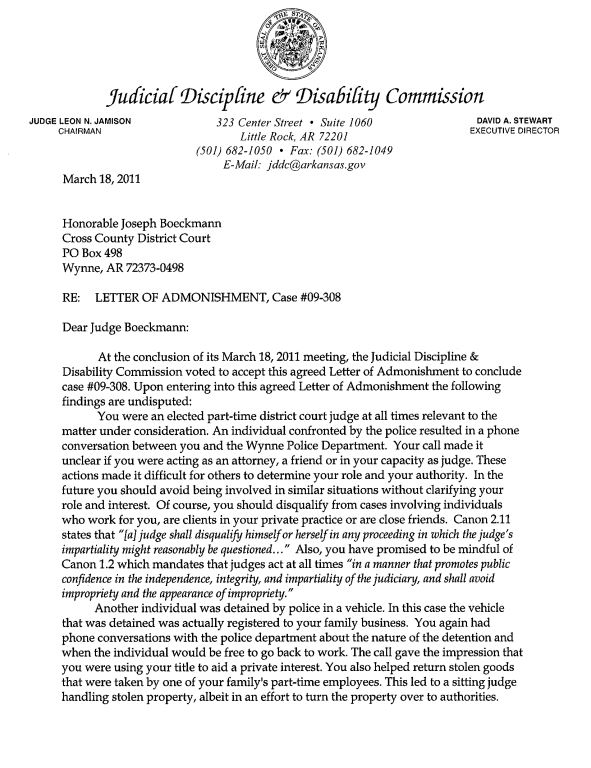 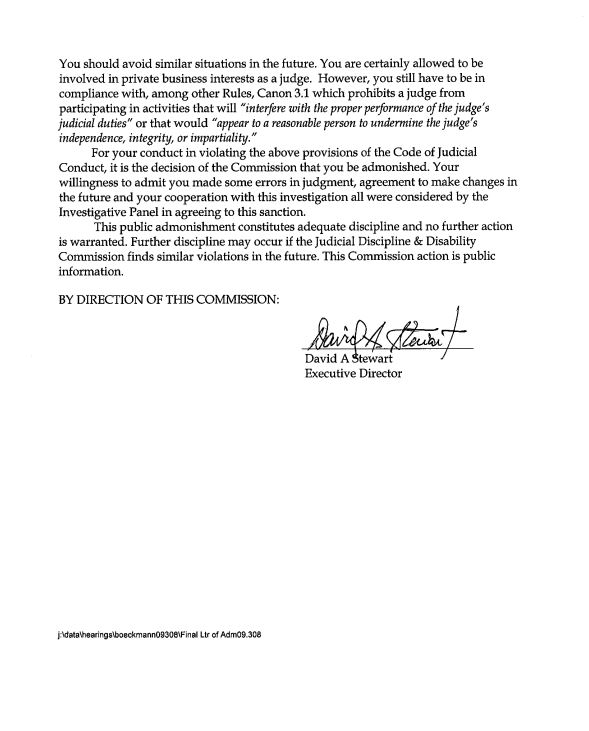