Devante' D. McCarter,  an Arkansas Department of Correction ("ADC") Correctional Officer 1,  after only being on the job for 4 months locked himself in a guard tower with a weapon and refused to come out for 12 hours.

The strange event took place at the Delta Regional Unit in Dermott on Saturday, October 1st. 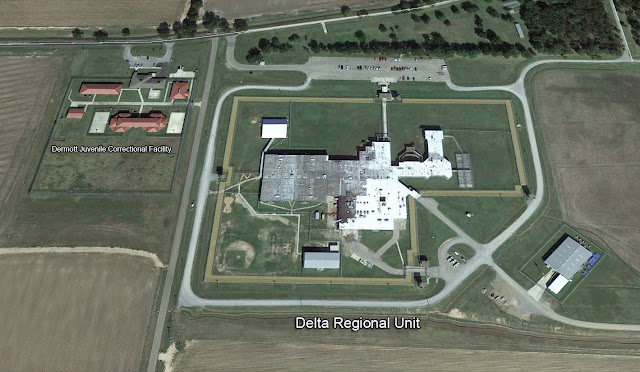 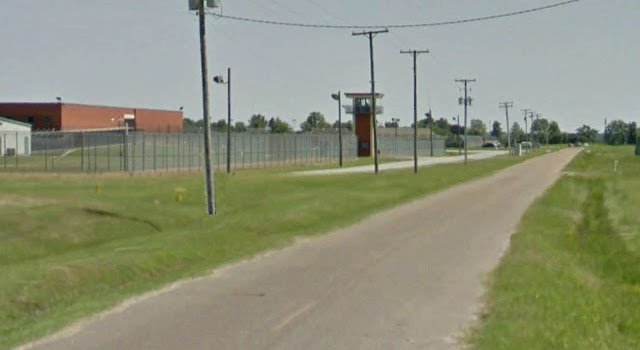 When ADC Public Information Officer Solomon Graves gave a statement to the press he stated, "Earlier today, ah, ark... Arkansas daaah, Arkansas Department of Correction staff along with officers from the Arkansas State police responded to a situation, ah, here at the Department".

Graves used the word "situation" multiple times and did not want to give more details than to say that it was a "situation". 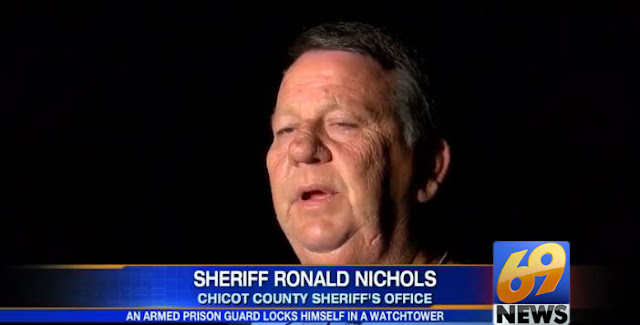 Sheriff Nichols told reporters that a stand-off between an armed ADC guard who locked himself in a tower refused to come out and the State Police ended peacefully after a 12 hour negotiation.

The prison standoff began Saturday morning, and state police were called to render assistance about 11 a.m.

Nichols said he was not notified about the situation until about 1:30 p.m. He was disappointed that state authorities had initially tried to handle it without telling him, he said.

The guard was not identified at the time, but later McCarter, 24, of Greenville, Mississippi was identified as the barricaded guard that was taken into custody and taken to the Drew County jail.

McCarter is being held without bond on a charge of Commercial Burglary, a Class C Felony.  His arraignment is set for Monday October 3rd. 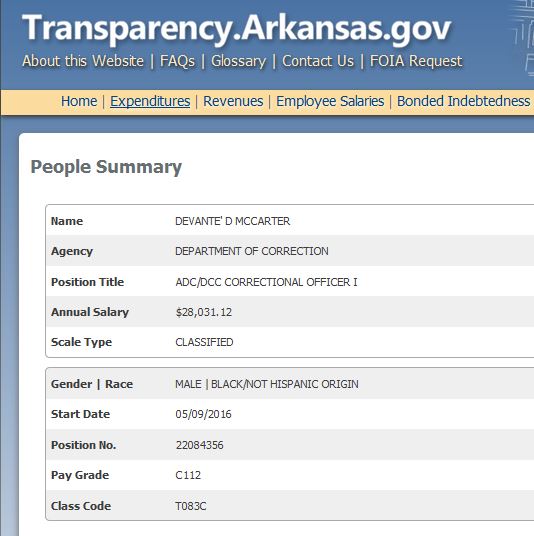 These positions require minimal experience and a valid Arkansas Driver's License.  They must have waived that for McCarter as he is a resident of Mississippi. 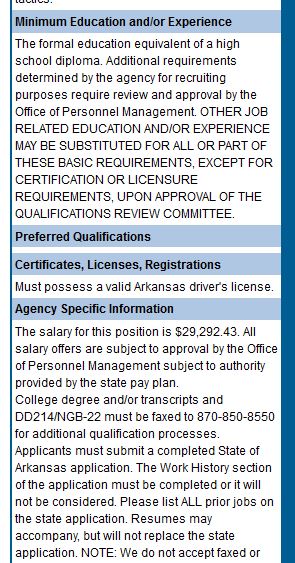 
Authorities declined to discuss what led the 24-year-old officer to barricade himself inside an observation tower at the Delta Regional Unit in Dermott. State police say the guard had access to a rifle and refused orders to leave the tower, leading to the standoff.

A guard in a blue shirt could be seen pacing in the tower Saturday afternoon, and Department of Correction Director Wendy Kelley was overheard talking on a radio to someone in the prison.


"We know you've been up there for a long time and are probably hungry. Let us help you," Kelley said.

Negotiators also were heard talking to the guard by radio Saturday evening. At one point, they were heard ordering Popeye's chicken for him and asking him to talk about himself. 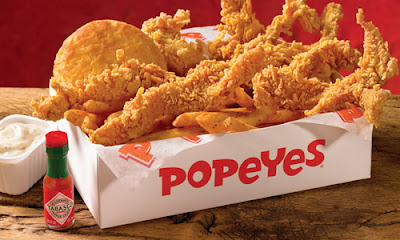 McCarter did not respond to most of the questions, though at one point he asked to speak to another guard.

After the truck left, two armored cars, a pickup and an ambulance drove onto the prison grounds around 8 p.m.

Graves himself has only been on the job since April and perhaps he could use a little training on public speaking. 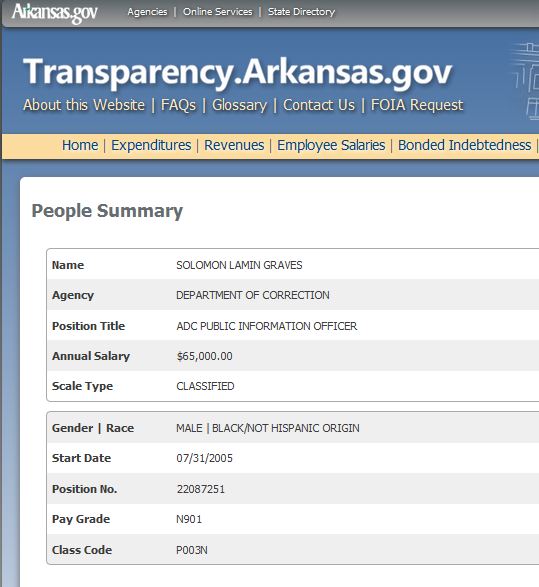 One would think that for $65k a year, Graves would be a little more professional and forthcoming about a "situation" that put fear in citizens of Dermott and all over Southeast Arkansas. 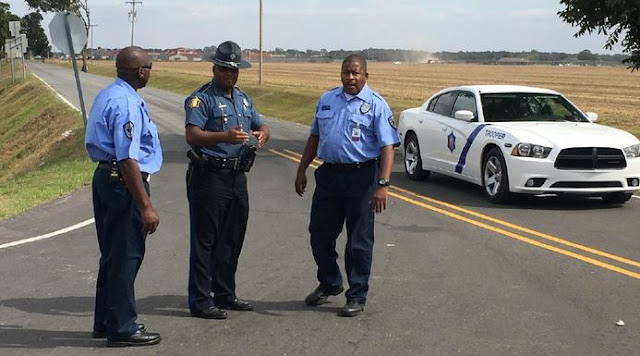 An article that appeared in a ADC publication when Graves was hired, indicated that he was the person that got to tell the stories of the ADC employees. 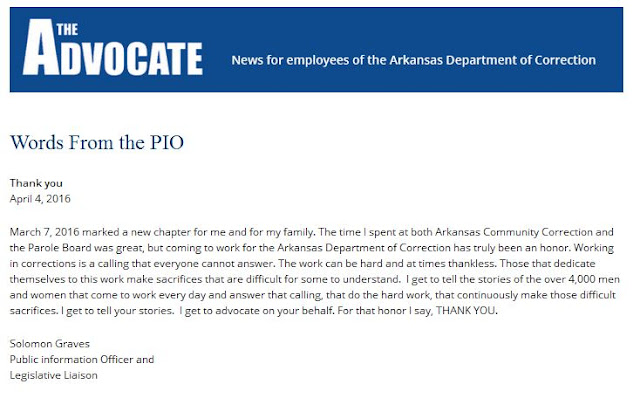 Apparently he does not want to get the story out about why McCarter did what he did and what transpired during the 12 hour stand-off anytime soon.


We will provide updates as more information becomes available.

It seems odd that Deen would say that as the ADC public relations officer Solomon Graves told reporters on Saturday that the "situation" did not disrupt normal prison operations and there was no lock down.

And the Dermott police and Chicot County Sheriff's Office were not made aware of the "situation" until approximately 4 hours after the state police were called to assist.

Thomas Deen, prosecuting attorney for the 10th Judicial District, said he will request a mental health evaluation of a prison guard arrested after a standoff at an Arkansas prison Saturday, an unusual request planned partly because the man's behavior seemingly lacked "purpose."

Devonte Deshaun McCarter, 24, of Greenville, Miss., faces a felony charge of commercial burglary and a misdemeanor charge of impairing operation of a "vital public facility," according to Deen.

McCarter, armed with a rifle, refused to leave a guard tower at the Delta Regional Unit in Dermott for several hours despite a supervisor's orders, authorities said.

The standoff prompted two neighboring juvenile centers to lock down their facilities for about 10 hours and is the subject of an ongoing Arkansas State Police investigation.

No one was injured, no shots were fired and "at no time were any inmates endangered," Arkansas Department of Correction spokesman Solomon Graves said.

"It does not appear [McCarter] wanted to harm himself or anyone else," Graves said. "Throughout the entire process, he never made any demands. We don't have any idea as to why he chose to hole up in the tower."

McCarter, hired as a corrections officer in May, is on paid leave pending the outcome of internal and police investigations, Graves said.

The state police investigation is solely focused on "the failure of this individual to comply with orders to leave the tower," spokesman Bill Sadler said.

McCarter made his first court appearance Monday afternoon before Ashley County District Judge Reid Harrod, but was not arraigned because court officials had not formally received the charges. Bail was set at $25,000.

McCarter's court-appointed attorney, Joseph Mazzanti, could not be reached for comment.

Deen is filing charges in Chicot County, where the prison is located. Deen's request for a mental health evaluation will be made after a judge is assigned to the case, he said.

Defense attorneys occasionally request mental health evaluations of their clients, who can be spared of criminal liability if it's determined they were mentally unfit at the time of the crime.

"There's nothing specifically that precludes it, but it is rare for the state to request [a mental health evaluation], especially this early," said Berry, who was not familiar with the facts of McCarter's arrest and did not comment directly on the case.

Deen, who said he couldn't remember independently making such a request, said it's "appropriate" this time because of the circumstances.

"Nothing [McCarter] did [Saturday] was remotely logical or sensible," Deen said. "He seemed to have no purpose. He had no demands. He engaged in just some bizarre, unexplainable conduct."

The present-day evaluation can suspend criminal proceedings if it's determined a defendant does not understand the charges, cannot assist counsel or is otherwise unfit to proceed.

The look-back tries to determine whether the defendant had the mental capacity to tell right from wrong and conform to the law. If not, that could lead to an acquittal "on a ground of mental disease or defect," according to Arkansas Code 5-2-312.

The Correction Department conducts criminal background checks and drug screenings on job applicants but does not require a mental health evaluation as part of the hiring process, Graves said.

If convicted of commercial burglary, McCarter would face between three and 10 years in state prison. Impairing operation of a vital public facility is a misdemeanor with a one-year maximum sentence.

Arkansas Code 5-39-201 says that a person commits commercial burglary if he or she "enters or remains unlawfully in a commercial occupiable structure of another person with the purpose of committing ... any offense punishable by imprisonment."

McCarter was assigned to work a 6 a.m.-to-6 p.m. shift Saturday inside the tower, Graves said. A supervisor instructed McCarter to leave the post -- Graves wouldn't say why -- and the guard refused, the spokesman said.

Graves referred all questions about the timeline to a state police statement. In that statement, police say they were called in about 11 a.m. and that McCarter surrendered shortly before 8 p.m.

Two neighboring juvenile facilities spent 10 hours on lockdown, meaning no staff or residents could exit the building, Arkansas Department of Human Services spokesman Brandi Hinkle said. The facilities are about 100 yards from the prison, Hinkle said.

The Delta Regional Center, about 70 miles southeast of Pine Bluff, opened in 1990 and has a capacity of 599 inmates, according to the Correction Department.

The prison was not locked down, Graves said.