The Arkansas Military Department is in a bad situation due to actions of a former employee, Carla L. Daniels.

We first learned about Daniels last year and began looking into her and allegations made about her.

Daniels, until her resignation during an internal investigation, was the Fiscal Division Manager. 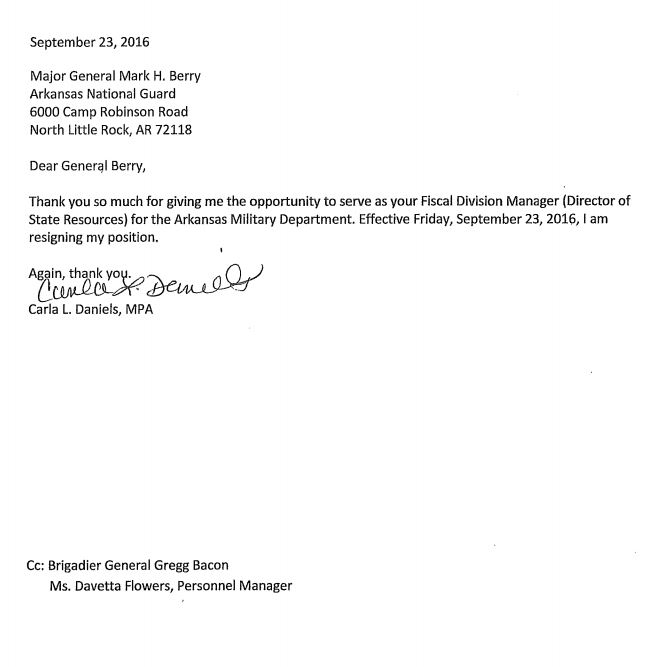 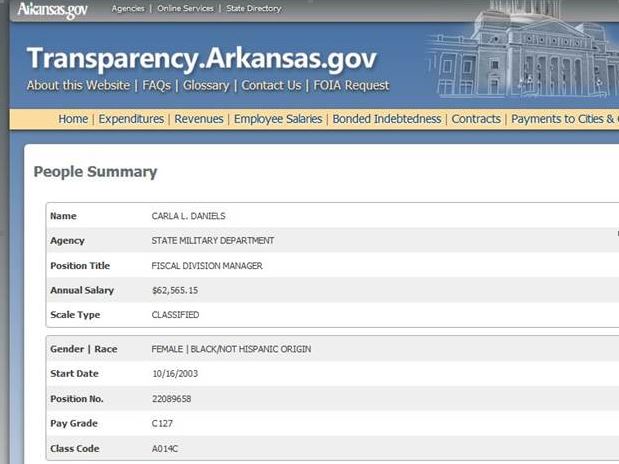 The internal investigation at the state resources department started in June 2016 with an anonymous letter, filled mostly with accusations about Daniels, the way she was hired, her conduct on the job and alleged nepotism.

Lt. Col Joel Lynch said that the administrative leave was, "not just anything Ms. Daniels had done...but the overall policies of the state resources department. We're looking into that to see what happened and make sure everything's done correctly." 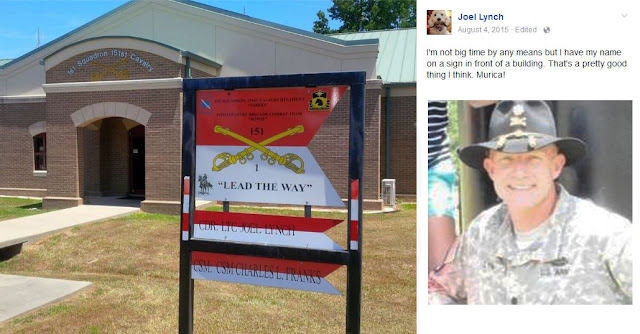 Apparently multiple complaints about her behavior and a lawsuit in Federal Court filed against her and the Military Department (keep reading)  must have slipped Lt. Col. Lynch's mind.

Many current and former coworkers revealed Daniels's history of temper tantrums at the office, the hiring of her own son and documents showing she should have never been hired in the first place.

"It's all part of the investigation, which we really can't comment on the details right now," Lt. Col. Lynch said. "We'll see how it all comes out. It wasn't a 100-percent slam dunk, if you will."

"It became kind of clear that we needed to go to our separate corners and do that," Lt. Col. Lynch said. "Let's get the situation kind of calmed down while we sort through and complete the investigation."
When asked if her resignation took the department by surprise, Lt. Col. Lynch said, "Honestly, you'd have to talk to every individual in there. There's just a lot of dynamics going on in there right now."

When asked what kind of message her resignation sends to her employees and the rest of the state military department, he responded, "The situation that's been going on the past few months, obviously there's a lot of friction in there just because people have been sending anonymous letters, contacting the media and those kind of things so it was a tough situation. No matter what the outcome was going to be, it was really hard to accomplish the mission of the department of state resources."

While someone else temporarily heads up the state resources department, Lt. Col. Lynch expects the investigation to wrap up soon, answering what consequences, if any, Daniels would face and how her resignation would impact them.

"That's going to be something for the legal department to sort out," Lt. Col. Lynch said.

He said the investigation's findings will also tell them what policies, if any, need correcting, including employees being aware of and using the National Guard's internal grievance process.

"That's clear that that didn't happen in this case," Lt. Col. Lynch said. "Somebody felt that this grievance process wasn't going to work for them or didn't know it existed. So that's one thing that comes from this. There is a process for this to come out so people don't have to go to the media or go to some anonymous letter to bring this to light. There's a way internally that we can look out for all of our employees."

Lt. Col. Lynch also wanted to stress this one incident is not indicative of the entire state resources department, or the military department and National Guard for that matter.

"Nobody wants to dwell on this," he said. "Everybody wants to work in a positive work environment, and this will hopefully identify some things we can do to make that environment happen, move forward and keep doing the work for the people of Arkansas."

Good thing Lt. Col. Lynch has a gas mask because his statements regarding Daniels stinks. 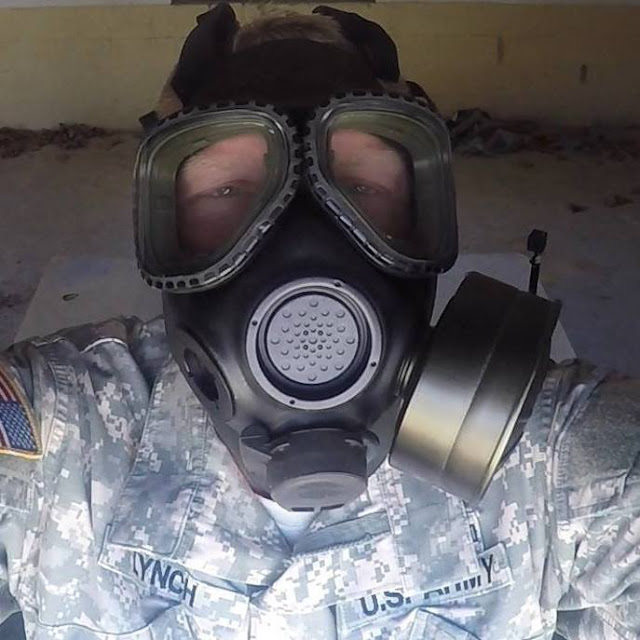 Daniels secured a position for her son, Rashaad Daniels, in the security department, even though at least two females had asked Pulaski County Circuit Court judges to issues an Order of Protection against him as a result of domestic violence and one Protective Order had been issued and is still in force at this time. 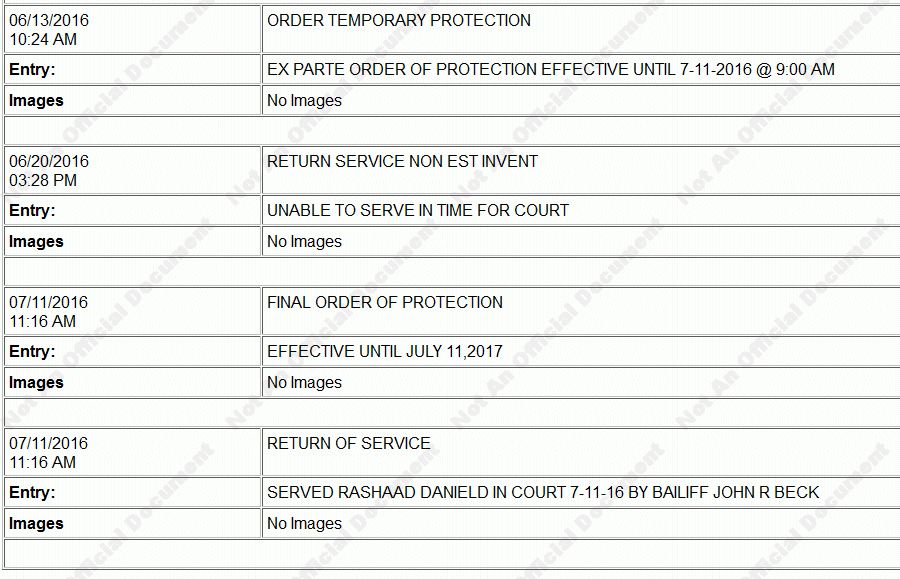 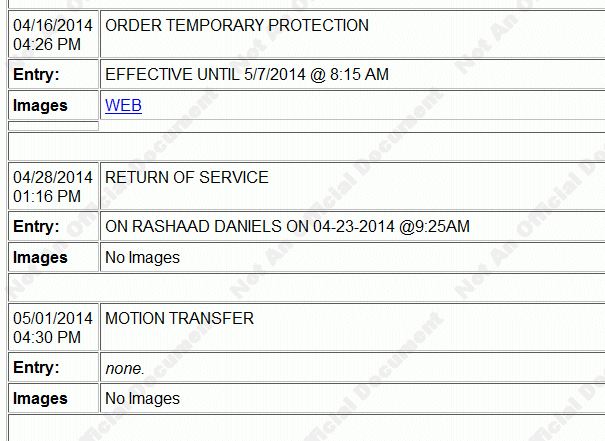 Rashaad also resigned the position his mother had obtained for him.

This is not Carla's first time to have work related controversy.

Records obtained from the city of Little Rock indicate that Daniels had been suspended in 2002 and again in 2003 shortly before they fired her. 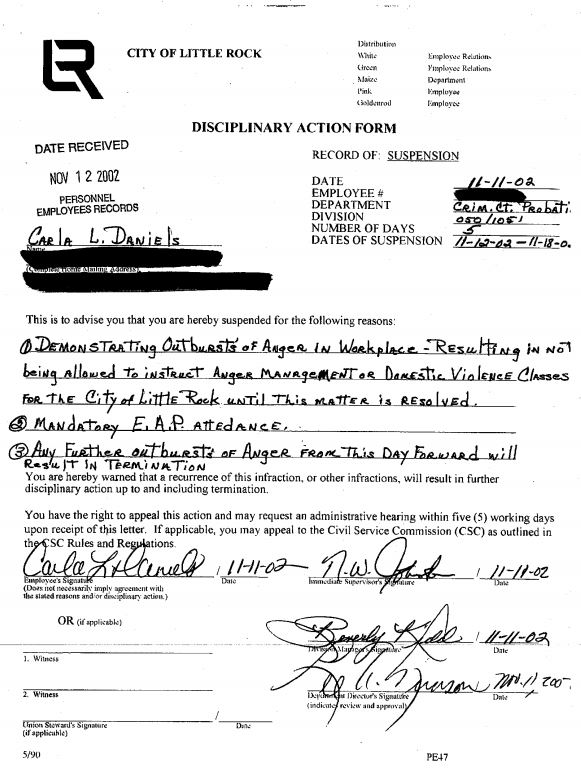 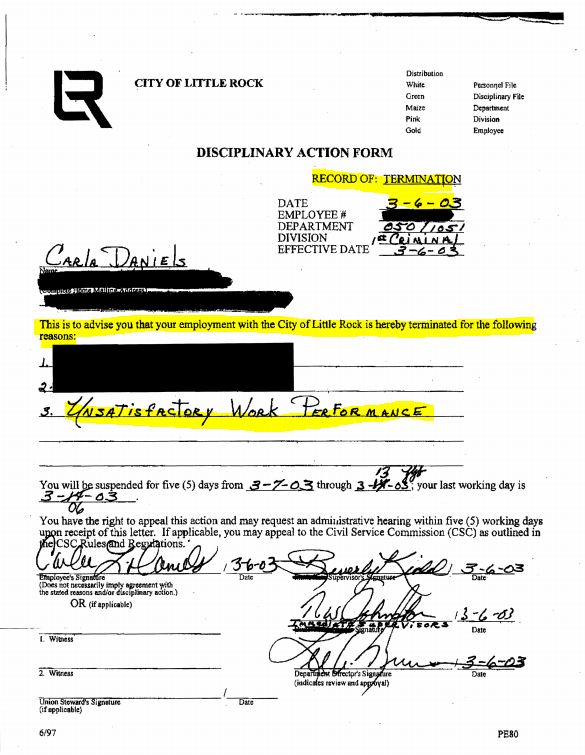 Daniels appealed her termination to the Little Rock Civil Service Commission, and they upheld the decision to fire her, but only for "unsatisfactory work performance".

We feel certain that reasons #1 and #2 had something to do with her abusive temper (they are redacted due to the decision of the Civil Service Commission). 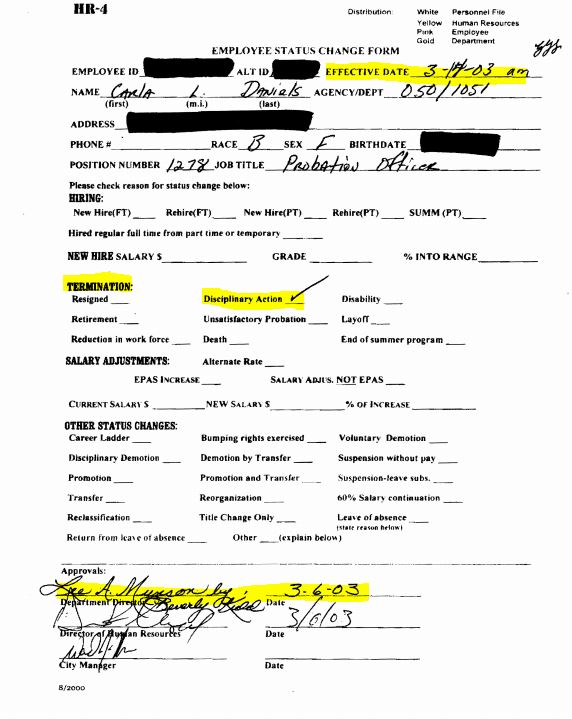 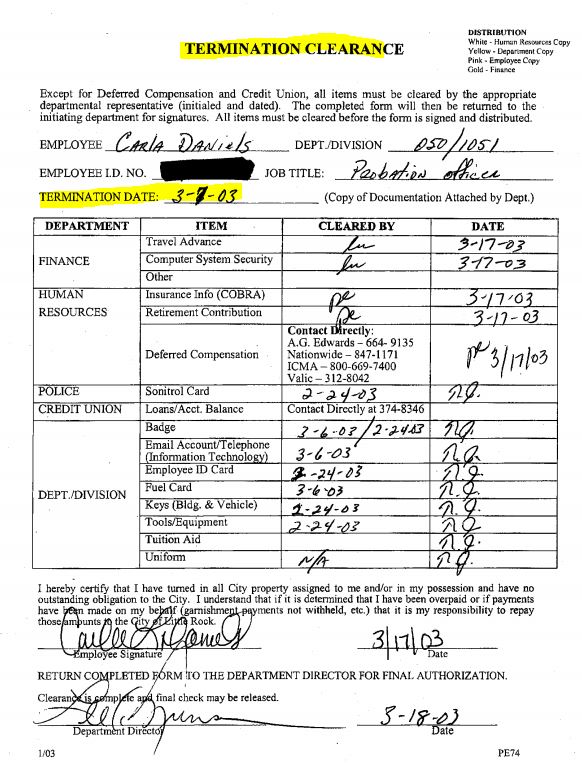 Then a strange thing happened. After the city fired her, they let her resign. 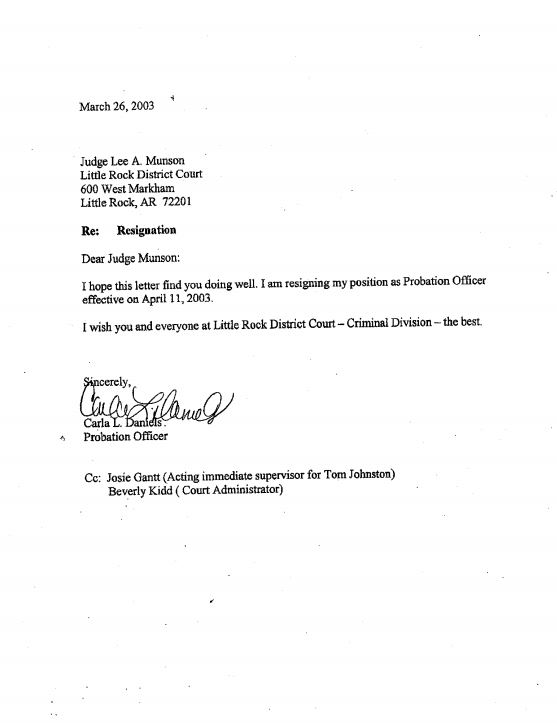 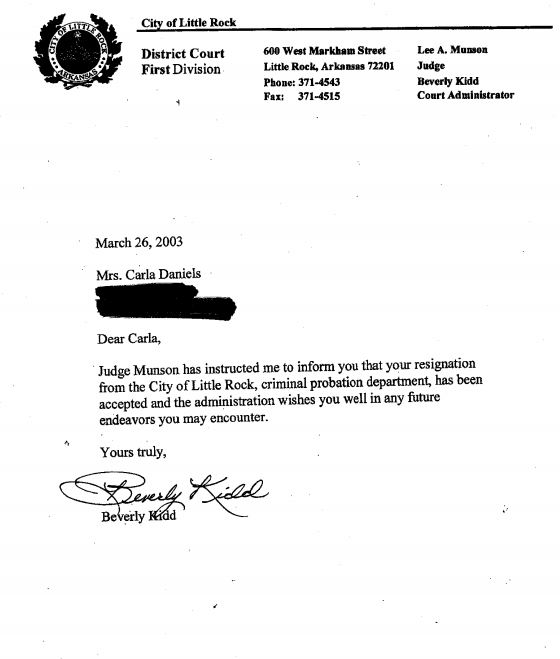 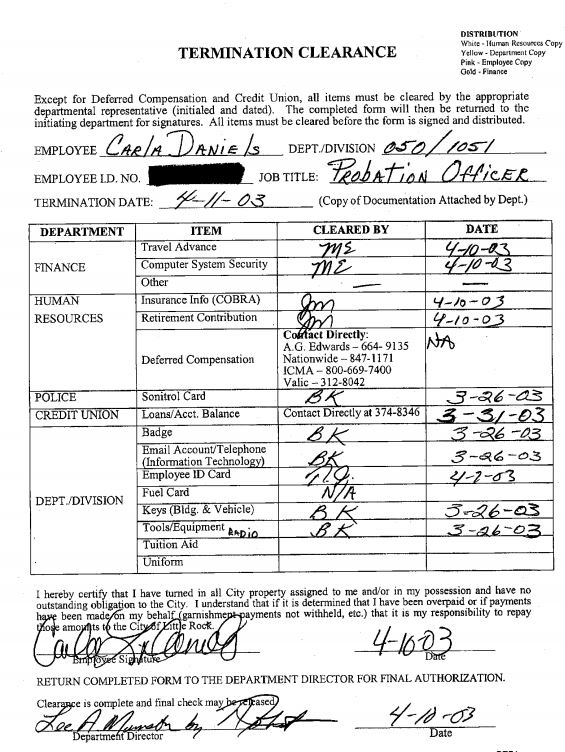 The city did not choose to respond to further questions about Daniels "resignation" after being fired.

CLICK TO VIEW DOCUMENTS FROM THE CITY OF LITTLE ROCK

Daniels holds (for now) certifications for Dispute Resolution Training and as a mediator.  How Daniels can hold these with her history of anger and outbursts is amazing and comical. 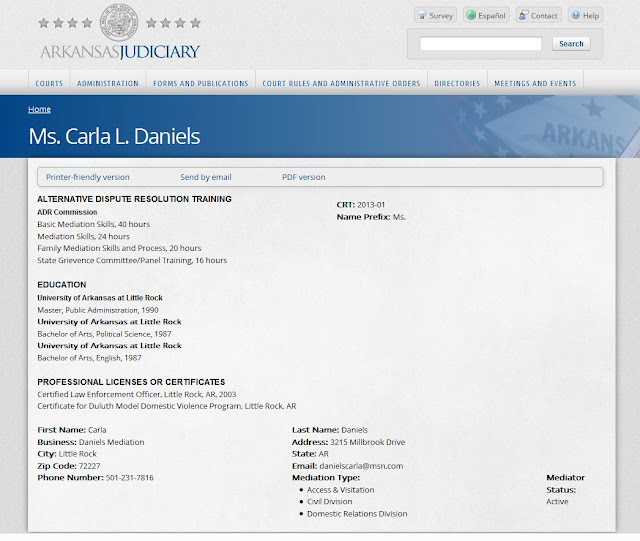 The big problem that the Arkansas Military Department has concerning Daniels is how they even hired her in the first place.

Documents obtained clearly show that Daniels was not high enough in the ranking process by an interviewing panel to even be considered for the position. 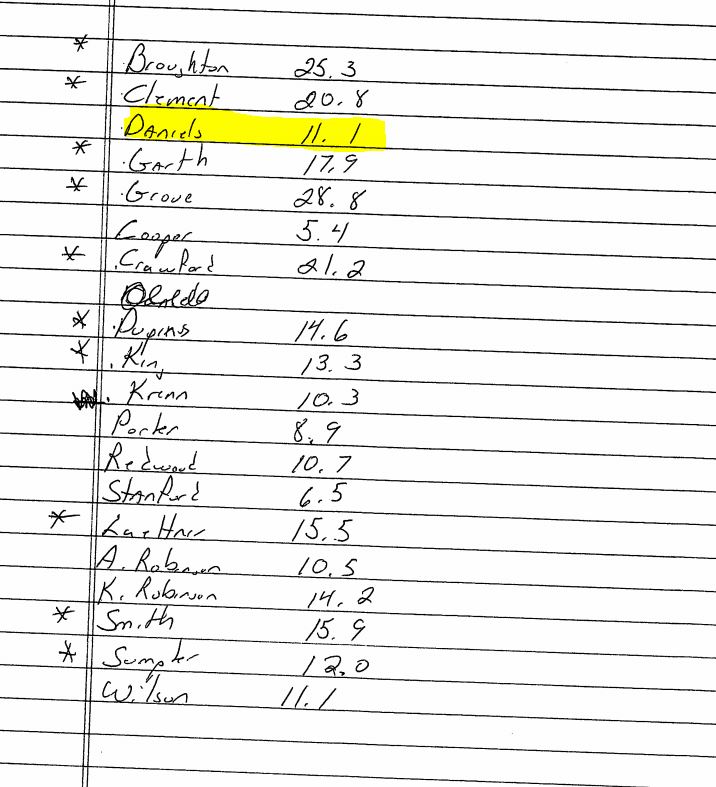 But somehow she made it on the list to be interviewed. 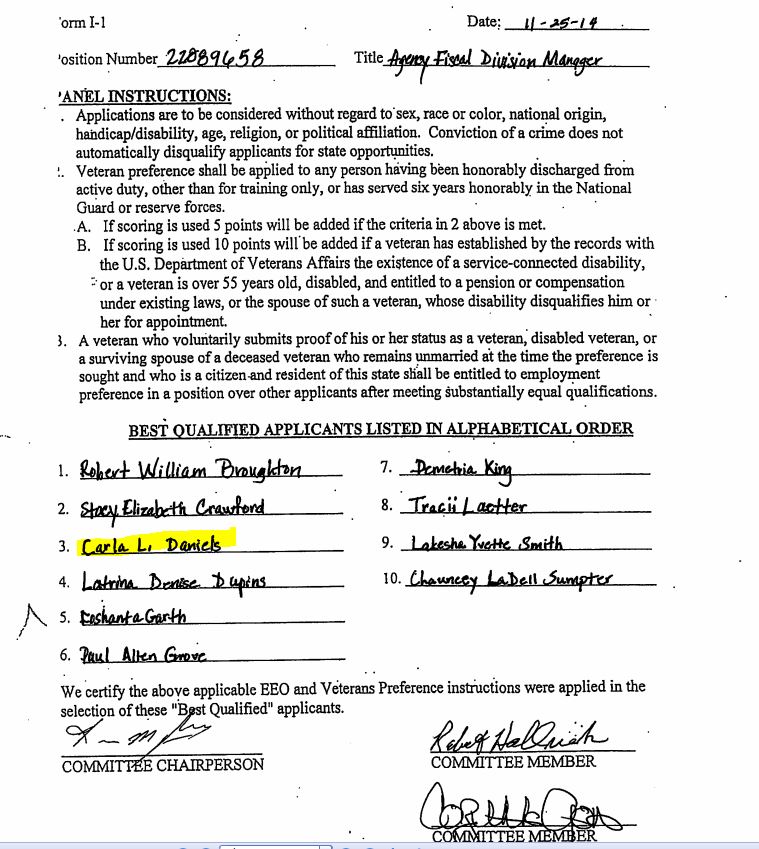 The Military Department has given a suspicious response to questions about Daniels hiring stating they do not rank applicants and have no explanation as to how the handwritten documents were in Daniels hire packet and personnel file. 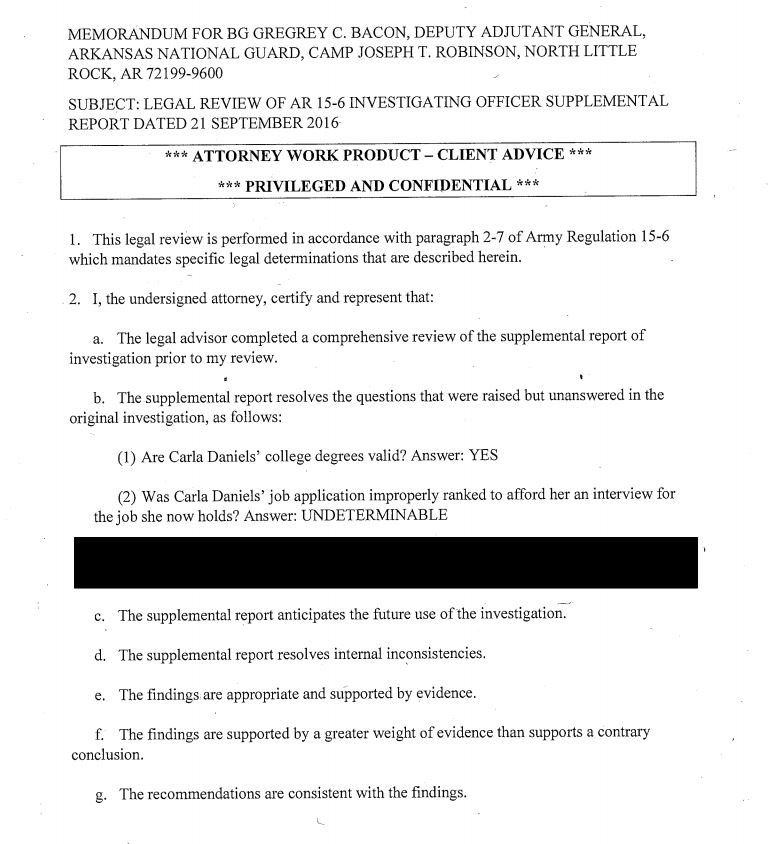 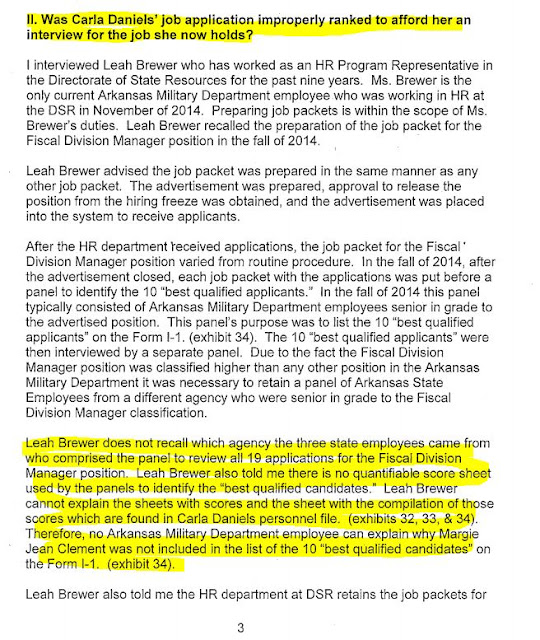 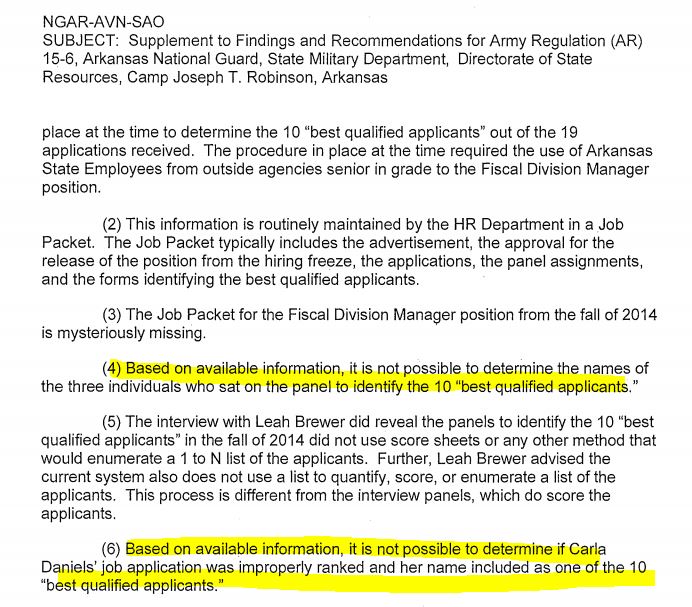 Apparently the Military Department investigators should be investigated.

Scroll up and look at the the bottom of the panel document.  See those signatures.  The Military Department investigators didn't.

And there is that problem with a lawsuit filed by estranged employee Karen Norris.  We use the word estranged because she was fired by Carla Daniels, then she won her job back in a grievance hearing, but the Military Department didn't give her her job back, hence the lawsuit. 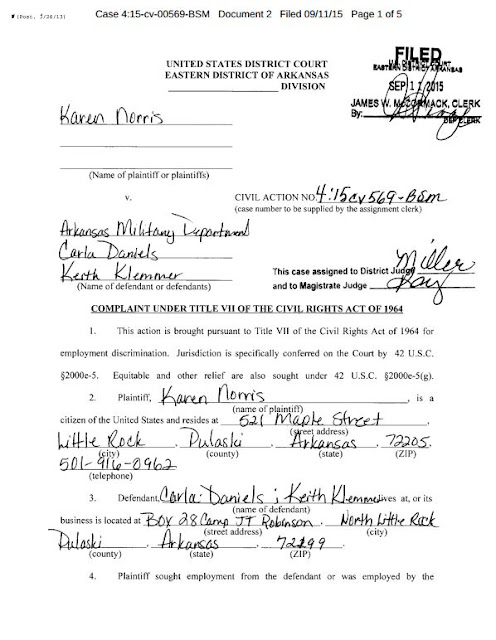 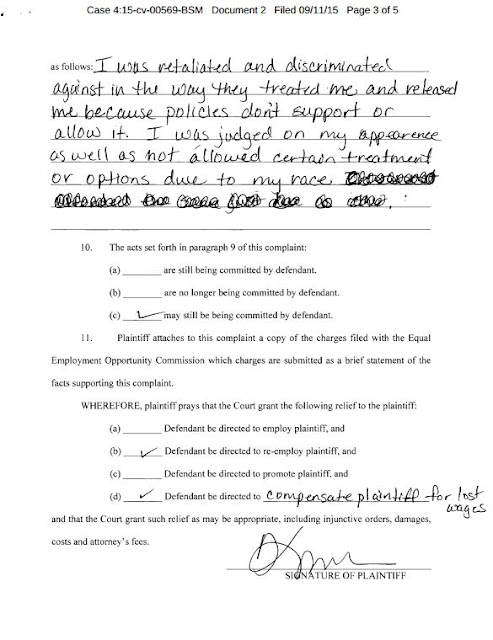 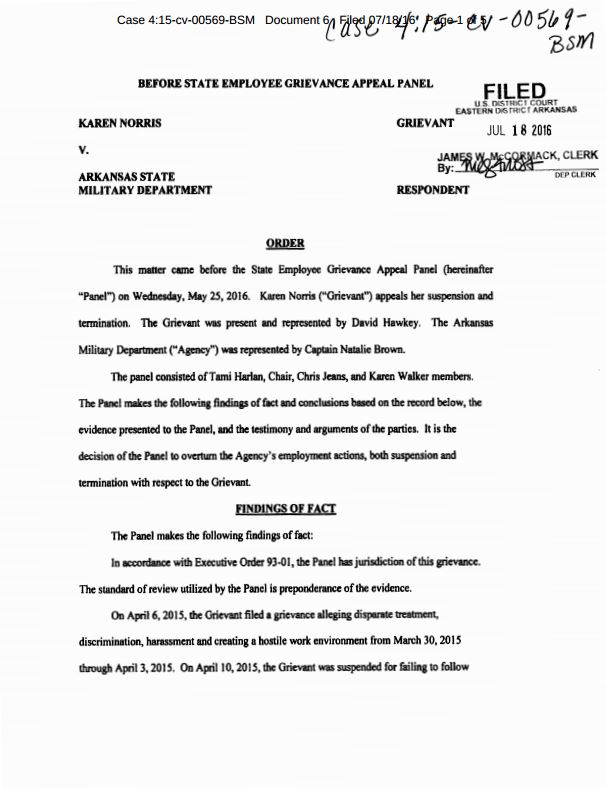 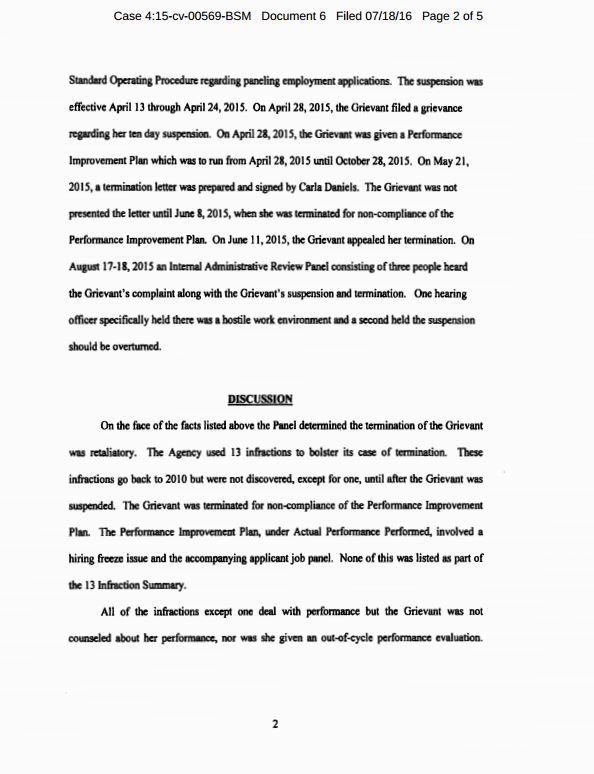 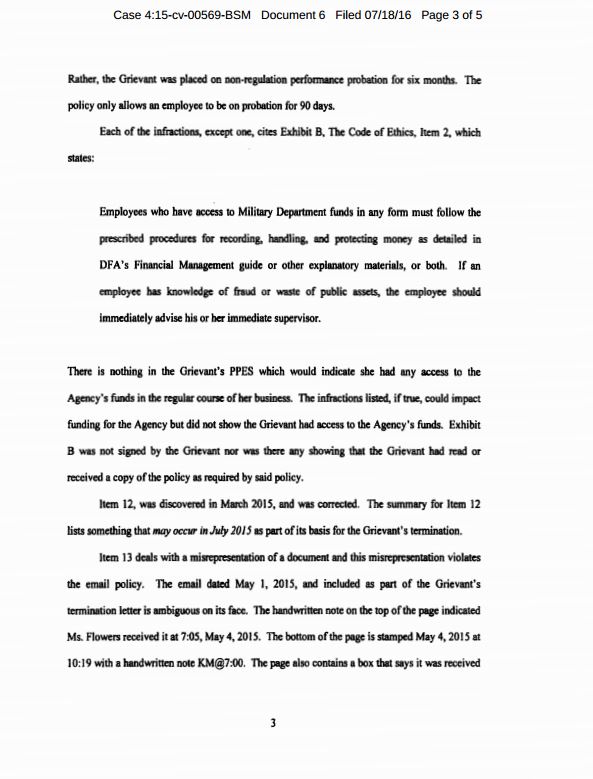 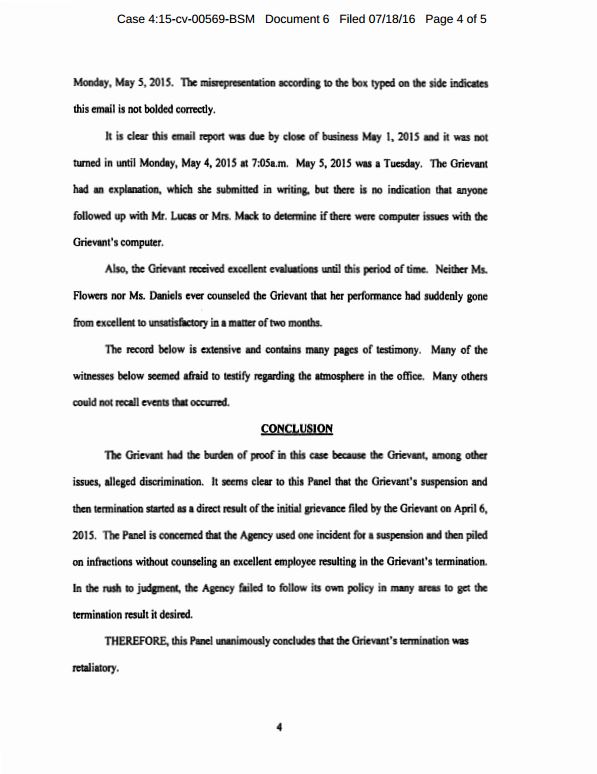 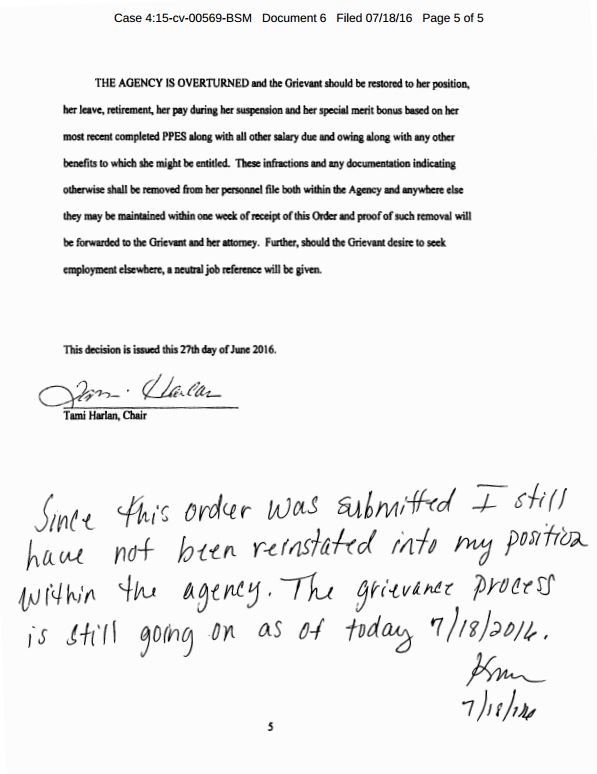 A quick look at Arkansas.gov and the state employee directory and transparency page does not have Karen Norris on the payroll at any state agency.

We did find some interesting information in emails of Daniels that the Military Department was less that excited to have to provide. 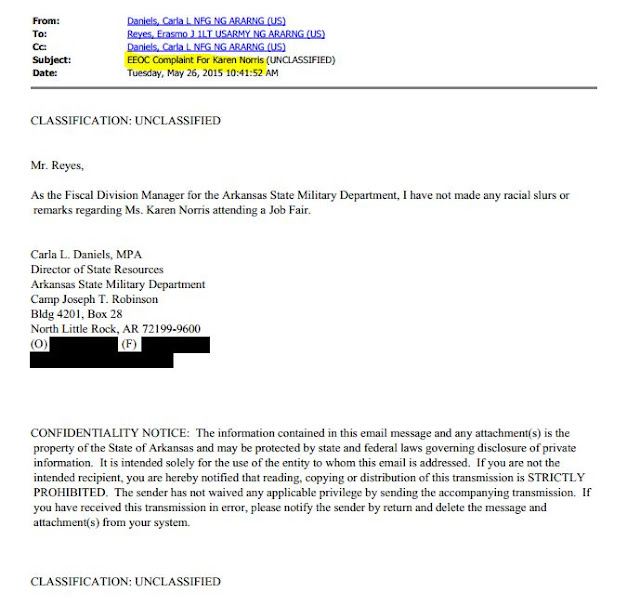 Norris' EEOC compliant was not founded. 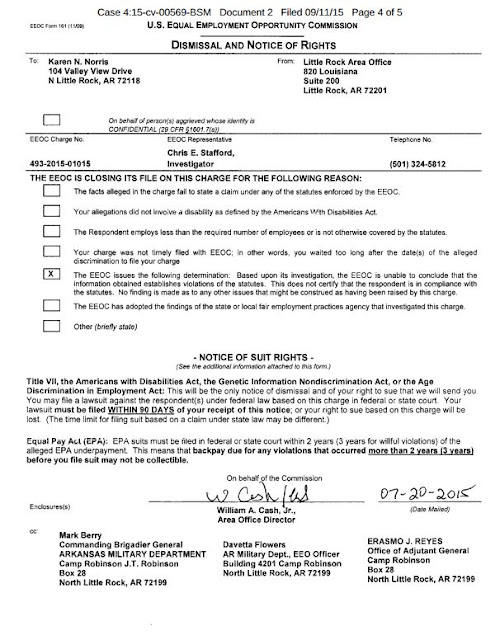 An email sent to Carla by a one of her employees sheds some light on the Norris matter as well as Carla's behavior. 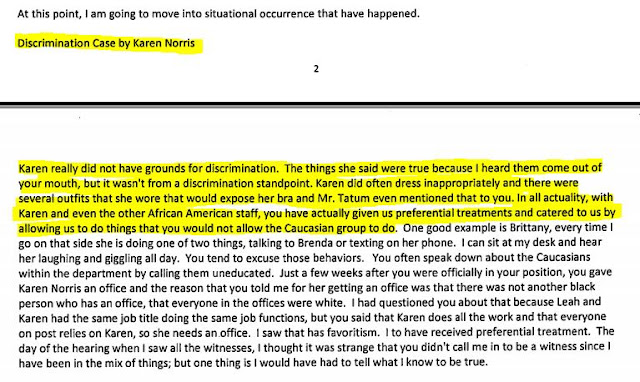 This mess will not go away anytime soon and more information is sure to come to the surface.

We will have another post in a few days about Daniels and how she used her connections and relationship with a Little Rock Police Officer to help her son Rashaad in one of those domestic violence court cases.