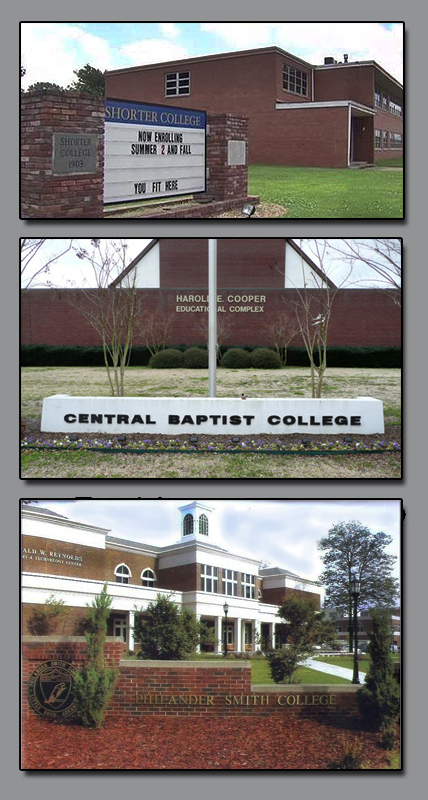 
"The reason for the distribution to the three private colleges is that these schools previously benefited from scholarships and grants that were terminated under the ArFuture legislation," Hutchinson said Friday in a written statement in response to a question about whether giving emergency funds to the three schools was part of a deal with Democrats to unstall the bill in the Senate Education Committee.

Since he became governor in January 2015, Hutchinson has set aside more than $750,000 from the Governor's Emergency Fund for more than 20 agencies and groups.

During the past decade, the largest amount spent out of the emergency fund was $472,500 in fiscal 2014, with $350,000 set aside for Pulaski County tornado debris removal, according to records of the state Department of Finance and Administration. Democrat Mike Beebe was governor then.

The latest flap over the emergency fund was in January 2007, when Gov. Mike Huckabee spent the last $13,000 in that fiscal year's $500,000 fund to partially pay the Department of Information Systems to crush the hard drives on the governor's office computers during the transition to Beebe's administration. 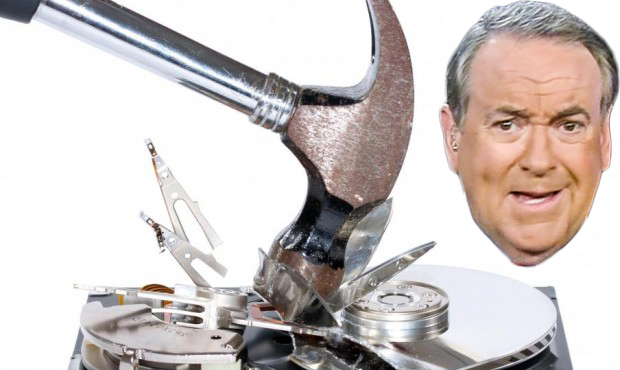 During the past 20 years, the most spent out of the fund was $868,483 in fiscal 2001, finance department records show. Huckabee, a Republican, set aside $240,000 for the Arkansas Development Finance Authority to use with federal funds to acquire 11 homes, relocate nine residents and help six homeowners replace their homes in Stamp near the former Red River Aluminum site, which some believed was the source of health problems.

Hutchinson's two largest proposed uses of emergency funds have been $100,000 apiece for the nonprofit group called Restore Hope and the Morgan Nick Foundation of Arkansas.

In August 2015, Hutchinson organized a two-day conference aimed at addressing problems with foster care and prisoner re-entry and called it the Governor's Restore Hope Summit.

In a proclamation dated May 20, 2016, he set aside $100,000 from the Governor's Emergency Fund for operational expenses of Restore Hope to unite and engage communities in meeting the needs of prison inmates and foster children needing homes.

A nonprofit group called Restore Hope Inc. registered with the secretary of state's office on Jan. 1, 2016, with J. Paul Chapman Jr. as its incorporator, organizer and registered agent, according to the office's website. 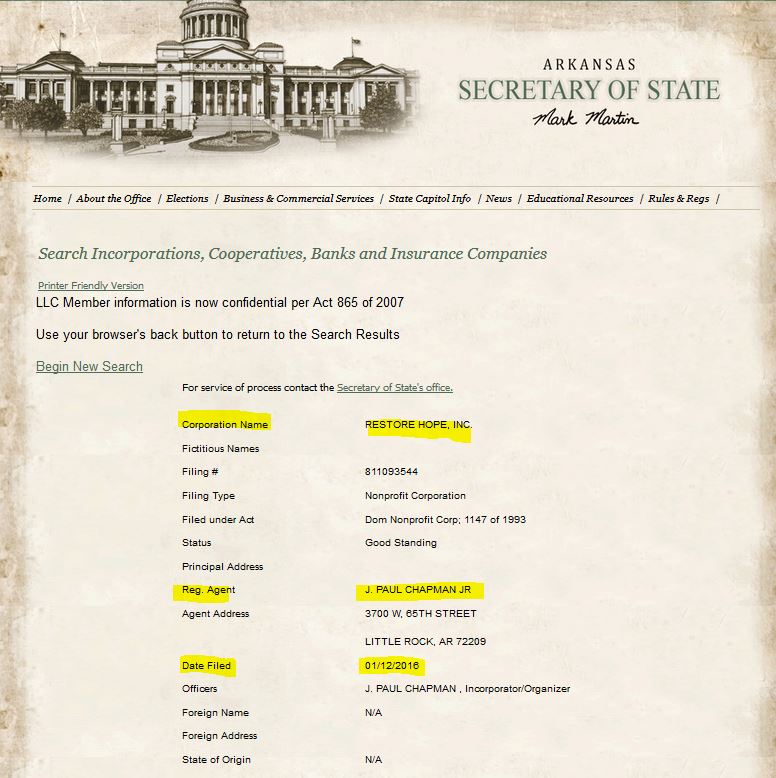 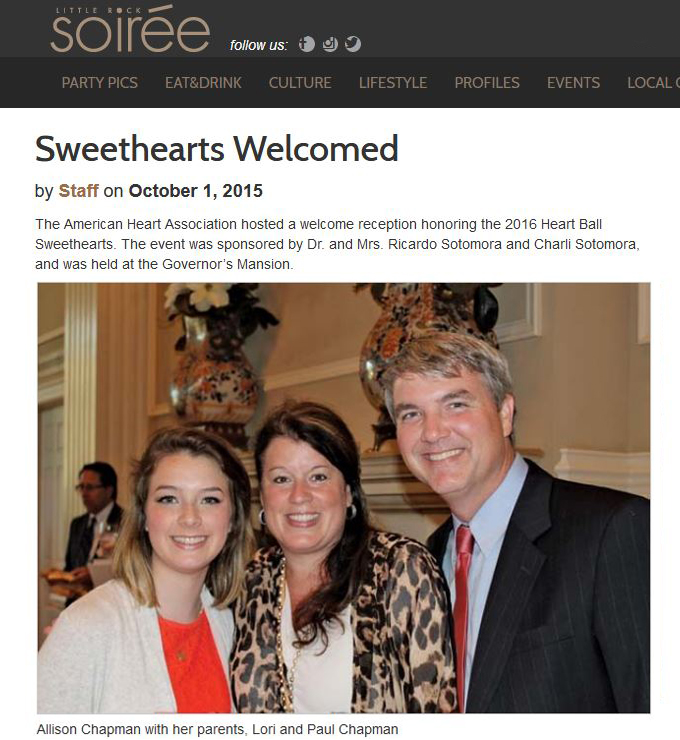 "(T)he nonprofit is in need of financial resources for personnel and operational expenses, and private donations are not yet adequate to meet its needs," Hutchinson wrote in his one-page proclamation.

In another proclamation also signed May 20, 2016, Hutchinson set aside $100,000 for the Morgan Nick Foundation of Arkansas to provide direct services to the families of missing children.

"Private donations have never been entirely sufficient to adequately sustain the operating costs of the Morgan Nick Foundation," the governor said in his proclamation.

Asked last week why he set aside the most money so far for the two groups, Hutchinson said, "They are both two statewide needs addressing foster care, prison re-entry and child safety.

"The use of discretionary funds does not require long-term financial obligations of the state," he said.

When asked how many emergency funding requests he's received, the governor responded: "Emergency and supplemental funding requests to my office are expressed as a general need, and the request is not directed to a specific funding source. When the need is determined to be valid, then we start looking for an appropriate discretionary fund that might work."

The Bureau of Legislative Research interprets state law to require that the Governor's Emergency Fund Committee review emergency and non-emergency uses of the fund, said Kevin Anderson, an assistant director of fiscal services for the bureau.

Arkansas Code Annotated 19-2-404 authorizes the governor to issue a proclamation declaring that an emergency exists "in the event of riots, threatened riots, sabotage, public insurrection, threatened insurrection, storm, flood, famine or other public calamity which jeopardizes the public peace, health, and safety of citizens of Arkansas that calls for immediate action." 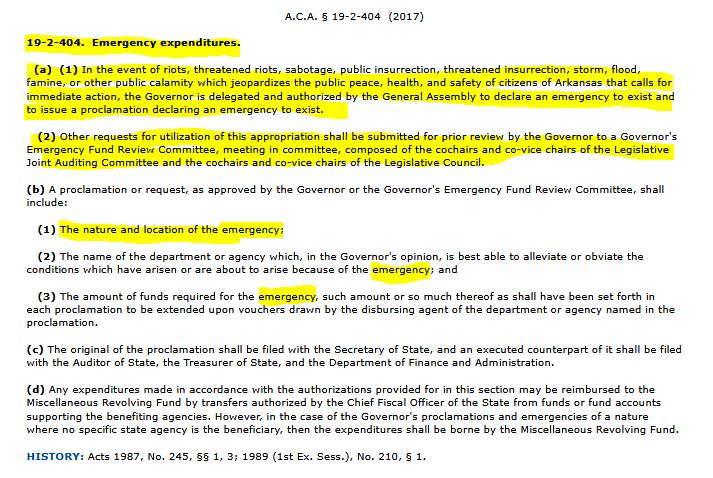 Other proposed uses of emergency money must go before the Governor's Emergency Fund Review Committee, whose members are the chairmen and vice chairmen of Legislative Joint Auditing Committee and Legislative Council.


Sen. Bill Sample, R-Hot Springs, said, "In the previous administrations, they were just letting us know they were using [the emergency fund]. But that is not what the law says, so we are going to be following the statute."

It's been rare for the committee to decline to review any governor's request to use emergency funds, according to Anderson.

During its 7-minute meeting last week, the committee declined to review Hutchinson's request to give $7,500 to the nonprofit Sonny Boy Blues Society for increased safety and security for the Arkansas King Biscuit Blues Festival at Helena-West Helena. Over the past 20 years, the society has received some emergency funds.

"This festival has grown into a popular attraction, drawing over 100,000 visitors, outstripping the resources of the Helena/West Helena Police Department and Phillips County Sheriff's Office as they try to provide adequate protection and security for the event," Hutchinson said in his proclamation.

But Rep. Richard Womack, R-Arkadelphia, pressed Hutchinson aide David Bell, "Why is this now an emergency? Who dropped the ball and is not prepared?"

In response, Bell said the governor provided the same amount of funding to the nonprofit last year.

But Sample said, "I just think this is a slippery slope that you are going down."