Mark Brooke, a probation officer for the city of Ward and pastor of Cornerstone Assembly in Ward, has been arrested on a charge of solicitation of prostitution after arrangements for sex were made with an undercover detective.

The Lonoke County sheriff’s office said in a statement that it began an undercover investigation after receiving complaints of possible unethical actions involving Brooke.

Brooke made “lewd and inappropriate comments” while talking with the undercover detective posing as a probationer.

Brooke later made arrangements for sex in exchange for money with the detective while using his city-provided cellphone.
Brooke was arrested around 2:30 p.m. January 18th by Lonoke County Sheriff John Staley and sheriff’s detectives.


Staley stated that it is never good when someone in a position of authority takes advantage of those in difficult situations; this is unacceptable and will not be tolerated.

The Arkansas Department of Community Correction made social media posts to proudly proclaim Brooke was not one of their employees. 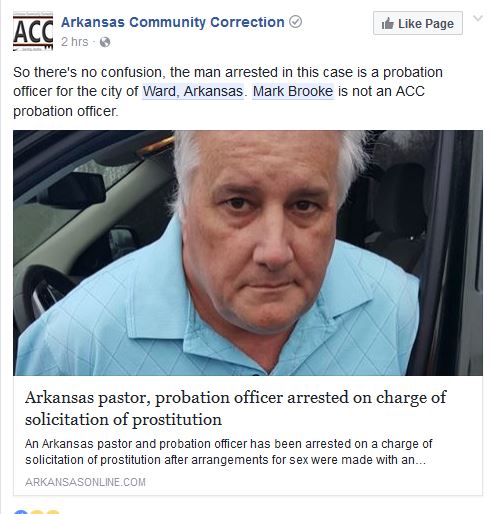 We previously posted about an ACC Probation Officer, Roderick Daniels, that was arrested and plead guilty to a felony charge.  Roderick the Felon is now employed by the failed Pulaski County Special School District at Robinson Middle School even though this blog proved to the PCSSD that he lied multiple times on his application for employment and hid his felony conviction.  You can read about that here.