Documents just obtained from the Northwest Arkansas Economic Development District ("NWAEDD") indicate that Jon Woods was the state senator that conspired with Micah Neal in a kickback scheme.

Neal, R-Springdale, plead guilty in federal court Wednesday to taking two kickbacks totaling $38,000. The money was a portion of grants he helped arrange from the General Improvement Fund ("GIF"). 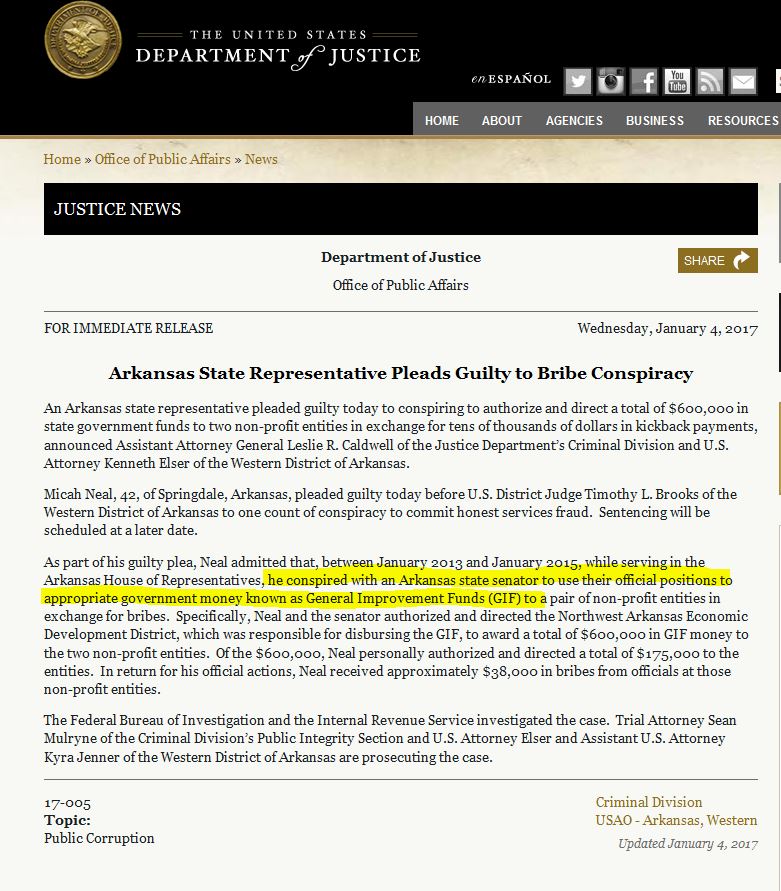 Filings in the federal case against Neal stated the he and an Arkansas State Senator, identified as  "Senator 'A'" obtained approximately $400,000 in grants from improvement funds or GIF from the NWAEDD that went to a entity the documents refer to as "Entity A".  CLICK TO VIEW NEAL'S PLEA AGREEMENT

Entity A is identified as "a nonprofit corporation" in Northwest Arkansas that "purportedly sought to create manufacturing jobs in northwest Arkansas, specifically for a specialized workforce including disabled veterans, disadvantaged youth and individuals recovering from substance abuse."

It did not receive the general improvement money directly, but an associated health care provider identified only as "Entity A-1" received the $400,000 on "Entity A's" behalf, records say.

Entity A is Decision Point which was an Affiliate of Alternate Opportunities ("AO") back in 2013.

Entity A-1 is described in the court documents as "a health care provider with facilities in the Western District of Arkansas and elsewhere." The western district refers to federal court jurisdiction.

From the documents we obtained, we have identified Entity A-1 as AmeriWorks. A total of $400,000 was disbursed from NWAEDD. 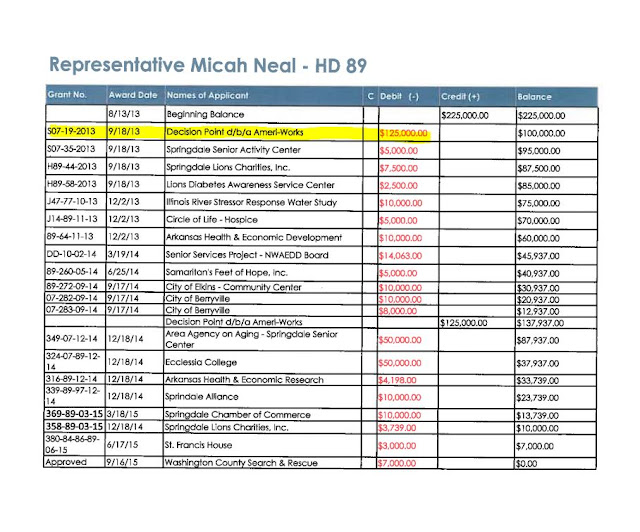 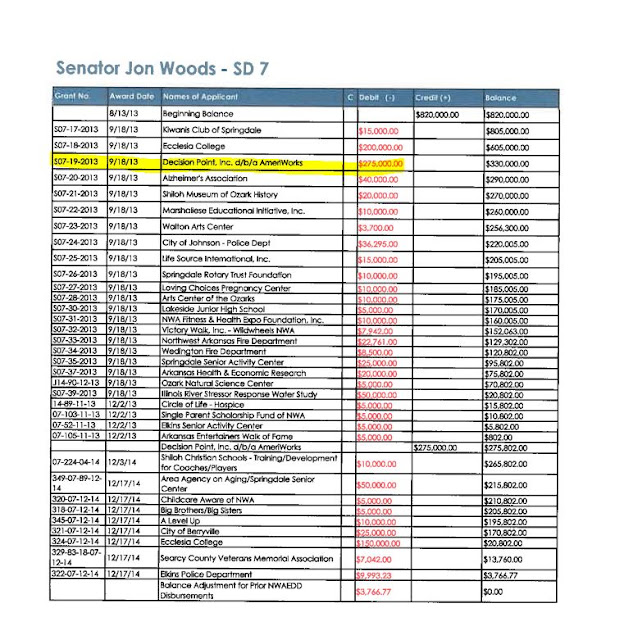 Entity A-1 or  AmeriWorks, is an apparent shell company incorporated by Milton Russell "Rusty" Cranford. Cranford is listed in the court filings as "Person A". 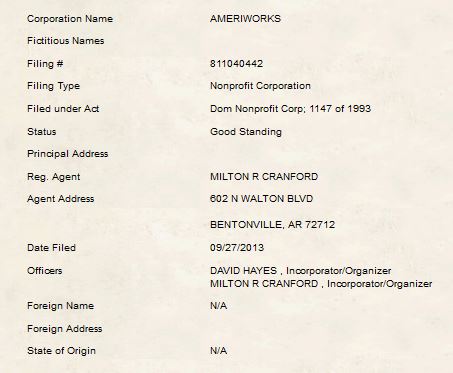 Cranford was an employee of Dayspring Behavioral Health Services when it was acquired by Alternative Opportunities in 2007.

Alternative Opportunities merged with Decision Point in 2011 and Health Resources of Arkansas ("HRA") in 2014. HRA is a part of Preferred Family Healthcare ("PFH").

An article posted on  HarrisonDaily.com in December 2014 states that Cranford was the CEO of AO. 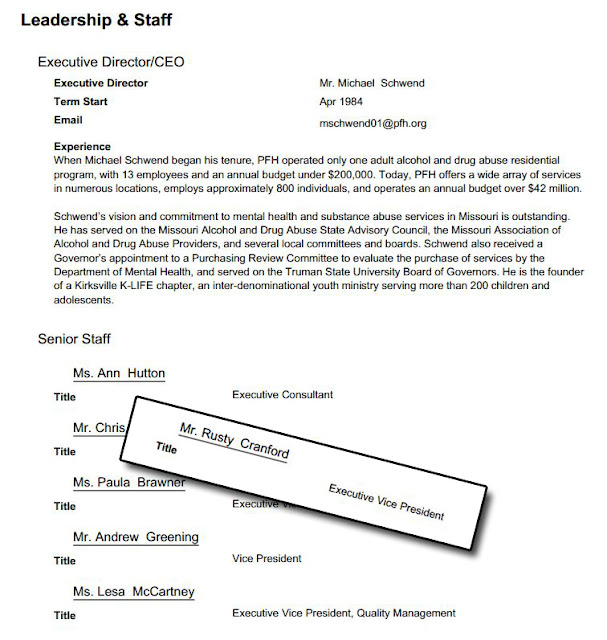 Cranford was also a registered lobbyist in 2013. 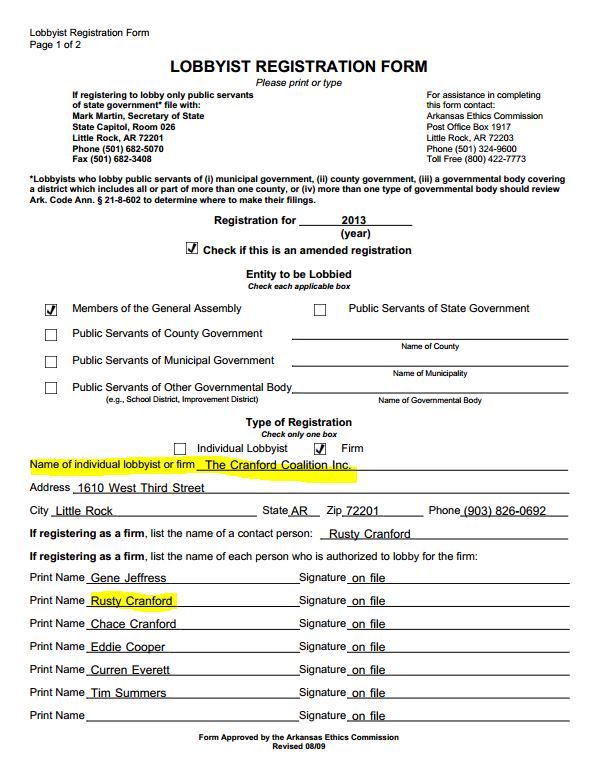 Cranford remains associated with lobbying activities to this day. 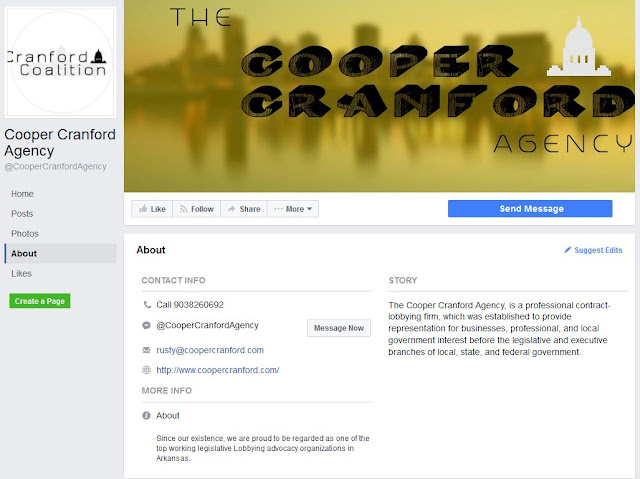 Neal's plea agreement describes Person A as the incorporator, registered agent and director of "Entity A," a nonprofit in the Western District of Arkansas "that purportedly sought to create manufacturing jobs in northwest Arkansas, specifically for a specialized workforce including disabled veterans, disadvantaged youth, and individuals recovering from substance abuse."

Person A is also a "high-ranking executive" of "Entity A-1," which is a health care provider that has facilities in the Western District of Arkansas "and elsewhere."

And Person A is a "licensed lobbyist in the State of Arkansas."

The plea agreement states that once the checks totalling $400,000 cleared the bank, Senator A/Woods handed over $20,000 in cash to Neal on behalf of Person A/Cranford.

If you paid close attention to the two photos of the NWAEDD spreadsheets you noticed that the funds disbursed to Entity A were credited back (125k between 9/17/14 and 275K on 12/2/14).

This is the explanation about the return of funds was obtained from PFH. 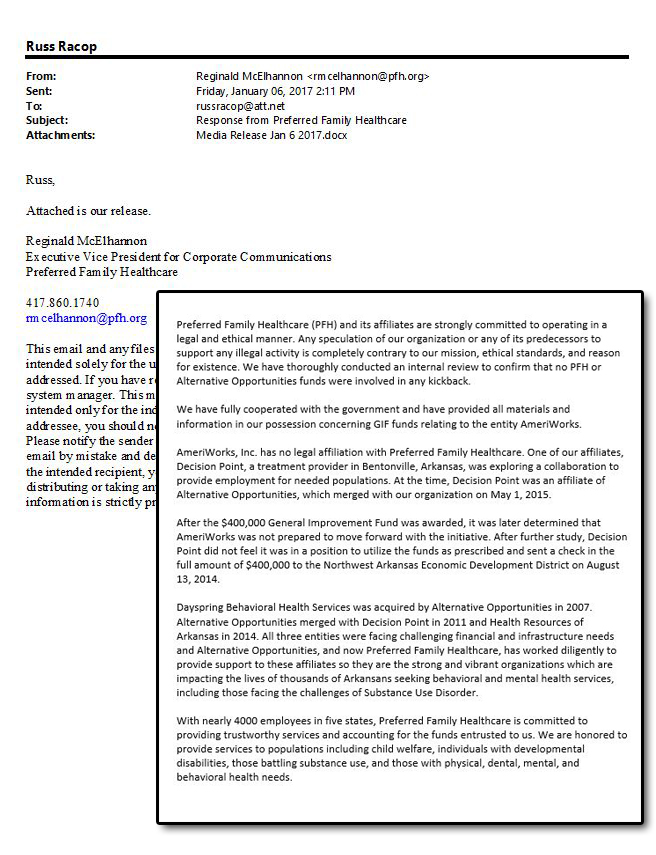 This is what PFH told Arkansas Business: "AmeriWorks, Inc. has no legal affiliation with Preferred Family Healthcare. One of our affiliates, Decision Point, a treatment provider in Bentonville, Arkansas, was exploring a collaboration to provide employment for needed populations. At the time, Decision Point was an affiliate of Alternative Opportunities, which merged with our organization on May 1, 2015.

"After the $400,000 General Improvement Fund was awarded, it was later determined that AmeriWorks was not prepared to move forward with the initiative. After further study, Decision Point did not feel it was in a position to utilize the funds as prescribed and sent a check in the full amount of $400,000 to the Northwest Arkansas Economic Development District on August 13, 2014.

"Rusty Cranford was an employee of Dayspring Behavioral Health Services when it was acquired by Alternative Opportunities in 2007. Alternative Opportunities merged with Decision Point in 2011 and Health Resources of Arkansas in 2014. All three entities were facing challenging financial and infrastructure needs and Alternative Opportunities, and now Preferred Family Healthcare, has worked diligently to provide support to these affiliates so they are the strong and vibrant organizations which are impacting the lives of thousands of Arkansans seeking behavioral and mental health services, including those facing the challenges of Substance Use Disorder."


Oh, the shenanigans!  PFH all but says AmeriWorks was a shell company only established to launder money.

The plea agreement details the movement of the funds from Entity A1/Decision Point to Entity A/AmeriWorks, but does not mention the return of funds from AmeriWorks (Cranford) to Decision Point/PFA.

Did PFA pony up the $400,000 itself to protect exposure as a result of the questionable actions of one of it officers?

Just because the funds were repaid that doesn't mean that a bribe was not made.  There is more to this story than we are being told.

Neal's plea agreement also referrers to an Entity B, which is described as "a non-profit corporation operating a college in Springdale, Arkansas".

Entity B is Ecclesia College. The documents from NWAEDD shows funds authorized by Neal and Woods in 2013 and 2014 totaled $400,000. That amount matches the amount listed in the plea agreement (see page 4 and 5 of the plea agreement - link was posted above).

There is not much to Ecclesia College. 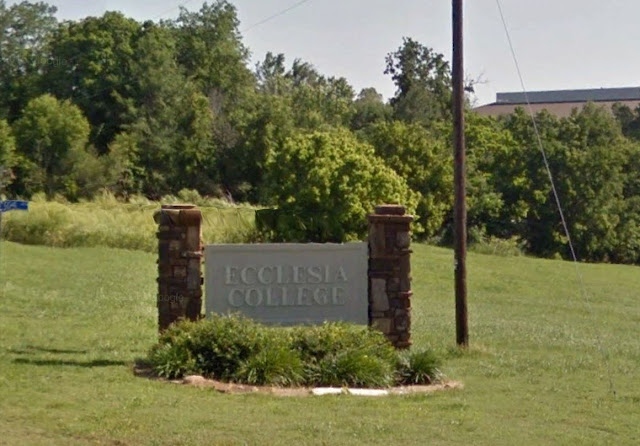 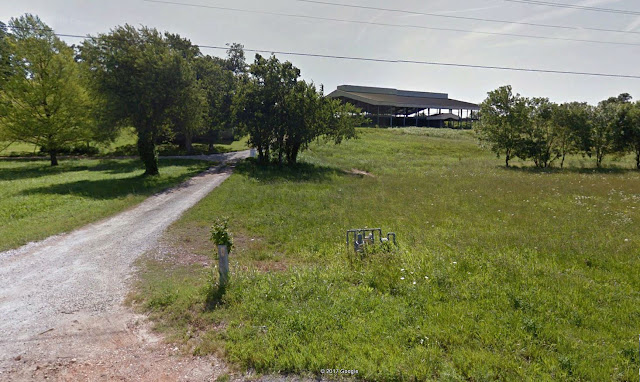 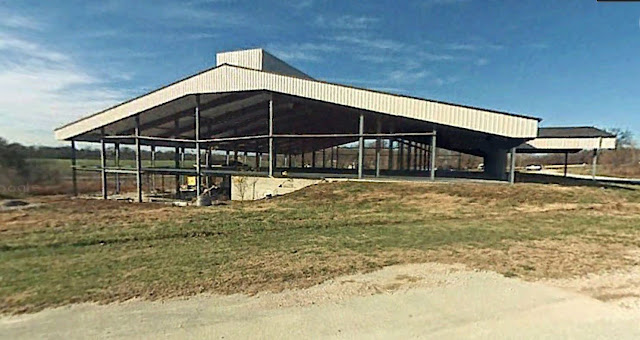 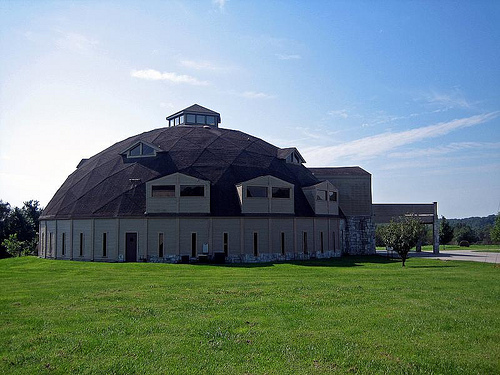 The plea agreement referrers to a Person B who is described as president of Entity B and a friend of Senator A/Woods.

Person B is Oren Paris III, the president of Ecclesia College.

Neal's plea agreement states that Senator A/Woods told Neal that he would get $20,000 for authorizing funds to Entity B/Eccessia College from Person B/Paris.

The agreement states that after the two check totaling $250,000 to Entity B/Ecclessia College cleared the bank in December 2014 a check in the amount of $65,000 was issued to Person C's company.  Over the following three days, Person C made three cash withdrawals per day totaling $53, 700 (which no doubt resulted in that bank filing a Suspicious Activity Report or SAR with federal authorities).

Senator A/Woods contacted Neal and told him that Person C would be bringing $18,000 in cash for authorizing the funds to Entity B/Ecclessia College.

Person C was described as "the incorporator and sole member of a limited liability corporation incorporated in the State of Arkansas that purportedly provides consulting services" and "a friend of Senator A and Person B."


We are attempting to discover the identity of Person C and will post that information as a update. 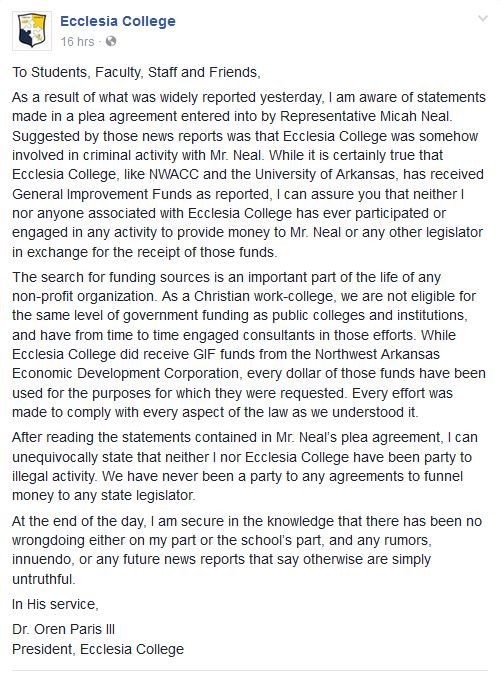 Not to be left out of making public comments, Joe Willis, Executive Director of NWAEDD,  feeling the heat for stalling on responding to FOI requests issued a statement:

Charges against Woods, Person C and others have not been filed, and that could change just as quickly as the weather can here in Arkansas.

Perhaps Woods is trying to work a deal with the DOJ and is ratting out others. 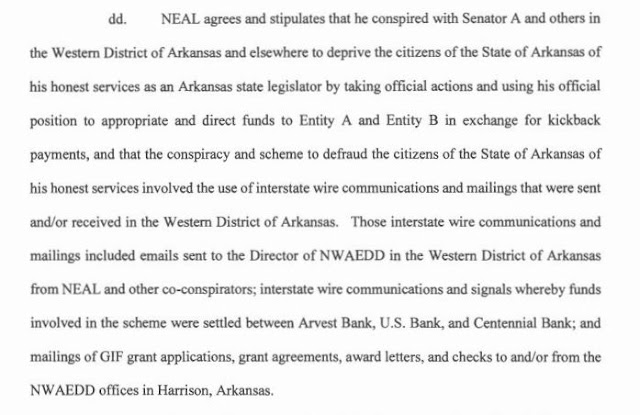 We suspect that there will be additional individual indicted and charged.

Sources close to the investigation have told us that many Arkansas legislators have given statements about similar happenings.