Back on September 18th we posted a story about Monticello Mayor Zack Tucker.  Tucker had been arrested and charged with  tampering with a public record (Class D Felony) and abuse of office (Class B misdemeanor).  You can read our previous post here.

In a Drew County Circuit Court filing Tuesday, Tucker's attorney, Hani Hashem of Monticello, wrote that Tucker had "engaged in significant negotiations regarding a plea agreement."

Hashem wrote that Tucker has agreed to enter a guilty plea and will pay immediate restitution. The former mayor told Circuit Judge Bynum Gibson that he had secured more than 50 percent of the amount required for restitution and that a family member had agreed to cosign a loan for the remaining amount.

Tucker said the paperwork securing the loan was submitted to a bank, which would determine if it would lend funds based upon the family member's signature. If the bank denies the loan application, Hashem wrote, Tucker has agreed to make monthly payments in restitution. So much for the immediate restitution.

Hashem said later Tuesday that he would not allow his client to speak to the news media while the case was ongoing. 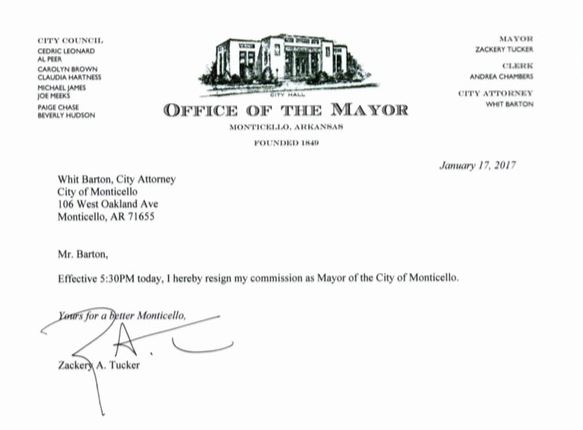 At the root of the case was an April 3, 2015 check for $22,500 from the City of Monticello Advertising & Promotion Commission Fund that was made payable to the Economic Development Fund of Monticello ("EDFM"). The check bears Tucker’s signature and was endorsed on the reverse side by Tucker. 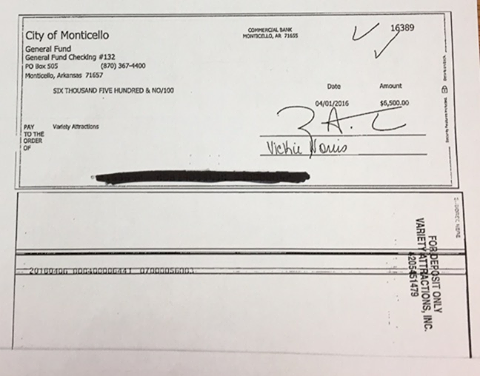 Also, an invoice was submitted to the City of Monticello for $22,500 purportedly for half of the cost of engineering fees for a proposed convention center. The invoice appears to have been submitted to the city by the EDFM. However, the EDFM did not approve, issue or authorize the invoice, according to the EDFM.

The money went to an entertainment company to pay for the cost of entertainment at the local forestry festival. Neither the city council nor the A&P Commission authorized the expenditure.

When the plea deal is filed we will post an update.