Carroll County District Judge Timothy Parker resigned on the last day of his term and agreed to never be a judge again. Parker's negotiated exit from the bench followed an ethics investigation directed by the Arkansas Judicial Discipline and Disability Commission.

The commission says Parker admitted he gave improper favors to defendants in his court that he knew. The commission also said it has videotaped statements from more than a dozen women who said they got preferential treatment in return for sexual favors. Parker denied their allegations.

The Commission said Parker was a district judge since 2013 when he was appointed to a term that ended on Dec. 31, 2016. He previously was an elected Eureka Springs Municipal Court judge from 1999 - 2004.

Investigators say Parker went to the Carroll County jail in June 2013 and conducted a "post-arrest probable cause (PC) determination" for a friend and then released the woman without requiring a bail. They said the judge then gave the woman a ride to her home in his car. The commission said both acts were a violation of a judge's judicial ethics pledge since the woman was the judge's friend.

The commission also says Parker "over the course of several years . . . performed probable cause determinations, lowered bail settings and released defendants on their own recognizance (and) . . . received ex parte (one-on-one) calls from the jail from defendants and discussed their cases . . . to the benefit of many defendants who were either friends . . . or former clients." The commission said Parker should have recused himself or disclosed his relationships with those defendants to prosecutors and defense attorneys.

The judicial commission said Parker, if he had not resigned and agreed to no longer be eligible for judicial office, would have faced "a formal statement of charges . . . for violations of the Code of Judicial Conduct." Since Parker resigned, the ethics charges won't be filed or contested, which Parker told the commission he would have done.

In the category of disputed allegations, investigators said Parker would set bonds, or release women without bonds "in exchange for sexual favors. . . . Allegations also exist about trading cash and certain prescription pills for sexual favors or money with many of the same women, as well as other women in the community," according to a letter from the commission to Parker. "The JDDC possesses video statements from over a dozen women, as well as recordings of conversations women in the jail had with you in your role as District Court Judge. Print outs of text messages from your cell phone and from the phones of female litigants with cases in District Court also support these allegations. Our investigation led to docket sheets and other records that corroborate the allegations."

The letter says Parker denied these allegations "and dispute all of them." It says Parker's decision to resign and not fight the allegations "was influenced by the effect litigation would have on your family, the time and expense of litigation and that your term on the bench was to expire on December 31, 2016. You resigned with a declaration of permanent ineligibility to serve in the judiciary before the case progressed to that point."

Parker admitted no wrongdoing in his negotiated resignation.

A new Carroll County district judge took office on Jan. 1, so Parker's resignation creates no vacancy.
When Parker was appointed in 2013 by then Governor Mike Beebe to replace Judge Marianne McBeth who resigned, he made these comments:

"We are in hard economic time -- it is hard for people to pay on fines and costs," he said. "I want to use community service as a way for them to pay. First, I have got to have someone to supervise the community service, and I will have to check the budget for it."

"I am a small man with a small ego," he said. "There is no room for ego on the bench. I plan to be a humble judge that follows the law. It's justice with compassion." 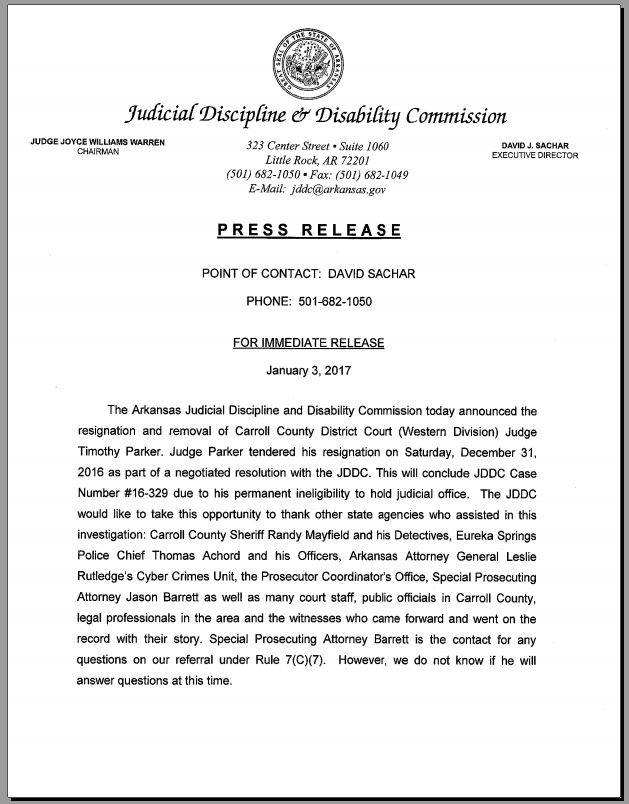 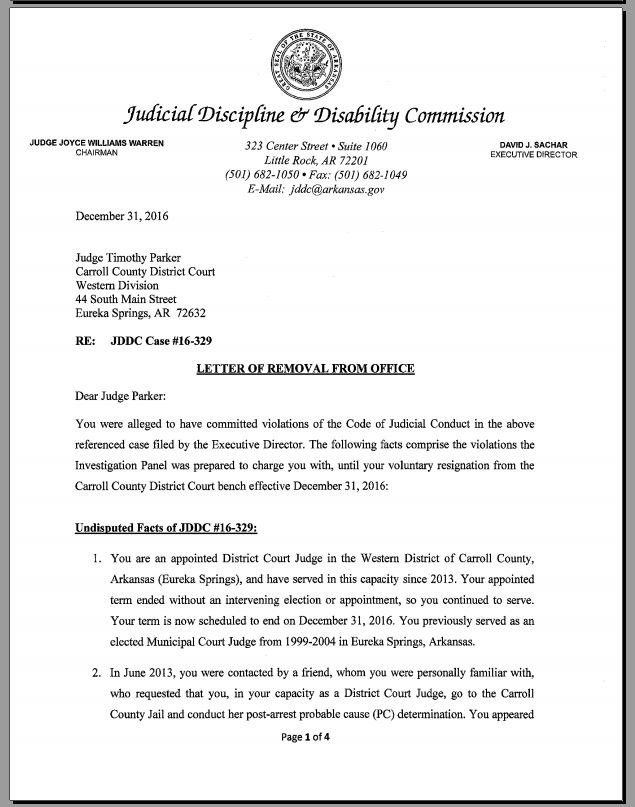 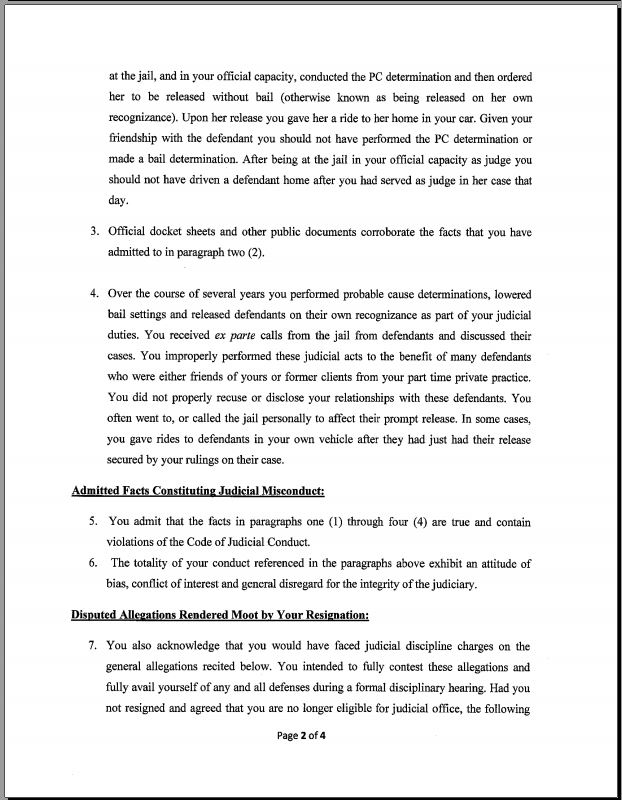 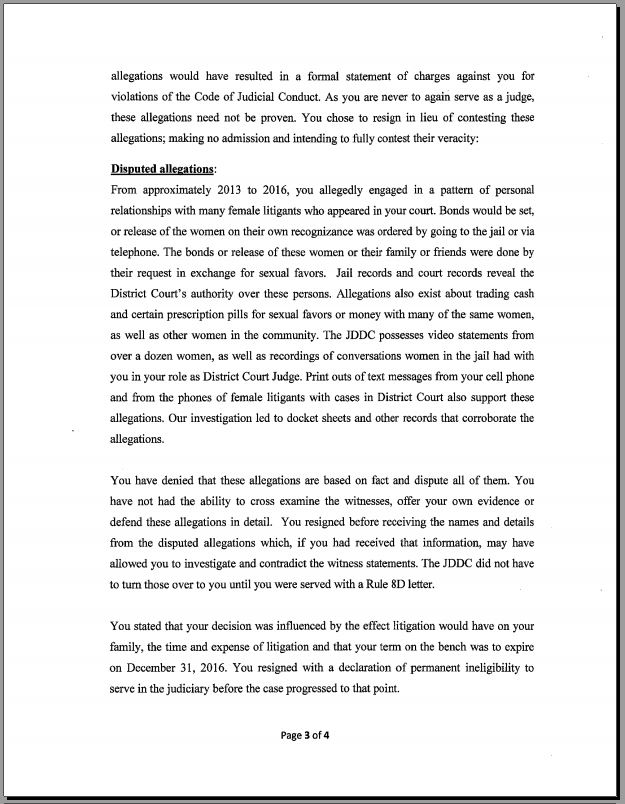 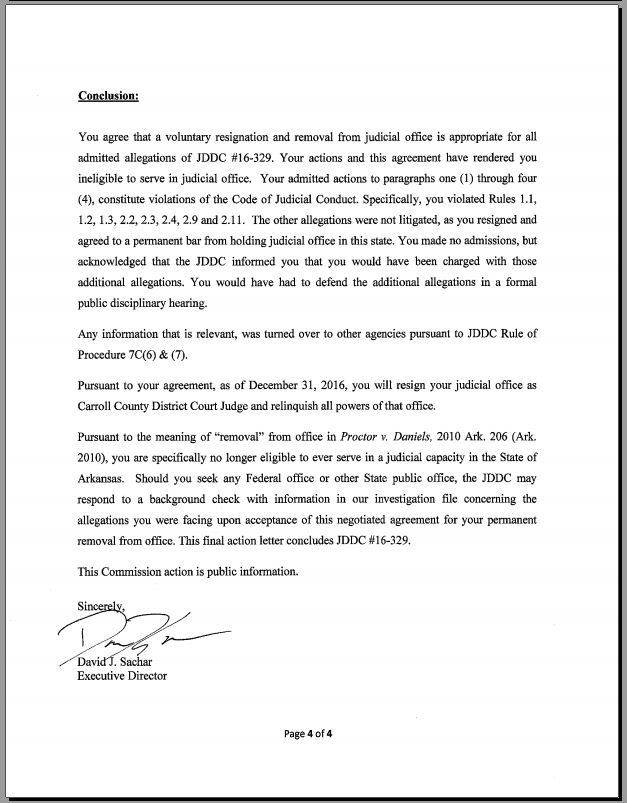 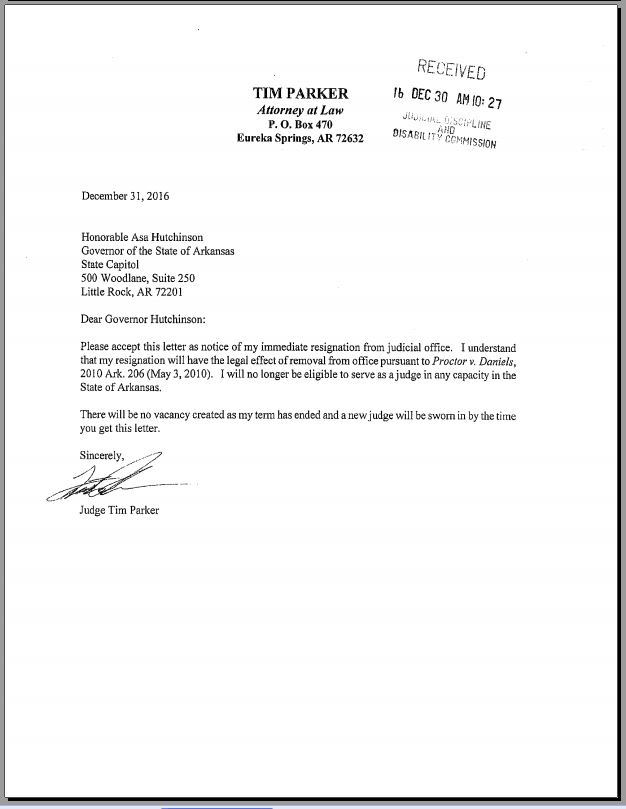