WHY DO PROSECUTING ATTORNEYS HAVE PROBLEMS COMPLYING WITH THE ARKANSAS FREEDOM OF INFORMATION ACT?

Last May we posted a story about Cody Hiland, the Prosecuting Attorney for the 20th Judicial District, and his flagrant violation of the Arkansas Freedom of Information Act.  In Hiland's case, he had something to hide.

Now can add David Ethredge, the Prosecuting Attorney for the 14th Judicial District to the list of violators.

Back on December 16, 2016, we called the office of the Boone County Prosecuting Attorney to find out the email address of the individual that would handle a FOI request.  We spoke to a friendly lady named Mary who told use to send our FOI request to wes@14thpa.com, the email address for Wes Bradford, a deputy prosecuting attorney.

Here is our call.


Here is the request we sent. 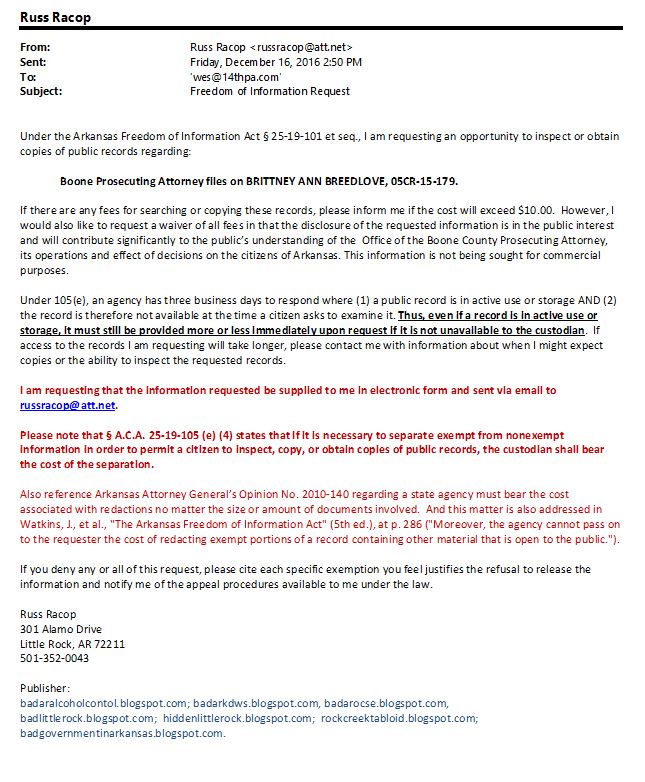 We then received a caustic email from Ethredge. 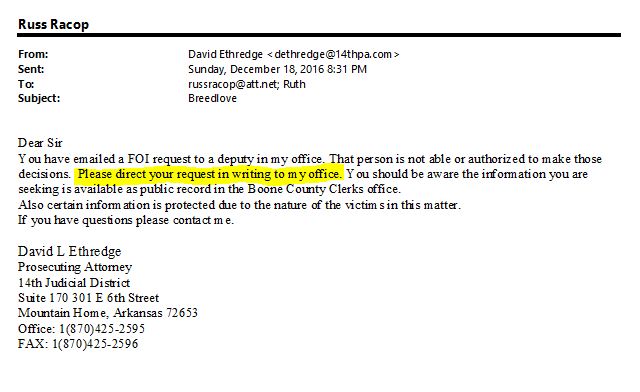 Apparently Ethredge is not aware that a verbal FOI request is permitted under the Arkansas Freedom of Information Act.  It is also apparent that he did not carefully read our request.  We did not ask him for filings made with the Boone County Circuit Clerk, we asked him for his files.  Granted, his file might have included filings made with the Circuit Clerk, but we know from experience that a prosecutor's file has quite a bit of information in it besides pleadings and motions.

Besides, he already had a request in writing sent to his deputy.

If his deputy was not the individual that was responsible for FOI requests, the Arkansas Freedom of Information Act requires him (the deputy) to advise us that he is not the "custodian" of the record.

That did not occur either. 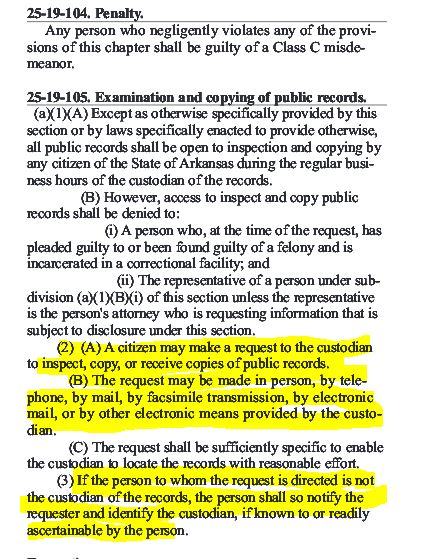 Why would Ethredge not want to follow the law?

You would have to ask him.  Maybe, like Hiland, he has something to hide.

Surely this is not the first FOI request he has ever had to deal with and he is not ignorant of the law.

Not to be uncooperative, we resubmitted our request a second time, this time to Ethredge's email address. 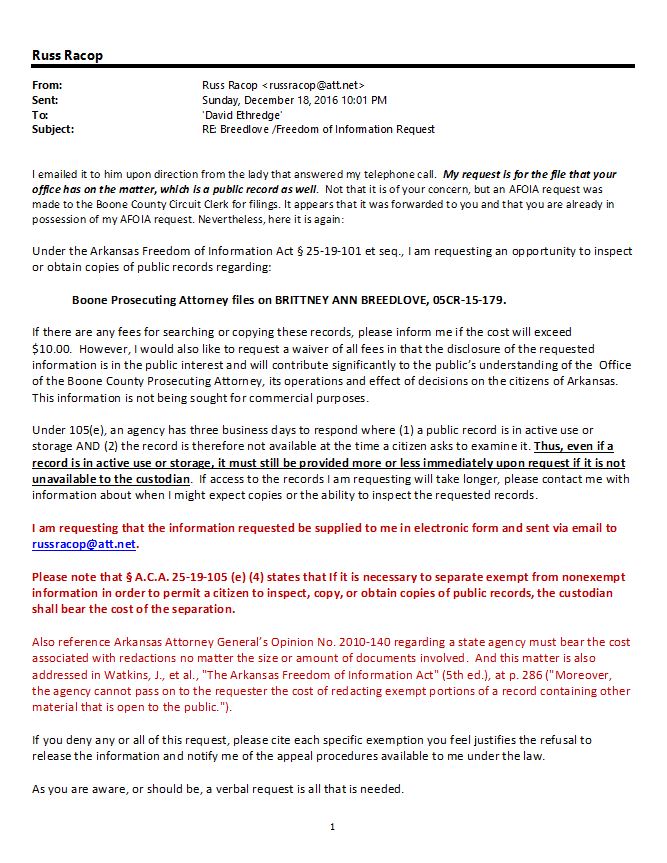 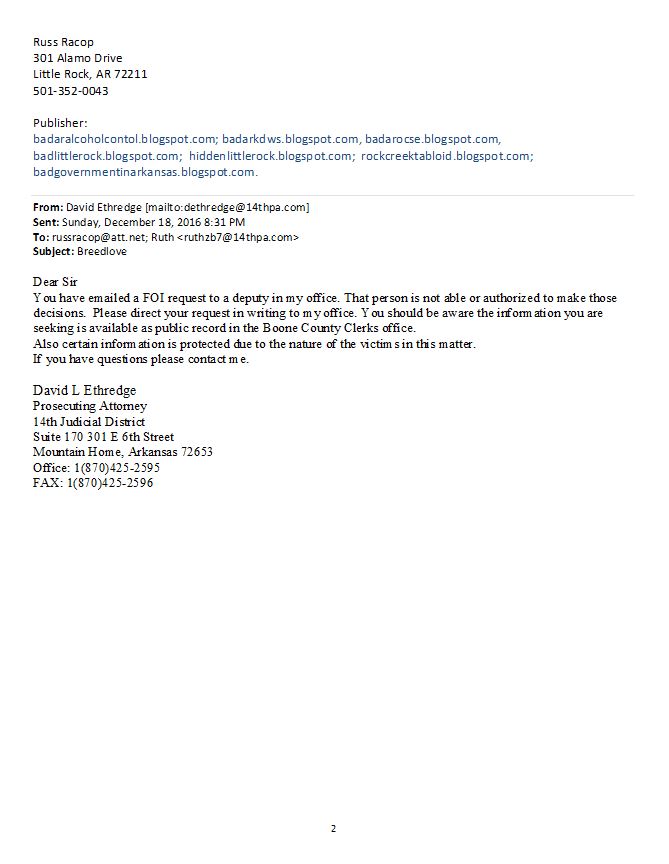 The next response we received was from the individual that Ethredge told us was not authorized to provide information to us. 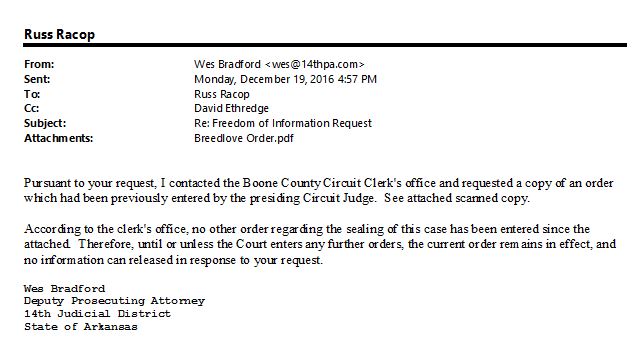 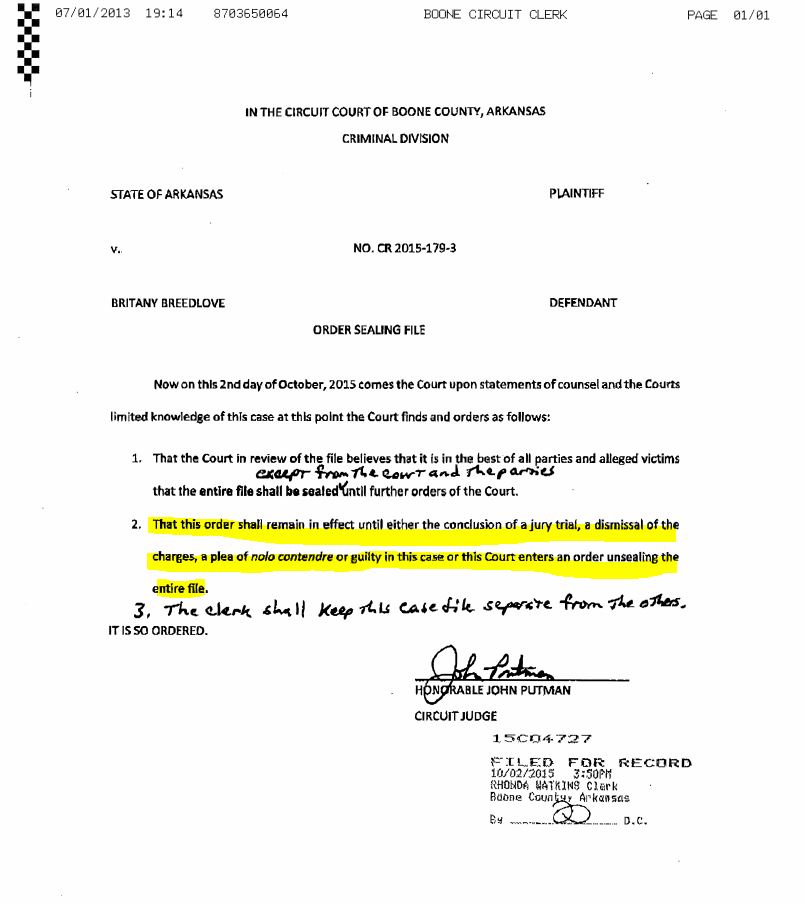 Apparently reading comprehension is not a prerequisite for election or employment in the Boone County/14th Judicial District. Office of the Prosecuting Attorney.

The order clearly states that the file (court file) shall remain sealed until the conclusion of a jury trial, a dismissal of the charges, a plea of nolo contendre or guilty...OR this court enters an unsealing of the entire file (implied meaning being the file could be unsealed by the court prior to the other conditions being met).

Breedlove made a plea deal with Ethredge to avoid having to do additional time for rape. 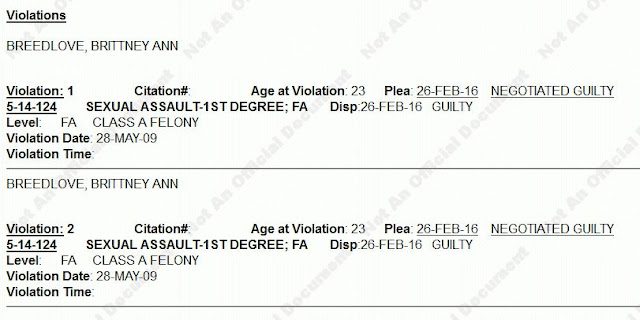 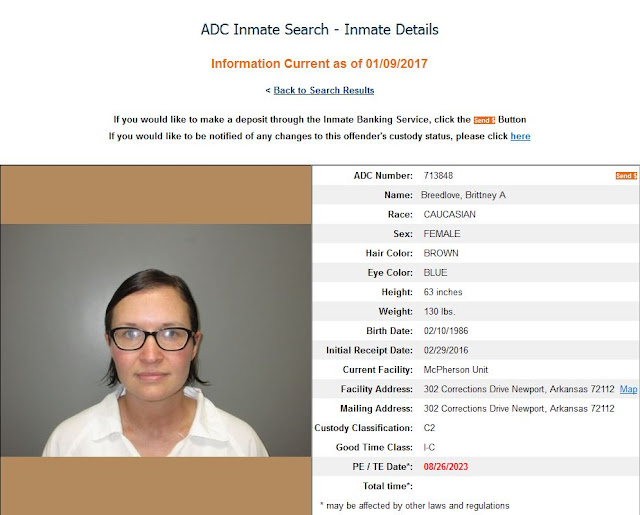 So the conditions listed in the order for the file to be unsealed have been satisfied.

But the order did not cover the files maintained by the Prosecutor.  This is what we requested from him.

If his file contained court filings, those might be considered as an exemption to our request.  No ignorant individuals here at the Bad Government in Arkansas blog.

So we sent responses to the email received from Ethredge's deputy.

After countering their bogus arguments, they sent this email:

Since they stated they would comply with our legal FOI request, we have been waiting 19 days.

No motions or any other filings have been recorded in the closed Breedlove case.

And our FOI request to the Boone County Circuit Clerk for a copy of filings?  Not even an acknowledgement that we sent a FOI request.


So, we are in the process of filing an AFOIA Complaint (Appeal of Denial of Rights) against the Prosecuting Attorney and the Circuit Clerk.

We have some experience is this (three court battles - and we got the requested documents as a result each time) and are certain we will get them in this matter as well.

Our first FOI legal battle. And the results.