As covered in a previous post, former probation officer Roderick Daniels used his position as a probation officer with the Arkansas Department of Community Correction ("ACC") in a scheme to make money from a minor that was on probation for a terroristic threatening charge. In return for funds from the minor on probation, Daniels would provide information about drug test dates so that the minor could pass.  The minor, only identified in court documents as "S.N.", had tested positive on a drug test and before his next test Daniels called him and asked if he could pass a drug test.  S.N. told Daniels he couldn't, and Daniels told him that he could give him time to get the drugs out of his system for $250.

Daniels assisted S.N. to avoid testing positive on drug tests by re-scheduling tests a number of times and collected $250 each time.  Using non-proscribed drugs or alcohol is prohibited while on probation is a violation of your terms of probation and can result in the original sentence being imposed resulting in jail or prison.

Daniels attorney, Dale Adams, sought leniency for his admittedly guilty client, telling U.S. District Judge Denzil Price Marshall, Jr. in a Sentencing Memorandum filed on November 8th that his client had, "strong family ties and support. Since being arrested and charged in the case  he has held steady employment...". 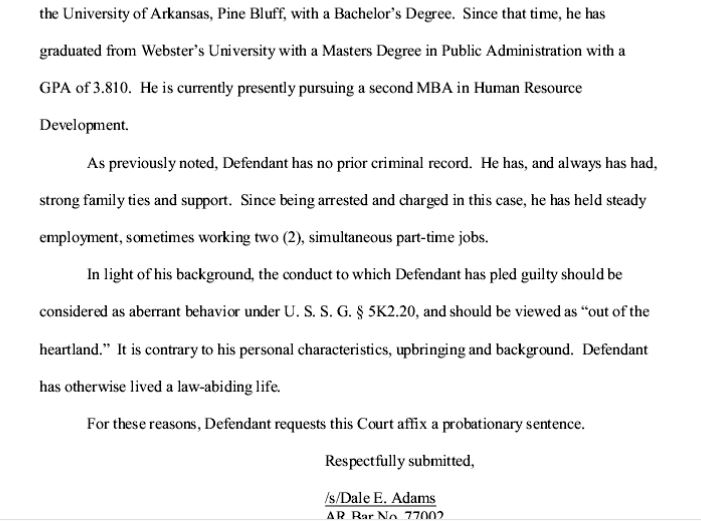 What Adams failed to disclose was that Daniels infamous family, namely his mother Carla Daniels and his brother Rashaad Daniels have their own problems to deal with as we have pointed out in previous posts.

Both Carla and Rashaad resigned from employment with the Arkansas Military Department during internal investigations.

Roderick Daniels was hired by the Pulaski County Special School District ("PCSSD") in August 2016, but he failed to advise them that he had plead guilty to a felony in April 2016 and was waiting to be sentenced.

In fact his application for employment with the PCSSD had some false and misleading information as to why he was no longer employed as a probation officer with the Arkansas Department of Community Correction. 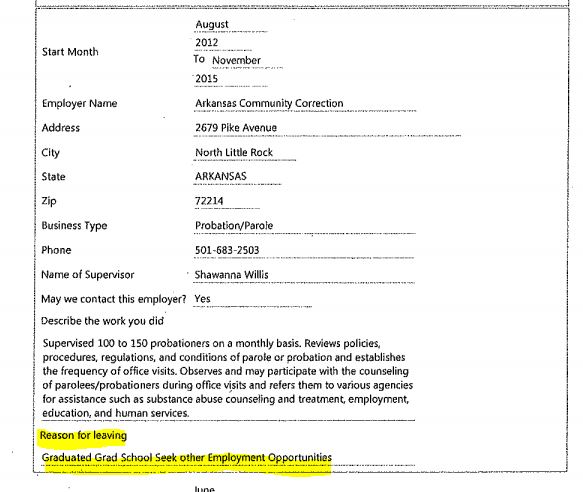 Roderick Daniels was arrested by the FBI on November 6, 2015 (a Friday) and was held in the Pulaski County Jail until he could be arraigned in Federal Court on November 9, 2015 (a Monday). 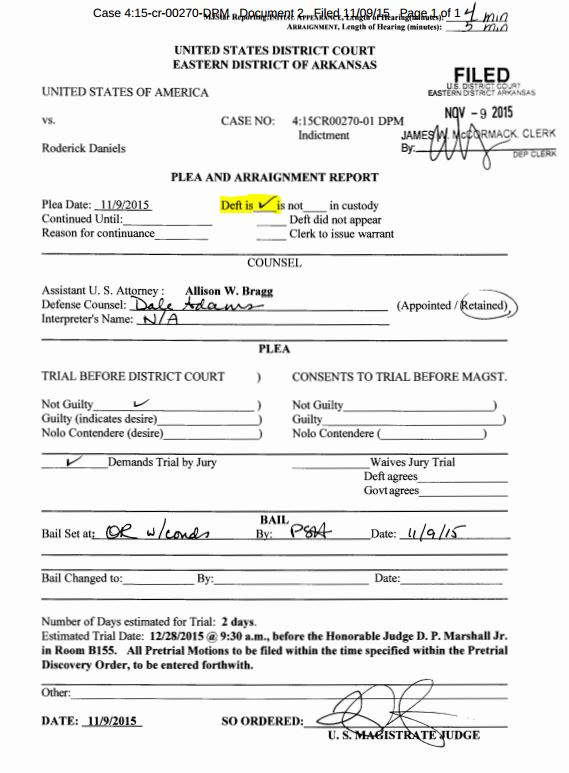 Sometime over the weekend, a resignation letter for Roderick mysteriously appeared on the desk of ACC Area Manager Darnell Williams. 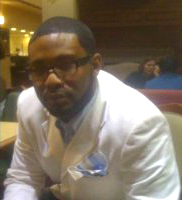 As Roderick was being held in jail, how did Williams find it on his desk on  the following Monday morning?  According to Dina Tyler with ACC, Williams was at this office on Friday November 6th and Saturday November 7th and he found Roderick's resignation notice on his desk when he arrived at work on the morning of November 9th. 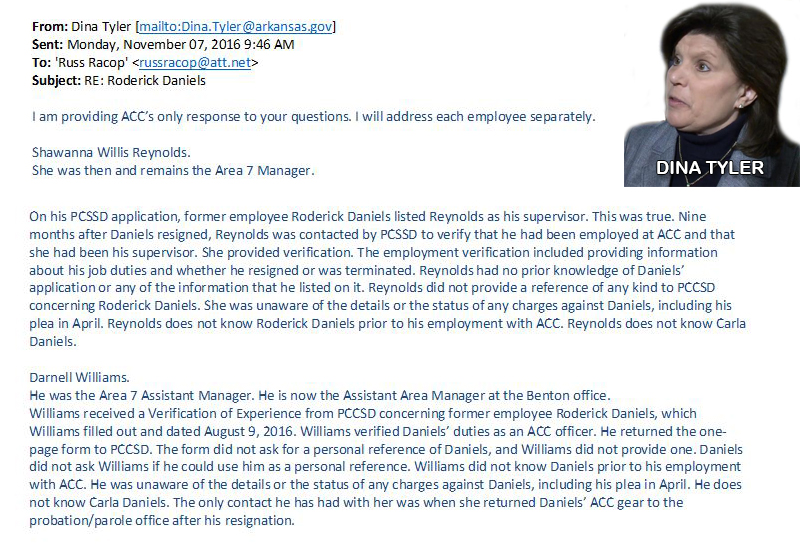 Based on information and belief, Roderick's mother, Carla, used his keys to gain access to the ACC building and Williams office and she placed a resignation notice on Williams desk.

Roderick wanted to resign before ACC terminated him for cause.

Roderick listed Williams as a personal reference on his application for employemt with PCSSD. 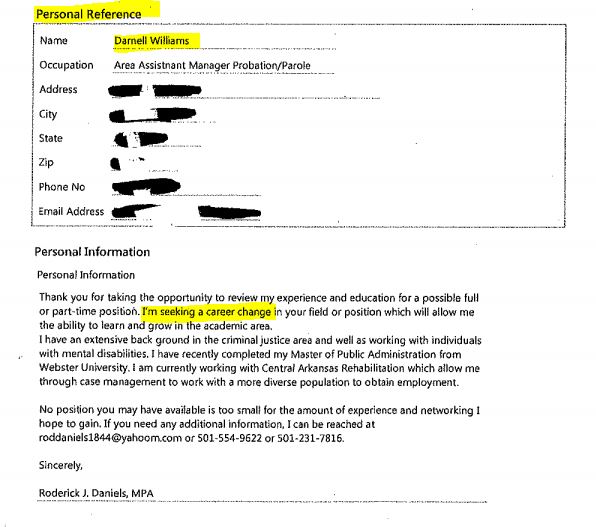 On his application for employment with PCSSD, Roderick states that he left his position as a Probation Officer with ACC in November 2015 due to his graduation from graduate school and seeking other employment opportunities.

Roderick stated on his application with PCSSD that, "I'm seeking a career change". He has to seek a career change because his felony conviction killed his law enforcement career.

Roderick received a graduate degree in May 2016 some six months after his arrest and resignation.

How do we know this? From his application form to PCSSD. 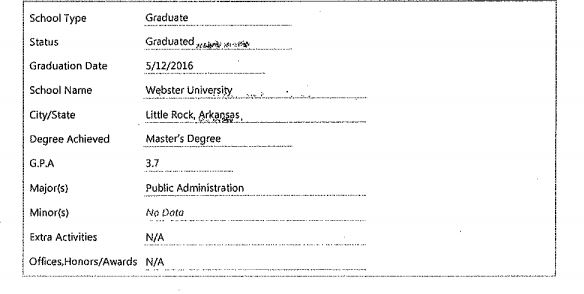 An individual that manipulated a minor under his control (probation officer/probationer) to extort funds has no business being employed in any fashion at any school.

Assistant U.S. Attorney Allison Bragg did not respond to our efforts to contact her prior to Daniels Sentencing Hearing nor has she responded to our request for comments on the Daniels case.

The Arkansas Democrat-Gazette in their coverage of this matter seemed to be fixated about a sign that is posted in each probation office that warns probationers to not pay fees or restitution to any probation officer or staff member. 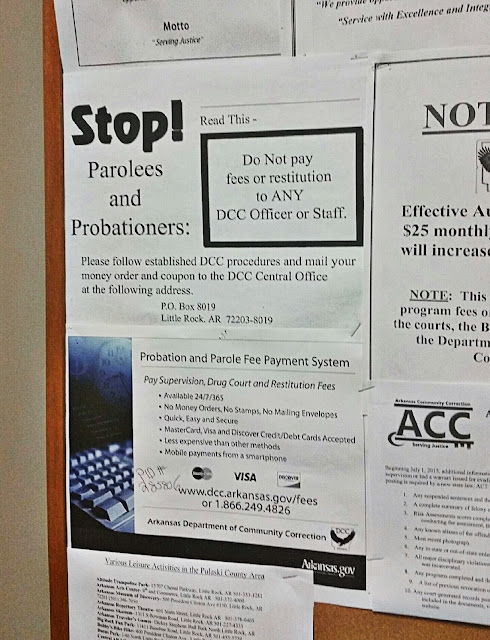 Apparently the ARDEMGAZ reporters failed to understand that Roderick was not collecting a fee or restitution from the probationer, he was collecting a pay-off. Hence the felony conviction.

The Arkansas Department of Community Correction had an interesting tweet in response to today's Arkansas Democrat-Gazette story. 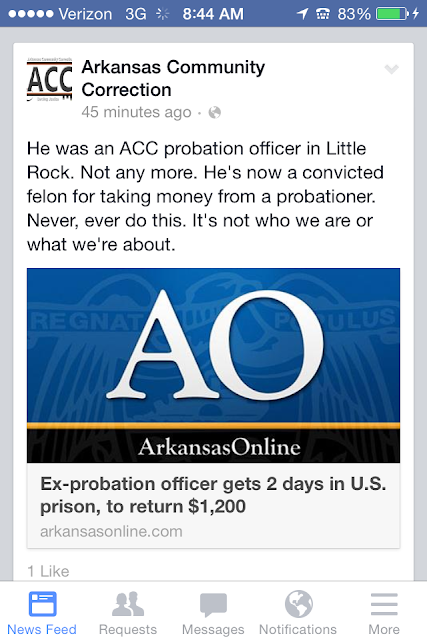 It is hard to believe that the ACC was not made aware of the FBI investigation and the arrest and felony charges of their own employee. Was S.N. the only probationer to be victimized by Roderick Daniels?  Probably not.

When you have a certified police officer (his was a specialized certification as a probation/parole officer only) and they are found guilty (in this case he actually entered a plea agreement) of a serious offense involving the fulfillment of their duties as an officer, a mere slap on the wrist is not justice.

Stay tuned for updates and additional stories on the infamous Daniels family.