The general manager of Saline County Water Works, Robert McKeon,  was arrested at his job on Thursday for allegedly harassing an Alexander city alderwoman for over a year. 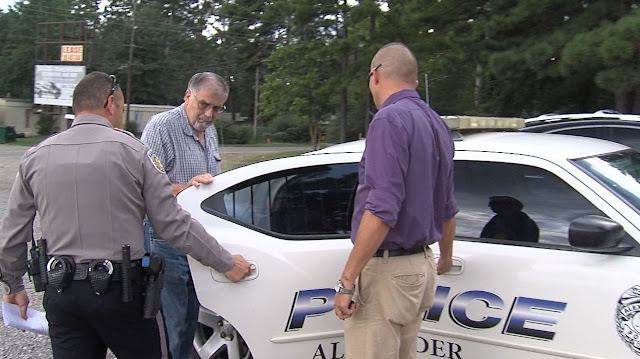 McKeon, 72 of Alexander, was arrested about 2:15 p.m. by officers with the Alexander Police Department. McKeon was taken into custody without incident, remaining uncuffed and requesting the use of his cane, as he was placed in the back of a police cruiser. 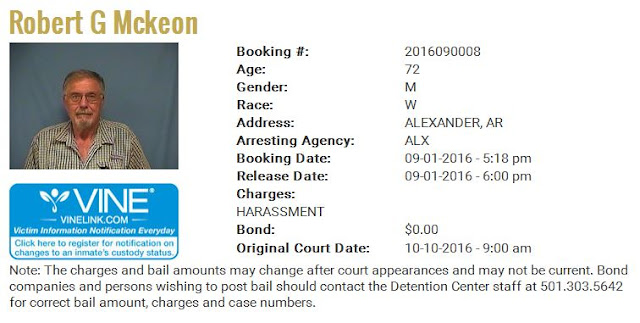 According to an Alexander Police Department incident report filed on Wednesday, Alexander alderwoman Melissa Ratliff, 29,  went into the Dollar General to get a drink when she saw McKeon checking out at the register.

McKeon had called out Ratliff’s name to get her attention, she nodded, but then proceeded to head toward the back of the store to avoid McKeon, according to the report. The report says that Ratliff told police she stayed inside the store for 10-15 minutes to make sure McKeon had left, but when she eventually left he was outside waiting for her.

The report says McKeon followed Ratliff to her truck, “aggravating her about the amount of chickens she possessed at her home.” McKeon shouted that she was, “stupid, ignorant and he wanted her gone,” according to the report.

Alderwoman Ratliff reported that there had been multiple run-ins with McKeon over the last year. The report details Ratliff being harassed by McKeon at the Alexander Municipal Building, as well as “five separate occasions” of McKeon “spying on their residence” in Alexander.

Earlier on the same day Ratliff filed a police report about the incident at Dollar General, police had made contact with McKeon when officers were dispatched to a disturbance on Kathy Drive, according to the report.

McKeon was apparently at the home on official water department business, according to the report. The report states that McKeon had “demanded” that he be granted access to the homeowner’s private property to inspect their equipment. The yard has multiple “no trespassing” and “private property” signs posted all along a large privacy fence stretching the property.

An officer and detective with APD informed McKeon that he could not be granted access and there were proper channels that needed to be taken. McKeon told the officer that he would “suffer the consequences if (he) continued to defy him.”

Approximately 15 minutes after APD’s run-in with McKeon on Kathy Drive, the same officer witnessed a truck running a stop sign and nearly colliding with their cruiser, the report states.

The report says that McKeon, upon being asked why he was in the area by APD Chief Burnett, McKeon “indicated that he was gathering evidence of code violations in the neighborhood.” Burnett said he didn’t have the authority to harass people, to which McKeon objected, according to the report. McKeon was cited and released for the traffic violation.

According to the report, McKeon is known to not only be the general manger of Saline County Water Works, but he also serves on the Alexander planning commission and the Saline County waste management board. The report says that Alexander Mayor Paul Mitchell said he was aware of multiple complaints about McKeon's harassment, but they were afraid to come forward and file charges.