The computer web browser history of a police captain who recently resigned after his arrest for loitering for the purpose of sexual activity reveals he did some web surfing for explicit content on his state-issued computer.

Arkansas State Police say it has a monitoring system and computer policy in place, but the captain wasn't under investigation prior to his arrest.

Based on the web history, television station Fox16 obtained from Arkansas State Police in a Freedom of Information request, former ASP Captain Bryan Davis started his Internet activities early on August 30th with searches of Craigslist personal ads around 8 o'clock that Tuesday morning. 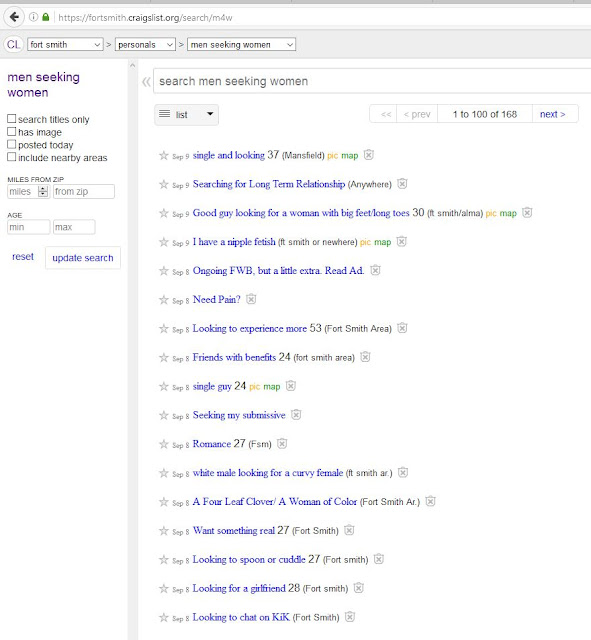 It continued throughout the day, multiple ads, multiple email messages, until it ended at Wifelovers.com around 4 o'clock that afternoon.

Wifelovers.com was the last page Davis accessed before being arrested around 4:30 p.m. near a walking trail in a Fort Smith park.

Audio from undercover officers' interactions with Davis reveal the circumstances on scene.

"I have never done anything like this, and I don't want to get in trouble," Davis can be heard saying.

"We don't have court on the side of the road. I've been doing this for years," the male undercover officer tells him. "You were doing some stuff you shouldn't have been doing and you know it..."

The male undercover officer has been identified from Davis' affidavit for arrest
as Richard Wright and the female officer as Kathy Jones.


Arkansas State Police declined an on-camera interview with FOX16, saying its computer use policy speaks for itself. You can read the full policy here. It does state that inappropriate computer use includes accessing pornographic material, which can result in termination. That use can be monitored without notice.

State Police spokesperson Bill Sadler said the agency uses to methods of monitoring computer use: electronic gateway and live monitoring. According to Sadler, the electronic gateway will flag a website that is not pre-loaded or seems to be inappropriate. The user can still access that website by entering a username and password. That can then generate a note, according to Sadler, that can be reviewed by administrators.

When FOX16 initially asked Sadler if the system had generated any notes on Davis' use, he said no search had been conducted by Arkansas State Police regarding the notes from the monitoring system. He noted the only search that had been conducted on that computer once it was taken out of Davis' possession was the search to fulfill FOX16's AFOIA request for the web history.

So, it remains unclear if the monitoring system worked as described. It's also unclear why the web history only extends back to a limited amount of time. According to Sadler, ASP could only provide the web history that was on the machine itself. It remains unclear if Arkansas State Police in fact have a web browser history that extends further back than what was provided through its network monitoring program.

ASP would not disclose how the monitoring system is implemented or how use is monitored off the network. Sadler did confirm that commanders like Davis are given greater access.

"Because of the necessity of mobility of not only the commanders, but all commissioned personnel, there are provisions in the state police computer network for these users to gain internet access through other sources.  This is not "leniency", this is an accepted provision in operations that allows state troopers to carry-out their law enforcement duties, regardless of location, terrain or environment.  Use of an alternate off-network source does not negate the department's policies, regardless of the connectivity source," Sadler said.

But it remained unclear how or if the agency could then monitor the use in those situations of off-network connection. Sadler said he wouldn't explain the monitoring further, "Any further discussion of the state police computer network operations and protocols, other than those I disclosed to you on Wednesday would compromise the integrity of the system and it would be absolutely irresponsible to disclose anything further.  Bottom line, regardless of connectivity, policy still applies."

Sadler also stated that ASP would be looking no further into how long Davis may have been using the agency's resources in this way. According to Sadler, the issue was irrelevant because Davis had resigned. When asked if the agency was not interested in how a commander could possibly sidestep monitoring and ignore the policies to access sexually explicit content, Sadler again reiterated that the issue was irrelevant.

"You can try to connect the dots, if you want. The fact of the matter is he resigned. He is no longer an employee of the Arkansas State Police. It's irrelevant," Sadler said.

We have some news for you Bill, it is extremely relevant to the people of Arkansas and should be a great concern to the Arkansas State Police that this was able to occur in light of policy and procedures in place to monitor state owned computer usage.

If ASP does not recommend that his certification be revoked, Davis can go to work at any law enforcement agency in Arkansas that will hire him.

Links to our previous posts about Davis:
http://badgovernmentinarkansas.blogspot.com/2016/09/arkansas-state-police-captain-arrested.html