Who knew that a little town in rural Woodruff County with a population of only 649 residents could be bustling with criminal activity.

Grab a cup of coffee, sit back and take a look.

Between January 2001 and December 2014, Rhonda Williams and her husband, Gary Williams, both of Des Arc, received more than $52,000 by conspiring to use the housing authority's funds to pay for personal expenses, according to a news release from Chris Thyer, U.S. attorney for theEastern District of Arkansas.

Rhonda Williams, 50, was the executive director of the housing authority and Gary, 59, was the maintenance supervisor, according to the release. 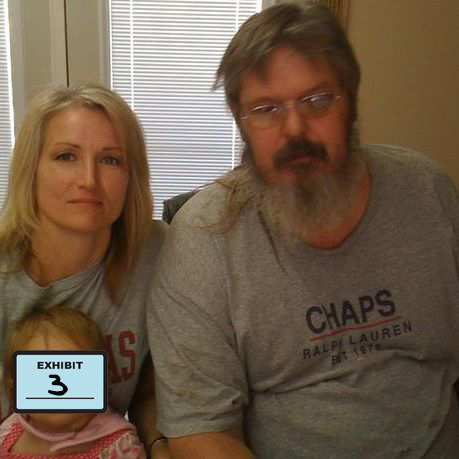 Each pleaded guilty to felony charges of conspiracy to commit bank fraud and money laundering.

According to federal court filings, the Williamses "solicited and accepted bribes and kickbacks from Housing Authority contractors," who paid them with public money received from the U.S. Department of Housing and Urban Development.

The Williamses also were accused of using the housing authority's equipment for construction on their personal residence, and paying for personal expenses with the agency's credit cards.

In once instance, the Williamses purchased a 2011 Chevrolet Tahoe valued at $32,129 with a check drawn from the housing authority's bank account and made payable to Gwatney Chevrolet in Jacksonville, according to court records.

All bank accounts related to the charges have been frozen, and, under the plea, the Williamses will forfeit all property traceable to the offenses. The full extent of the housing authority's loss will be determined during a sentencing hearing, according to the news release.

Both Gary and Rhonda Williams are represented by Jacksonville attorney Hubert Alexander.

The couple had been under investigation by the IRS Criminal Investigation Division and the U.S. Department of Housing and Urban Development.

On March 4, 2015, a U.S. magistrate judge issued temporary restraining orders preventing the pair from accessing from their retirement policies held by the Lafayette Life Insurance Co. along with bank accounts at the Signature Bank of Arkansas. It was during the period of the restraining orders that the government established probable cause that the bank accounts held proceeds from the conspiracy, according to court records.

In February 2015, when the IRS executed a search warrant at the Williams residence, they found several illegal items. The IRS notified the Prairie County Sheriff's Department because those items where not covered by their search warrant.

The Prairie County Sheriff's Department then obtained a search warrant picked up some marijuana, scales, Hydrocodone and Adapex (in pill bottles prescribed to other individuals) and 44 firearms. The firearms are a problem in that Gary is a convicted felon (Possession of a Controlled substance in 1977) and it is unlawful for him to possess any firearms. 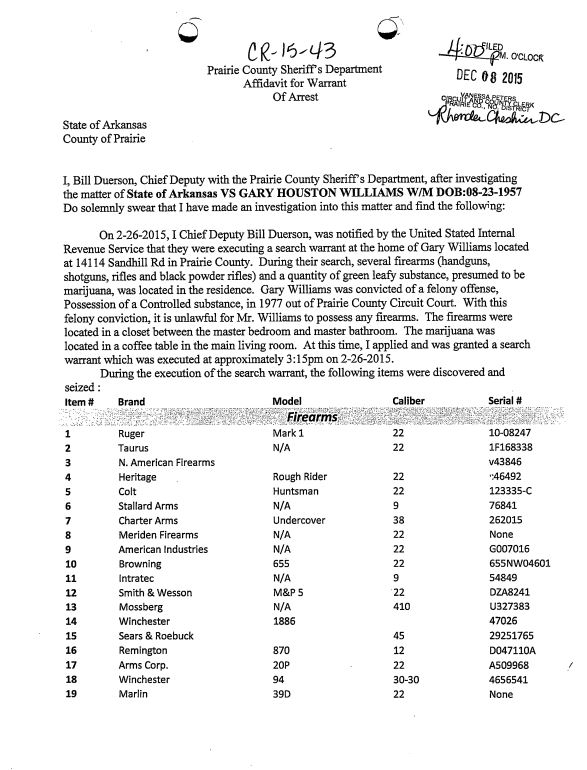 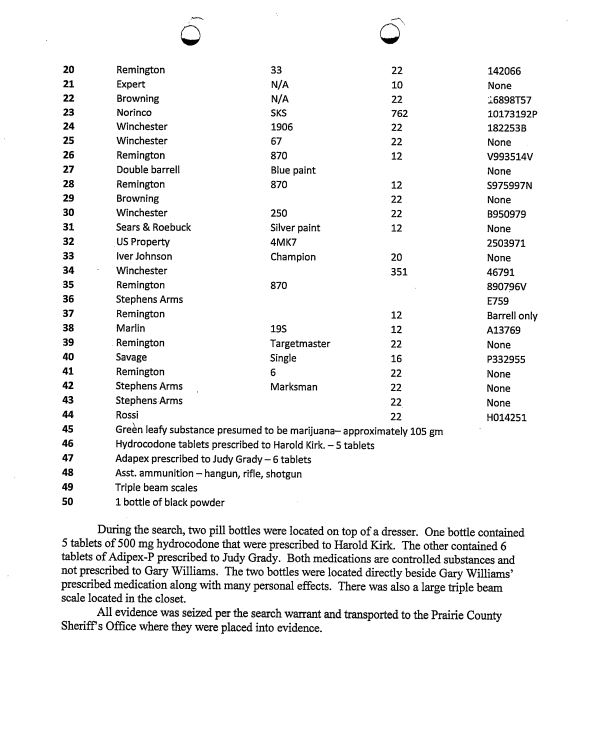 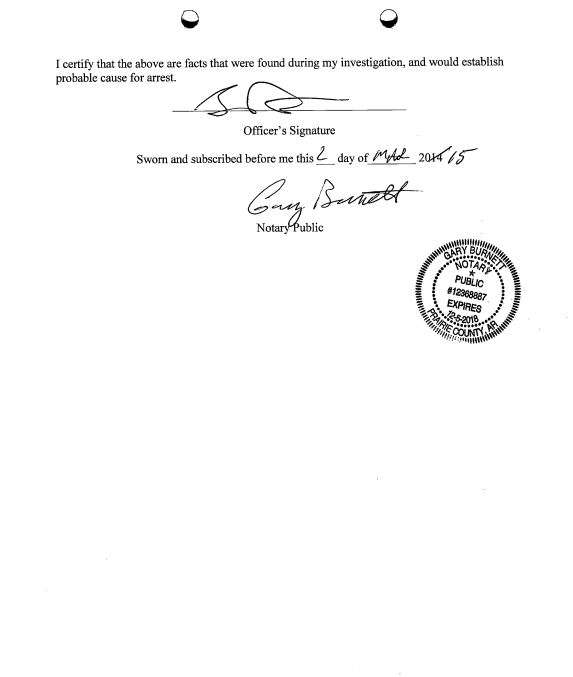 Those items led to charges being filed against Gary Williams. 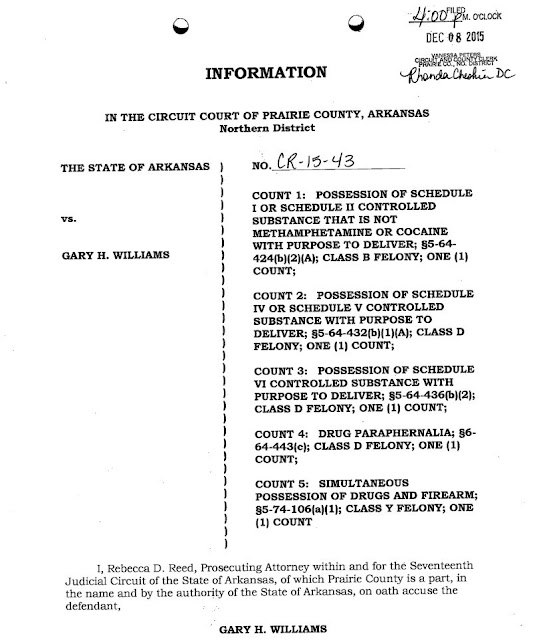 Apparently Rhonda was a little upset when the IRS and Prairie County Sheriff's Department showed up at her home, unannounced. 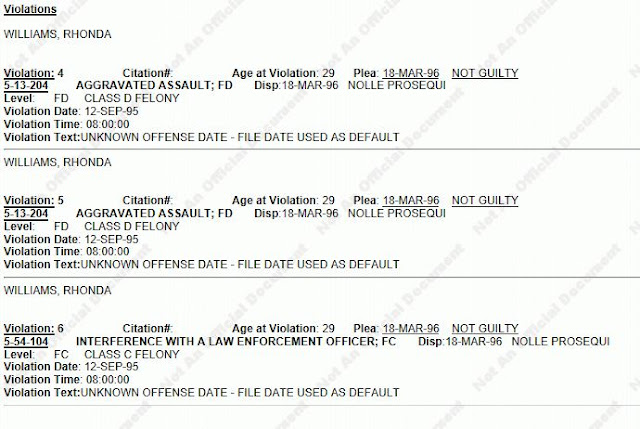 The case in Circuit Court is still active and no trial date has been scheduled as of the publishing of this story. 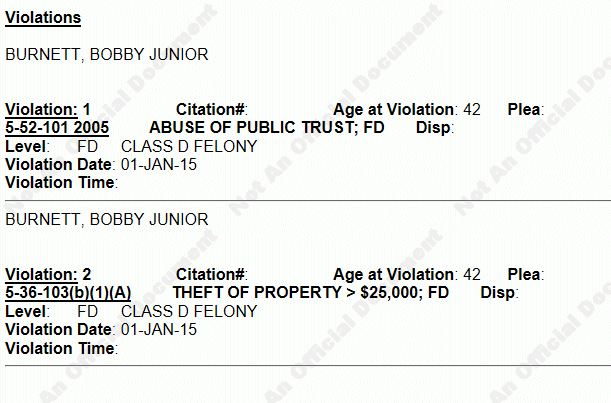 Burnett was arrested after a year long investigation and audit.

Cotton Plant resident Ruth Floyd had been giving Burnett money to pay off fines her son owed.  Official records did not reflect credit for the cash payments made by Floyd to Burnett.

To make matters worse, Burnett was fired and it was discovered that the only remaining officer did not possess the required certifications and was fired as well. It's not the towns first experience with certification issues (see item #4).

You might be asking yourself why would they have a non-certified officer?

Take a look at the minutes from a city council meeting back in 2012. 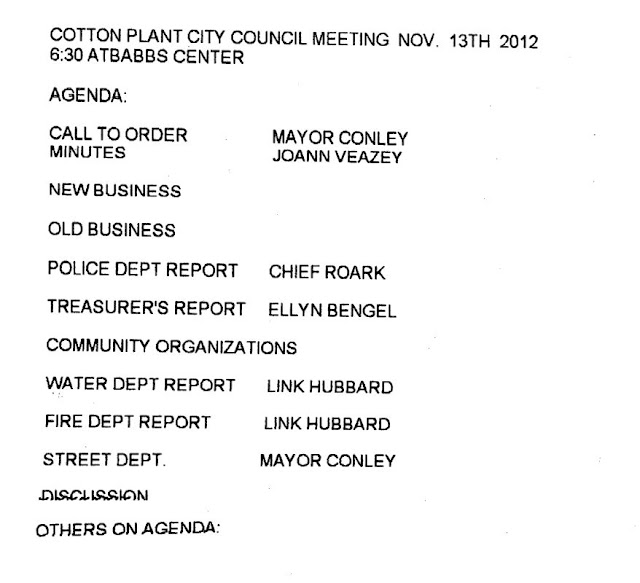 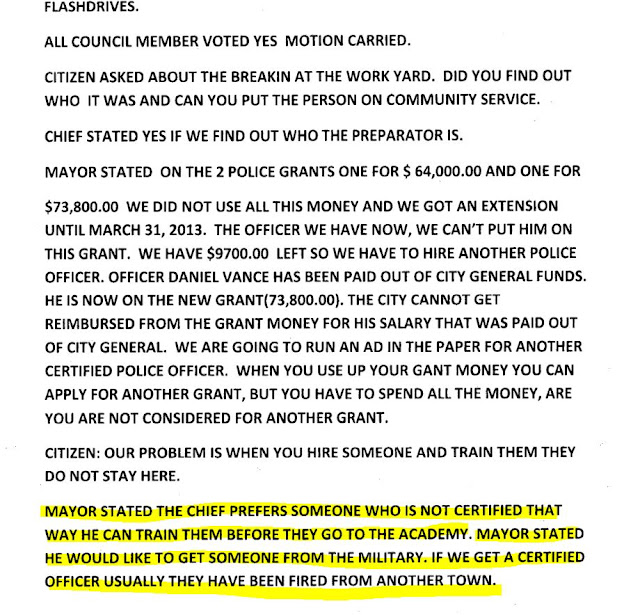 Ronnie Conley, the mayor of Cotton Plant was arrested by Arkansas State Police at 3:00 a.m. on September 6, 2015.

Mayor Ronnie Conley admitted to a reporter for television station KATV that this wasn't the first time he's been arrested for DWI.

Conley was booked at the Brinkley City Jail early on September 6th, arrested on charges of DWI, refusal to submit to tests, speeding, littering and drinking on the highway.

He posted a $1,750 bond just hours later and got his car out of impound at  shortly after.

The vehicle Conley was driving was his city-issued white Crown Victoria with a green-stripe.

Conley stated, "I was taking care of city business as well."  But when asked if drinking on the job is city business he responded, "Well politicians have a tendency to drink all the time we have business. We have social affairs where we do drink of course."

In an interview with KATV, Conley admitted to being arrested for DWI while he was in college.

Back in 2012, Conley was at the center of a recall vote to get him out of office. The recall organized by Concerned Citizens of Cotton Plant gathered more than 100 signatures for the recall - a large percentage of registered voters in the town of just under 700 people.The recall failed and Conley remained in office.

"Having a DWI is a whole lot different than having a recall," said Conley. "Those are not connected none whatsoever."


"It's a common thing that when we do go to conferences and things like that, we do drink," said Conley. "It was a stupid mistake and I'll live up to and take my responsibilities."

In June 2007, A federal jury awarded the ex-wife of the Cotton Plant police chief $60,000 in a civil rights lawsuit.

The jury awarded Florence Nance, formerly Florence Roark, $60,000 in compensatory and punitive damages upon finding, after nine hours of deliberation, that the subordinate officer used excessive force to arrest her at the direction of her husband, Chief Archie Roark.

Nance, 56, testified in a federal trial in Little Rock that after church services on the morning of Jan. 16, 2005, she learned that her husband of 12 years, who was the pastor of the church as well as the town police chief, had been cheating on her with another woman.

Nance admittedly flew into a rage and told her husband she was going to confront the woman, according to testimony. She said she drove from her home in DeValls Bluff to Cotton Plant to confront the other woman at the woman's mother's house.

Nance testified that she stood outside the house while the other woman, Stephanie Hurchin, stood in the doorway. The two women shouted at each other as Hurchin's mother stood between them, Nance testified.

Suddenly, she said, she saw Officer Raymond Milton drive up in his patrol car. Milton was a noncertified auxiliary officer who was the only other officer on the two-man force.

Nance testified that she believes that Roark called Milton and gave him an order to stop her from confronting the woman. Roark, also 56, testified that he didn't call Milton, and that he later learned Milton had responded to a 911 call.

Although Roark suggested to jurors that his wife was out of control, leaving his subordinate officer no choice but to use force to subdue her, Nance claimed that Milton simply "accosted" her without reason. She said he pepper-sprayed her in the eyes, threw her to ground face first and then twisted her arm behind her as he handcuffed her and placed her in the patrol car.

Milton, who left the department last year and whose whereabouts remain unknown, did not attend the trial. Roark, who is not a lawyer, represented himself because the city said it could not afford to hire an attorney.

Mental health professionals testified that Nance had post-traumatic stress disorder, with recurring flashbacks of being attacked.

The jury of two men and nine women, including two therapists, ordered Roark and Milton to jointly pay Nance $10,000 for violating her civil rights during the arrest, which resulted in her being released at the police department without being charged. Another woman on the panel was excused during the trial for family reasons.

The jury also ordered the men to jointly pay Nance $5,000 for her state-law claims of assault, battery and false imprisonment. 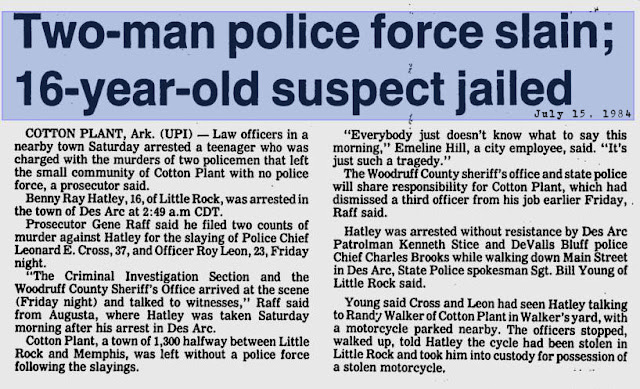