On Tuesday, August 10, 2021 I received a call from a special agent with the Little Rock field office of the Federal Bureau of Investigation in the Public Corruption Unit.

The individual that called refused to provide his name, and I assumed it was a scam call like one about your Social Security number being disabled or the last call about your car warranty expiring.

The man said "we think you have some information that can help us on one of our cases."

I told him to call an attorney friend of mine and try to schedule the meeting.

I gave them the number of fellow blogger and attorney Matt Campbell.

I called Matt and gave him a heads up. Some time later Matt sent me a text. 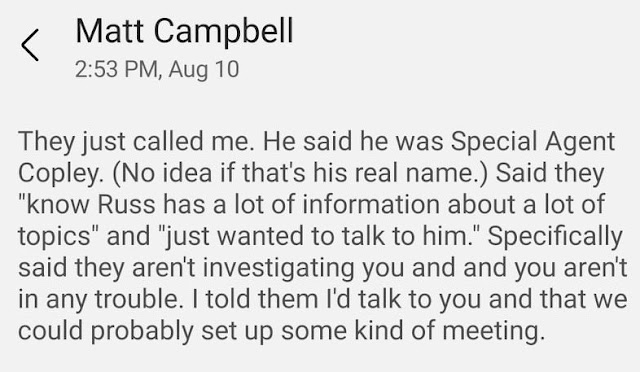 I wanted Matt along to be a witness as I felt certain I would not be permitted to record the meeting.

Many of you know before I became an investigative journalist and blogger, I had considerable experience as an investigator (state agency and financial institutions). In those positions I frequently worked with law enforcement agencies including the FBI.

Here are some business cards of the agents I worked with when working in those positions. 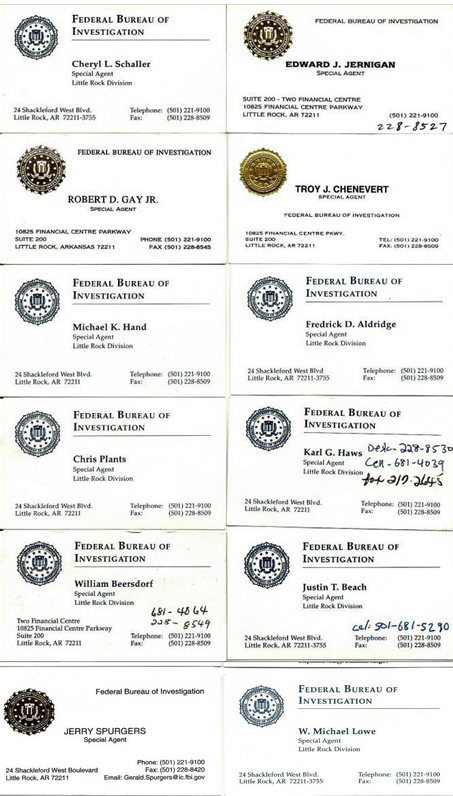 Let's take a minute to give some additional background information, back in 2016,  after an in-depth investigation and a lawsuit to force release of public records, we found that Cody Hiland, then a prosecuting attorney, had illegally used federal funds to pay for payroll taxes, etc.

You can read all about that by clicking here. 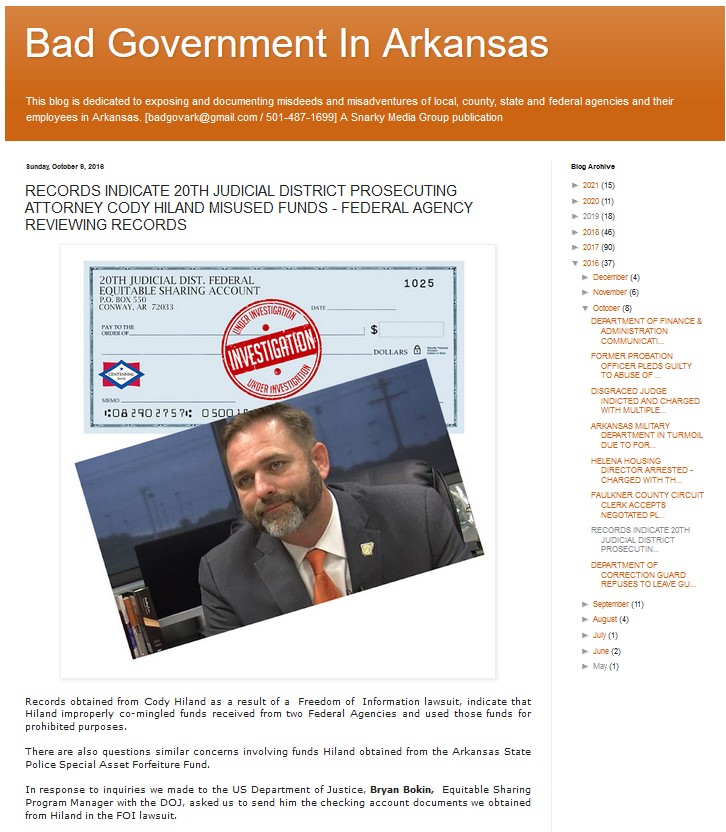 Hiland also had some problem with an employee that used her position to obtain sealed court records in another state about her ex-husband's new wife.You can read about that by clicking here.

Hiland also employed an investigator with a questionable background and law enforcement credentials obtained under false pretenses. You can read about that by clicking here and here.

The FBI investigated that matter with Hiland and the drug task force he ran out of his office in Conway.

I worked with a special agent in the Public Corruption Unit and shared records I had obtained via FOI request. Her name was Tonja Sablatura.

The Hiland investigation came to a screeching halt when he was appointed the U.S. Attorney for the Eastern District of Arkansas.

I  sent a text message to her about the call from Special Agent Copley to confirm his identity.

Matt was going to tag along, but he had to meet with a client so I went by myself.

As I was going through their security checkpoint, I was told I could not take an electronic devices inside., So I had to take my cellphone and digital recorder back to my vehicle.

I met with Copely and his partner in what used to be the receptionist office inside the front door on the right (counter and glass window that looked out on the fourier of the building). A big empty room with three or four old desk chairs and a big ass free standing copier/printer.

After some small talk they got into the reason for the meeting.

They reiterated what they had said to me and Matt about wanting to sit down with me as they believed I might have some information that would assist them in an investigation.

The targets of the investigation?  The feckless Little Rock mayor and the troubled, corrupt police chief.

You dear readers,  can drawn your own conclusions.

Ours here at Snarky Media Group is that some shit is about to go down.