Faulkner County Deputy Prosecuting Attorney Hugh Finkelstein turned over some of the items sought in a AFOIA lawsuit to keep his boss, Cody Hiland, from facing sanctions and possible charges for refusing to comply with the Arkansas Freedom of Information Act and provide responses to multiple AFOIA requests made from July 2015 through January 2016.

Hiland initially responded to a FOI request back in June 2015.  But when we posted a story about Boyce Hamlet, tainted ABC Enforcement Director,  providing false information on his job application with Hiland's office, Hiland quit responding to FOI requests.

The material provided shows that Hiland also violated Arkansas Code Annotated § 12-9-602, which requires a hiring agency to make an inquiry to the Arkansas Commission on Law Enforcement Standards and Training ("CLEST") to find out if/why that employee left a previous job in law enforcement.

Had Hiland not violated the law and made the required inquiry when he hired Boyce Hamlet, Jr., he would have known about his status as a Brady Officer, and then would have known to make the required notification to criminal defendants in cases that Hamlet was connected or involved with. Or possibly he would have not hired Hamlet as the risk of having an untrustworthy liar that lacked credibility would be too troublesome for him.

Hiland violated this law a second time when Hamlet left employment with his office by failing to file the required form (Personnel Change-In-Status) with the CLEST.

Copies of bank statements and checks from Hiland's Equitable Sharing Account indicate that ABC Enforcement has been the only state agency to receive funds to purchase equipment.  There appears to be some questionable expenditures that will be the subject of a post on an upcoming new blog dedicated to revealing corruption, maleficence and the like concerning various city, county and state agencies, officials and employees.

Faulkner County Circuit Judge David Clark did not see anything wrong with the chief legal officer for the 20th Judicial District failing to follow the law and provide any response to multiple FOI requests.

Perhaps his judgment was clouded by his friendship with tainted ABC Enforcement Director Boyce Hamlet.

An email sent to us expressed concerns with Judge Clark hearing the AFOIA lawsuit. 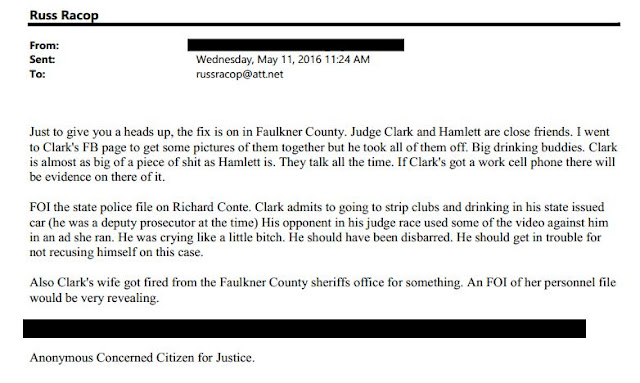 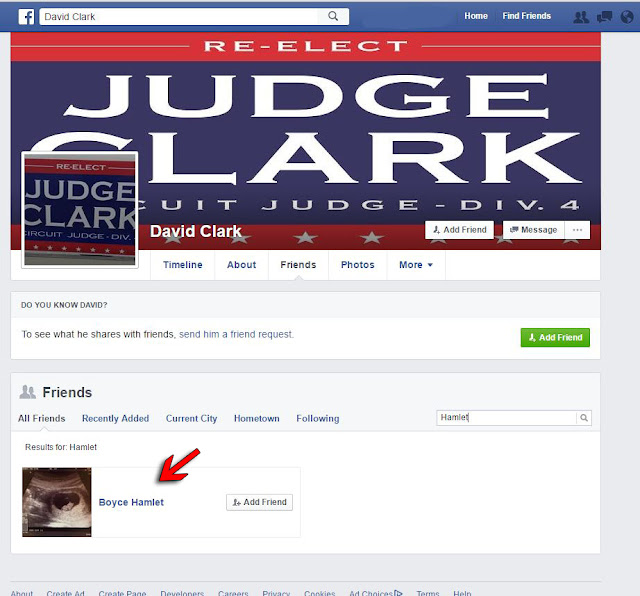 Clark denied that he and Hamlet were friends and stated that his twitter account was inactive and that he wasn't sure the application was still on his phone.

With all due respect Judge Clark that is pure bullshit. 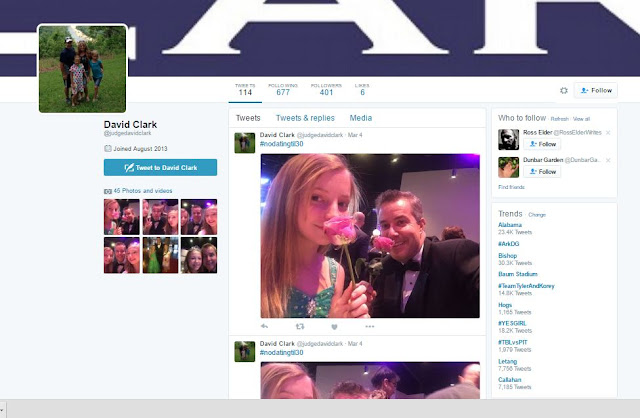 The way our some of our public officials act and follow the law when it suits them should surprise us, but it is all too frequent of an occurrence.

When elected public officials refuse to follow the law, it undermines public trust and confidence in government.