Boyce Ashley Hamlet was appointed to head the Enforcement section of the Arkansas Alcoholic Beverage Control agency by Department of Finance and Administration director Larry Walther at the direction of Governor Asa Hutchinson after he was elected and took office in 2015.

What Hamlet did not disclose and he kept hidden as a deep, dark secret was that when he was a trooper recruit at the Arkansas State Police back in 2000, he was caught cheating on a weekly exam.  Then to make matters worse, he lied multiple times to investigators with the ASP Special Investigations Unit and was fired.

Hamlet then proceeded to lie on job applications and give false dates of employment at other jobs he held to cover up his hiring and firing by the Arkansas State Police.

He did that for about 15 years until it was discovered by our sister blog -  Bad Arkansas Alcoholic Beverage Control.

Hamlet's appointment to the position is extremely questionable. The minimum qualifications for the position as Director of ABC Enforcement is that the individual must  must have basic, general, intermediate, advanced or senior certification as a
law enforcement officer by the Arkansas Commission on Law Enforcement Standards and Training (“CLEST”).

Hamlet is only certified to be a probation or parole officer in the State of Arkansas. 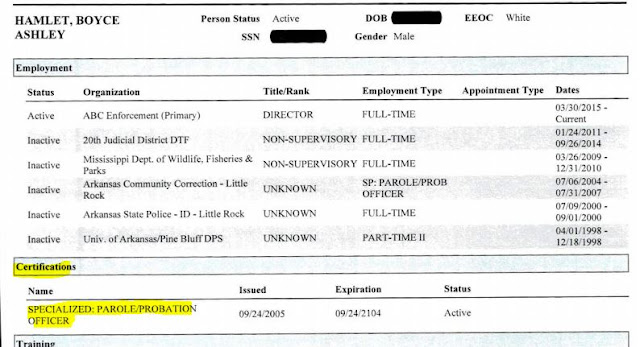 The job description for the position also states that supervisory and budget experience is necessary.

He had no supervisory experience prior to his appointment (and very little after it).

In fact, Hamlet could not supervise the 18 agents in the agency and promoted 4 agents to be supervisory agents (with a $5,000.00 raise for each of them) and then got himself a $8,000.00 raise after being on the job just 3 months claiming that his duties had increased due to reorganization, even though there was no change made in his job description or duties and he delegated supervisory responsibilites to others.  Not bad work if you can lie and get it.

Well, he did have one extra duty, he was designated as a fire monitor for his floor.

Hamlet never prepared or had anything to do with a department budget in his life.  In fact according to Hamlet, he has a psychological condition that prevents him for understanding simple mathematics and he was awarded a full ride to the University of Arkansas at Pine Bluff because of his disability. In order for Hamlet to graduate from UAPB he had to get the to waive the requirement for college algebra for him to graduation (he could not pass the course after several attempts).

There is a pending lawsuit that seeks to remove Hamlet from the position for which is is not qualified and have him return all funds he received as salary. 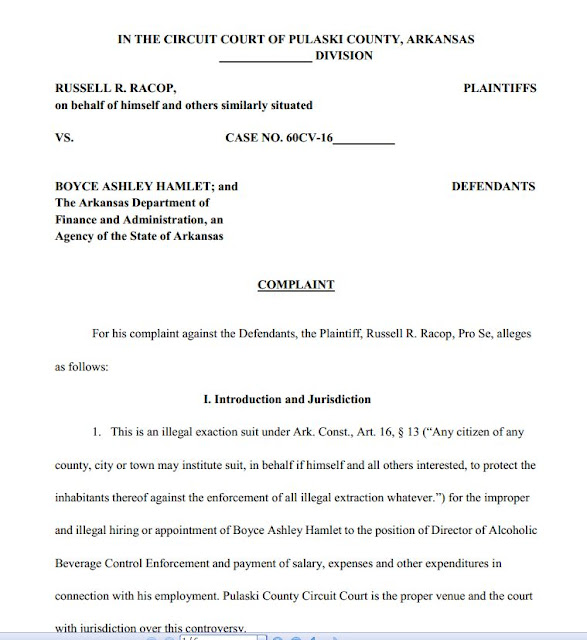 Check out our blog - Bad Arkansas Alcoholic Beverage Control Division  for more on Hamlet and other things going on at the ABC.