Another school district, this time a questionable charter one, plays fast and loose with the Arkansas Freedom of Information Act.

We made a FOI request on August 8th to Academics Plus for records involved in the termination of Stephan Owen. 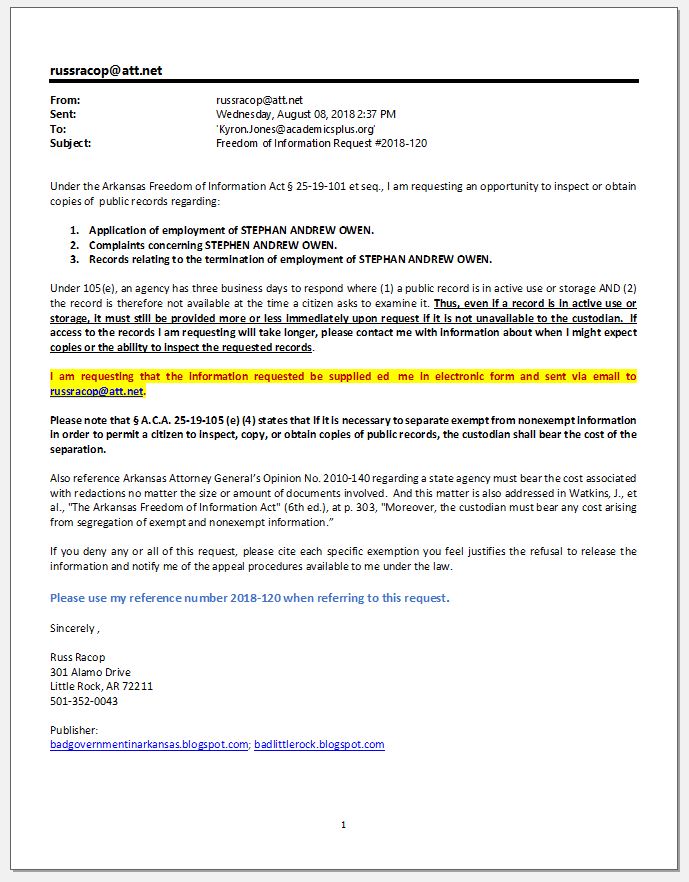 Owens was fired last month after the school administration and the Maumelle Police Department investigated allegation of sexual misconduct.

Owen is accused of fostering an inhospitable environment for the female athletes he coached, including playing sexual music, telling his players how many women has has had sex with and allowing his players to change on the bus. He has also been accused of changing in the girls locker room, though the coach insists that only occurred when no girls were present, under a locked door.

“The only time I ever did, I was in the locker room with it locked and closed, and I changed and left before any other girl came back in there,” Owen told OzarksFirst.com.

The coach told OzarksFirst that claims against him ignore the larger circumstances in which they occurred. When he was asked about controversial, sexual music, Owen turned over the team’s playlist to authorities. And when he was asked about players changing on the bus, he pointed to the fact that the team always traveled with other adult chaperones.“I always had a parent or I had an adult chaperone on the bus” Owens added.
We also sent a FOI request to the Maumelle Police Department. 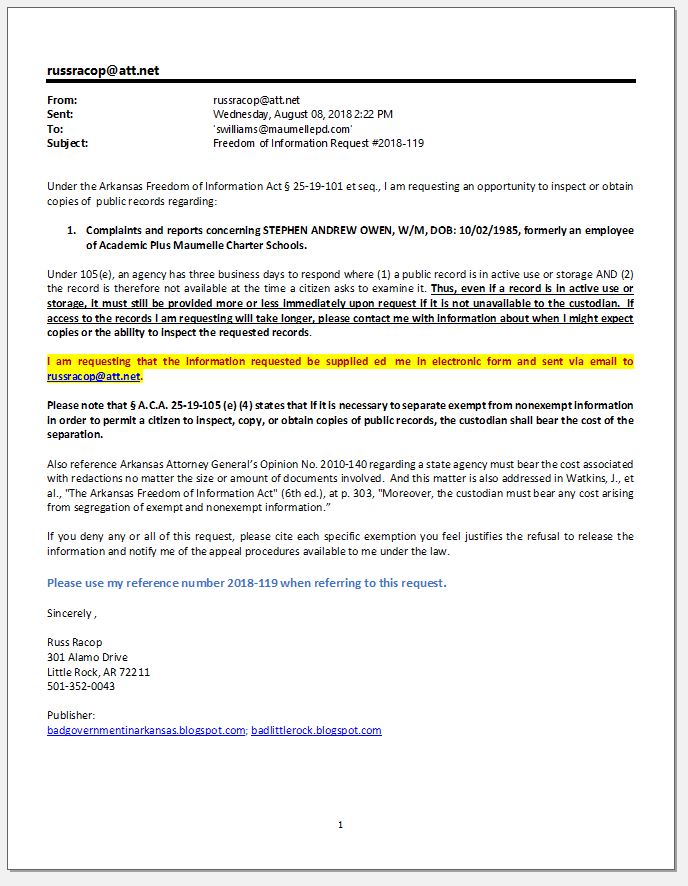 They immediately provided the requested records. 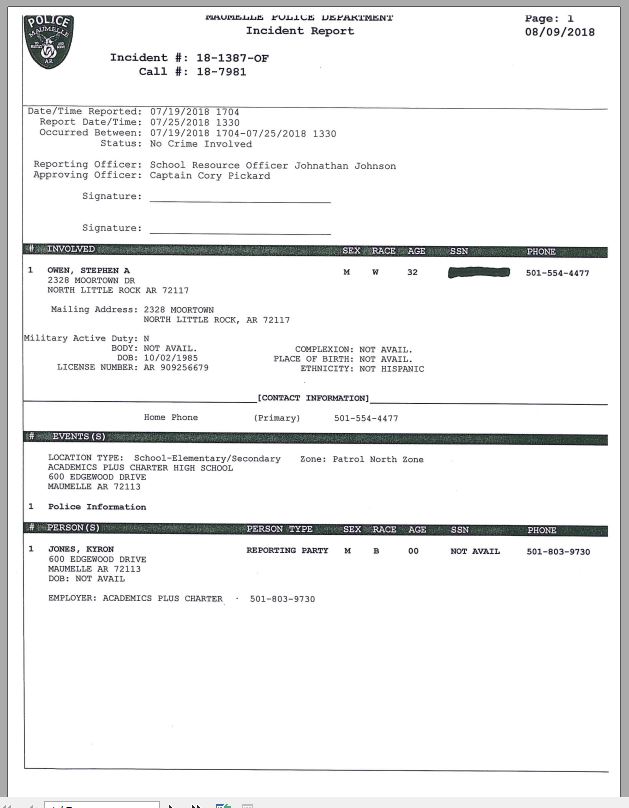 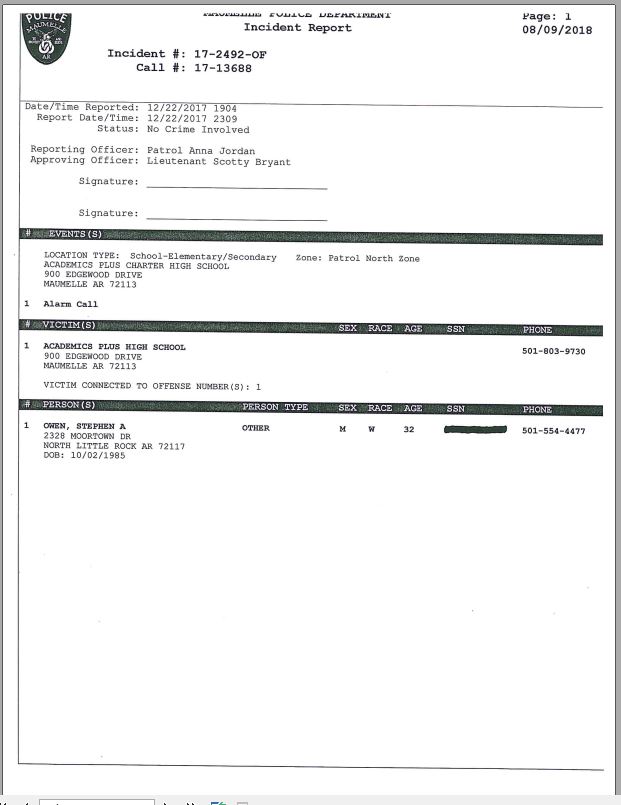 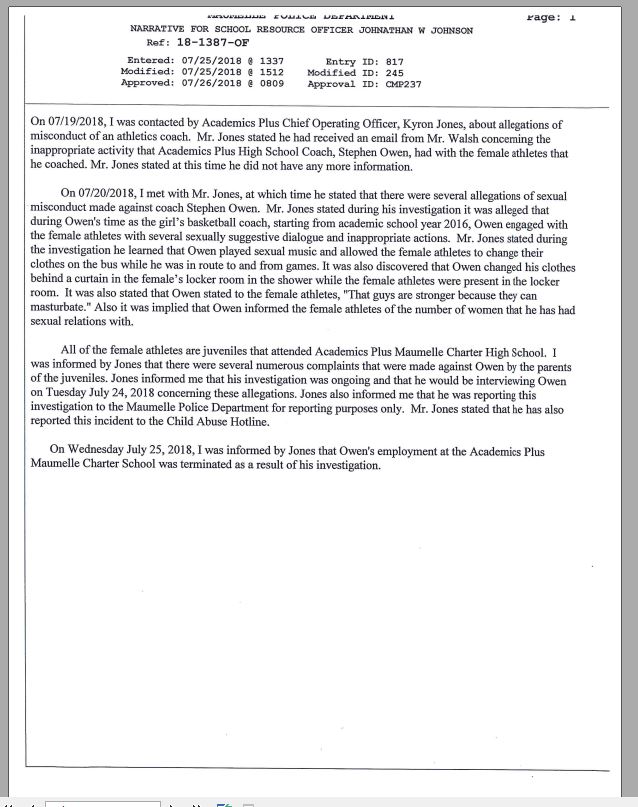 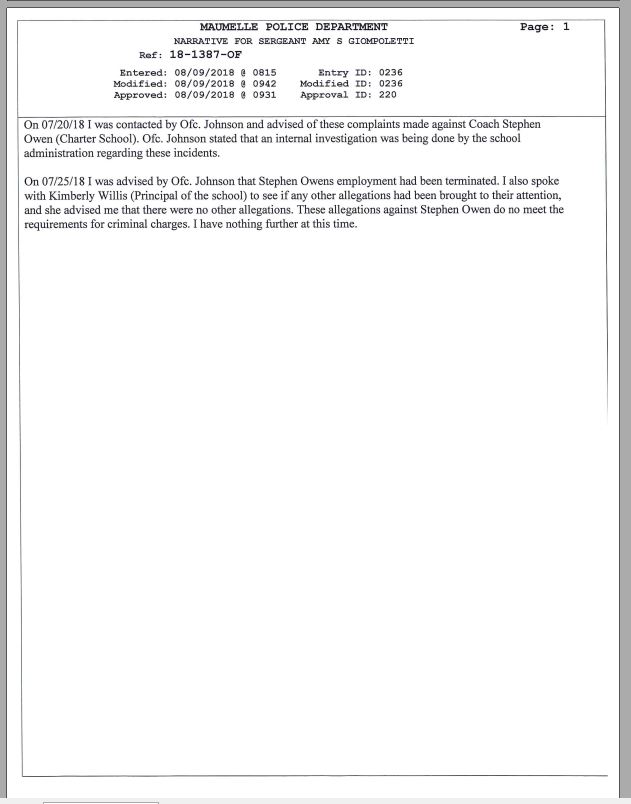 Academics Plus apparently did not attempt to reach Owen by phone or leave a voicemail notifying him of the request for records and tell him that he needed to immediately advise them if he was going to seek an opinion from the Arkansas Attorney General. Instead two days later they sent him a letter and gave him three days to give them a response. 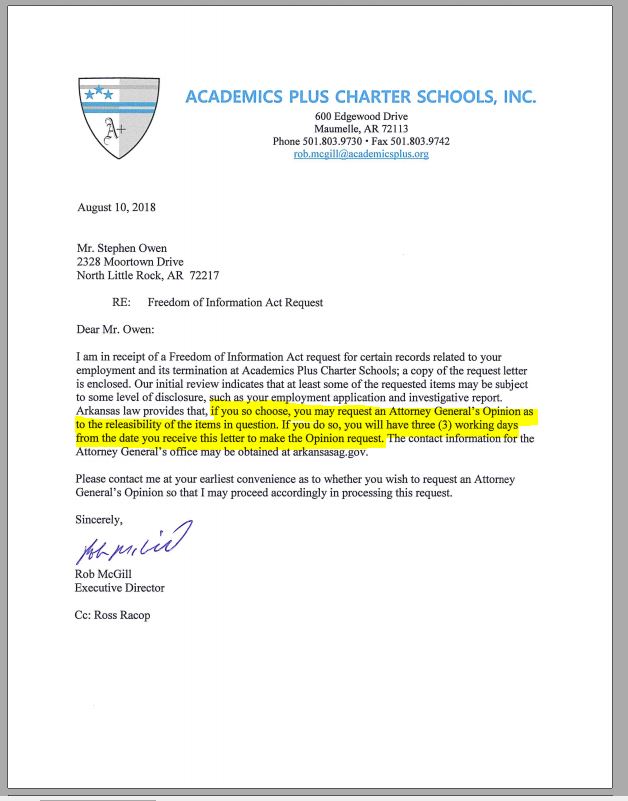 Our publisher sent McGill an email advising him of his violation of the AFOIA. 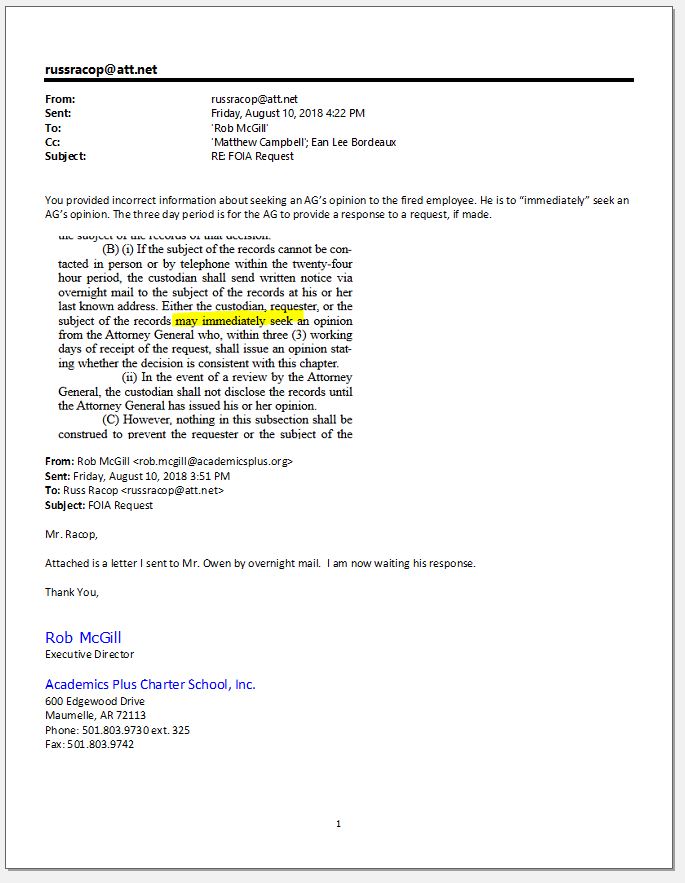 McGill called our publisher early this morning and admitted that he made a mistake in advising Owen that he had three days to advise the school if he was going to request an AG's opinion regarding the school's decision to release the records.

McGill has placed Academics Plus in a precarious position.

If the school does not release the records today, they are subject to legal action under the AFOIA.

Due to McGill's error, Owen could take legal action to stop release, for what little good that would do, after all the records sought are public records under the AFOIA.

Perhaps school administrators like McGill and others (Like John Colbert with Fayetteville Public Schools) receive bad and illegal advice from the Arkansas School Board Association's staff attorney Kristen Craig-Gould-Garner. 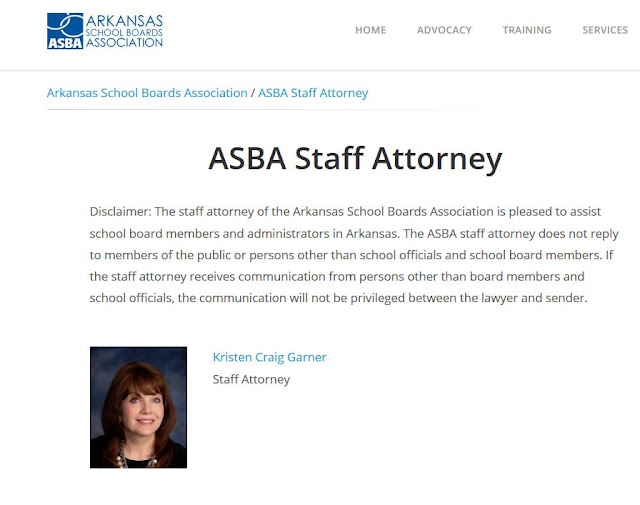 We found only one case in the last decade in which Kristen Craig-Gould-Garner represented anyone or any agency as an attorney.

Her lack of understanding of the Arkansas Freedom of Information Act and poor training of it to school districts could place them and superintendents in legal jeopardy.

Bad Government in Arkansas blog has never paid any agency for a FOI response.

We request that the response be provided in electronic form and be emailed to us or posted online for downloading.

Alternately, we have also provided a thumb drive or DVD's to agencies to use to provide such a response.

All public agencies are required to have appropriate software to be able to comply with such requests and have since the year 2000.

We will post the records from Academics Plus regarding Owen's termination or a copy of the AFOIA Denial of Rights complaint later today.

According to an email received from Academics Plus School District Executive Direct Rob McGill, Owens has indicated to him that he will be seeking an opinion from the Attorney General. 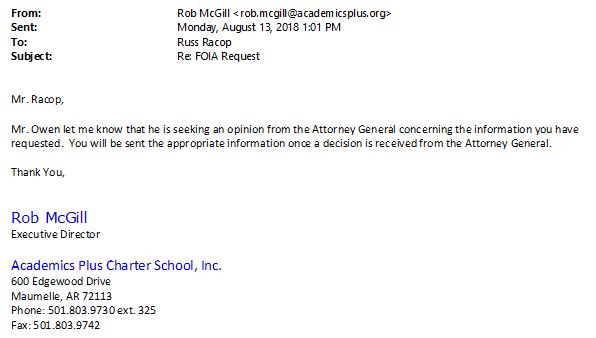 In three days we will have the documents as the AG will no doubt find that the records sought are public records and subject to release.

In the meantime, will McGill accept service? 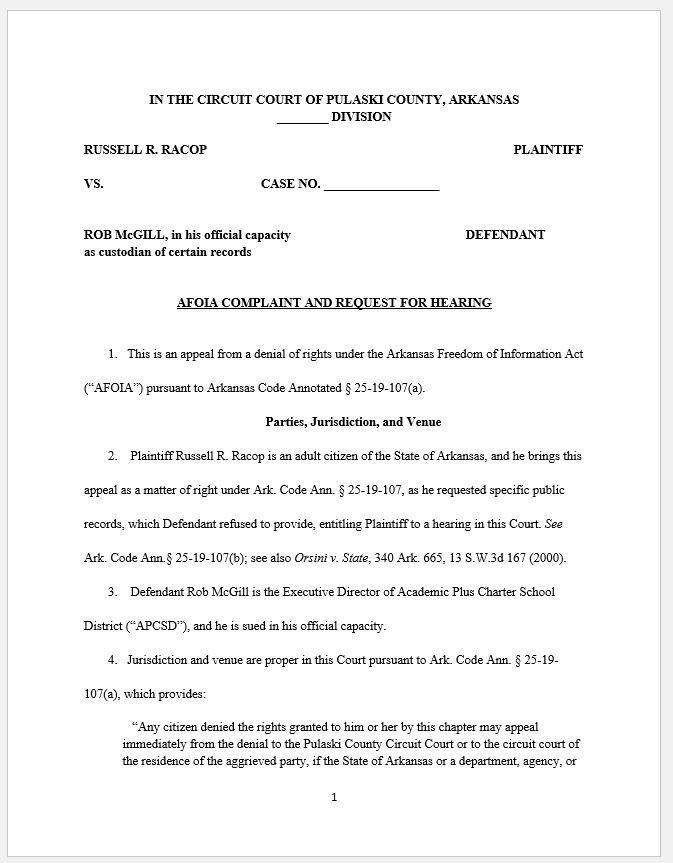