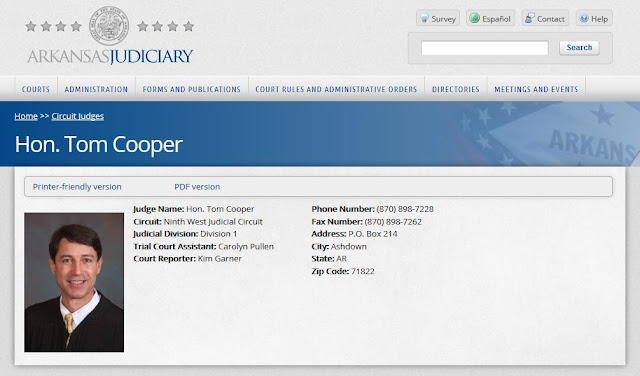 The judge trekked up Hwy 71 from Ashdown and our publisher and the FPS outside council traveled separately from Little Rock for what will probably end up being a precedent setting case regarding the Arkansas Freedom of Information Act.

Our publisher made a FOI request to FPS on June 19th. FPS failed to follow the statutory provisions of the Arkansas Freedom of Information Act and even after the Arkansas Attorney General issued two opinions favoring the release of the requested information, FPS refused to do so even thought they believed the documents to be public records.

Under the AFOIA, the district's refusal to provide the requested public records to our publisher is a denial of his rights under the AFOIA.

This is how a FOI request is supposed to be handled in Arkansas.

2.  The agency has 24 hours to determine if the records sought are subject to release under the AFOIA.

3. Within that 24 hour period, the agency has to immediately notify the subject(s) of the request so that if they object to the release, they can seek an opinion from the Arkansas Attorney General regarding the agencies intent to release the records.

The timeline above shows how the FPS outside council failed to adhere to the law and violated our publisher's rights under the AFOIA after the AG issued two opinions that the records were releasable yet failed to release to records upon demand.

It was also clearly detailed in the complaint he filed.  You can view it by clicking here.

Our publisher stated that the complaint and exhibits showed with a preponderance of the evidence that FPS and their outside council had violated his rights and the process of the AFOIA in the matter before the Court.

He detailed that the public interest in the release of the records outweighed the privacy rights of Shae Newman, who had filed a  "Jane Doe" lawsuit against FPS, in an attempt to stop the release of what FPS, the Attorney General and our publisher believed were releasable public records.

This is what he stated tipped the scale in favor of the public interest:

The public interest in the disclosure of the documents far outweighs Shae Newman's, a.k.a, "Jane Doe", privacy interests.  First – her attorney, Suzanne Clark, leaked the letter to Chris Lawson to the press on April 2nd - presumably because she and Newman were not happy with the way the school district was handling the situation and wanted to put public pressure on the school district to act.  In that letter, she quotes from the texts and emails exchanged between her client and Dr. Wendt, references taped conversations, and other facts regarding the relationship.  Similarly, she  leaked her client’s EEOC statement to the press the Friday before Dr. Wendt’s hearing before the school board presumably to influence the public’s opinion without having her client, Shae Newman, appear at the hearing.  The statement is extremely detailed and quotes at length from the texts and email - but it is one sided.   If Newman was truly the victim, why not make all of the texts available so they can be read in context. She has put the information out in the public.  She should not be able to manipulate the publication of information when it suits her.

Second - Clark's April 2nd letter references that some members of administration knew or suspected the relationship and did nothing.  The public has a right to know if this is true in order to determine if there is a systemic problem at the school district which would warrant further discipline and/or training.  The fact that she alleges Dr. Wendt slept with a board member is also something the public should know more about - especially since they renegotiated his contract in January and removed the morals clause.  The school district is now not only facing a lawsuit from Shae Newman, a.k.a., "Jane Doe", but one from Dr. Wendt.

Third, there is a school board seat up for election in November.  The public is entitled to know the information so that it can make an informed decision in this election and whether action should be taken to remove other board members.

Fourth, the cat is out of the bag.   Everyone knows that Shae Newman is "Jane Doe"  and has ever since she brought her complaint as evidenced by Clark's statement in her April 2nd letter that her client was getting questioned by the press and public.

Fifth, the public is entitled to know why Dr. Wendt was not immediately suspended with pay pending an immediate investigation.  This goes to whether in house counsel, the inept Chris Lawson,   whose position was created by Dr. Wendt specifically for Chris Lawson,  -was derelict in his duty and should be disciplined as well as School Board Chair Justin Eichman.  Dr. Wendt presumably could have been harassing other employees during this time.

Sixth, this is the third sex scandal in six years involving high ranking members of the school administration;  the superintendent, the head football coach, and the athletic director.   This indicates that there is a systemic problem at the school district which may warrant oversight by the Department of Education.

Shae Newman, a.k.a., "Jane Doe", could have appealed the decision that the records are public.  She chose not to do so and purposefully filed a lawsuit for declaratory judgment (without asking for a TRO or preliminary injunction until hours before this case was to be heard) knowing that the declaratory judgment route would be dragged out.  Also,  it puts the school district in the position of having to defend its decision which it does not really have an interest in doing given it could mean more jobs lost and more lawsuits plus the embarrassment of how badly this whole thing was handled.

Our publisher also questioned why if Newman was so bent on keeping her text messages secret and hidden had her attorney, Suzanne Clark, not presented an emergency ex parte petition for a TRO preventing release of the records with another judge in the Circuit since Judge Martin had been on vacation when her lawsuit against FPS was filed and would not be back until August 9th?

That sort of thing happens all the time when a judge assigned to a case is sick or out of town when something pops up.

The outside counsel, Missy McJunkins Duke, hired due to in-house council Chris Lawson's ineptitude whined about her client, Superintendent John Colbert, not being served notice of the hearing.

The fact that she was present and representing Colbert showed that she had constructive notice even if service had not technically been satisfied.

Also present in the gallery and permitted to address the Court was a stand in for Suzanne Clark, the attorney for Shae Newman, a.k.a., "Jane Doe", Payton Bentley.

Young Bentley was allowed to address the court as well, and he stated that our publisher should not have been allowed to have the hearing, that he should have filed as a party in Newman's lawsuit.

What the heck you say?

Maybe he was out hiking when the AFOIA was being discussed in law school.

Our publisher exercised his rights under the AFOIA and used the only legal remedy available to him, one that is specifically granted in the law for dealing with failure of an agency to respond to a AFOIA request.

Perhaps he should stick with hiking and watching the Razorbacks lose games like his partner Mrs. Clark will be losing Shae Newman's lawsuit against FPS and leave the lawyering to folks that know what's what like our publisher.

Maybe he should also check with his boss, Mrs. Clark, as she has filed a motion to objecting to just that suggestion and seeks to limit participants in the Newman/"Jane Doe" lawsuit. 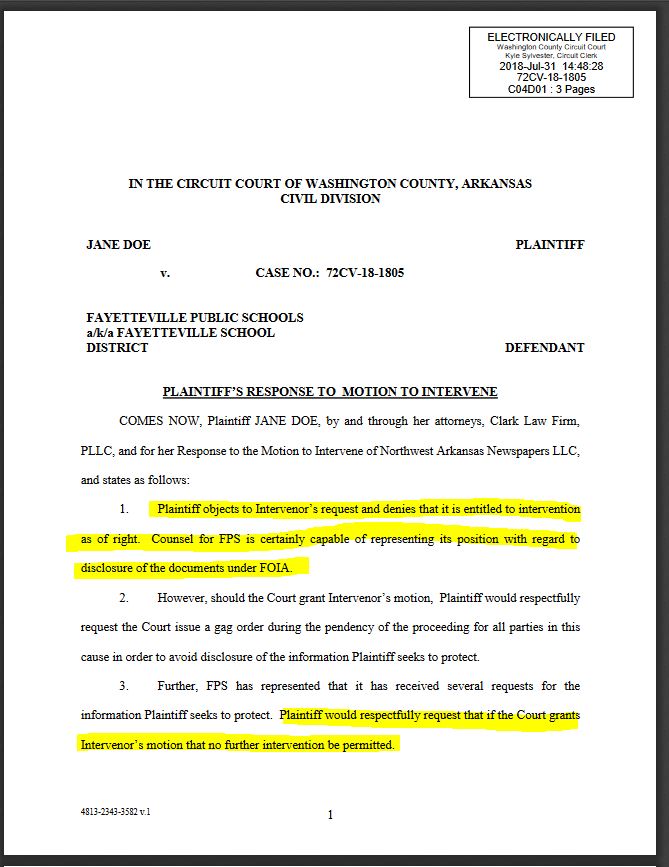 Judge Cooper was reluctant to make a ruling Friday afternoon until after Judge Martin returns from vacation on Monday (August 6th) and look at the mess of filings Clark has made on behalf of her client Shae Newman who she listed as "Jane Doe" even though everyone in Fayetteville and all over the world knows is Shae Newman.

Judge Martin might recuse citing the fact that Judge Cooper has heard a companion case and for "judicial economy" pass the case onto him.

Judge Cooper wanted to set another hearing for August 13th so that he could wait and see what action Judge Martin takes.

Our publisher suggested that Judge Cooper take the matter under advisement and depending on the action Judge Martin takes, he could make a ruling without having to hold another hearing. Judge Cooper liked the suggestion and that's exactly what he did.

If Judge Cooper finds that our publishers rights were violated, our publisher can then file a criminal complaint against Duke and her client FPS Superintendent John Colbert.

The in-house counsel  for the FPS, Chris Lawson, is an inept idiot and the outside-counsel hired to represent the district, Missy McJunkins Duke, is much the same.

The way that she handled the FOI request has resulted in a complaint being filed with the Arkansas Office of the Committee of Professional Conduct .

Also at the hearing was the editor for the Northwest Arkansas Democrat-Gazette, Rusty Turner and reporter Ron Wood.

During the hearing, Judge Cooper asked if anyone from the paper was present as they filed a motion to intervene in the lawsuit filed by Newman against FPS.

Turner responded saying that their attorney was out of town. Judge Cooper asked if he wanted to address the Court and Turner said that he like our publisher favored release of the requested documents.

The paper ran a story this morning about the hearing. 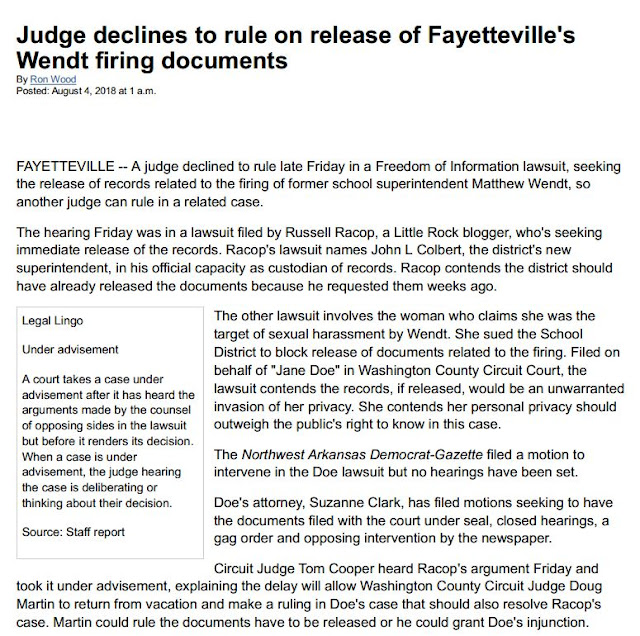 The full article that appeared in the Northwest Arkansas Democrat-Gazette today can be viewed by clicking here.

Apparently the paper does not want to report what we have reported and just about everyone in Fayetteville knows, that "Jane Doe' is actually Shae Newman.

Maybe they are afraid Newman will sue them.

We and our publisher hopes that she sues us.

The discovery process in that case, if one is filed, will get at all the requested documents and more.

Our publisher could subpoena her cellphone records, copies of all text messages, photos, videos and more.

This matter is far from being over. If Judge Cooper denies our publisher the documents and fails to make a finding as to whether or not FPS and their outside counsel Duke violated his rights under the AFOIA, an appeal is planned.

That appeal will could set a precedent for all other AFOIA cases.