North Little Rock Detective and President of their Fraternal Order of Police, Michael Gibbons, admitted in an agreement with the Arkansas Ethics Commission that he (and by implication the other NLR police officers that accompanied him) violated the law by accepting an illegal gift from Jerry Jones and the Dallas Cowboys. 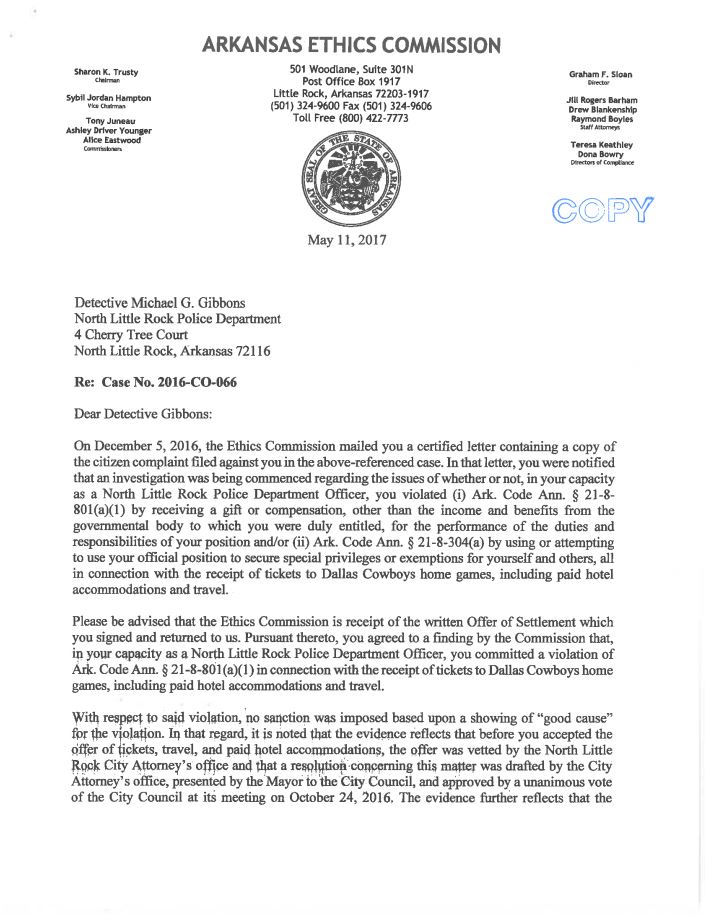 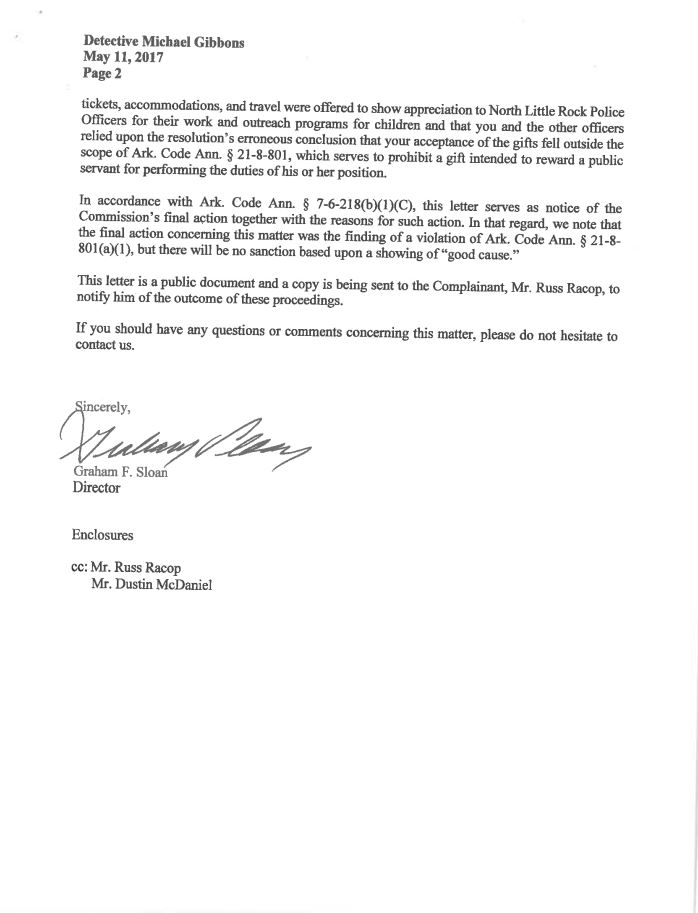 Gibbons and 120 NLRPD officers and family members (400 total) were gifted tickets to a Dallas Cowboy game, travel and luxury accommodations by Jerry Jones.  An added bonus was a swag bag for each that contained various team merchandise items.

Gibbons arranged the illegal gift when he was attending a game (free ticket again) with Catherine Dolan, a former Pulaski County Deputy Prosecuting Attorney he arrange to spend some time with while in Dallas for a work related meeting. Dolan is now a staff attorney with the Cowboy organization. 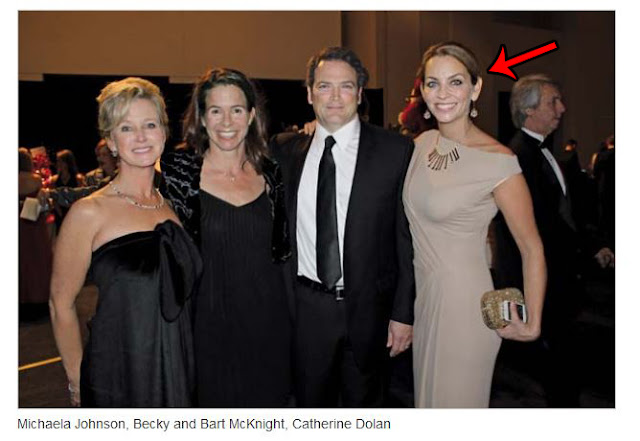 If that is not enough, these defense attorneys can produce documents and photos to substantiate allegations of a "payoff"  and make Gibbons and the 102 other officers looks like corrupt police officers.

As we reported in a previous post, the Ethics Commission sent Gibbons and Jones an Offer of Settlement letter.  Gibbons did the only thing he could do and take the offer.  It appears that Jones did not. A hearing (Final Adjudication) has been set for May 19, 2017 at 9:00 a.m. for Jones. 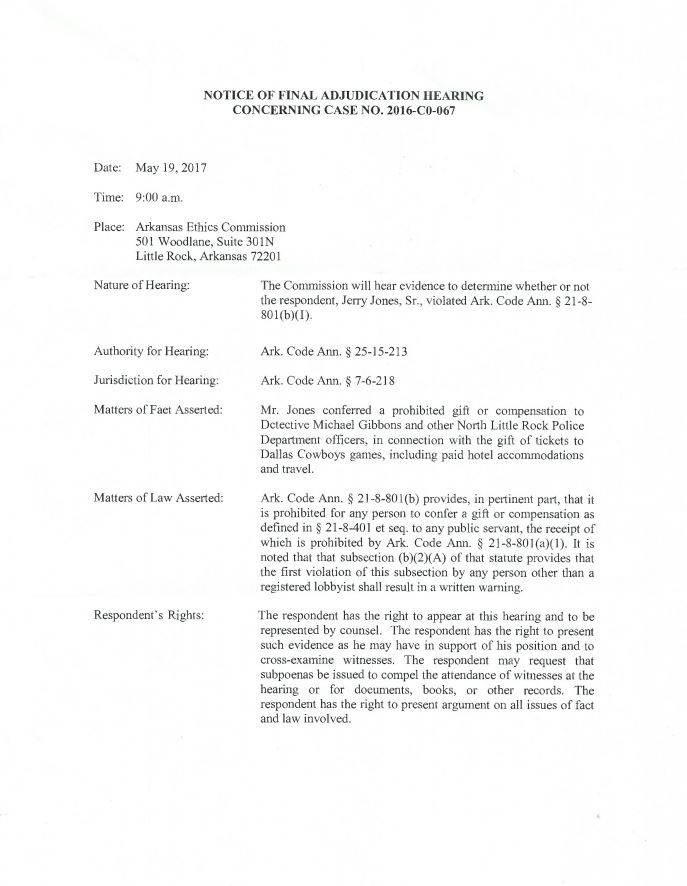 Based on what transpired last month at the probable cause hearings, the Ethics Commission will find that Jones violated the law with his gift and give him a written warning  letter. The Commission has done this in the past in similar cases.

In fact, their report used at the probable cause hearing states what will happen if they found probable cause that Jones violated the law - which they did at that hearing in April.

While the Ethics Commission dismissed the complaints against the NLR Mayor and aldermen, it is extremely clear that the Commission determined that their resolution was a failed attempt to legitimize an illegal gift to a public employee.

Even though the Commission dismissed the complaints against the mayor and aldermen, the can refer the complaints to the appropriate law enforcement agency for further action.  We doubt that the Pulaski County Prosecuting Attorney has the balls to go after them.  That's how the Good Ole Boy System operates.

We expect there to be some issues with state and federal tax collection agencies for Gibbons and the 102 officers over the value of the benefit of the gift the city alleges it obtained from Jones. We must point out that FOI requests for documents from the mayor resulted in no documents to indicate any contact whatsoever between city officials and the Cowboys organization.  It was all handled between Gibbons and the Cowboys before the city got involved.

Ark. Code Ann. §7-6-218(b)(3)(C) provides that all records relevant to an investigation and upon which the Ethics Commission has based its decision, except working papers of the Commission and its staff, shall be open to public inspection thirty (30) days after any final adjudication in which the Commission makes a finding of a violation.
Based on previous experience with the Ethic Commission, there are four records which they will provide to us in 30 days: (1) the written offer of settlement, (2) the final action letter, (3) the public letter of caution, and (4) the probable cause report.

We will post an update when we receive the material the Ethics Commission is permitted to provide to us.

It was not the intent of the publisher of this blog in his complaints to the Ethics Commission to punish the NLR Police Officers. If that was the case he could have filed complaints against all the officers and filed an injunction against the city of North Little Rock and the officers to stop them from accepting the illegal gift.