According to a story posted online by Today in Fort Smith, an employee of the IT Department of the city of Fort Smith was caught in the act of viewing pornography on his city owned computer. 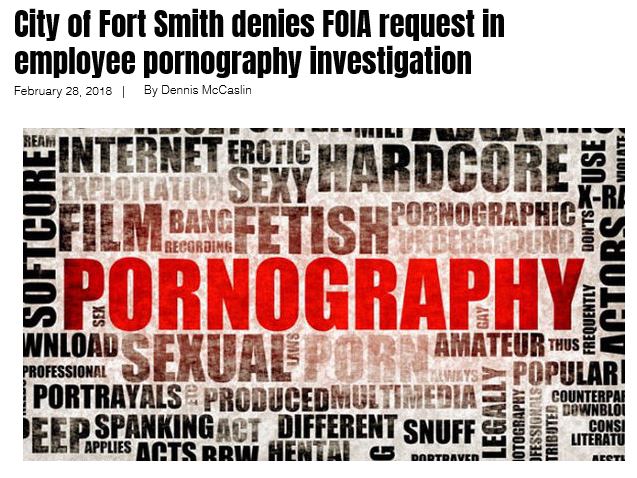 Today in Fort Smith reported that the incident  occurred  back in January in which an employee of the city's Information Technology Department was "sent home" as a disciplinary action after being observed viewing pornography on a city owned computer during city time.

According to sources, the incident, which possibly was captured  on  video as  evidence and was taken by another employee, resulted in the offending employee being "sent home" for less than a day for the breach of city policy.

Today in Fort Smith sent a Freedom of Information request to the city and was advised that there was no releasable information regarding the incident.


When the city employee was sent home that was in fact a form of suspension, thus making the details surround that particular personnel action releasable under the Arkansas Freedom of Information Act.

After some difficulty and having a terse, contentious telephone conversation with the Fort Smith City Administration Carl Geffken,  a pretentious prick, we made a verbal FOI request for a document that listed the names and positions for all employees in the city's Information Technology Department and asked that it be emailed to us.

Like Today in Fort Smith, we will also be submitting a FOI request for documents regarding the incident and hope that they refuse to provide us with documents as well. We haven't been in court over a FOI denial of rights matter in a while and have some new legal arguments ready to try out.

The city of Fort Smith has a long history of shitting on transparency - take your pick from one of the posts by attorney and fellow blogger Matt Campbell on his Blue Hog Report - http://www.bluehogreport.com/tag/fort-smith-police-department/

Numerous lawsuits have been filed against the city regarding non compliance with the AFOIA and they are in the middle of another one currently.

We look forward to having our turn.