The Arkansas Ethics Commission held a Probable Cause Hearing on Friday, November 17th for the complaint filed by the publisher of this blog against April Mathis.

April Mathis did not appear at the hearing and was not represented by her attorney James Barger.

The publisher of this blog was permitted to address the Commission and he reiterated the facts of the complaint.


He also informed the Commission that after the filing of the complaint, Mathis had attempted to use her position to influence a Faulkner County Sheriff's Deputy. That attempt resulted in her separation from employment with the Office of the Prosecuting Attorney for the 20th Judicial District (see this previous post). He pointed out that a Special Prosecutor has been appointed to look into a complaint presented by the Conway Police Department regarding the same matter that resulted in the complaint before the Commission.

He stated that this was a indicator of a pattern of behavior by Mathis,  to use her position as an employee of that agency to get her way even if it was in violation of the law.

A review of the Commissions file revealed some interesting information provided by April Mathis.


When the District Clerk from Flathead County Montana was finally able to speak with April's former boss, Cody Hiland, Hiland pulled April into his office and asked her what she was up to. Hiland demoted her from Case Coordinator to Hot Check Coordinator with a reduction in salary and sent her home for three days without pay.

Mathis also made some wild, unsupported accusations in written statements:

2. She alleged that Peg Allison, the Flathead County Montana District Court Clerk is not a real person because she Googled that name and found nothing. FALSE. 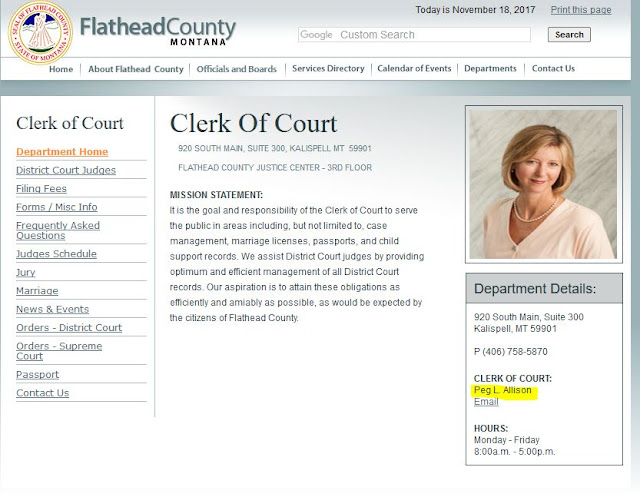 3. She alleges that the Flathead County Montana District Clerk's Office sent her sealed court records by mistake and they are trying to "cover their ass." FALSE. Exhibits in the complaint clearly show that Mathis requested all the documents under false pretense.

April Mathis has told what few friends she still has that what this blog has posted about her is all false and made up.  If that is the case, why has her attorney not demanded that it be taken down? Why did the Ethics Commission accept the complaint about her and move forward? Because it's all true that's why.

Mathis clearly has issues with the truth.  Just check out her heavily retouched photo she posted on her Twitter account.


There is an  order for a psychological evaluation in her open domestic relations case.  Can't wait to see how that turns out.

The Ethics Commission will send Mathis an Offer of Settlement, in which she will have to agree that she violated Arkansas law by using her position as a public employee to obtained sealed records from another state for her our personal benefit and gain.  They can also impose a fine anywhere from $50 to $2000.

She will have a few days to sign and return the letter. If she does not sign the Offer of Settlement,  the Commission will set the matter for a full final hearing.