FORMER ASSISTANT TO GARLAND COUNTY JUDGE ADMITS TO FRAUDLENT USE OF COUNTY CREDIT CARD - $347K WAS USED TO PAY TAXES, BILLS, UAF FOOTBALL TICKETS AND A TUXEDO FOR HER DOG


Kristi Lyn Goss was an administrative assistant to Garland County Judge Rick Davis until May when an audit revealed suspicious activity by Goss. 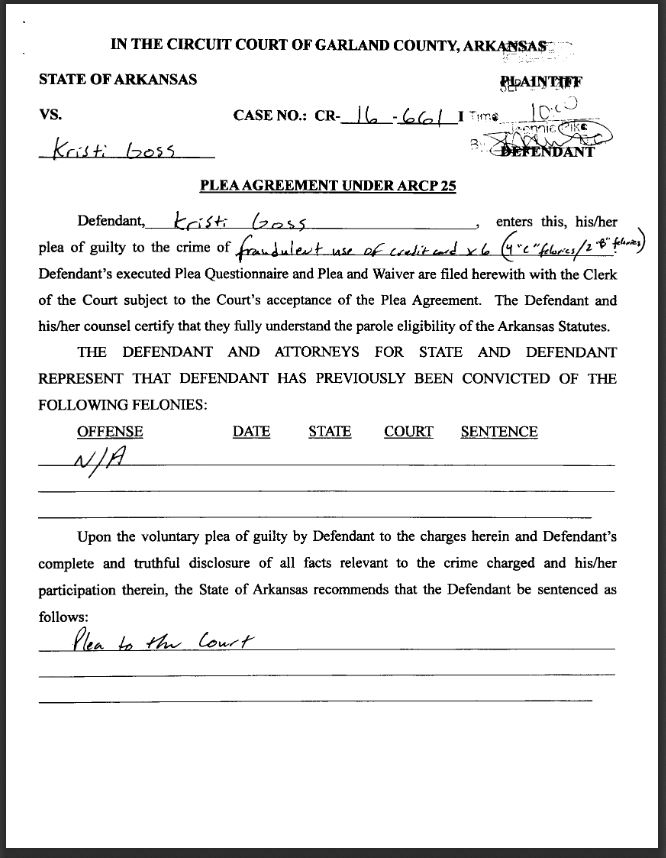 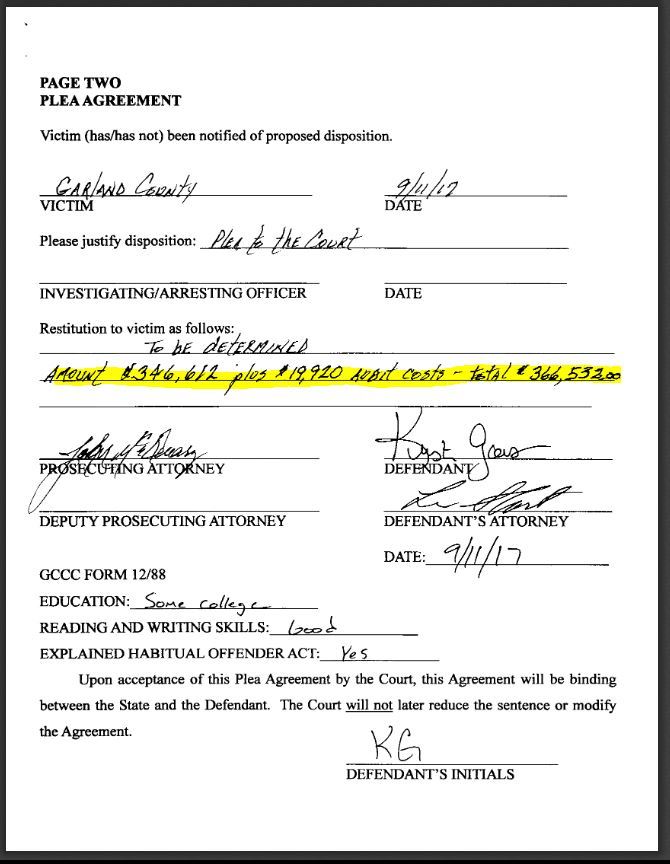 Goss, who was arrested Oct. 25, 2016, and later released on $50,000 bond, was represented by appointed public defender Lee D. Short, of Little Rock. Special Prosecutor Jack McQuary, of the state office of the prosecutor coordinator in Little Rock, represented the state.

A gag order limiting pretrial publicity in the case was issued Oct. 26, 2016, and will remain active until sentencing. The Garland County Info blog has a nice post about the shenanigans relating to that. You can view it by clicking here.

Goss had been employed by Garland County since 2004, starting under former County Judge Larry Williams, and was officially terminated on June 3, 2016. She had reportedly left her position at the end of May 2016 after the fraud allegations came to light.

Former Prosecuting Attorney Terri Harris filed the charges against Goss directly to circuit court and told The Sentinel-Record at the time of filing there had been "insinuations" that the county judge's office was under investigation and she was "dragging her feet," which she stressed was not true.

She said all county employees "fully cooperated" with the investigation and "no one else other than the person we have charged is implicated in any wrongdoing with the use of the card."

County Judge Rick Davis issued a statement at the time of Goss' arrest noting she was an employee he "inherited" and when the financial irregularities were discovered he immediately notified the credit card company, state Legislative Audit, the prosecuting attorney, the sheriff, and the county attorney to request an investigation.

"The termination process for this employee was initiated according to the steps outlined by counsel from the county attorney and county policy," Davis said in the statement.

"I hope for swift justice in this situation and hope a message has been sent to all that any and all misconduct and noncompliance with county policy and the law will not be tolerated and appropriate actions will always be taken to bring justice," he said.

According to the affidavit filed by ASP Special Agent David Moss, who was assigned the case July 1, 2016, Goss fraudulently charged approximately $200,000 worth of items, including personal bill payments, to a Garland County credit card that was obtained in December 2011.

Garland County Comptroller Susan Ashmore discovered the discrepancies in May 2016 after Goss was not paying county bills on time and "not executing her duties in a timely manner." Legislative Auditor Jimmy Locke discovered 3,722 charges made on the card between December 2011 and May 2016 and confirmed $70,523.64 in personal purchases made by Goss using subpoenaed business records.

Locke also identified $92,074.48 in additional purchases suspected to be personal in nature, based on the names of the businesses where the purchases were made. The total amount of unauthorized purchases was $162,598.

Some of the confirmed personal purchases listed in the affidavit included payments to Entergy for her electric bills, to AT&T for her cellphone bills, tickets to Arkansas Razorback games, car payments, her personal real estate taxes, hotel gift cards, a diamond bracelet, sequin throw pillows and a tuxedo for her dog.

On Aug. 31, 2016, Moss interviewed Davis, who told him Goss had worked for the county for 11 to12 years before she was terminated and was responsible for ordering and purchasing IT-type equipment for the county, as well as paying various bills. She would purchase the items using the county credit card account number, while the actual card was kept by Mary Culpepper, chief of staff to Davis, who was Goss' immediate supervisor.

Davis said when he was informed by Ashmore about some of the county bills not being paid on time and the outstanding balance on the credit card, he and Culpepper spoke to Goss. After further investigation revealed the personal and unauthorized purchases made by Goss, he contacted Harris and Legislative Audit.

Cathy Gaylene Tankersley, who handles accounts payable for the county, told Moss she was always having a problem with Goss' claims balancing out with the submitted invoices. She said Goss "would always come up with an excuse" and would bring her several claims and "always want her to rush them through due to them being past due."

On Aug. 31, 2016, Moss went to Goss' residence to interview her, but she was not home. He spoke to her on the phone and she agreed to meet with him the next day, but she later told him she had obtained two attorneys, one from Little Rock and one from Hot Springs, and would not speak to him without them. She would not identify the attorneys.

Goss will be sentenced in November. 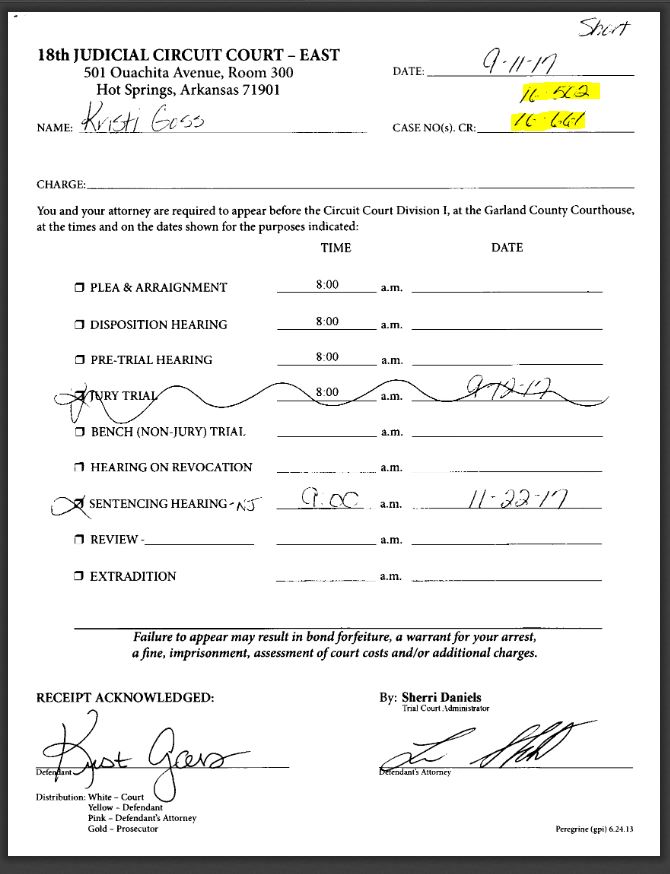 Goss and her husband Don Goss,  were also arrested on drug charges shortly after she left county employment.  They were arrested near the Garland County Courthouse.

In court filings in the drug case, Goss  was found to be indigent. Good luck to the county ever getting any of that $347k back. 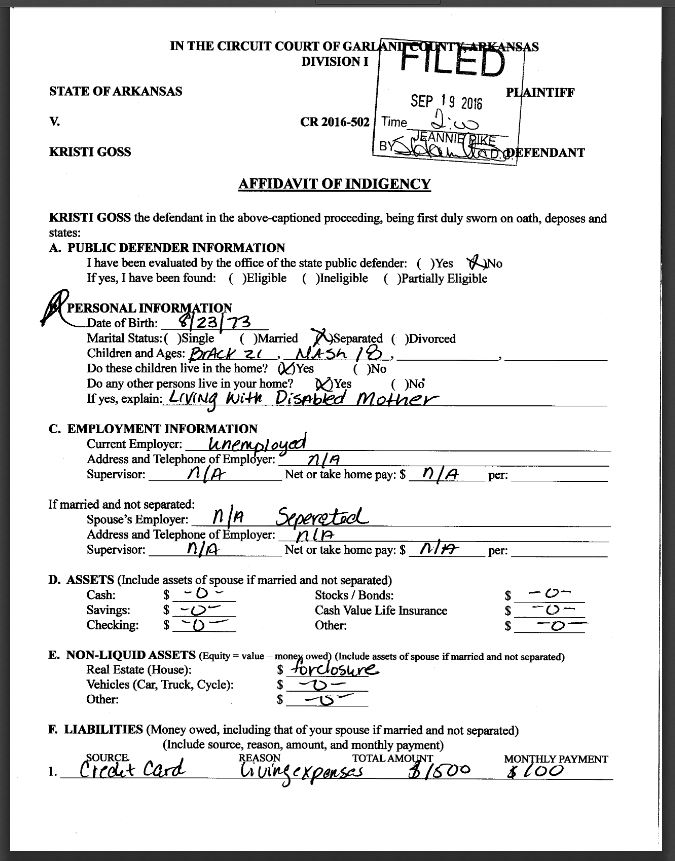 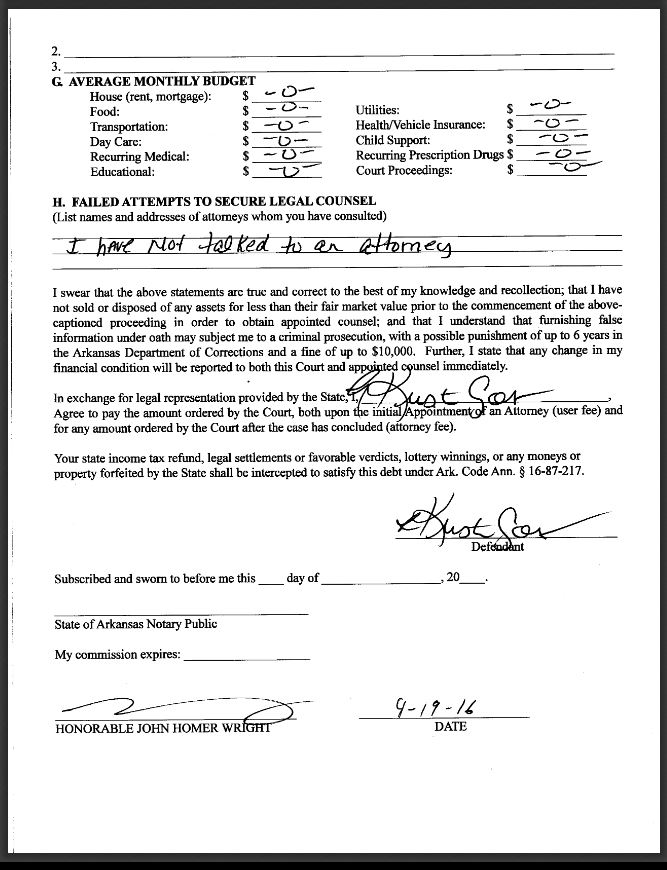 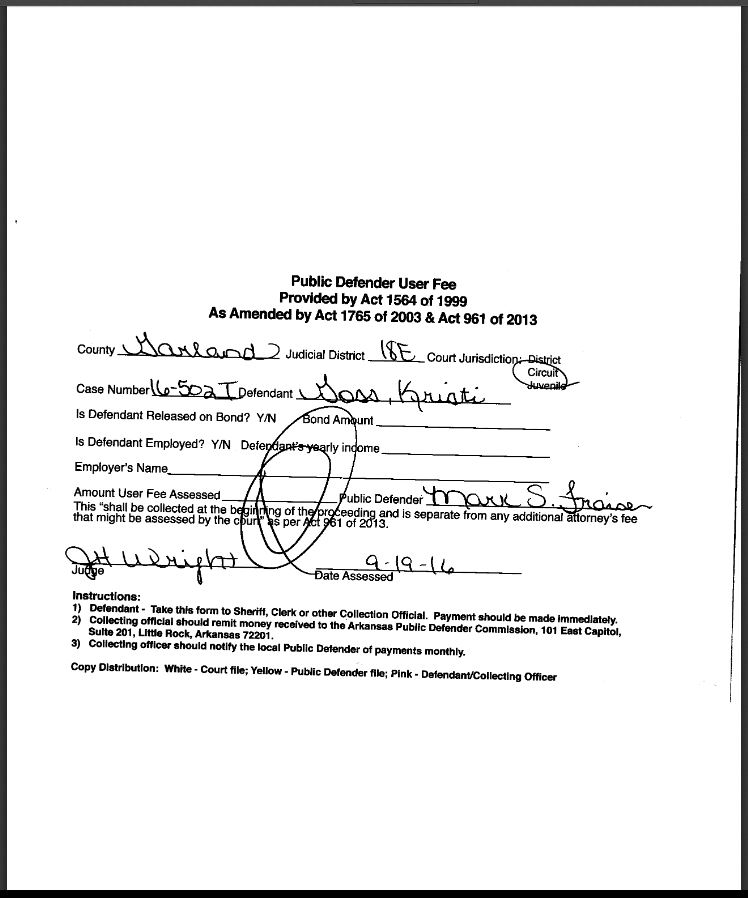