EXECUTIVE ASSISTANT TO GOVERNOR ASA HUTCHINSON HAS QUESTIONABLE PAST

Governor Asa Hutchinson has made several appointments that call his judgement into question. One is Boyce Hamlet as ABC Enforcement Director   and Hamlet's friend and Republican stooge Carlton Saffa is another.

Saffa, a Little Rock insurance broker was active as an unpaid advisor in Hutchinson’s campaign received the position as a pay-off.
However, Saffa was under investigation by the Arkansas Insurance Department for unethical sales procedures at the time Hutchinson appointed him as an advisor for insurance matters with an annual salary of $90,899.95.

Five days after he joined the governor's office, he terminated his contract with Washington National Insurance. He surrendered his insurance license in April 2015, the same month the legal division of the Insurance Department began investigating him.


In an Oct. 16, 2015 letter of reprimand, the department said Carlton Saffa provided confusing and misleading information on the status of old policies, cost of new policies and insurance premium returns.

The department found "suitability issues" -- meaning people were sold insurance unsuitable to their financial means or needs -- and "potential misrepresentation and alleged fraud."

The actions are a violation of the state Trade Practices Act, according to the letter. The act pertains to the insurance business.

Department records obtained through the Arkansas Freedom of Information Act indicate that about 15 complaints had been filed against Saffa since 2012. 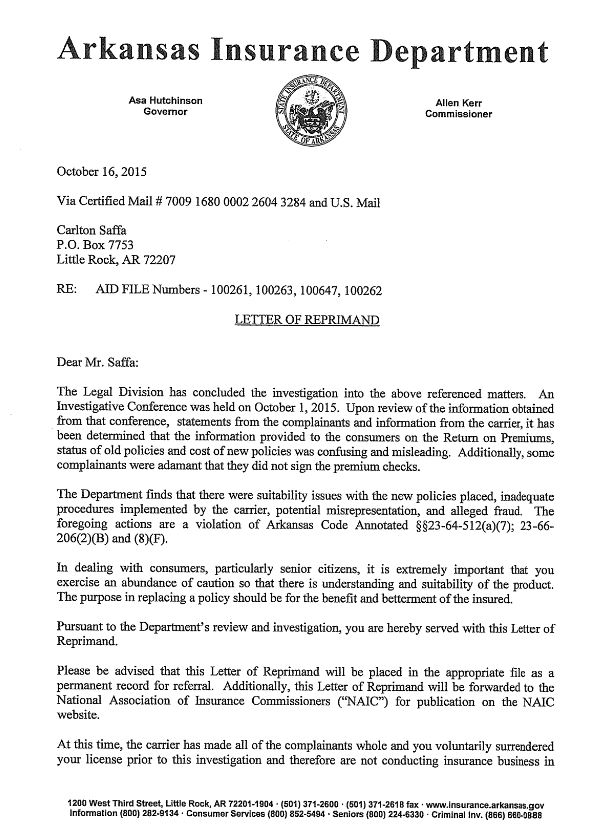 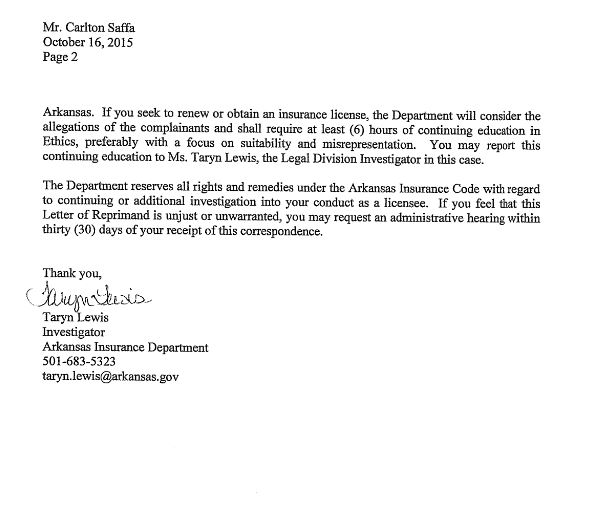 The reprimand states that if Saffa wanted to renew his license, "the Department will consider the allegations of the complaints" and will require six hours of continuing education in ethics, "preferably with a focus on suitability and misrepresentation."

Saffa referred to his work with the department in a transcript of an Oct. 1, 2015 conference in what can be described as an overt threat.

Saffa told Taryn Lewis, an investigator with the Insurance Department, and Suzanne Tipton, a deputy commissioner, "I handle everything you touch, as you all know, you and I are in a lot of meetings together."

As previously mentioned, the Insurance Department was going to revoke his license, as indicated in the transcript:

Suzanne Tipton (deputy commissioner): "We are leaning towards what is possibly revocation instead of a straight surrender of your license, and that's something that you can agree to and do a consent order."

Saffa: "There are ripple effects that can occur on the difference between revocation and reprimand," Saffa said. "I understand I'm being recorded when I say that."


The letter of reprimand was in response to complaints from customers Chorsie Burns, Judy Perkins, Gloria McGuire, and Lou and Herbert Daniels.

Documents also show Saffa was being investigated by Washington National Insurance. It had two open and two closed complaints against Saffa in April 2015 when the state opened its investigation.

The company found Saffa "told the consumer a lie to obtain a higher premium policy," according to an Insurance Department memo.

In another instance investigated by the company, a customer said Saffa canceled her policy without approval. The customer reviewed a signed cancellation form for her account, but it "was not her signature."

When the Arkansas Insurance Department  issued the letter of reprimand, it caused a stink in the governor's office and resulted in a lot of unwanted bad press.  Carlton had been hired to work on insurance related matters for Asa.  Well, Asa couldn't have him do that after the way the mess blew up.

So the governor's office found something else for Carlton to do.  Saffa  was tossed down to lower level concerns and ended up being the liaison for some minor state agencies, like Alcoholic Beverage Control.

But that move caused another problem. That being with his family connections in the liquor industry. So he had to opt out of any matters involving his family and the ABC. 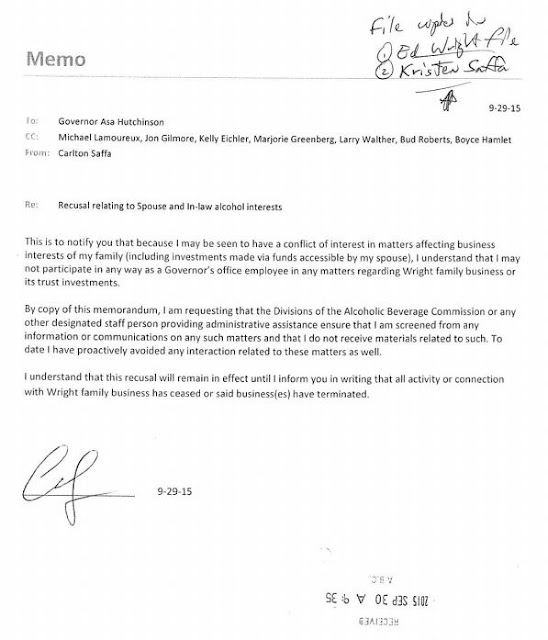 This was not the first time Saffa has been involved in controversy.

When he was a student at the University of Arkansas at Fayeteville, Saffa was almost expelled. Saffa later left the UAF without graduating.

Saffa also was part of a group to get rid of UAF Chancellor John White and had a web site about their activities.

Saffa was represented by the American Civil Liberty Union.  How ironical.

The charges against Saffa and Long were dropped.

Several months later Saffa was still boiling mad and expressed his feelings in an email to a civil liberties student organization: 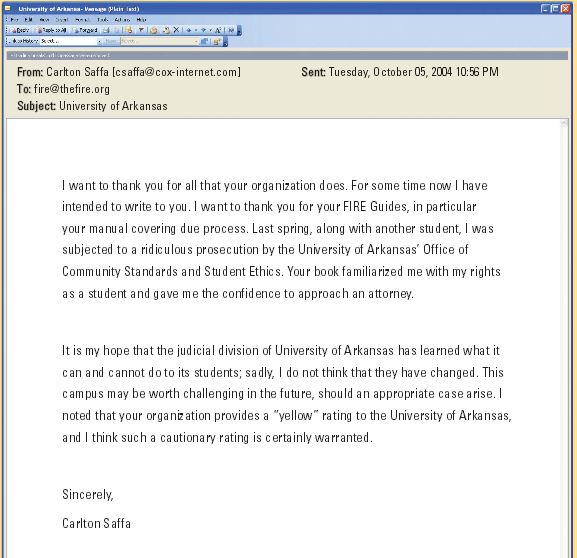 At around the same time, Saffa also attacked Lt. Governor Win Rockefeller in a email blast to thousand of Arkansas Republicans.  Just a precursor to sketchy political activities he would later conduct or be associated with. 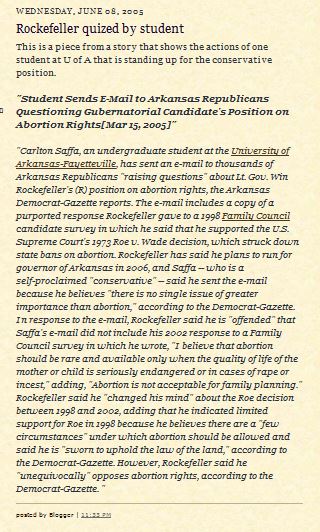 Saffa's employment in the insurance field began when he was still in his 20's, but he has always been involved in political activity too, usually on the shady side.

In 2008 Saffa was listed as a Director for Citizens for Open and Responsive Government. 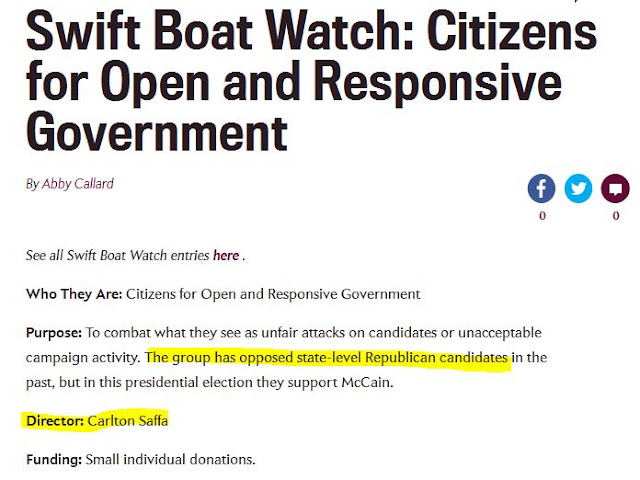 This organization ran political advertisements claiming that John McCain could not use a keyboard or computer because of war injuries sustained in Vietnam. This is in response to the Obama campaign’s " Still " ad, which mocks McCain’s inability to use a computer or send an e-mail. The spot also quotes Joe Biden calling the initial Obama ad "terrible."

Saffa told the reporter that CORG decided to film the ad because it felt the issue was being ignored by the mainstream media. Lt. Col. Mike Fairhead, the veteran in the video, was also injured in the Vietnam War.


Saffa used his post office box in Little Rock, as the registered address for CORG. He also used his cell phone number. 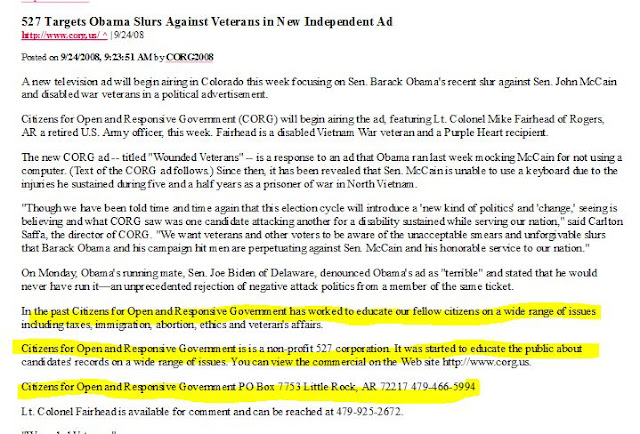 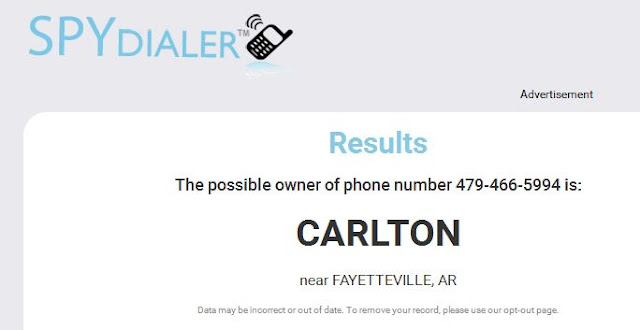 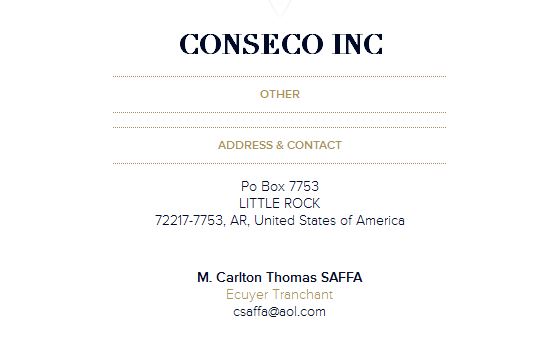 In 2009, Saffa was sued for running up more than a $5,0000 balance on a credit card and refusing to make any payments to the credit card company. 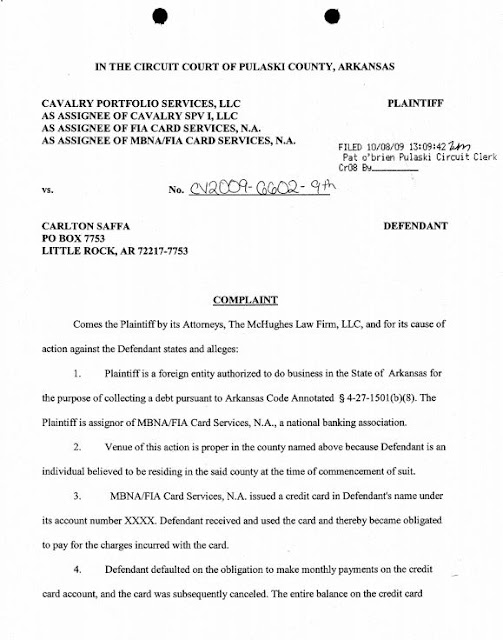 According to documents filed in the lawsuit, the credit card was issued to Saffa on June 15, 2000.  Saffa apparently used the card and made payments. That was until June 2006 when he stopped making payments and would not respond to request for payments.

Hutchison is a poor excuse of an attorney and did a shit job for Saffa, failing to provide answers to discovery, which damaged Saffa's case,  resulting in a $7, 615.00 judgment being obtained against Saffa.

Saffa had a little over $8,000.00 in an account at Regions Bank and the winner of the lawsuit issued a Writ of Garnishment to Regions to collect the judgment. 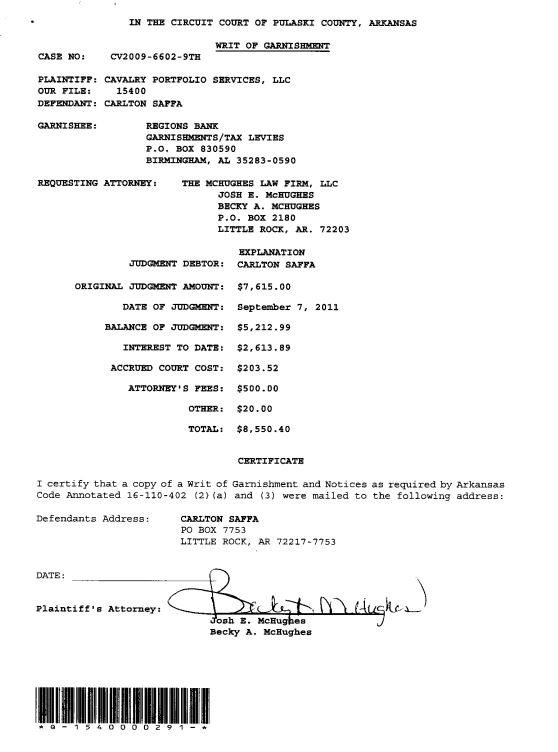 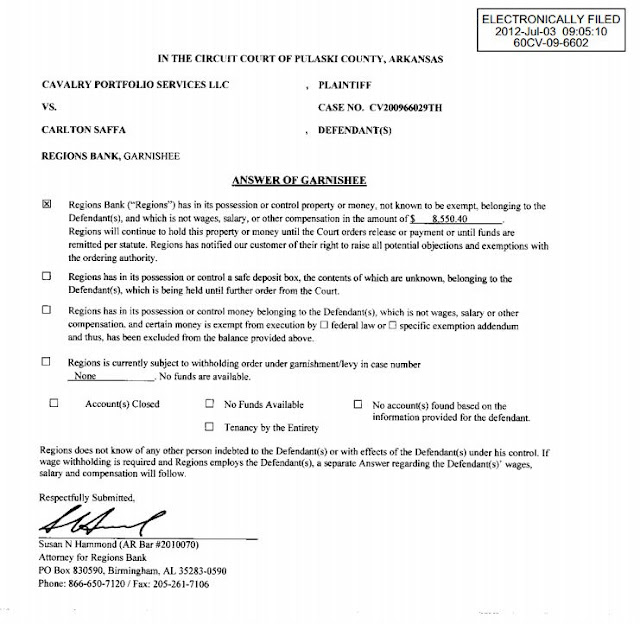 This was not the last time Saffa had problems paying bills.

Saffa and his wife, Kristen, had a lien filed against them by the State of Arkansas in September 2011 for failing to pay state income taxes. 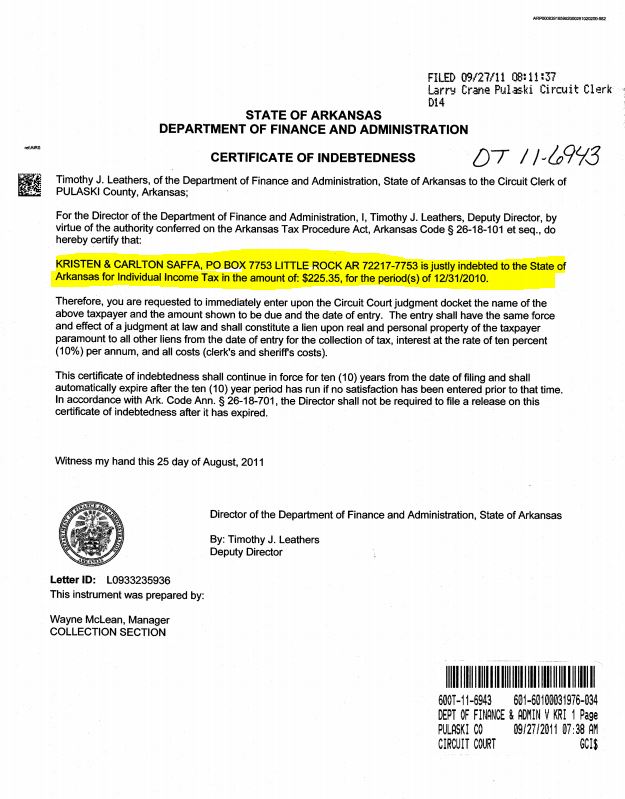 Saffa and his wife filed articles of incorporation in Arkansas and Texas in 2011, but ran afoul in Texas and lost the right to do business there.  We suspect they failed to pay fees there.  Deadbeats. 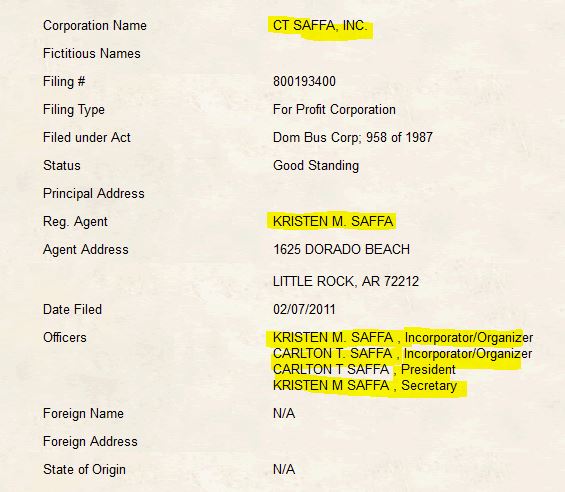 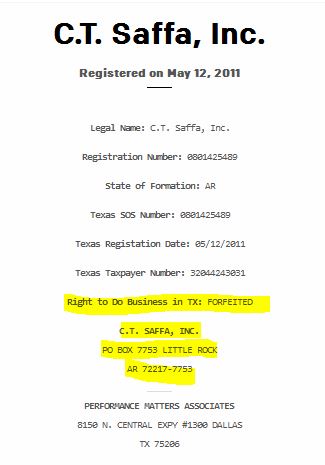 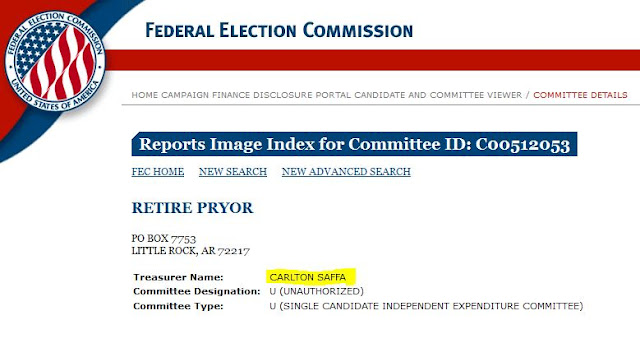 about a perceived tax dodge while never mentioning that he was also a confirmed deadbeat himself. Hypocracy at its finest.

Saffa ran afoul of the the FEC when he failed to file required paperwork repeatedly. 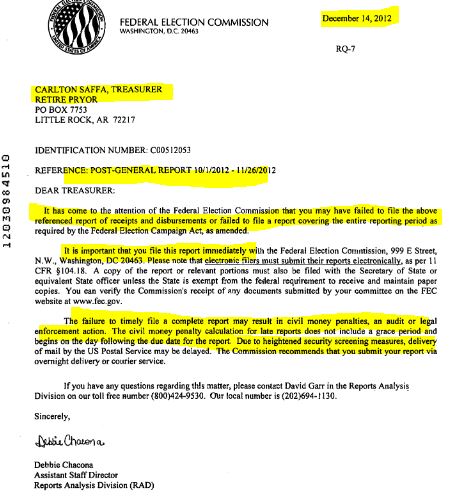 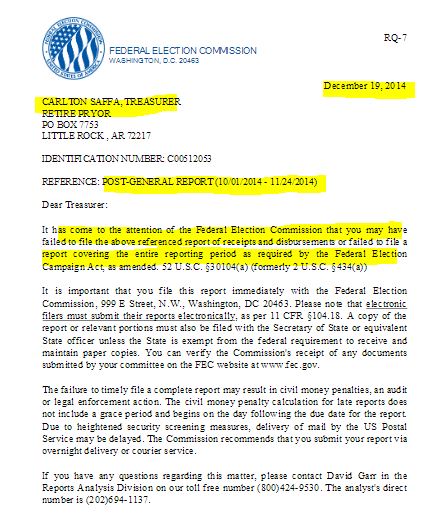 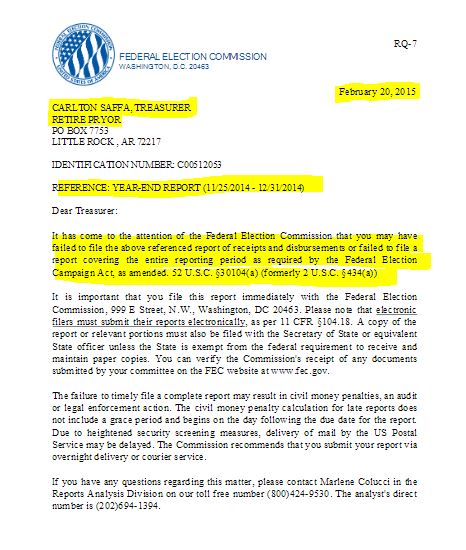 The entire time that Safa was refusing to pay his credit card bill and his state income taxes, his photo was showing up in Soiree at hoity-toity events and he and his wife were even featured in a video.

Saffa was quoted in an article in the New York Times:

Well Carlton is weird, he had his wedding reception at the Clinton Presidential Library! 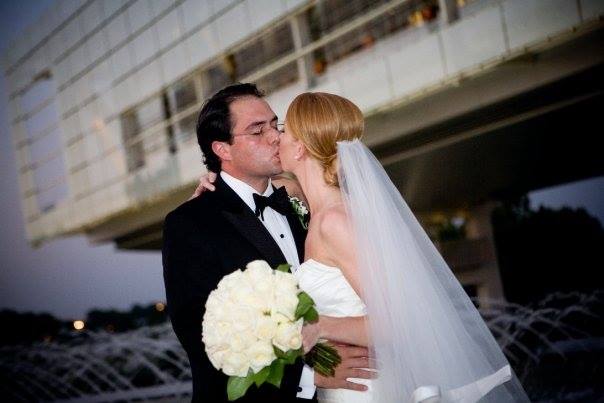 Governor Hutchinson should have done the honorable and ethical thing and dismissed Saffa when the insurance scandal broke.  But Hutchinson has no qualms about keeping trash like Saffa on the public payroll. That speaks volumes about our governor.