Erica Nicole (Lauer) Suskie, targeted and seduced a teenager that was the son of a close personal friend and a student at Little Rock Catholic High School where she was a substitute teacher. Once her crime was exposed, she attacked the teenager, knocking him to the ground.

We will not go into all the details of this case here, instead we are providing a link to records provided to us by the prosecuting attorney.  The black redaction's were made by their office, the ones in red were made by us for items they missed.  You can read what the victim and his parents told police and see some of the evidence for yourself.


Usually  perverse and depraved actions like that would have you handcuffed and hauled off to jail and require a sizable bond posted before you would be released, as happened in other similar cases: 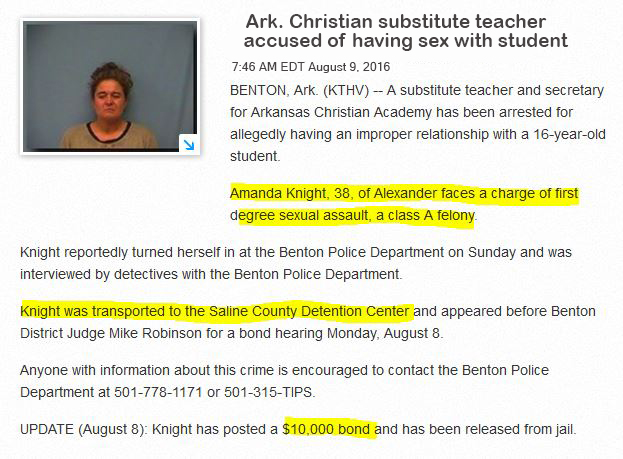 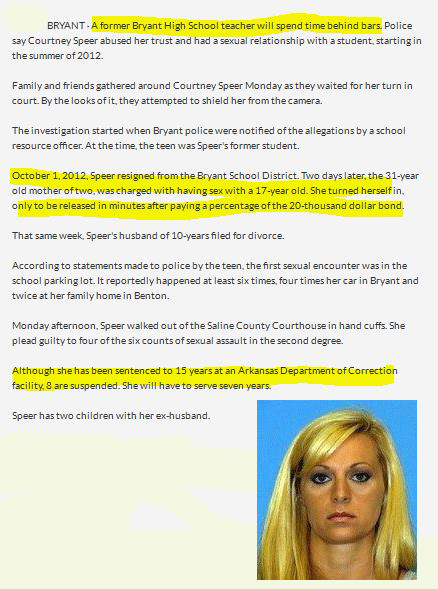 Suskie ran in a failed attempt for the office of Arkansas Attorney General Against Dustin McDaniel (who had his own sexual scandal) in 2006. He had also toyed with the idea for running for Congress. 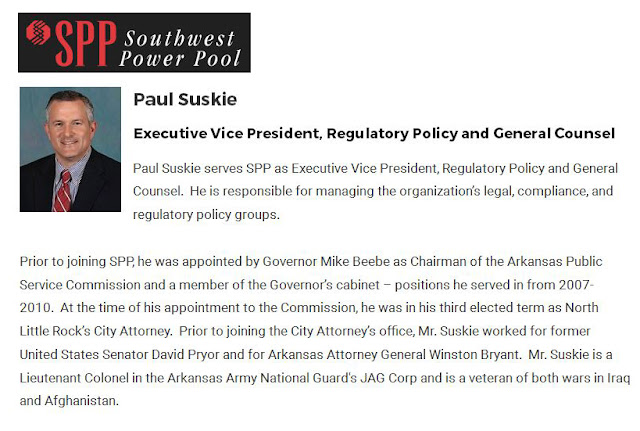 Like other individuals charged with similar offenses, Mrs. Suskie was not placed in handcuffs by the North Little Rock Police and put in the backseat of a patrol car and driven to the Pulaski County Detention Center.  Nor was Mrs. Suskie was  dressed out in orange scrubs, fingerprinted and photographed.  Mrs. Suskie did not have to be processed by jail staff and wait until a bond could be posted for her release.

Why not your ask?  Because she received special treatment due to her social and the political status of her cuckolded husband.  That's why.

The first piece of evidence is that the North Little Rock Police Department did not drive to the Suskie home, without warning, and arrest her and take her into custody after a warrant was issued. Note that the warrant was issued on February 1, 2015. 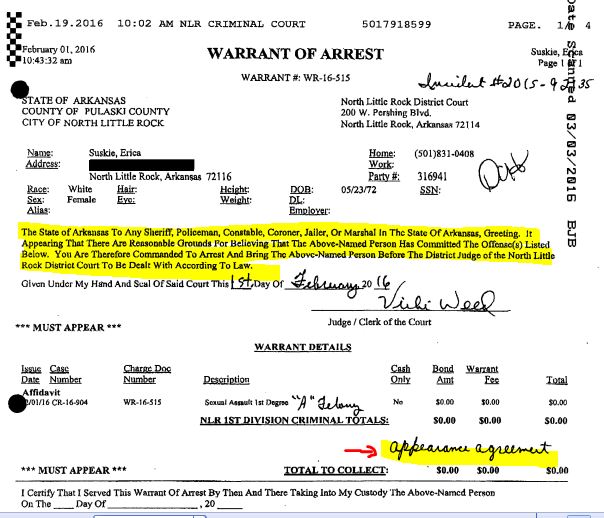 Usually, once a warrant has been issued the police arrest and book the suspect.  The suspect usually has a bond set that is based on the charge(s).

In this matter, someone, either from the prosecutor's office or from the police department called the Suskie's, and made arrangements for Erica to "turn herself in" while appearing before Pulaski County District Judge Jim Hamilton. No bond would be required as they would let her go with an Appearance Agreement.  The charge was a serious felony and this arrangement would have to be approved by the prosecutor and the judge.

There is a connection between the Paul Suskie and Judge Hamilton.

Both Paul and the Judge's son, Nathan, went to Catholic High School in Little Rock.  As the NLR city attorney, Paul had dealings with and cases before Judge Hamilton. Nathan Hamilton is currently employed as the Director of Communication for the City of North Little Rock.  Prior to that he held positions that put him into the same circles with Paul Suskie.

So on February 2nd, a day after the warrant was issued, the Suskie's waltzed smiling into Hamilton's courtroom without a worry. 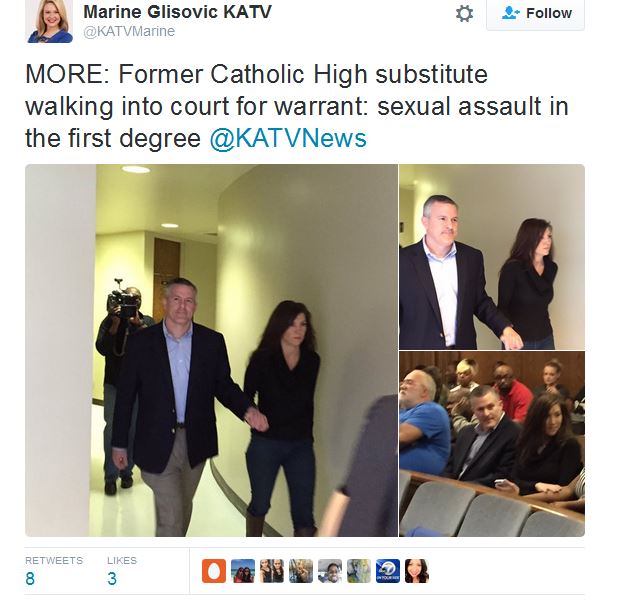 In fact thing were so relaxed and friendly that the court bailiff forgot to have Erica sign the appearance agreement! 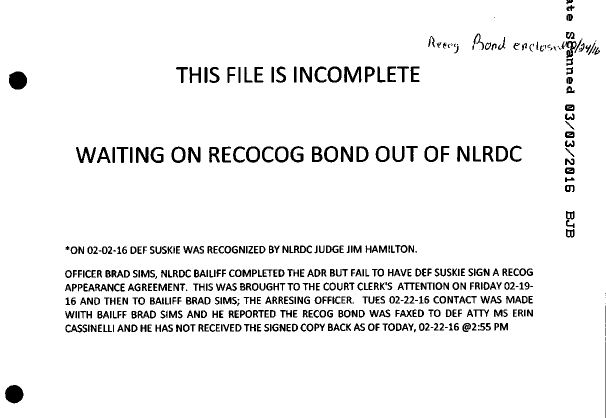 The narrative about the appearance agreement states that it was discovered on February 19th that Erica did not sign the agreement during the hearing on February 1st.  It was faxed to Erica's attorney on February 22nd. 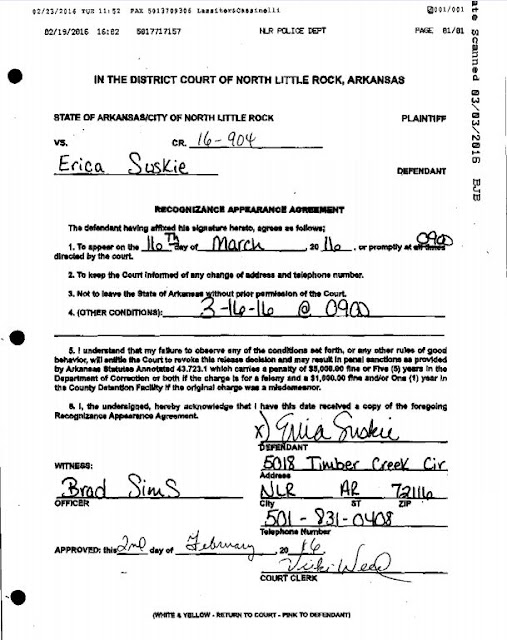 Erica's attorney faxed it back on February 23rd.  Take a close look at the document above.  Do you see anything wrong with it?

We do.  If Erica did not sign it on February 2nd, why did the Court Clerk sign it approving it without her signature on February 2nd?  Was it back dated to cover up the mistake?  If not, why would the clerk pre-sign a document???

Another problem is the document being witnessed by the court bailiff Brad Sims.  The narrative indicates that Sims faxed the document to Erica's attorney for her to get Erica to sign it.

There are serious problems with this document. There are credibility issues with these court employees and in turn with Judge Hamilton as he is responsible for them.

The next cause for concern is when the case gets bumped up to Circuit Court.

It was first assigned to 4th Division and Judge Herbert Wright.  He recused. 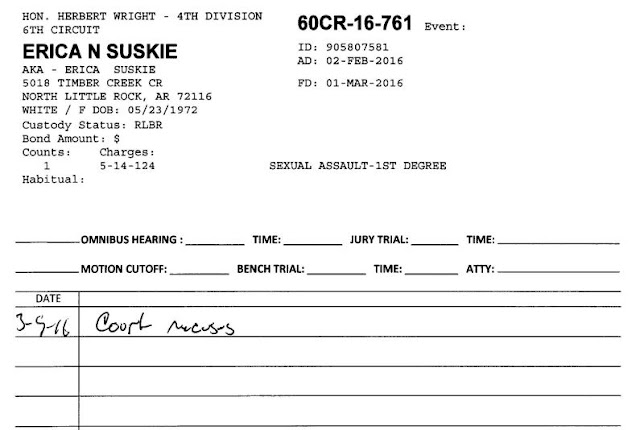 It was then re-assigned to 1st Division and Judge Leon Johnson.  He recused. 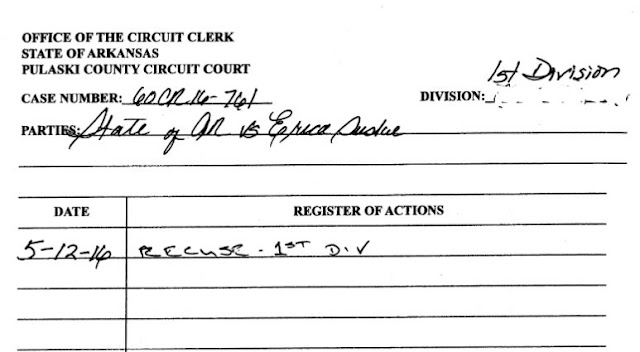 It was then re-assigned to 7th Division and Judge Barry Sims.  He recused. 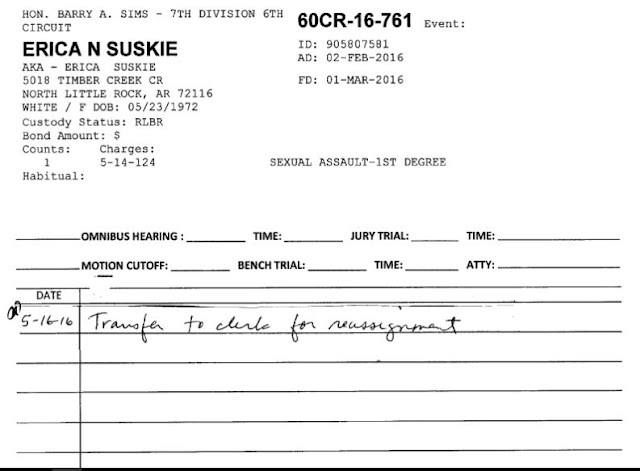 So it ended up in 5th Division and Judge Wendell Griffen.  Did the other judges recuse based on conflicts due to a relationship with the Suskie's?   Did they think that the arrangement that the prosecutor worked out with Eric's attorney to reduce the charge from 1st Degree Sexual Assault (Felony) to Indecent Exposure (Misdemeanor) was unconscionable and wanted no part of it???

What we do know is that Judge Griffen signed off on it with no problem.

And the victim and his family could not talk to the media about the case.

Believe this matter was rigged now?  Sure you do.  Don't take our word, look at page 211 of the prosecution file:


Now ole Judge Griffen catches a lot of heck for the stuff he says and does.  He has a blog that pisses off a lot of people like state Senator Jason Rapert.  That's not necessarily a bad thing. We often share the same point of view on matters as the judge and do not think ill of him. That being said...

Check out a recent post of Judge Griffen:
http://wendelllgriffen.blogspot.com/2016/08/how-god-views-justice.html


It's hard to believe that he can write something like that and then allow what happened in his court to happen.  He should have done what he was elected to do and throw that shitty deal out and dispense real justice.

Perhaps it's time for him to step down from the bench while his legacy remains intact.

We were recently involved in a three year long case in his court involving a Freedom of Information Act request.  The documents we sought were handed over to Judge Griffen for a review.  We prevailed in the case, but Judge Griffen could not produce the documents given to him for review.  These were the only copies and they could not be reproduced due to the passage of time.
We stated that we would not go into all the details of this case here and provided links to documents that provide clear and convincing evidence of Erica's Suskie's guilt, far beyond a reasonable doubt, but we have to share this with you...

When Paul Suskie found out about the rumors and allegations, he meets with David Rahbany (father of the victim - and we will refer to the victim in this post as RB for Rahbany Boy) and after seeing text messages and a photo Erica sent RB he calls his wife a "fucking bitch" and states he is "going to divorce her" (see page 197).

Then he does an about face and tells David Rahbany that the age of consent in Arkansas is 16 (see page 199 of prosecution file).  Shit move Suskie.  Guess you won't have problems with a much older married man bending your daughter over when she is 16 huh? After all 16 is the legal age of consent right?

Well he didn't divorce Erica.  What he did do was beg David to not go public with what his wife had done because it would ruin him and hurt his career (see pages 198, 202 and 261 of the prosecution file).

He also tried to fix it so he and his wife would be insulated in the event the Rahbany's sued them and obtained a judgement. 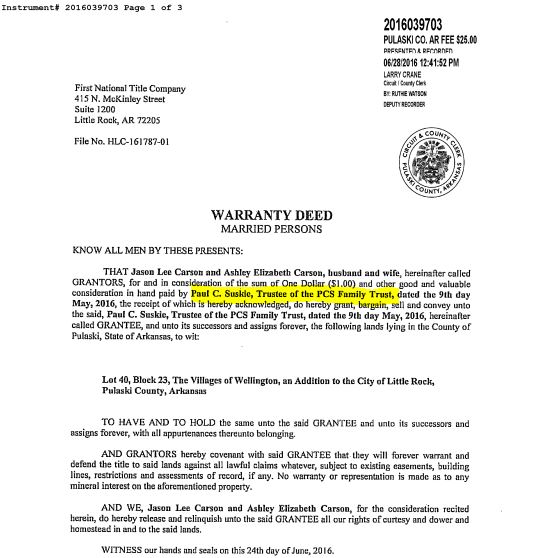 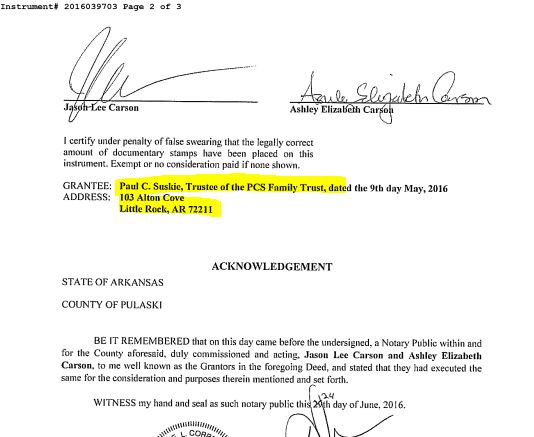 The Suskie's also changed the ownership of their double-wide trailer/ lake house in the Mountain Harbor area on Lake Ouachita  to the PCS Family Trust.  One of those shyster tricks to try and protect property from lawsuits or seizure relating to a judgement. 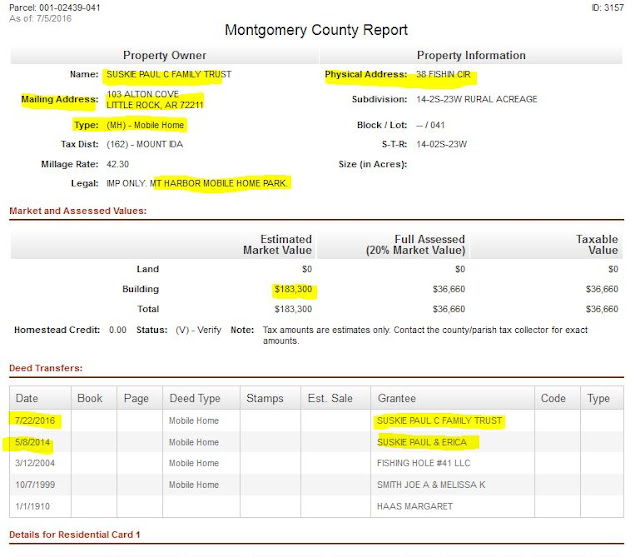 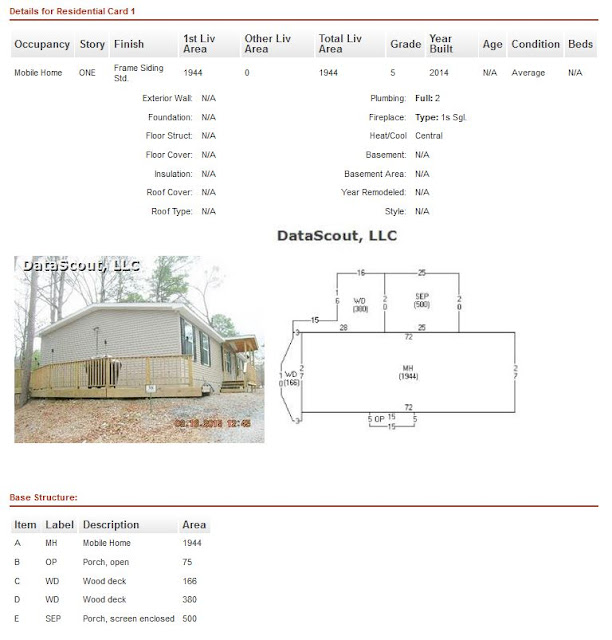 Erica Suskie deserves to serve some time in prison for her crime as punishment.  Having her name on the Department of Human Services Child Maltreatment Registry,  which is not made public, is not justice. Being listed as a sex offender and not having that information in a public database, where it is available to the general public,  is not justice.

The Rahbany's winning the lawsuit that they have filed against her and obtaining a hefty monetary against her and then collecting it would be a step in the right direction.

A final injustice is that Erica Suskie may be able to have her court record sealed and her record expunged as she is a first time offender. However, this blog, other sites and the internet will keep a record of her crime out there forever.

The lesson here dear friends is that the system works.. it especially works for you if you are privileged and connected.