Yesterday, our publisher made a quick trip to Home Depot in West Little Rock. He noticed a car parked in a handicapped parking space that had "Fults for Senate" magnetic signs on both driver and passenger doors.  The car, a small Hyundia sedan, did have a blue handicapped hang tag hanging on the rear view mirror, but was parked in a spot designated for vehicles that have an additional sticker on the license plate, the one that allows you to park in a van accessible handicapped parking space. 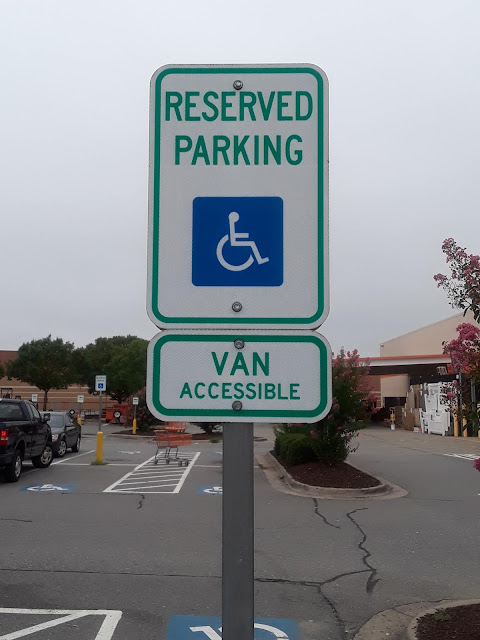 To park in a space like this, your vehicle must display the Van Accessible sticker on the license plate.

This is what the sticker looks like. This one is on the vehicle of our publisher's mother, who uses a mobility device and can legally park in a space like the one the Fults' illegally parked in on Sunday morning.

Fluts' vehicle had no such sticker. That is a violation of Arkansas Code Annotated 25-15-315. 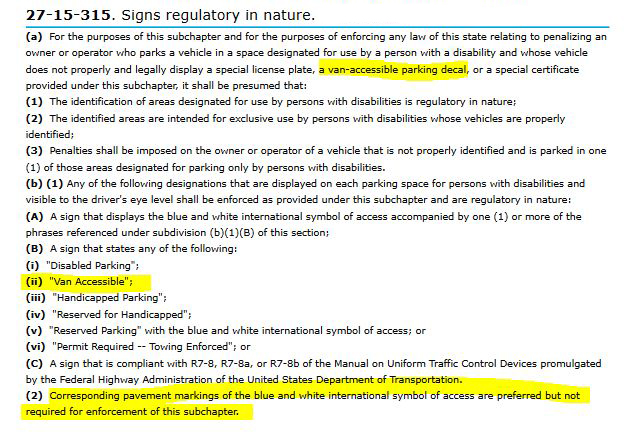 To get a sticker to park in a spot marked van accessible, your doctor has to sign this form: 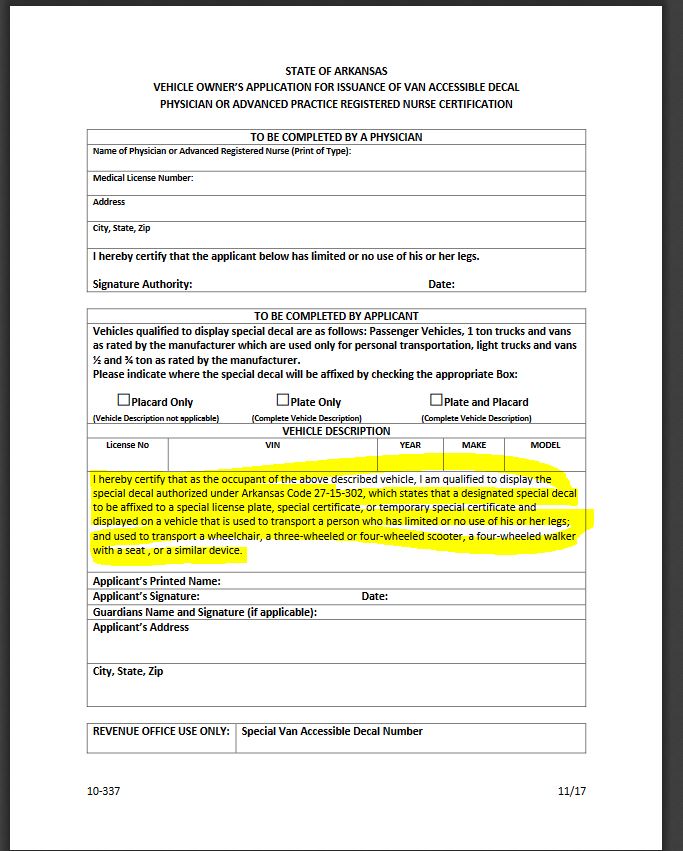 Our publisher did not observe either candidate Fults or her hubby using a mobility device.

Oddly enough, the bill that became this law was sponsored by Rep. Andy Mayberry who soundly defeated Fults back in 2016.

Maybe she ignores the law because she is still butthurt over her lose to to Mayberry, or she doesn't think the law applies to her or her husband.

This is from a press release issued by the Arkansas Department of Finance and Administration back on November 8, 2017.

According to DFA spokesman Scott Hardin, whose agency handles complaints about folks illegally parking in handicapped space like the Fults' did, if a complaint was/is filed about Fults parking in the van accessible spot without the corresponding sticker, a letter would be sent to her or her husband advising them of the law. 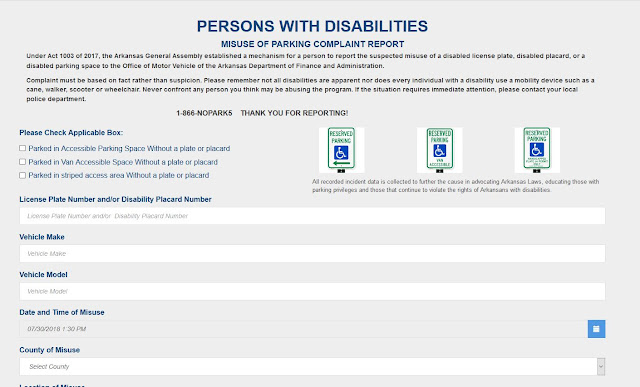 You can report misuse of handicapped parking by clicking here.

Harding also stated that if multiple reports come in where a vehicle is repeatably reported committing the same violation, DFA will call the appropriate police agency and have the immediately go and try and ticket the vehicle.

Our publisher posted about this incident on our Facebook page yesterday. 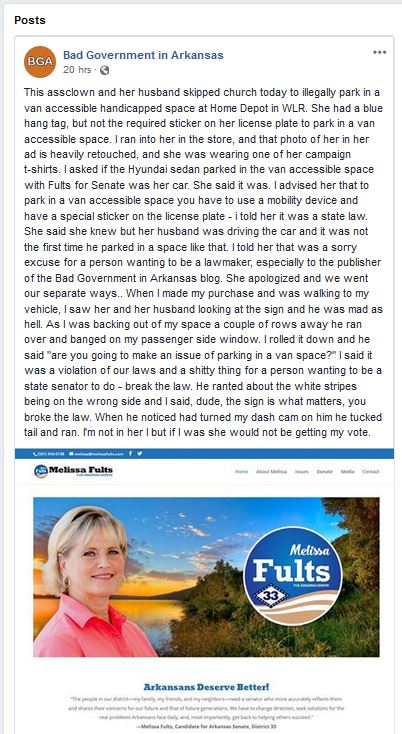 A friend of ours sent a message that Fults sent him via Facebook messenger.

That is a lie.

We spoke with that manager, whose name is Ahmad, and he told us that Mr. Fultz came back into the store all pissed off and asked to speak with a manager. Mr. Fultz was ranting about the sign and stripes being in the wrong place.

Ahmad said that he told Gary Fultz that they were not incorrectly placed, but were exactly where they were supposed to be.

Ahmad told us that Mr. Fultz could not grasp the concept. We are not surprised after having contact with him ourselves.

Ahmad explained that the spaces are set up so that folks that have vehicles like these can utilize those spaces. 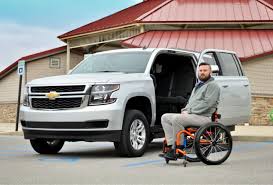 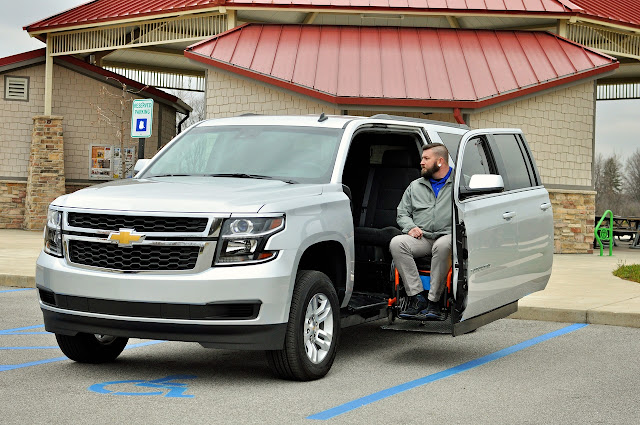 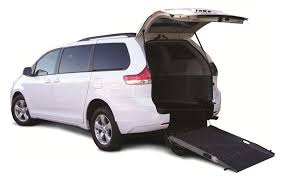 Ahmad went on to explain that the stripes are set up to give vehicles that have mobility devices that enter and leave the vehicle on either the right or left hand sides an area to get in or out of the vehicle. 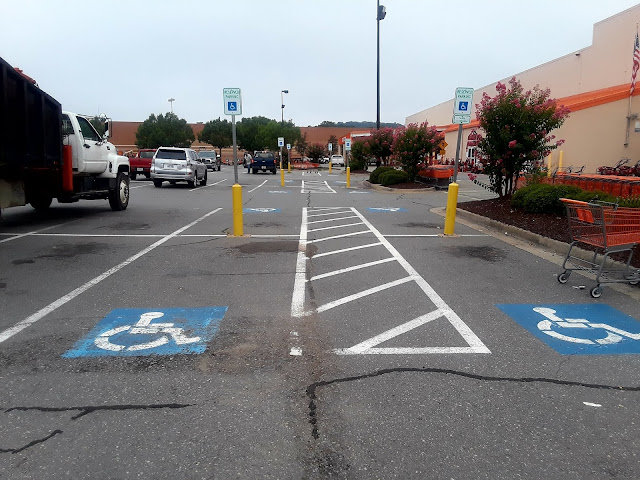 That is what Gary Fultz could not grasp. And as previously mentioned we are not surprised.

Ahmad said the signs would not be moved as they were in their proper place already and that never told Mr. Fultz that they would be moved.

Candidate Fults ignored that she and her husband were illegally parked tried to spin the situation saying that her hubby pulled way over to the right.

He could have parked halfway up on the berm and he would have still been parking illegally in a spot that required a sticker to indicate that a doctor certified that someone in the vehicle used a mobility device and could get a sticker to park in a van accessible spot.

Arkansas does not need anymore legislators that think that they are above the law.

Fults falls into that category. 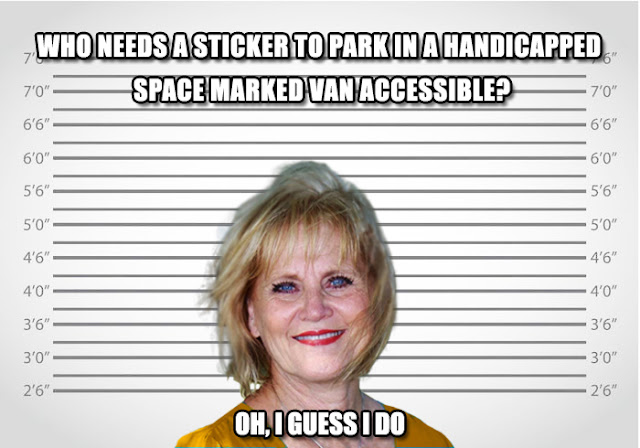