STATE MEDICAL BOARD UNABLE TO ANSWER QUESTIONS ABOUT WHY THEY ALLOWED AND CONTINUE TO ALLOW DR. JAMES MERLIN HAWK TO PRACTICE IN ARKANSAS - A DOCTOR THAT THE STATE OF CALIFORNIA QUESTIONED HIS ABILTY TO PRACTICE MEDICINE DUE TO MENTAL ILLNESS

On April 26, 1999, the Medical Board of California found that Dr. James Merlin Hawk was so impaired by mental illness that he could only retain his license by agreeing to be on probation for 15 years and be under the supervision of a psychiatrist and undergo therapy and take medication. 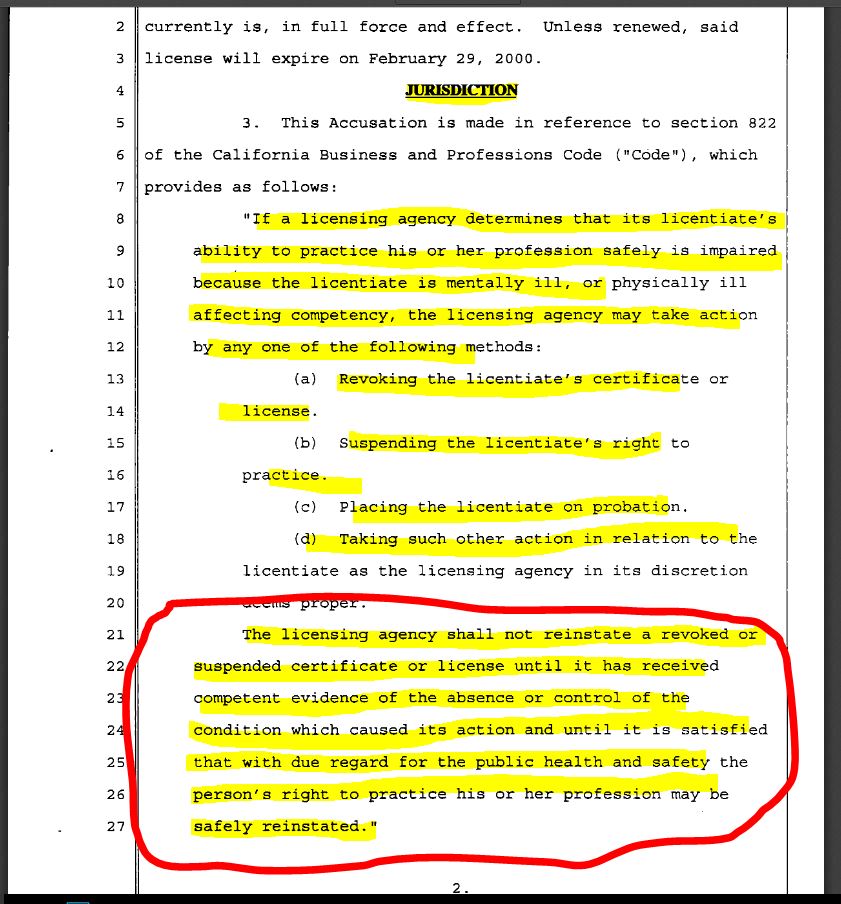 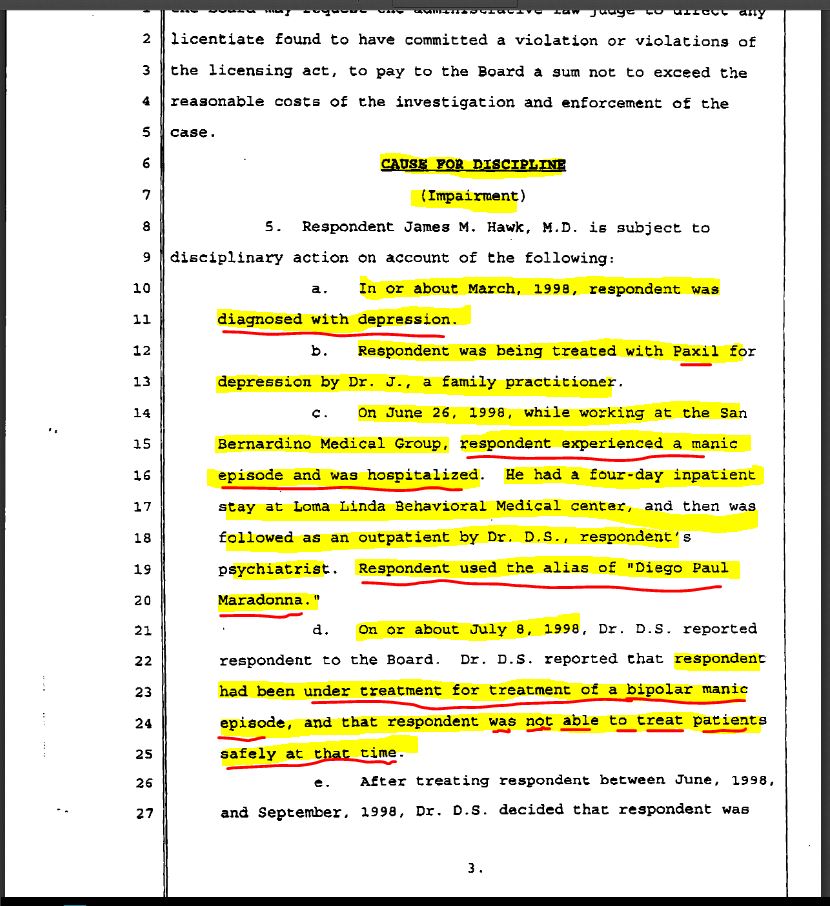 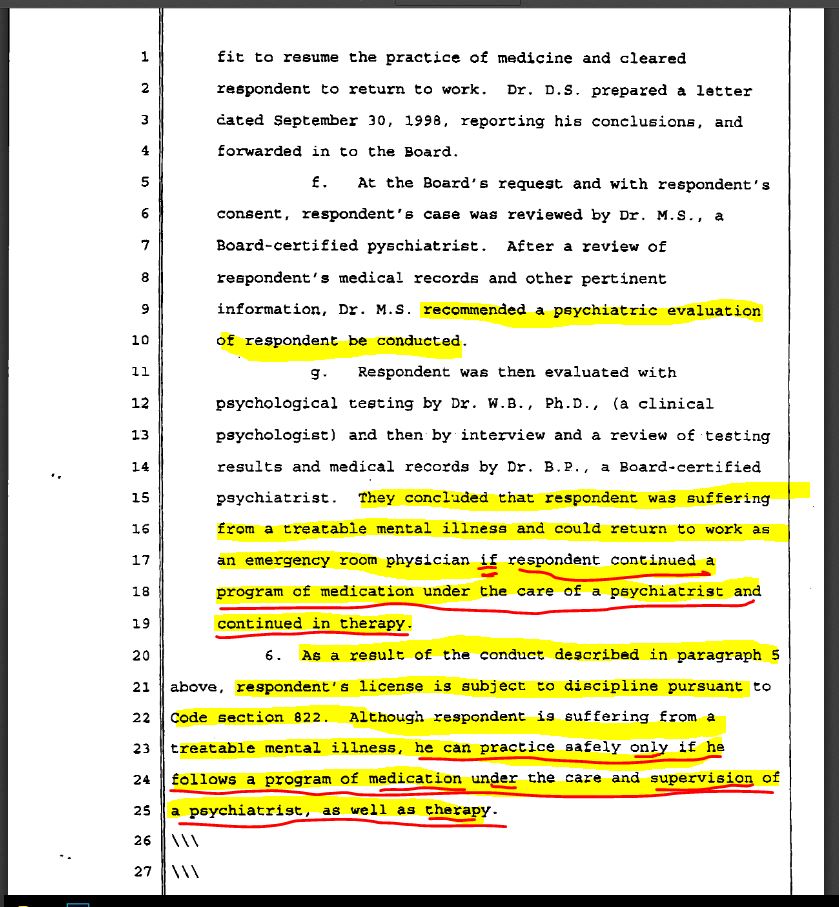 To try and get out from under the "death sentence" in California, less that a year later he moved to Harrison, Arkansas and was approved to practice medicine by the Arkansas State Medical Board.

In a letter to the Medical Board of California dated May 31, 2000, Hawk surrendered his California medical license but kept his DEA certificate, a fact is important later on in this post. 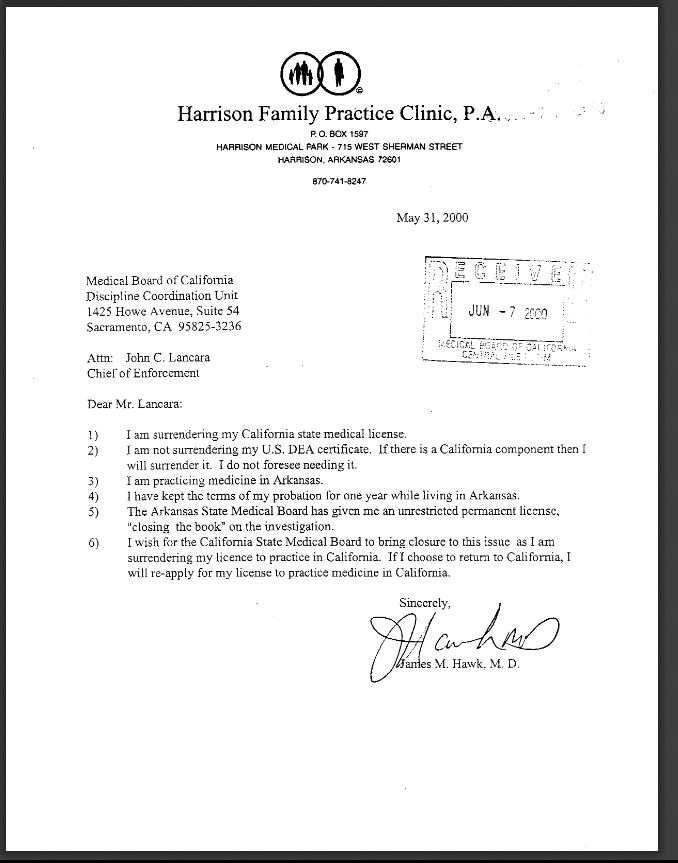 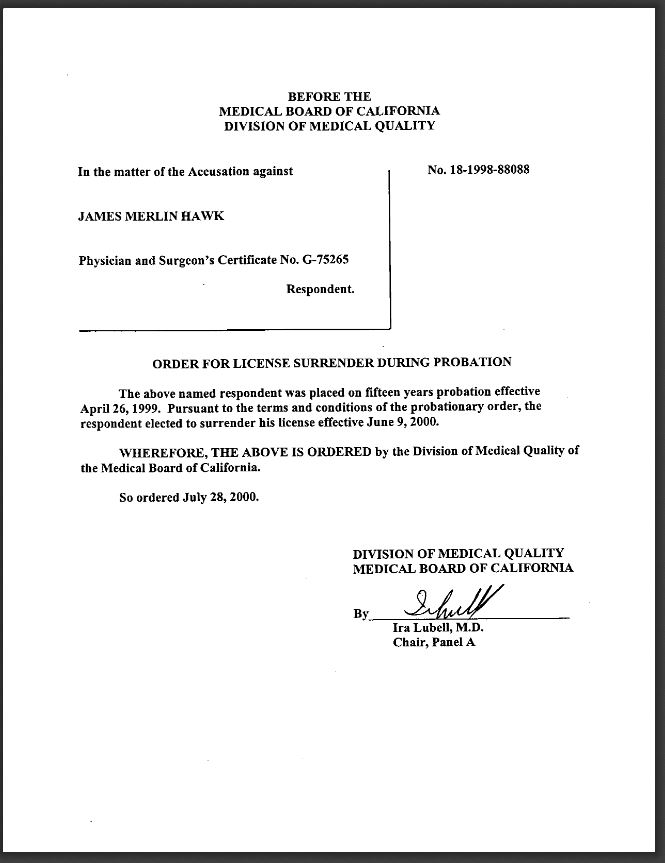 Hawk lied to the Medical Board of California in his letter when he stated that Arkansas had granted him an unrestricted permanent license to practice medicine.

Arkansas granted him a license to practice on April 28, 2000 but it would expire on February 28, 2019.  Hardly a permanent license. 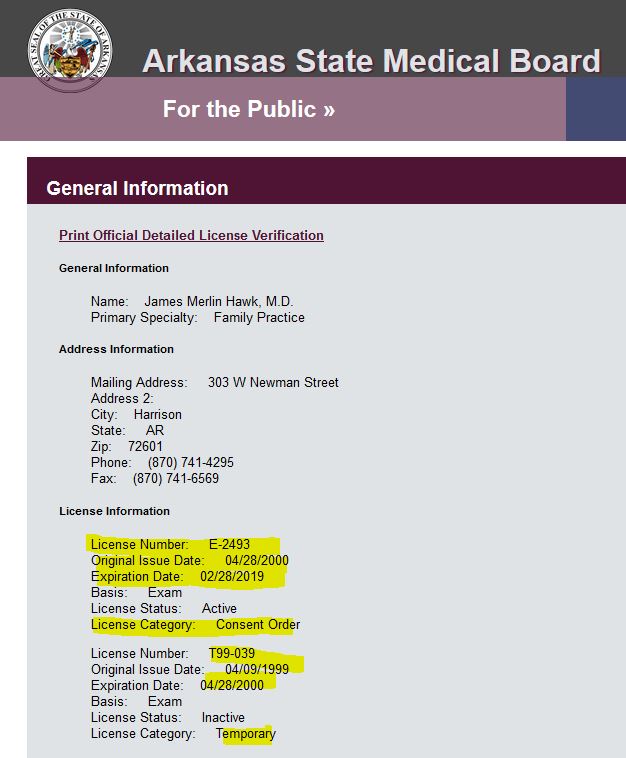 Why the Arkansas State Medical Board did not require Hawk to follow the same conditions that California felt were necessary for him to be able to practice medicine due to his severe mental illness is unfathomable.

Hawk ran into some trouble with the authorities over prescriptions, and he blamed employees. Folks in Harrison knew better, they believed that the employees took the fall for him. 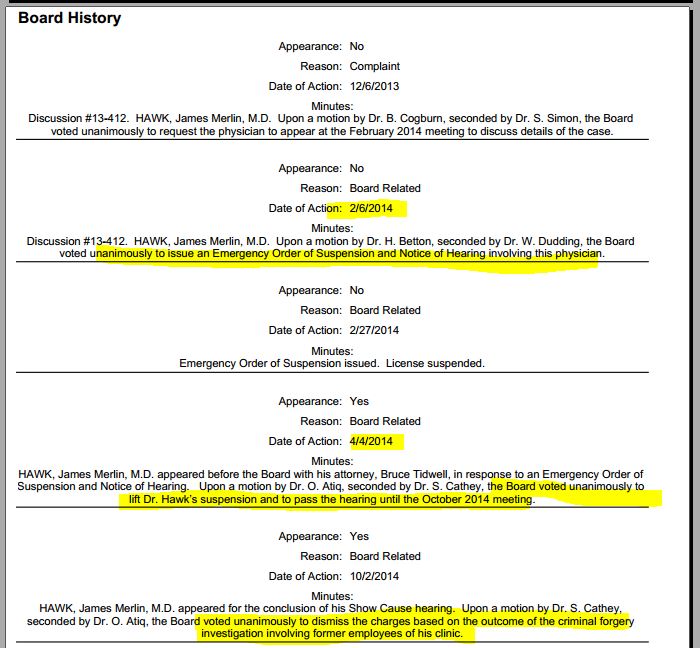 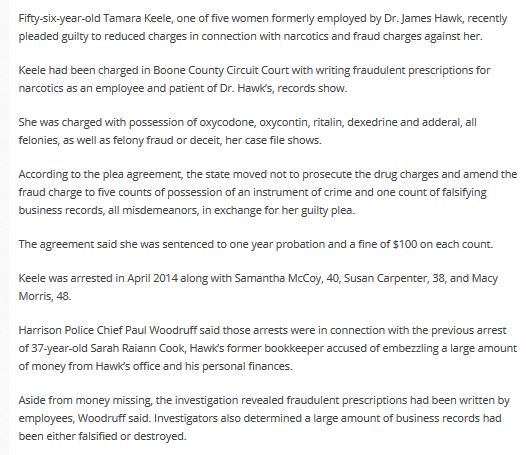 The folks in Harrison believed that the fix was in and that Hawk was being protected - corruption in the police department and in the prosecutors office was suspected (more about that in a future post).

Hawk still had issues with prescriptions, to the point that the Arkansas Medical Board required some classes and monitoring - this added credence to the belief of Harrison residents and others that Hawk had his former employees and partners crime were supplying drug dealers with prescriptions. 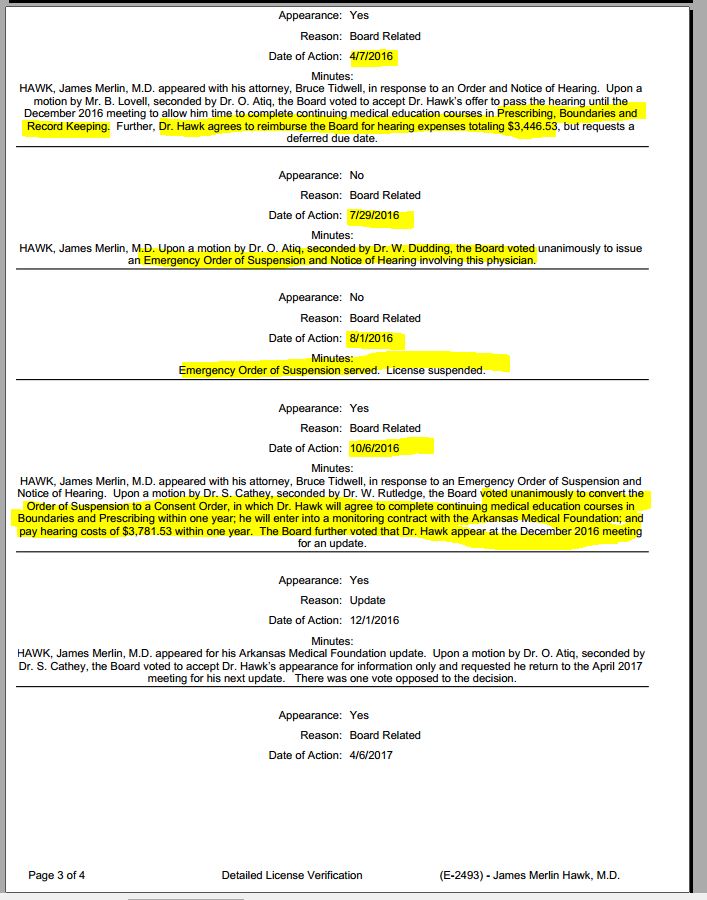 It appears that it is all about the money, as Hawk agreed to pay a $3k fine to the Arkansas Medical Board and continue practicing medicine.

Hawk continued to have problems with prescriptions - no doubt the over prescribing of certain controlled substances and the Arkansas Medical Board required additional monitoring and POLYGRAPH testing. 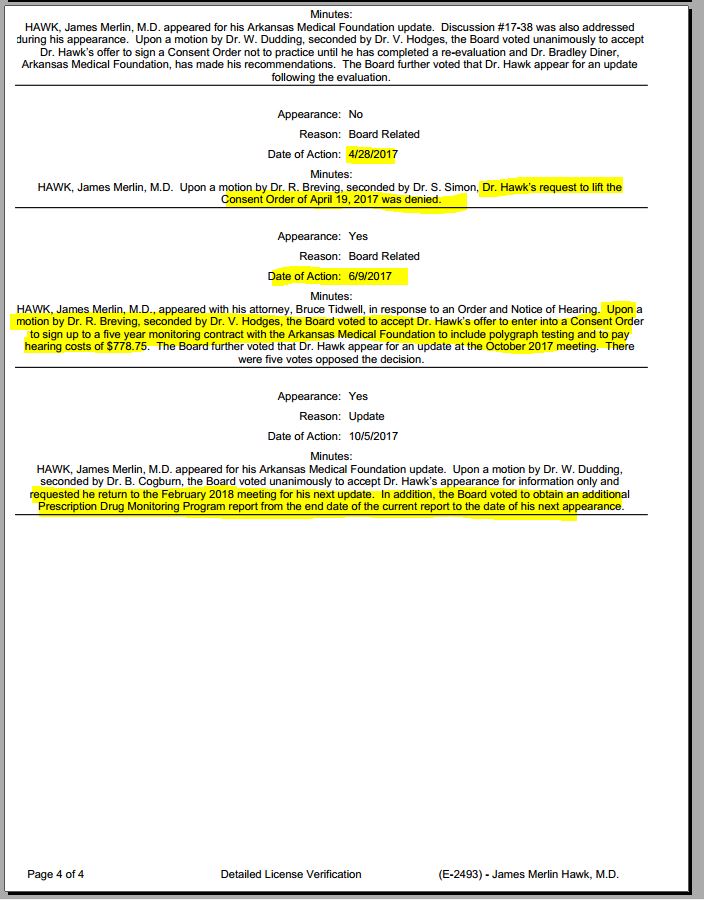 It does not take much common sense, let alone a medical degree to know that Hawk needs to be booted out of the medical profession and not allowed to operate his sketchy drug supplying business to drug dealing individuals in the state of Arkansas.

Why the Arkansas Medical Board allowed this POS to practice in the state is a question the must be answered.

Perhaps out FOI request to for them their file on Hawk will provide some details. 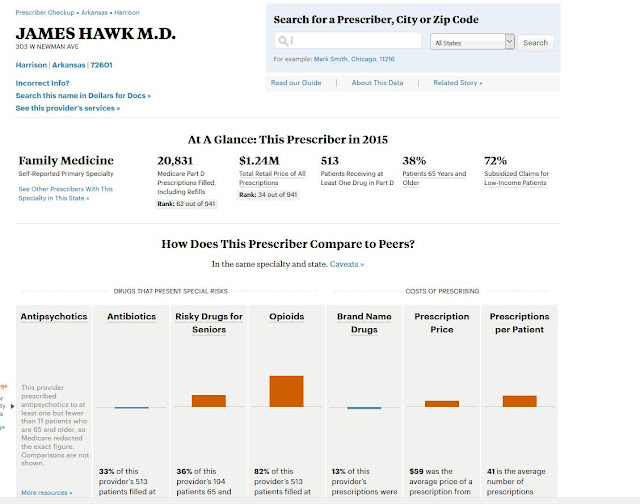 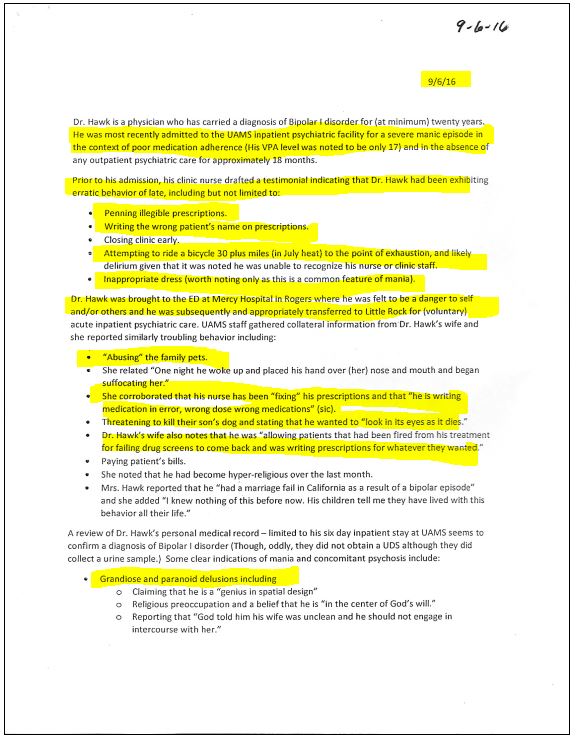 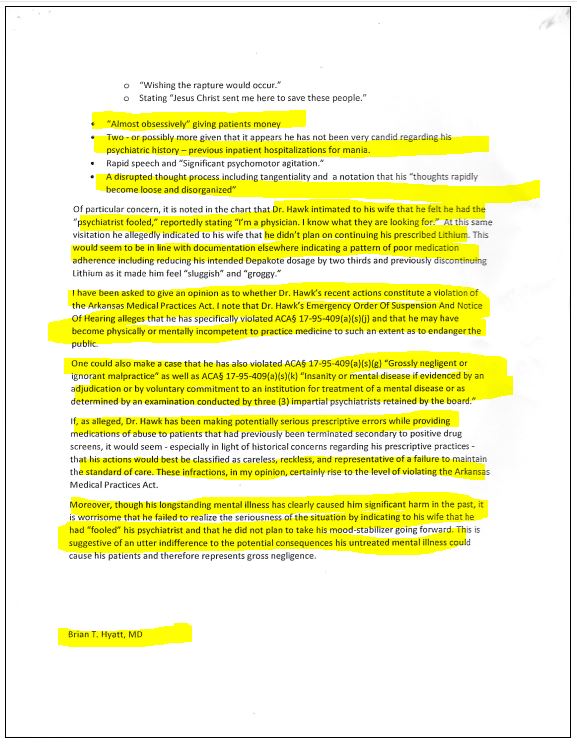 We question to actions of the Arkansas State Medical Board in permitting Hawk to endanger others by continuing to practice medicine in our state. 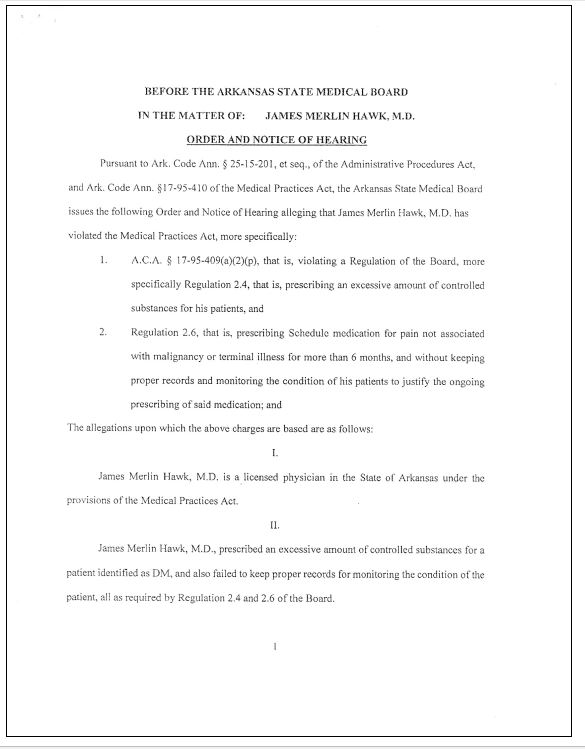 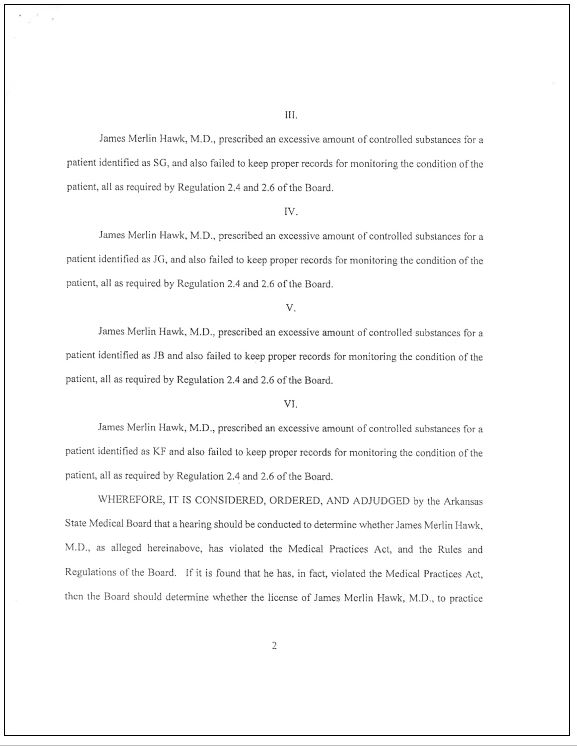 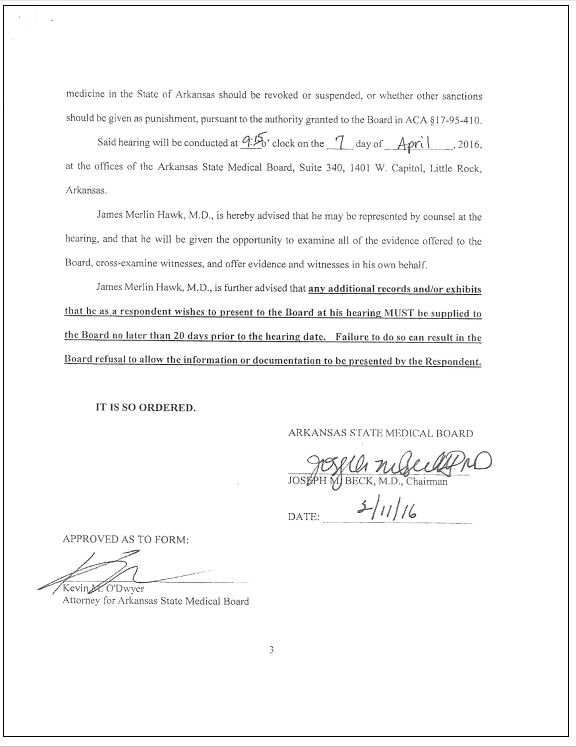 This is the short recording uploaded to YouTube of Maggie Hall (Hawk’s bookkeeper), Jimmy Elliot, and Kim Hawk (Hawk's wife) in the background.  The person referred to as Joe is allegedly Joe Jester, a former Pharmaceutical sales representative.

The State Medical Board is rated among one the the worst in the county concerning transparency. 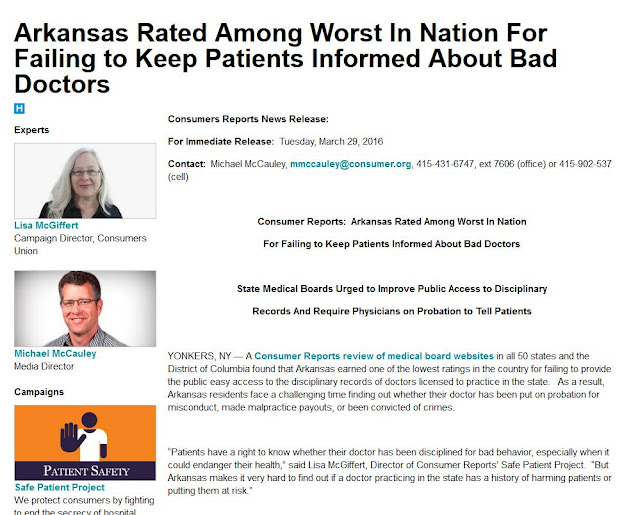