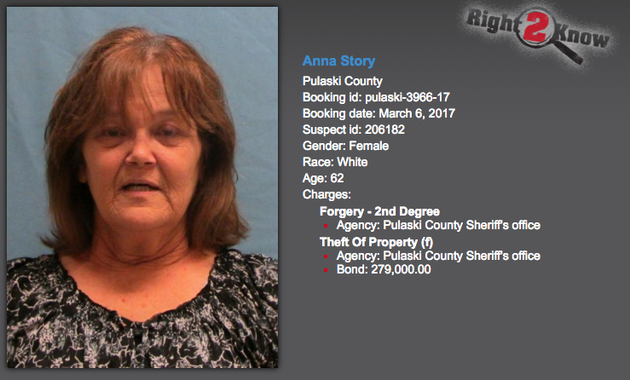 Anna Story, who will shortly be a former employee of the Pulaski County jail, was arrested Monday on accusations she stole thousands of dollars from inmate accounts, authorities said.

She was booked into the Pulaski County Jail where she's worked for more than eight years Monday March 6th and released the next morning after posting bail.


Pulaski County sheriff's office spokesman Lt. Cody Burk said inmates are issued checks for money remaining in their accounts when they are discharged. If those funds aren't claimed within 90 days, the money goes back into the jail's account.

That process seems to be illegal conversion or theft of mislaid property by the Pulaski County Sheriff's Department. These unclaimed funds should be deposited into a escrow type account and if not claimed be subsequently turned over to the Arkansas State Auditor as unclaimed property.

That will be something to remember the next time a Sheriff is to be elected in Pulaski County.

"She was taking that money at that point," Burk said.


Burk said Story has been placed on administrative leave without pay.

Story's scheme came to light on February 2, 2017, when Pulaski County Sheriff's Office investigators were informed about money missing from a previous inmate's account. During their investigation of the jail's Inmate Finance Unit, they discovered the county's computer system was accessed and used to print 66 checks between the dates of April 12, 2016, to February 14, 2017, in various inmates' names. They discovered that the total amount taken by Story was $18,228.12.