The Arkansas Ethics Commission has found that Circuit Judge Susan Weaver violated the law by failing to note that her campaign paid for an ad in the Faulkner County Lifestyle magazine in May 2018. 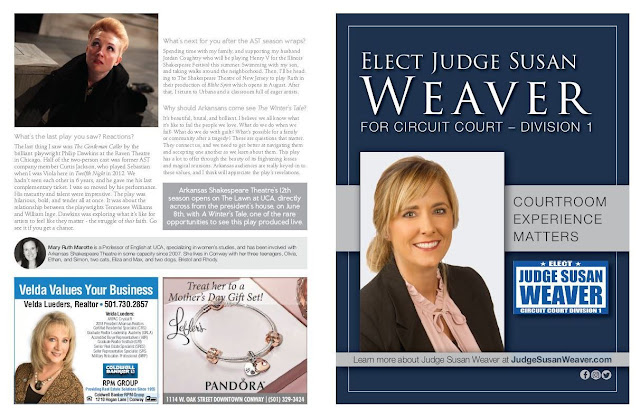 However, the Commission declined to sanction Weaver based on good cause. Weaver and Lori Quinn, a co-owner of the magazine, testified that the campaign asked in an email for the magazine to correct the ad before publication to specify who paid for it, but the magazine didn't do so.

Quinn, testified that she agreed with the affidavit of Brandy Strain-Dayer, the other co-owner.

"This particular ad was sent to proof and we missed an email they replied it was not correct and we just missed it," Quinn said.

Perhaps a complaint should have been filed against Quinn and her rag for not following the law.

Weaver is a former district judge for Faulkner and Van Buren counties who narrowly defeated Andrea Woods, corporate counsel and executive president of Nabholz Construction, for the Division 1 position in the 20th Judicial Circuit in May 2018. That particular judicial district has a history of being one, if not the most, corrupt district s in the entire state.

Woods filed a citizens complaint against Weaver that led to an investigation by the Commission.

Woods also ran an ad in that issue and it contained the statutory wording. 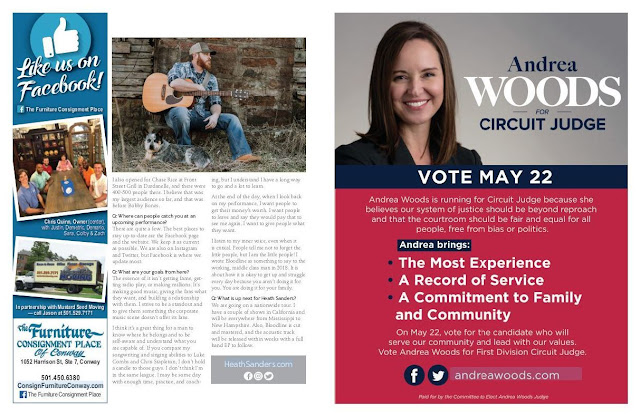 Three commissioners, Sybil Jordan Hampton, Lori Klein and Ashley Driver Younger, voted to approve a motion to find that Weaver violated state law, but not to sanction her for it. Chairman Tony Juneau of Rogers voted against the motion.

Under state law, the commission may sanction ethics law violators with a letter of caution, reprimand or warning and/or fines ranging from $50 to $2,000 per violation.

The commission also voted 4-0 to deny Weaver's motion to declare the laws under which the commission operates to be unconstitutional.

We will be keeping a watchful eye on this scofflaw of a judge.

Weaver's attorney, Jeff Rosenzweig, told the commission, "We may wish to appeal on the question of constitutionality and whether a violation was found at all."


Under Arkansas Code Annotated 7-6-228, campaign signs, literature and other printed materials must clearly contain the words "Paid for by" followed by the name of the candidate, committee or person who paid for the material.

Good luck with your appeal shyster.