Hardin is charged with three counts of rape, sexual abuse and kidnapping. He entered the plea during his arraignment before Benton County Circuit Court Judge Robin Green.


Rogers police obtained a warrant in 2003 for a "John Doe" suspect in the case. A John Doe warrant is an arrest warrant for an individual whose name isn't known. The statute of limitations for rape in Arkansas is six years, and the warrant was filed before time expired. Hardin's arrest came after DNA linked him to the case that's more than two decades old. The state obtained Hardin's DNA after he pleaded guilty to first-degree murder in October 2017 and was sentenced to 30 years in prison.

Hardin admitted last October to shooting and killing James Appleton, 59, while he sat in his pickup on Feb. 23, 2017.

The sample of Hardin's DNA matched DNA from the rape case, according to Rogers Police Chief Hayes Minor.

The rape occurred on Sunday, November 9, 1997 after the teacher left her classroom to use the restroom, according to an earlier news release.

The teacher "routinely went to her classroom on Sunday mornings to prepare lesson plans and tidy up her classroom for the upcoming week," the release states.

On that Sunday, some 250 people who normally would not have been at the school were attending a church service in the cafeteria.

About 11:30 a.m., the teacher decided to use the restroom in the teacher's lounge. When she exited the restroom a man wearing a knit stocking cap, sunglasses and was shoe-less wearing only white tube socks, brandished a pistol raped her and fled, according to the news release.

Rogers police obtained a warrant in 2003 for a "John Doe" suspect in the case. The statute of limitations for rape in Arkansas is six years, and the warrant was filed before time expired.

The 1997 case was frequently publicized in hopes of getting new information that would lead to an arrest. 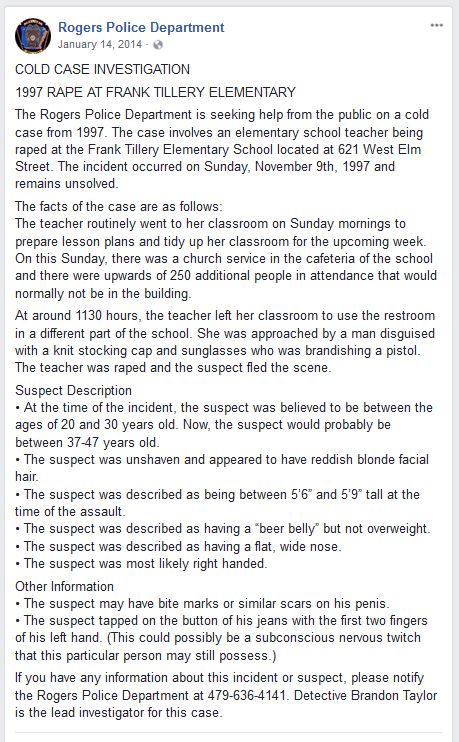 In 2016 then Minor, a captain with RPD at the time,  stated "It's safe to say that the suspect had some very perverse sexual habits that he liked that would be considered painful to most people...to the point where he instructed the victim to try and hurt him."

At the time of the rape, the victim was married to a Roger Police Officer.

She is now living in Oklahoma and was featured in a television news report after Hardin was arrested and charged in connection with the 1997 rape.


Hardin was being held in the Benton County Jail. The judge granted a request from Benton County Chief Public Defender Jay Saxton, Hardin's attorney, to allow Hardin to be transported back to the Arkansas Department of Correction.