Changes in Arkansas campaign fiance laws made it illegal for trusts and businesses to contribute funds to campaigns of judicial candidates. 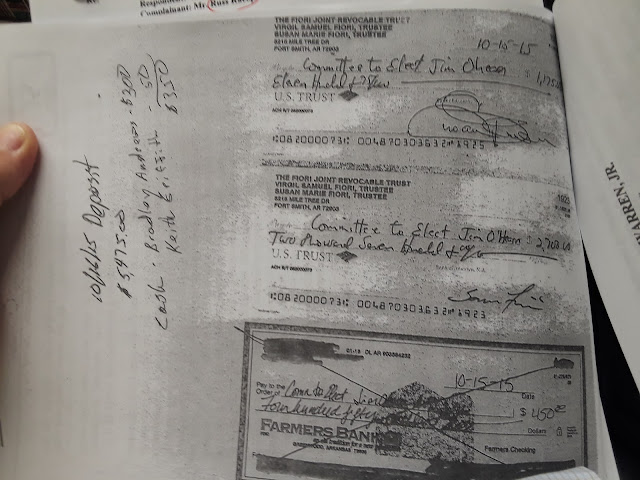 The Fiori's using their family trust made illegal contributions to O'Hern campaign. They also made separate individual contributions as to his campaign as well which were not in violation of Arkansas laws.

The change in Arkansas law required donations to be made by a "person" and a trust and a business do not fall under the definition of a person under the law.

The Commission found probable cause that O'Hern and his campaign treasurer Bill Warren violated A.C.A. § 7-6-203 by accepting the donations from the Fiori Family Trust and Sagley Properties LTD.

The Commission will send (and probably already has) an Offer of Settlement to both O'Hern and Warren. If they refuse to sing the Offer of Settlement (basically an admission that they violated  A.C.A. § 7-6-203) they might be fined and cautioned not to commit such a criminal offense again. If they refuse, they can request a final hearing or the Commission will set a final hearing if the letters are not returned within 10 days or the scofflaws do nothing.

The Commission can also refer the matter to other law enforcement agencies, but the Arkansas Judicial Disciplinary & Disability Commission has an on-goin investigation of O'Hern at the present time.

A finding that O'Hern violated the law could result in O'Hern's removal from the bench which complied with the scandal with him and his now felon prostitute, meth using girlfriend or ex-girlfriend.

Commission attorney Jill Barham told Commissioners that the complaint against Warren was a first for the Commission as usually complaints are made against a candidate, but that the statute states that "It shall be unlawful for any candidate for any public office or for any person acting on the candidate's behalf..."which would include Warren.

The Commission took pity on the Fiori's and thought that the change in the law "messed them up" and dismissed the complaints against them.

The letters sent to the Fiori's can be viewed by clicking here.